Why the Hampta Pass should be your first Himalayan trek 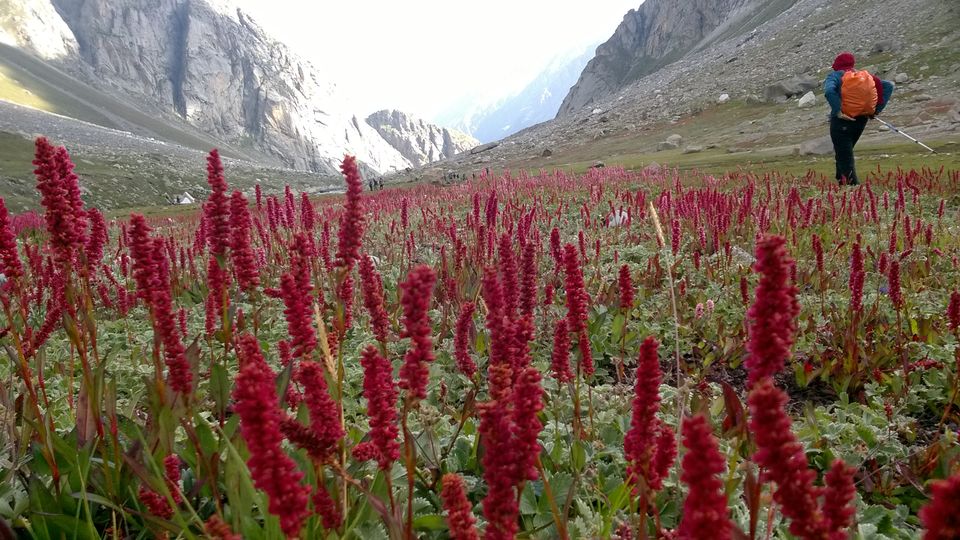 It was some two years ago that I decided that I felt the urge to travel through the Himalayas. I have been trekking for a number of years but the thought of trekking there languished in the dusty lanes of wishful thinking.

This time around, I decided to act upon the idea and contacted a few friends who were already into trekking. But the idea to join them never materialised as words like ‘fitness’, ‘mountain sickness’, were thrown at me. My plan fizzled out, remaining thus for another six months.

I was fitter, well read about the risks, and had to now get down to the decision of choosing my first. I was in a quandary of gargantuan proportions. The problem was of choice - a ‘multi-optioned, equally attractive, abundant options’ kind of problem.

It was a long, well-thought decision and a tremendously amazing one, in hindsight. If you need help making your decision, you might want to read about how to make your pick, here.

I chose the Hampta Pass for what it is, an amazing potpourri of everything that one can ask for in a Himalayan trek - lush green meadows, glacial rivers, snow bridges, a desert-ish track, ice - cold river crossings, tall pine forests and the thrill of a lifetime. There are really no words to describe the feeling one gets from admiring an entire valley from what can be best described as an overhang, especially from one that’s at a staggering 14,000 feet.

The trek goes a full circle, starting from the green locales of Manali, to the cold barren Spiti and back to square one.

The Beas, flowing through the heart of Manali 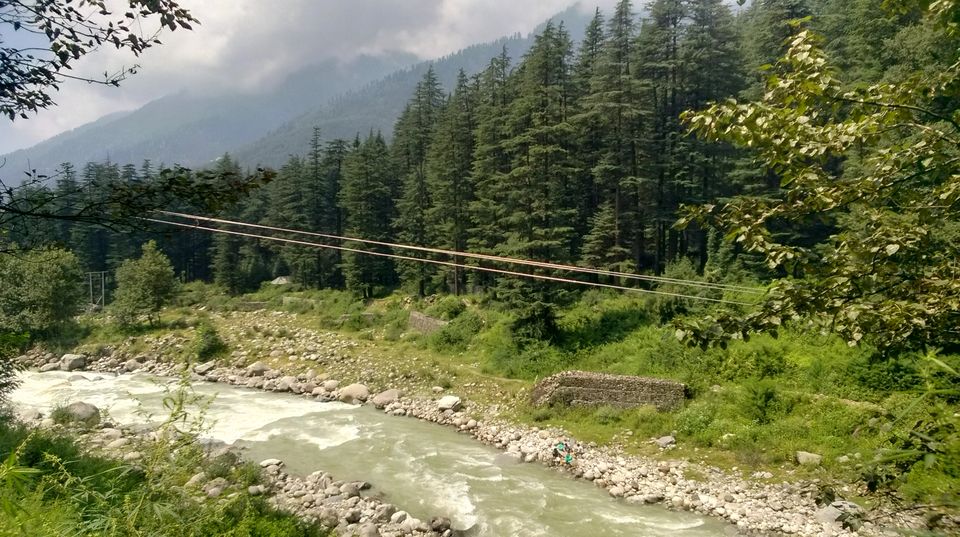 The drive to the first campsite, Jobra, lasts just over an hour taking you up the valley, with numerous hairpin bends (some really steep) with some occasionally sightings of apple orchards, right on the road.

The campsite at Jobra is a short hike through a thick pine forest. As the trees cast their shadow over the trails, the weather remains pleasant even in bright sunshine. With the thundering Rani river right on your trail, it seems just the perfect setting.

The Rani nallah in its full pristine flow 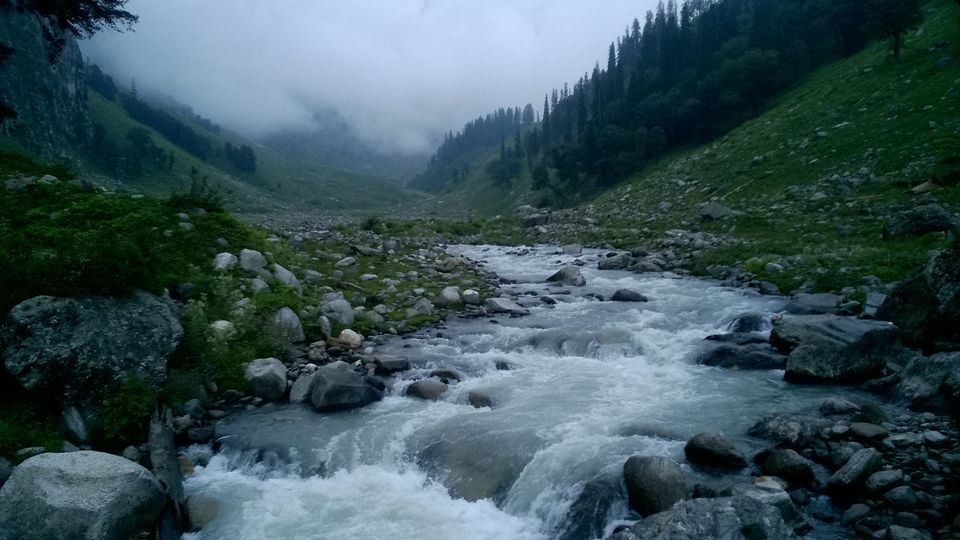 The campsite is set on the meadows next to the pine forests with the Rani right next to it. The river gushes heavily during this season with the snow melting high up in the mountains adding generously to the flow. On the other side of the river is a huge rock face towering over you which brings the day to an early close blocking out the sun early in the evening, even as the fog starts drifting in. 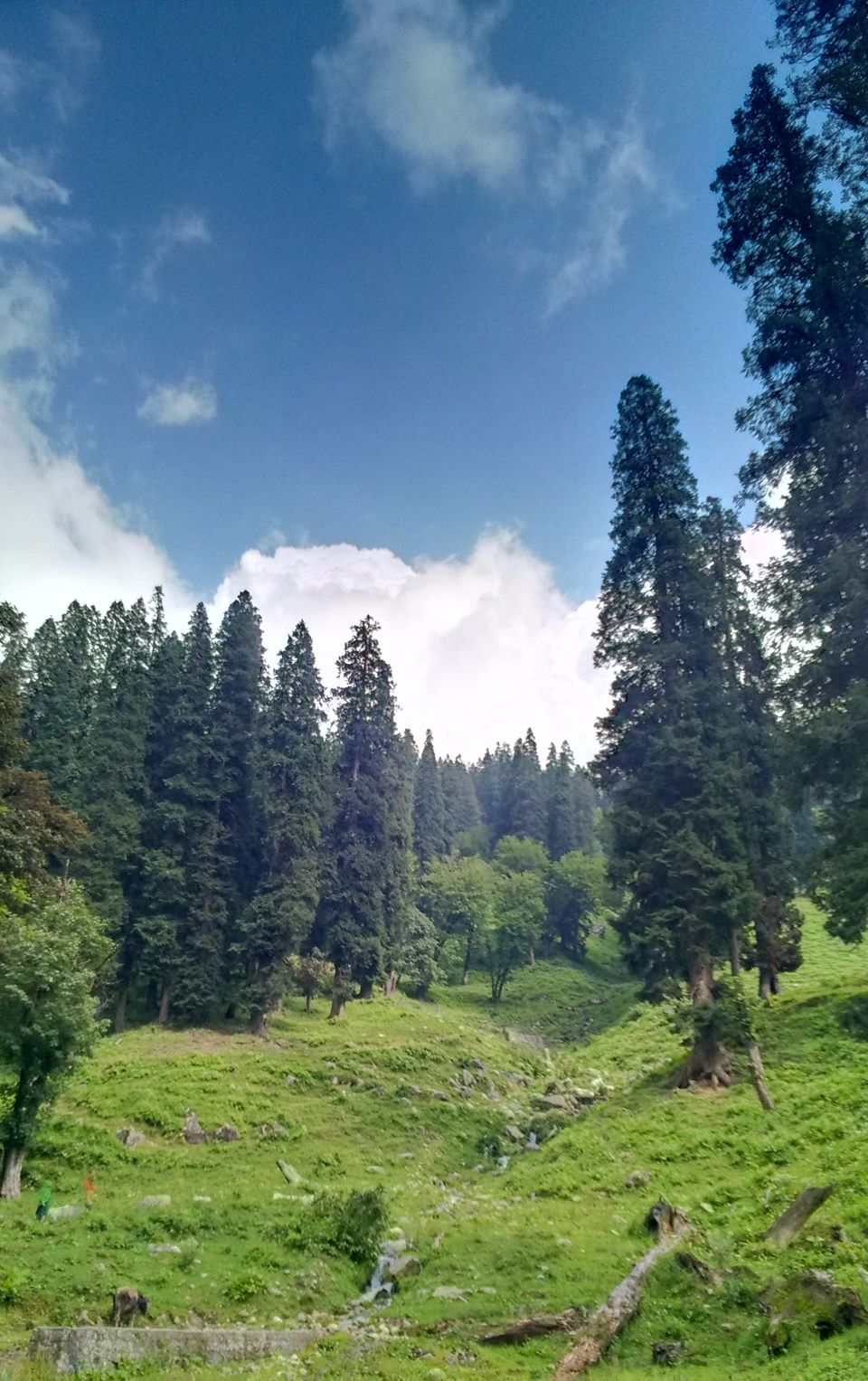 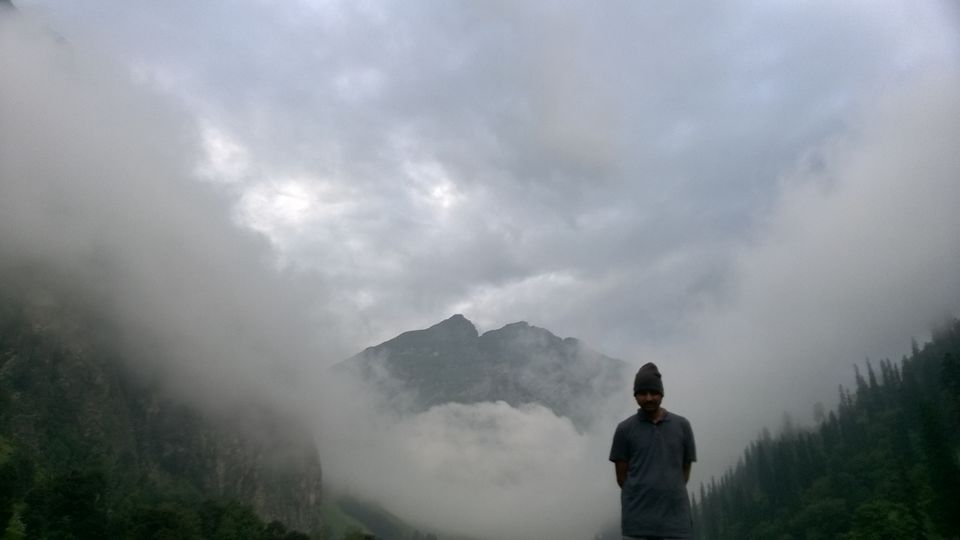 The next day begins with a steady climb from the other side of the river. The view is as amazing as ever, with the valley widening enough to afford you some of the grandest views of the forest on the other side.

Valley, trees and a beautiful river gushing through it. What more can a trekker ask for? 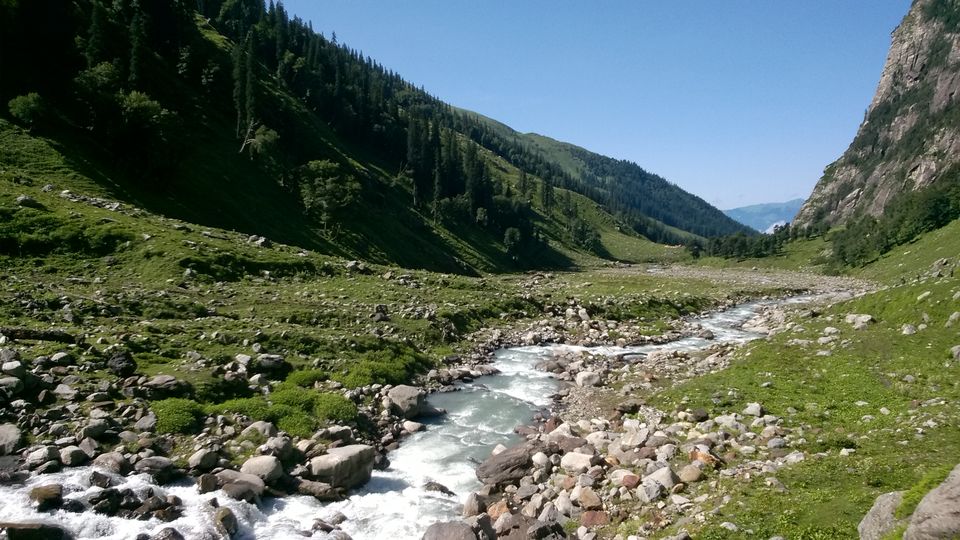 The trees don't look so tall, the mountains don't look as imposing...until you see the tiny tents in the distance 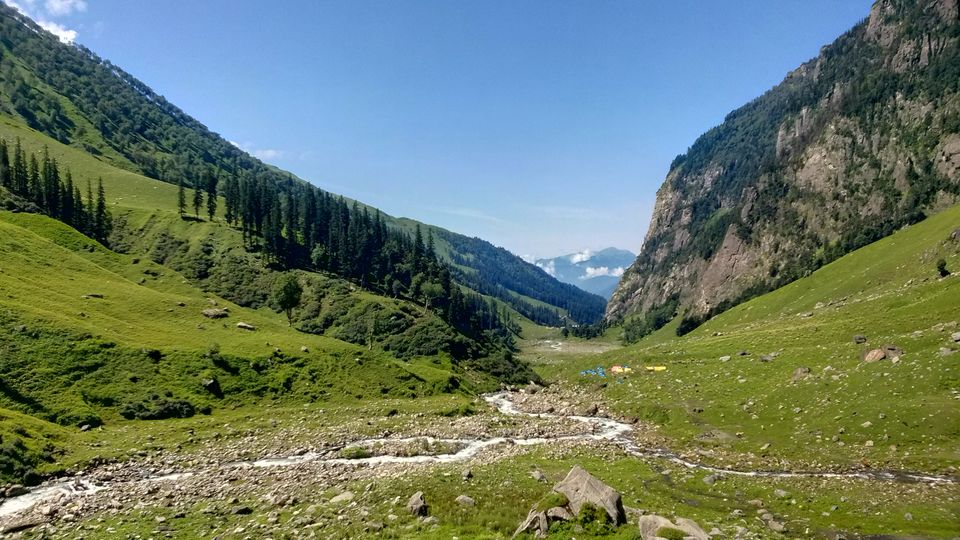 One of the stony sections has you swiftly cross a waterfall which is only an interlude to the surprise what comes soon after. Seemingly usual at first, excitement racks up as it hits you that the only way forward is crossing an icy cold Rani river, barefoot.

Can you feel the chill? 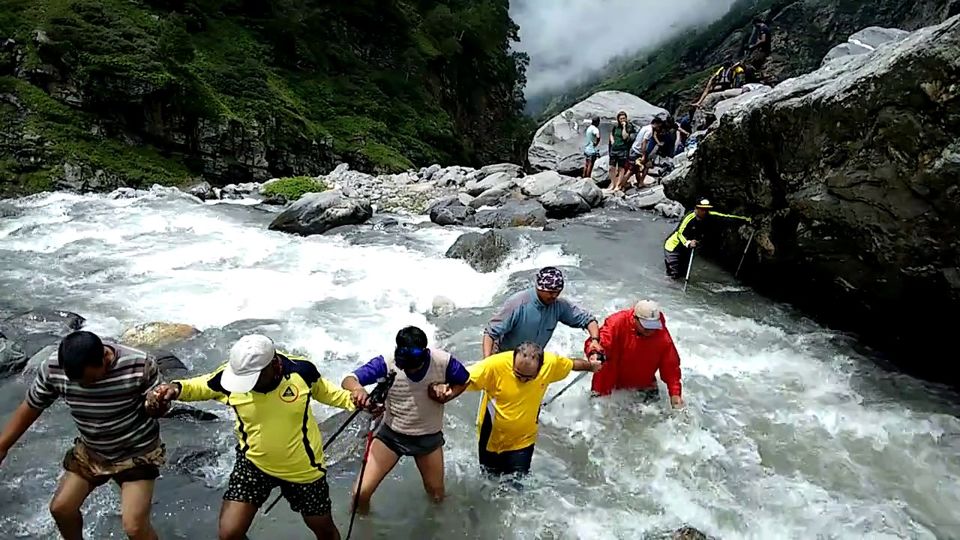 Brrr! Even thinking of it gives me chills. Soon after, you camp at the Jwara meadows which is a spectacle no less. 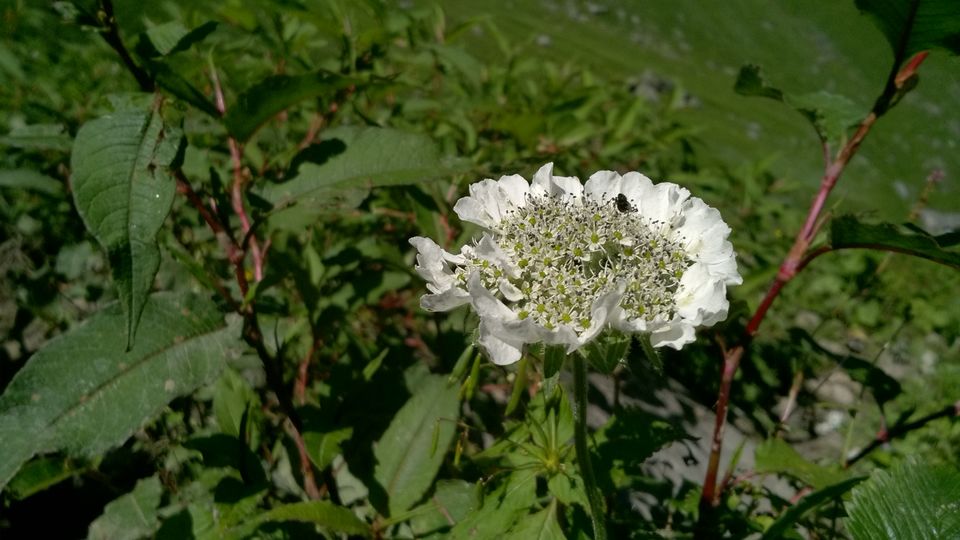 Flora near the campsite 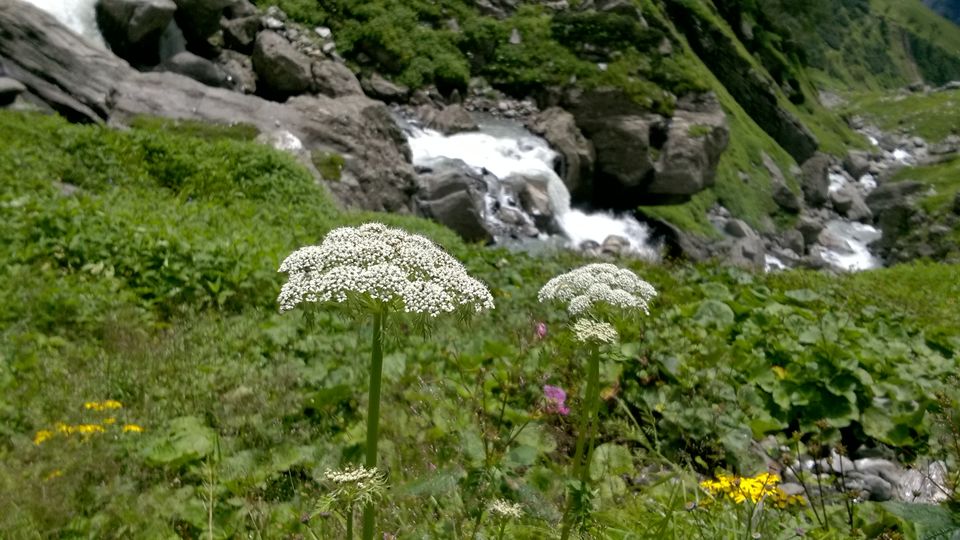 Camping right next to a bed of flowers 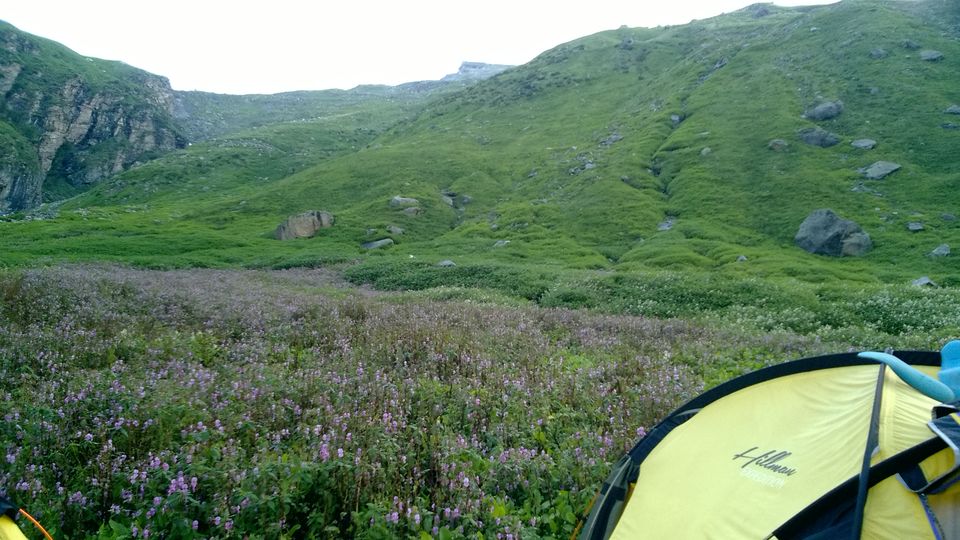 The next day trek to Balu ka Ghera is much easier and shorter, perhaps to accommodate and rest the body for the arduous pass crossing the next day.

The clouds smiling at an 'easy' day 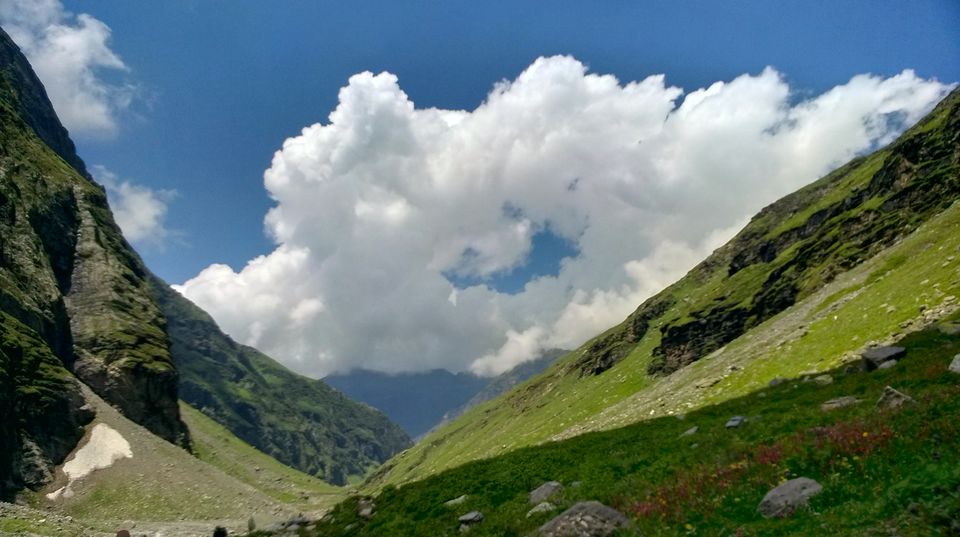 While this day seems mundane, you’ll notice the subtle change in scenery. The lush green meadows give way to a rather stony terrain. Where you could see flowers every other step you took, it now appears in patches.

Notice the gradual change in scenery 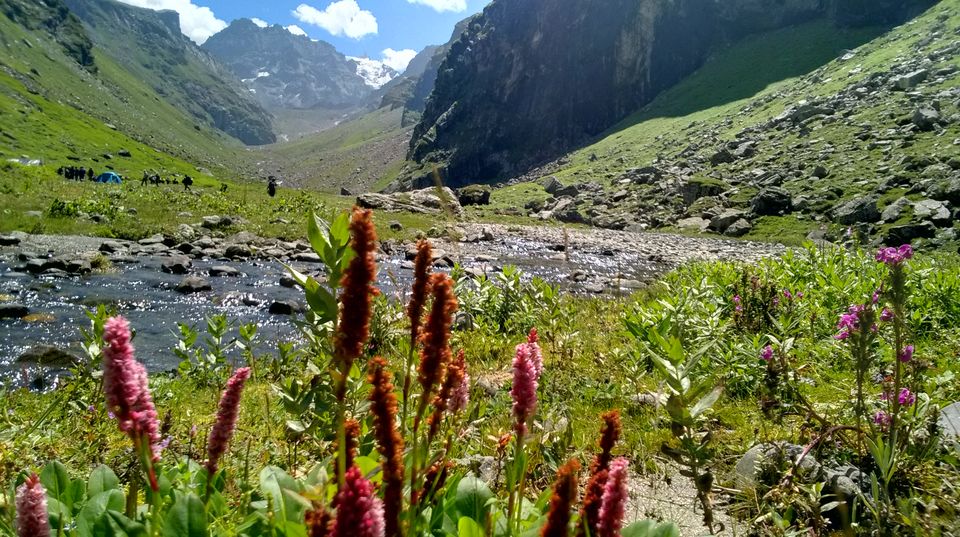 In many ways, Day 3 is a chameleon, seemingly draggy, but it places you at the edge of the precipice of change that will slowly unfold in the rest of the trek.

The campsite at Balu ka Ghera is next to a river delta, enclosed by a sheer rock face on one side and a hill on the other. At this altitude, the fog rushes to enclose your campsites early in the evening and the nights begin to get drastically cooler.

The next day takes you to the top of the world and back. Barely an hour into the trek, you’ll most likely find a huge patch of glacier (even late in the season) which you’ll have to cross. 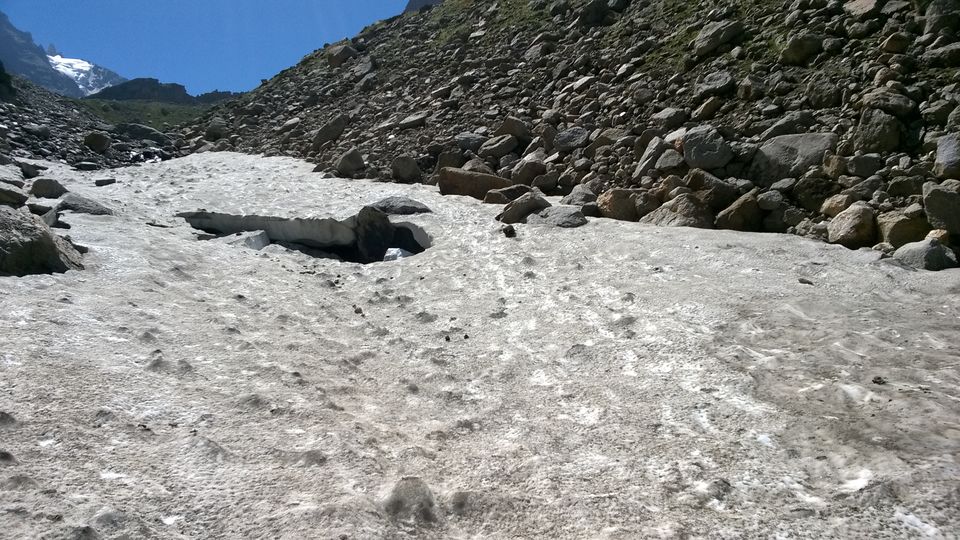 The climb gets steeper after this part. The climb to the top is not as difficult as the descent. While not easy, the climb is totally worth the time you spend at the pass overhang.

The long days of trekking, sleeping in tents, and your efforts, all culminate towards this moment. At 14,000 feet, it grants you a spectacular panoramic view of the landscape and the Lahaul valley. Some of the peaks that you’ll see from the pass will be snow clad even late in the year.

View from the pass overhang 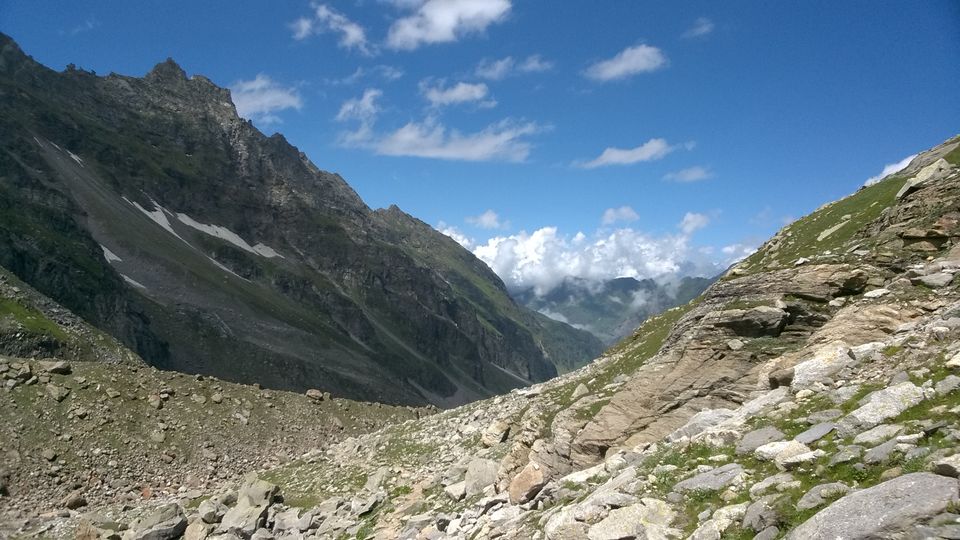 View of the entire valley from the pass overhang 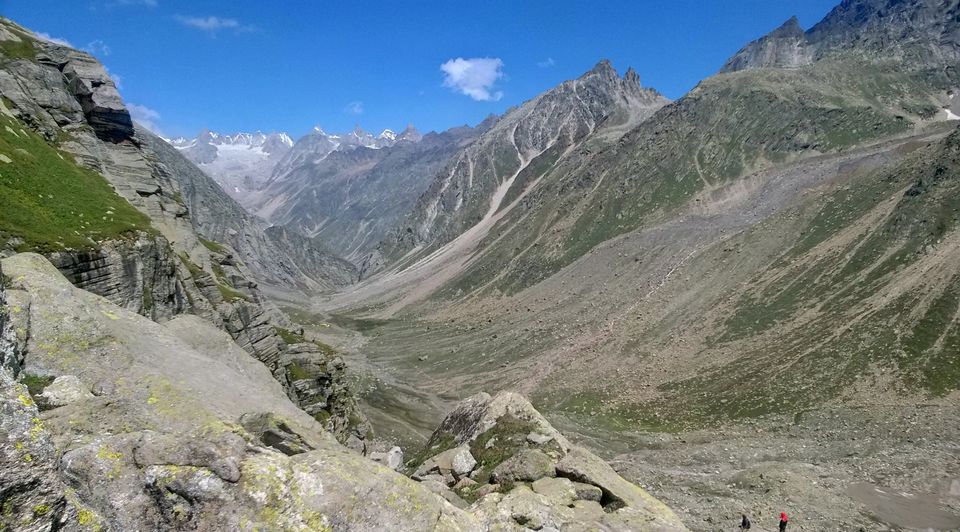 Just before you begin your descent, you’ll see a huge outcrop of rock that can only be described as the perfect location to snap your next screensaver. The decent looks dreary but easily achievable if you maintain a firm footing at all times. After you reach the base of the valley, it is fairly straightforward, flat walk to the Shea Goru campsite.

This is a panoramic campsite with splendid views all times of the day – to a photographer’s extreme delight. 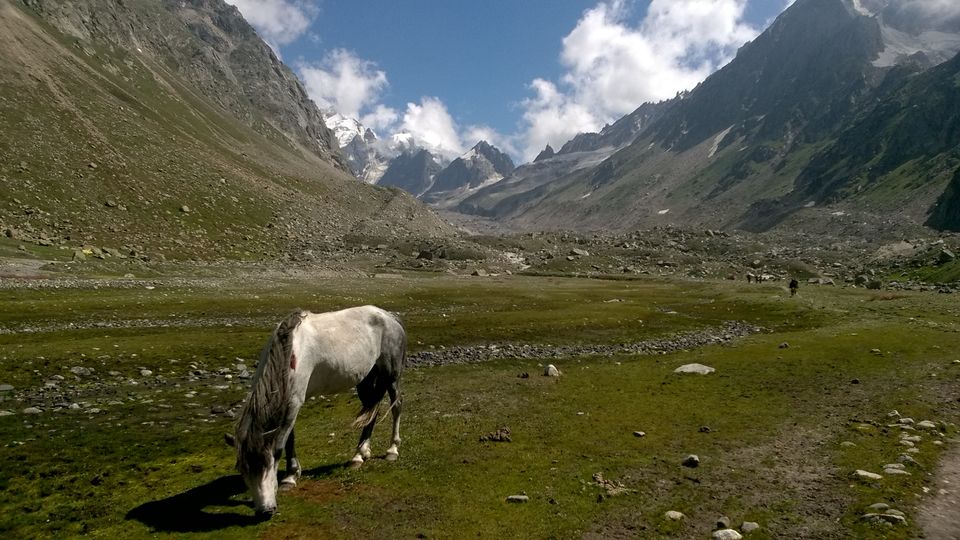 The fog engulfing the pass where we were 2 hours past 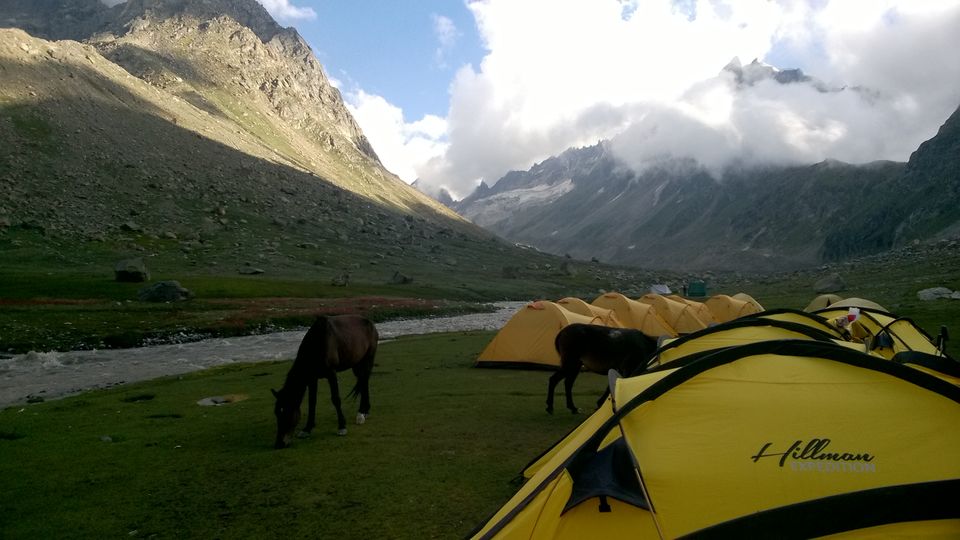 The next day is a flat or descending trek down to the Chhatru campsite.

A bed of red wild flowers enroute to Chhatru

Although unexciting compared to the last day, you can, if time and road conditions permit, drive down to Chandratal (moon lake), another dramatic natural landscape to revel in. 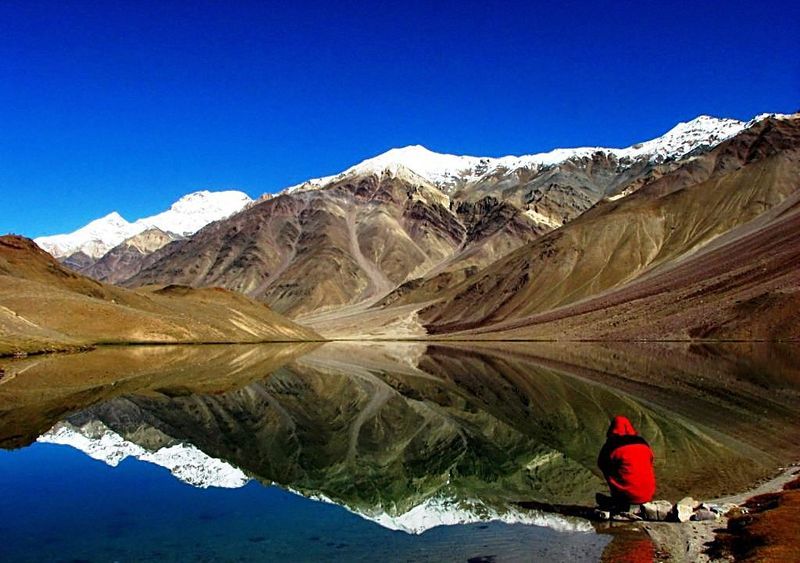 Drive back to Manali the following day via the famous Rohtang Pass and you’ll wrap up one of the best weeks of your year.

I deem any activity to be successful if it makes you want to go back for more. Well, by that measure, the Hampta Pass trek is a superstar!