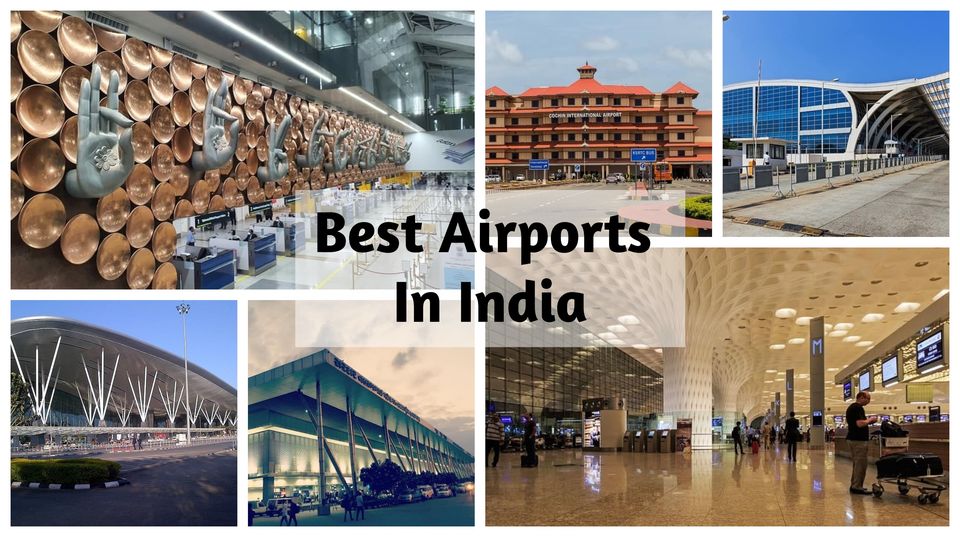 India has many best Airports making it the third-largest domestic civil aviation market in the world after the USA and China. There are a total of 449 airports located throughout India. In which 100 airports/aerodromes receive regular commercial flights, 123 airports with scheduled commercial flights including some with dual civilian and army use.

A total of 125 airports which includes 11 International Airports, 81 Domestic Airports, 08 Customs Airports, and 25 Civil Enclave at Defense Airfield are managed by the Airports Authority of India (AAI).

Airports don't only connect cities and towns but also play a very significant role in our journey as they make our journey easier and comfortable. With luxury travel slowly becoming affordable to the middle class, air travel has seen a never-before-increase. This has promoted India's tourism and hotel industry and has strengthened its economy.

So, here is the list of 10 Best Airports in India.

It is named after our former Prime Minister Indira Gandhi. It is spread over an area of 5,106 acres.

- Terminal 1- It is used by low cost carriers like Indigo and Spice Jet.

- Terminal 2 - Currently it is used by Go Air and Indigo to operate their daily flights.

CSMIA Mumbai is the busiest and one of the best airports in India and formerly known as Sahar International Airport. It is located in Andheri, 8 km north of downtown Mumbai.

This airport has 2 passenger terminals, T1 for low-cost domestic flights and T2 for international domestic operation. This is spread over the total area of 1850 acres.

It can easily handle more than 950 aircraft moments in a day. It was awarded as "World's Best Airport" in 2017 for handling more than 40 million passengers annually and it also won the title of "Best Airport in India and Central Asia ".

It's easy to reach there by any public transport. It always provides the best services to its passengers.

Besides Delhi and Mumbai Airports, Kempegowda International Airport is the third busiest airport in India. It is located in "Bangalore", Karnataka.

This was the first fully solar-powered Airport established in Karnataka. It is spread over the area of 4,000 acres.

It is the 29th busiest airport in India. It handles over 658 aircrafts moments per day. This airport is voted as the "Best Regional Airport in Asia and Central India." This airport is named in the honor of the founder of Bangalore "Kempe Gowda."

Some of services and amenities available at Kempegowda International Airport

After Delhi, Mumbai, Bangalore, and Chennai airports, it is the fifth busiest airport in India.

It handles over 20 million passengers every year and spreads over the total area of 1,641 acres. Kolkata airport has two parallel runway - Primary runway and Secondary runway.

The airport was awarded as the " Best Improved Airport" in Asia -Pacific region in 2014-15.

It is located in "Shamshabad" which is about 24 km away from the City of Pearls -Hyderabad. This airport is named after our former Prime Minister "Rajiv Gandhi."

It is the sixth busiest airport in India. The airport has one passenger terminal and a cargo terminal.

Rajiv Gandhi International Airport is the only airport in India which is in the top 10 of Air Help's list. The airport is spread over the area of 5400 acres and handles over 40 million passengers annually.

The airport is located in Hansol, 9 km north of central Ahmedabad. The airport is a hub for TruJet and it is named after "Sardar Vallabhbhai Patel".

Some services available at Sardar Vallabhbhai Patel airport are:

Cochin International Airport is the world's first fully solar-powered airport, it has one of India's largest terminal (Terminal 3) and also awarded as "Champion of the earth" in 2018.

The airport is located in Pune, Maharashtra. It is the ninth busiest airport in India. It serves both, domestic and international flights. It is located 10 km northeast downtown, Pune.

The airport handles over 8 million passengers annually and it has two terminals, but only one is used for flights. The new terminal and runway expansion will be constructing soon.

Amenities available at Pune Airport are-

The airport is located in Goa, 30 kilometers away from the state capital Panjim. The airport handled over 7.6 million passengers in 2017-18. It is spread over the total area of 688 acres.

In December 2013, the airport's integrated terminal building was constructed and it handles both domestic and international flights.

Amenities available at the airport are: