A crazy road-trip to Chikhaldhara

By A couple of adventures

There we were, eating each other’s brain on the best places to head on a ride to at a minimum distance of 500 kms (one way) and get away from the city’s hectic pace. We were confused between Omkareshwar, Mandav and Pachmarhi in Madhya Pradesh. Everyone who got to know about our upcoming weekend trip advised us against traveling in the heat and facing the tough election crowd in MP. Sourabh was set on travelling to Pachmarhi and I was tied between Mandav- a city of ancient ruins and historical significance, and Pachmarhi-a beautiful hill resort in the Satpura ranges also known as ‘Satpura Ki Rani.’ Finally, after a lot of debate we got to a common conclusion and began preparations for the 1800 km roundtrip over the weekend to Pachmarhi. Our plan of action was to leave by 8 on Friday evening after work and reach Pachmarhi by 11 am the next day. It was to be just the two of us so we were ensured of minimum delays due to our disciplined style of riding. Fortunately, Amit Nikam from Amravati gave a call to Sourabh and suggested Chikhaldhara- a hill station in his district and kindly offered to cancel his own plans to head to Pachmarhi. He was gracious enough to suggest a good place to stay in Chikhaldhara and show us around the area over the weekend.

Sourabh has spoken to the locals and they advised us to ride to Chikhaldhara from Akot instead of Akola as the two lane roads were moderately decent and we could save a few kilometres from our ride. As we approached Khamgaon, we decided to give Amit Nikam a call and inform him that we would be reaching our destination in a few short hours. A sleepy Amit told us to slow down our journey. He informed that he would take some time to leave as our earlier estimated time was way later that our estimated arrival time of now. We could clearly understand his predicament; we had already met quite a few people who were flabbergasted at the pace of our journey.

We crossed Shegaon and Akot at a speedy pace and then I heard a voice filled with trouble mumbling through the Sena. Sourabh was feeling uneasy and we couldn’t find a tea-stall for a quick sip of refreshing tea. We managed to find a place to rest outside a school in Anjangaon. 25 minutes of nap time while I watched the sun light up the sky. Finally, shook Sourabh awake out of sheer boredom and gave a call to Amit Nikam who informed us that he had an issue with his motorcycle and would take some time to reach. We decided to ride on towards Paratwada and wait there for Amit.

A quaint resort overlooking the hills greeted us. It was sunny but windy at the same time even though it was 8 am in the morning. Sourabh mentioned that it seemed like it was daylight of 11am at 7 am. We decided to freshen up, grab some sleep, have lunch and head to Melghat Tiger Reserve. The rooms were quite spacious and had coolers installed. The beds were comfortable and the bathrooms clean. Delicious Waradhi Chicken, Paneer Bhurji and Dal Tadka are what we attacked out of sheer hunger. Three hot cups of tea and we were all set to ride to the forest reserve.

This Safari made our decision of purchasing our very own Gypsy even stronger as this vehicle was taking us through every up and downhill climb and dirt route with ease. We got done with our safari at 7 pm and had to rush back through the dark forest to greet Roshan before he rode in. We were all dead tired! It was time to sleep and we struggled slowly into our rooms at around 2 am in the morning. It was lights out time. We heard about a famous dhaba in Paratwada called ‘Punjab Rao Patil’. It was famous for Waradhi Chicken and how could we miss out on a famous delicacy authentically prepared.

After lunch, we stopped at a mechanic who replaced the plug for us with the right tools. We bid a fond goodbye to Amit and Roshan and thanked them for their wonderful company and warm hospitality. It was truly sweet of them to ride all the way to Chikhaldhara to spend time with us. We were sorely exhausted. We were riding at a speed of 70 kmph and sleep was overpowering us due to the slow pace. We had now been riding for 5 hours and had crossed Khamgaon. We stopped at a dhaba for a nap but decided not to eat.

We were 200 kms away from Dhule. By the time we were in the district, it was 1.30 am in the morning. Luckily, Sourabh’s relatives resided in the city and so we crashed at their home for the night. They were very happy to see him after ages and were very sweet to us. We slept off immediately and woke up early the next day. After a meet and greet with all the relatives and a quick cup of tea, we were off again in the direction of Narayangaon.

We kept on riding at an average speed of 80 kmph. I even took a video of Dhanno being towed from my Iphone 4S. Eventually, we reached a deviation which would take us through a route which was covered with gravel and dirt. Sourabh took Incognito ahead gingerly while I balanced Dhanno behind him. Unfortunately, the tow rope wedged and started wrapping itself on the front disc brake and speedometer cable drive and I shouted at Sourabh to stop and broke a fall with an impact on my right leg. My knee took the brunt with a sprain but luckily, the motorcycles did not fall which I was glad about. And this ended a 100 km long towing spree. The speedometer cable drive was crushed into smithereens! We untied the tow rope and moved on ahead praying that this should be the last of a series of unexpected events. The only time we made a stop was to drink Neera (Palm tree) juice from a highway stall and relentlessly pushed our way to Sourabh’s hometown. Sourabh even pushed Dhanno on uphill climbs with his foot which was commendable.

We had a grand time after a torturous ride. Played cricket with the neighbourhood children, talked a lot, took a family nap together in one room which was super fun, Sourabh’s mom made an attempt to groom me by combing my hair which was a daunting task after a ride. We woke up early in the morning, and bid our goodbyes after a strong cup of tea. Luckily, Dhanno did not give trouble on the way back. We headed directly to our workplaces and got on with our work as if the last three days of adventure never even happened.

We set out from Pune at 8 pm, I was apprehensive about the traffic as heavy trucks and trailers slow the Ahmednagar route at night. I had promised myself to avoid eating as I did not want to fall asleep while riding. 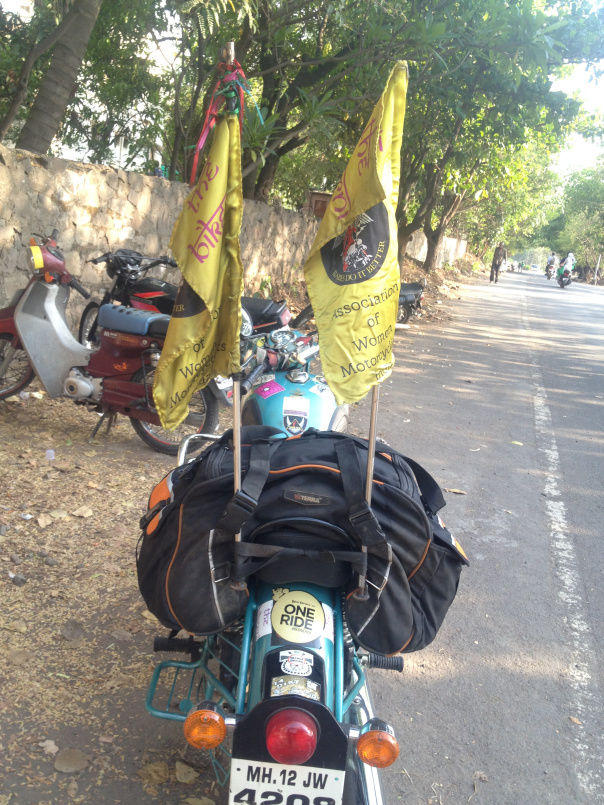 We stopped a bit ahead of Smilestone Café, Ahmednagar Road to refuel our tanks just before the petrol was set to get over. We did not have time to refuel as we were stuck at work during the day. A fresh, light breeze was blowing in the night and our respective club flags were fluttering gaily. 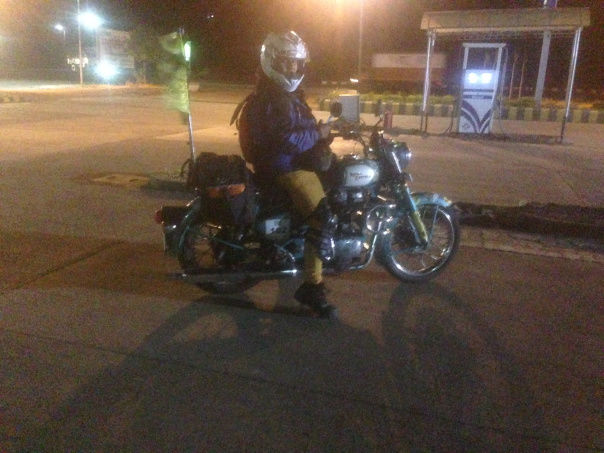 We spotted a rustic, vegetarian dhaba called ‘Deluxe Dhaba’ and attacked the food as soon it was served. Dal Tadka and Shev Bhaji, (a famous local Maharashtrian dish) was our nourishment for the night. After a few quick cups of tea, we set off again at a steady pace. 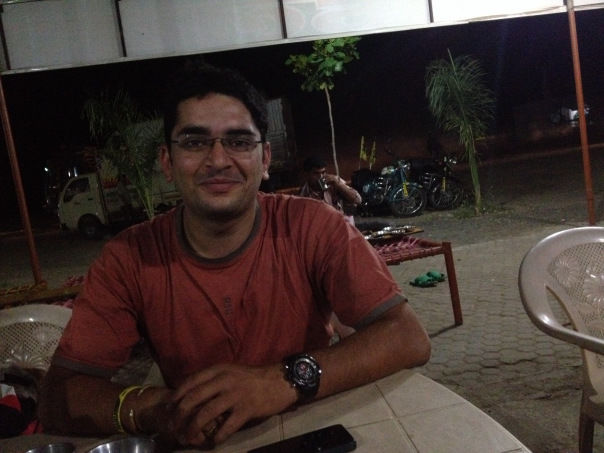 We stopped at a place called Chikhali for Sugarcane Juice (Can you believe it?) at 2 am. Curious night-bus travellers scanned us and our respective motorbikes and then we saw a policeman trudging towards us. I wondered why he wanted to speak to us. He asked us where had we had ridden in from. We explained to him (and the curious listeners surrounding him) that we when we ride together, we rarely take long breaks and are used to riding at a non-stop pace. 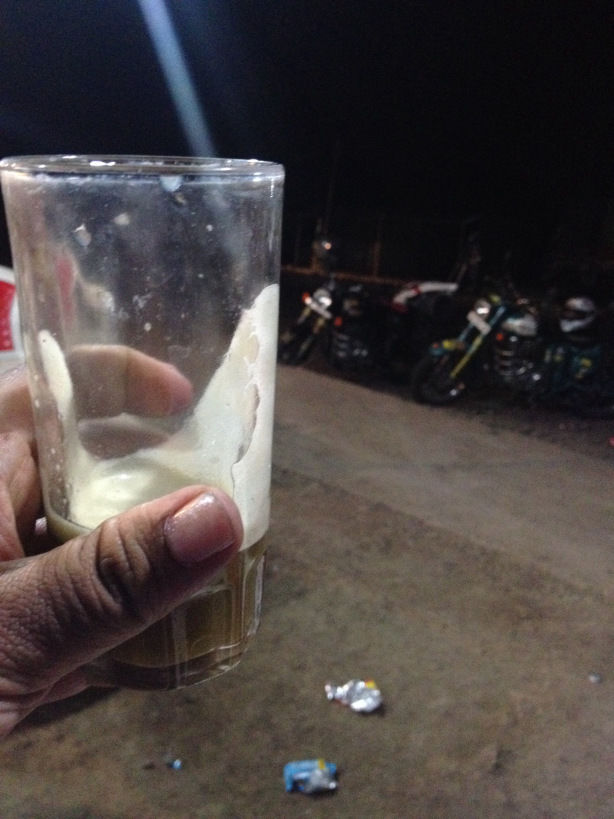 We reached Paratwada and crashed under a tree in a field by the road side. We waited patiently for an hour even though we were excited to head towards the hill station. 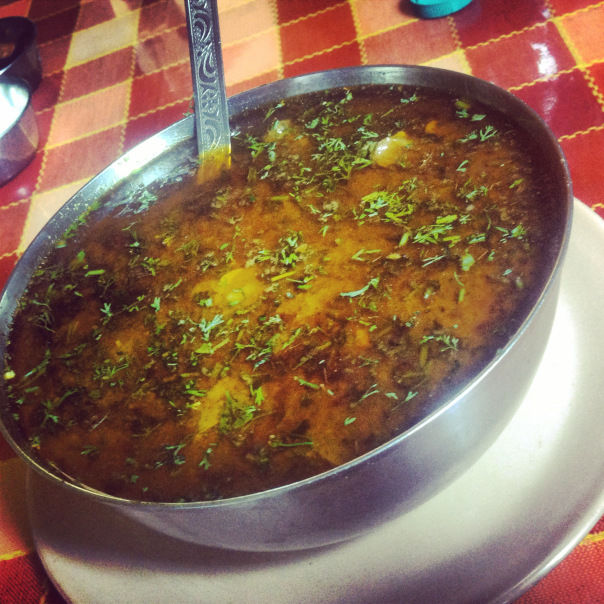 It took us an hour to reach the forest office for reservations. We booked a safari jeep with an open top. We had a talkative and informative guide with us who knew his way around the place. The Safari started at 5 pm and we weaved through the forests filled with dry vegetation and tall trees. The first wildlife we had a glimpse of the regal Sambar stag and then a group of white Langoors as well. 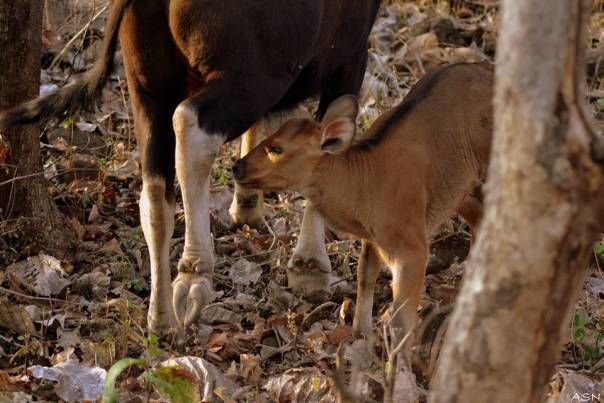 It was certainly an amazing ride to Chikhaldhara and we got to know how good a team we could be. It was great to meet friends and spend time with family as well. 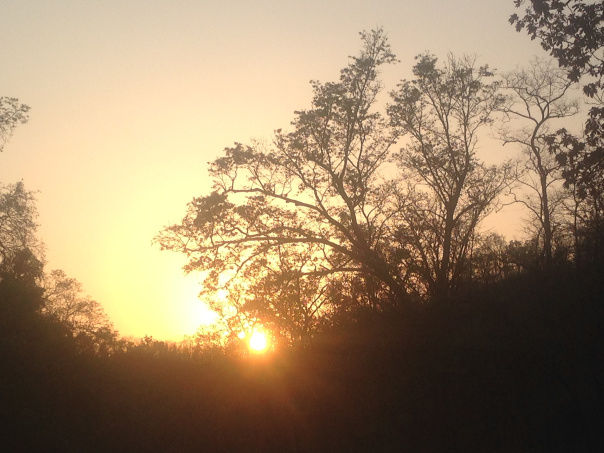