Since childhood the stories related with one animal that inspired awe and fear was tiger. From “tiger tiger burning bright, in the forest of the night” to the gory tales of man-eaters of Kumaon, to the anxiety of the world to save tiger, everything created an urge in me to see this majestic cat in its own habitat away from the confines of a zoo or a tiger safari. One of my friends, who is a keen tiger watcher and a regular visitor to Jim Corbett National Park in Uttaranchal invited me to join him for a rendezvous with Mr. Stripes.

The Corbett National Park is located in the crop rich terai region of the state of Uttaranchal, straddling the undulating Shivalik foothills of the Himalayas. It also has the distinction of being India's first ever national park established in 1936 following the advice of the hunter-naturalist Jim Corbett. He acknowledged the tiger as "a large hearted gentleman with boundless courage.”  Of the nearly 50 mammals, 580 birds and 25 reptile species that have been listed here though, the jewel of the Corbett is undoubtedly the Indian tiger. It was estimated that in 1984, the tiger population in the Park was 90 which today stands at 144.

The SUV took to the road as eagerly as it could. In no time we crossed the sleeping town of Hapur. The truck graffiti kept us amused and in splits till we saw one AZAD PANCHCHI carrying chickens packed like sardines to the slaughter house. Soon this somber streak was broken by the pungent smell of molasses engulfing all of Sambhaoli and surroundings. Sambhaoli has a big sugar factory that continuously spews acrid gases into the atmosphere. Further on, near Garh Mukteshwar, we paused briefly to pray at the Brij Ghat on the holy Ganga. With renewed vigour we hit the road to reach the Peetal Nagri (Brass City) of Moradabad. We had covered a distance of 170 km. It was time to top up the car once again. Instead of taking the bypass we drove through the city and halted at a filling station only to find that the station attendant was dead drunk but mercifully was helpful. After the refill and a hot cup of tea we were once again on the road which gradually became narrower and less comfortable.

Corbett, however, turned out to be everything I could have hoped for and more. There was breathtaking beauty, heart-stopping thrill, and some incredible stories. Encountering the king of the jungle -- not once but twice! -- became the story we will never tire of telling. Nothing mattered more after what we had experienced. When we left the Park to take the road back home, we were reassured in our hearts that there is room in this world for the tiger and us.

The stars had started fading. We lowered the window panes to see breathtaking scene of dawn and lush green paddy fields resembling a big, large billiards table interspersed with the yellow of mustard fields. Just after 4 hours of the great drive, we reached the last town on this journey. Ramnagar is the administrative and communication hub for Jim Corbett Park and Project Tiger. We reported at Aam Danda Gate of the Park, hired a guide and went straight into the Bijhrani jungle not bothering to check into our guest house at Khinanauli. Our guide Chandan Bisht took us to places where tiger sighting was possible. All that we got was to hear the roar of a tiger! However, this trip was rewarded by lovely sightings of barking deer and a wild boar with tusk. The barking deer, a very elusive and shy character obliged us with a studio shoot like opportunity. The wild boar tusker has amazing prowess and is known to take on a tiger also. We wound our way up to Malani guest house just 14 km from Bijhrani. It makes an ideal wildlife sighting spot around its water source. The twisted road was rendered tricky by recent rains. But fortunately a former rallyist was behind the wheel of our ever surefooted SUV. We spotted a herd of spotted deer, a barking deer and several birds. 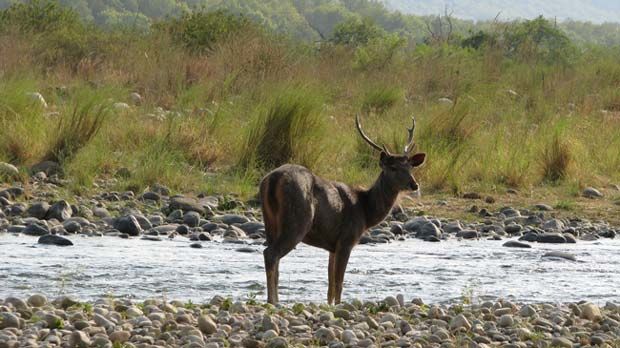 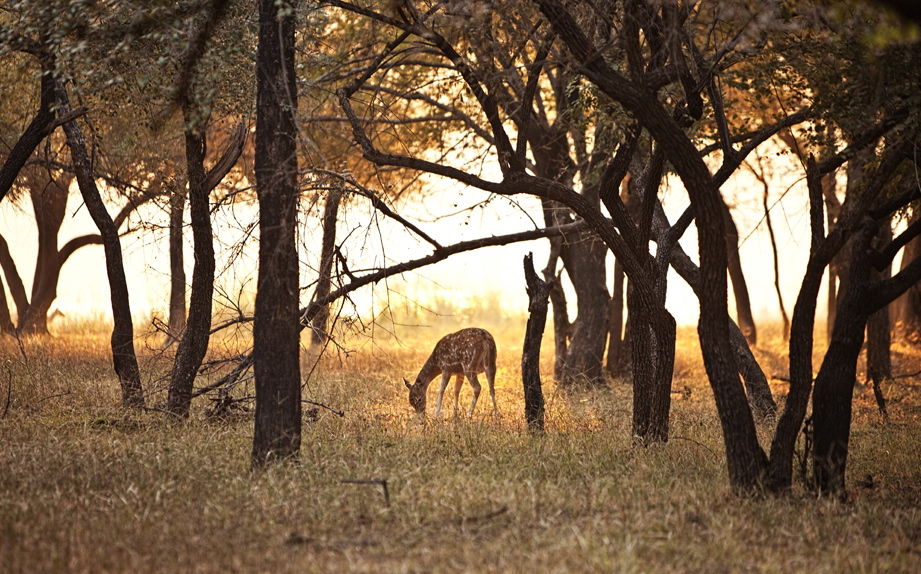 Following the morning jaunt, we returned to Ramnagar around mid day to collect our permit to stay in side the Park at Khinannauli, preferring it to the more populated Dhikala. The 25 km drive to Khinanauli via the Dhankhedi gate turned out to be a memorable short jaunt. We drove through the rain washed pristine and scented saal forest crossing several sots which are the fresh water channels that ultimately tumble into Ramganga the principal river of the Park. We made several interesting forays to High Bank Point to see a fully grown gharial, and the Champion and Ram Singh roads in search of elephants. We reached Khinanauli at about 2pm barely in time to get ready for our first elephant ride of the trip. Astride Mohini a young elephant of 28 years, we rode into the forest. Our mahout, Nayab said sighting of a Red headed vulture, earlier known as the king vulture was considered auspicious and raised hopes of tiger sighting. Three more groups joined in this ride. The mahouts surveyed the soft sands to pick up fresh pugmarks and decide a trail worth following. They were all ears for the warning cries of animals let out on seeing the tiger. One of the elephants noticed a tiger in the lantana bush and signaled to the rest. All the four mahouts guided their elephants with rare agility and excitement. Suddenly a tiger, in fact a young tigress leapt out of the elephant grass and fiercely growled at us. It was my moment! I was struck by the sheer beauty of the animal, its shining coat, sinewy build and fire in the eyes. The elephants were moving and turning fast making it difficult to hold on to the houda let alone take some pictures. All I could manage was three pictures of the tigress that soon escaped taking advantage of the terrain. 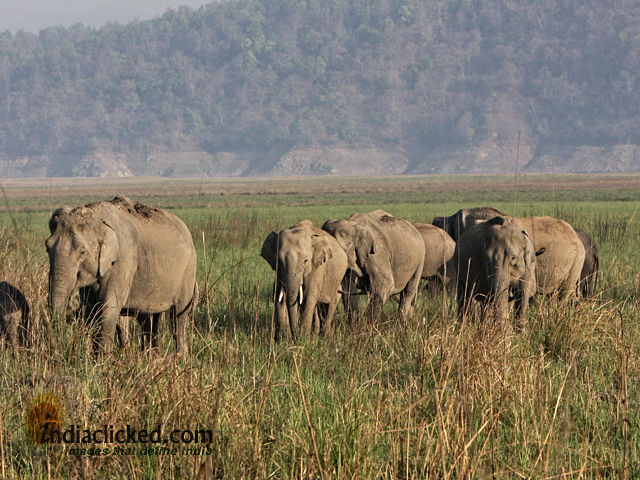 While we were settled for lunch at Kallaji’s dhaba in Dhikala after leaving Khinnanauli, my friend proposed a visit to Gairal, a less frequented and difficult to access forest of great beauty. This was to be the highest point of the trip! On the way we stopped at Jhirna Jali, another view point for crocodiles and gharials. Leaving the gharials to their siesta on the sandy banks of the Ram Ganga we resumed our journey to Gairal until I spotted a sambhar deer standing on a rock in an awkward posture. I had my camera ready to shoot, when it suddenly let out a call followed by another and yet another as if to warn the whole jungle of some hidden danger. Its tail was up and right foot stomping the rock. Petrified it stood glued to the rock looking across the river. Certainly our presence could not be the reason for its anxiety. The call was echoed by langurs, a confirmation of the movement of a skilful predator. From the SUV our eyes darted in all directions and froze at the sight of the black stripes on orange-yellow coat emerging from the tall elephant grass on the other bank of the river. The fully grown male tiger looked around and stepped into the river. The adrenalin was pumping hard. One eye at the tiger and the other on the view finder, I kept shooting the maharaja. Oh what a deft swimmer this cat can be! The sambhar fled and hid under cover of foliage. The langurs chattered themselves hoarse. We sat rooted in the SUV following every step of the tiger. Out of water, a big shrug and the tiger was just below us almost in eye to eye contact. Suddenly we found ourselves in the path of the big cat. Without firing the engine we rolled back about 20 meters to maintain safe distance respecting the right of way of the king of Corbett. The seasoned campaigner sensed some extraneous presence, delayed his appearance on the road. Once sure of his safety, the tiger finally appeared on the road quite relaxed but alert. He looked towards us, as if on purpose, eye to eye once 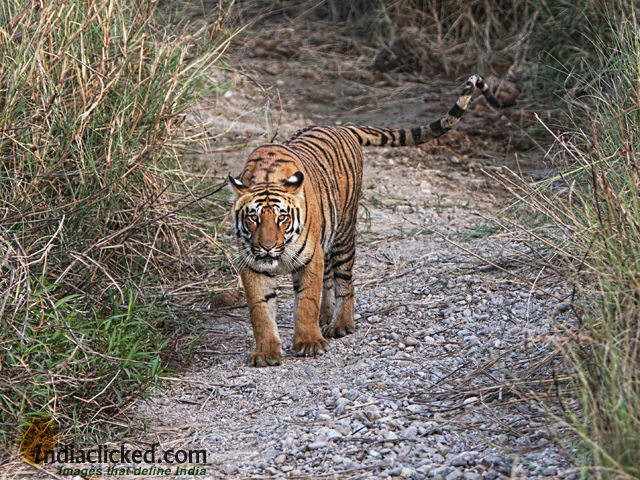