Hidden Gems In The Hills- Tribes From The Mountains

Spring is one of the best times to explore the culture and landscape of charming Himalayan tribes of Uttarakhand. Here are the five key cultures we recently discovered. A chance flip through an old coffee table book we came across recently at a bed and breakfast introduced us to some of the incredible tribes in Uttarakhand. Pictures of Bhotias, Jadhs, Tharus, Buxas, and Jaunsaris, among others, described not only the heritage and craft hidden among the hills but also the sweet customs and culture in this region.

Semi-nomadic and pastoral, the Bhotias are known to be excellent mountaineers. They come from Kumaon and Garhwal’s higher valleys, and also along the Tibetan and Nepal border. They worship Nanda Devi, and other deities who are known to protect livestock, control weather and even help find lost animals.

Like Tharus, Buxas are also said to be decendents of Mongols and Rajputs. They are followers of Ram and Krishna, and they call the Terai and Pauri Garhwal region their home. 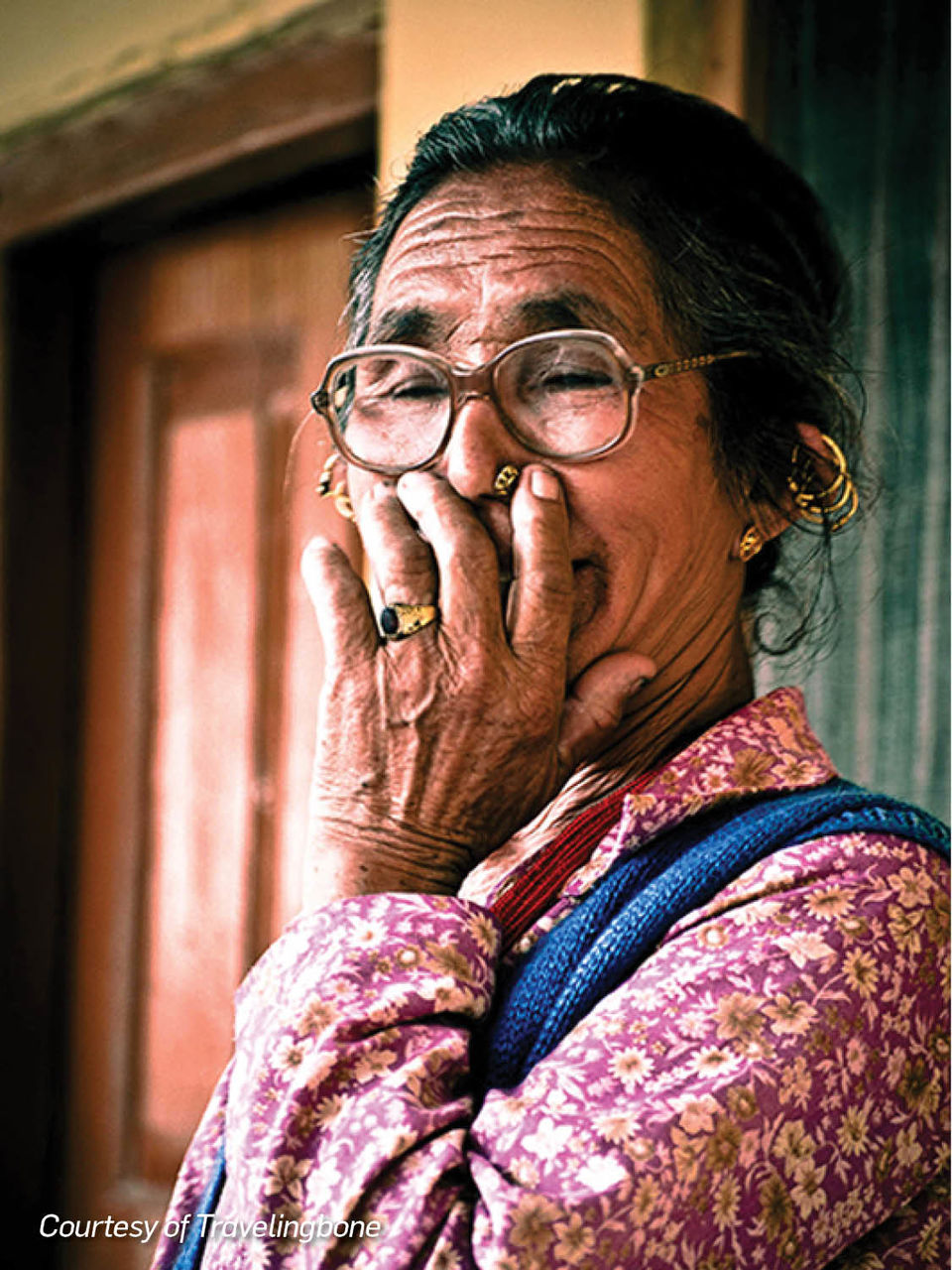 Once the largest scheduled tribe in the former undivided state of UP, is now mostly a resident of Khatima and Sitarganj areas. Some researchers trace them back to Rajput communities, while others believe that they are decendents of Mongols from Central Asia. The Tharus believe in 36 gods, witchcraft, sorcery and sacrifice. And while they are primarily an agricultural community, they are also excellent in fi shing. One of the local traditions however forbids women from eating fish that has been touched by men, hence women fish separately. 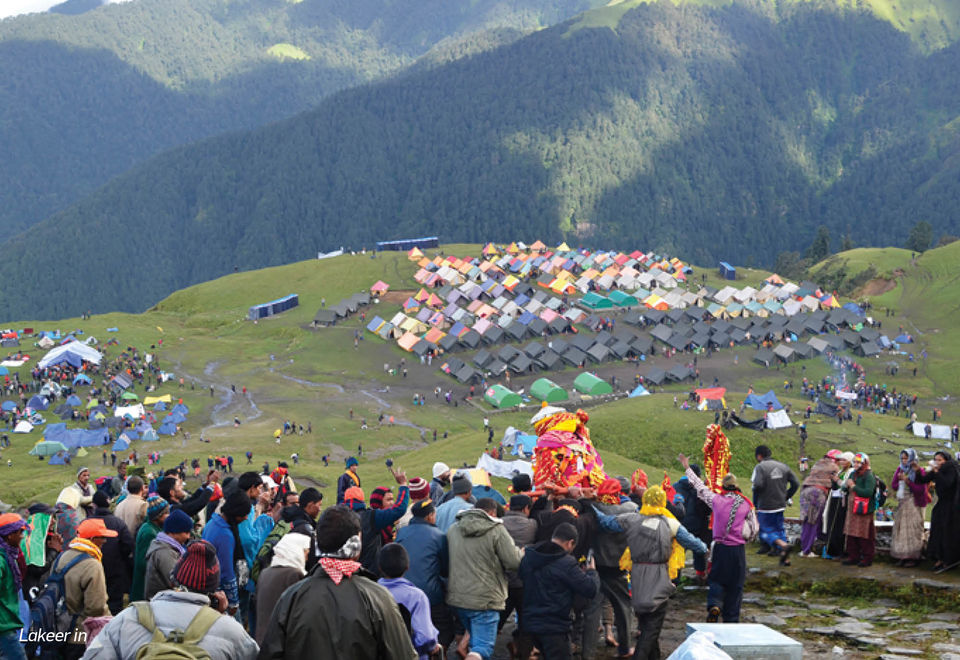 The Jadhs are a really interesting community. They live in the high, cold and dry areas of Uttarkashi—particularly in the villages of Nelang and Jadhang. Every winter, the entire tribe migrates from these high altitude villages, and moves to forests around Rishikesh. They speak a Tibetan dialect, Garhwali and Pahari, and have Mongoloid features.

The term ‘Jaunsar’ represents a number of tribal groups namely the Khasas, artisan classes Koltas and baigis who inhabit the Jaunsar area of the Dehradun district. This region has links with ancient cultural influneces during Vedic, Mahayan, Kushan and Gupta periods of Indian history. The people follow many old customs distinct from the other tribes from Garhwal, Kumaon and Himachal areas. Even the art and architecture has unique features, the most recognisable being the heavy use of woodwork. The Jaunsaris’ celebration of Magh Mela is something culture and photography enthusiasts would enjoy immensely. They have another custom that is intriguing and is said to be inspired by Mhabharat: they follow polyandry, and so often, if a man gets married, his bride ecomes the wife of his brothers, too.

Folk dances from the different tribes capture the fl avours of the terrain, as well as the cheerful nature of the Himalayan people. 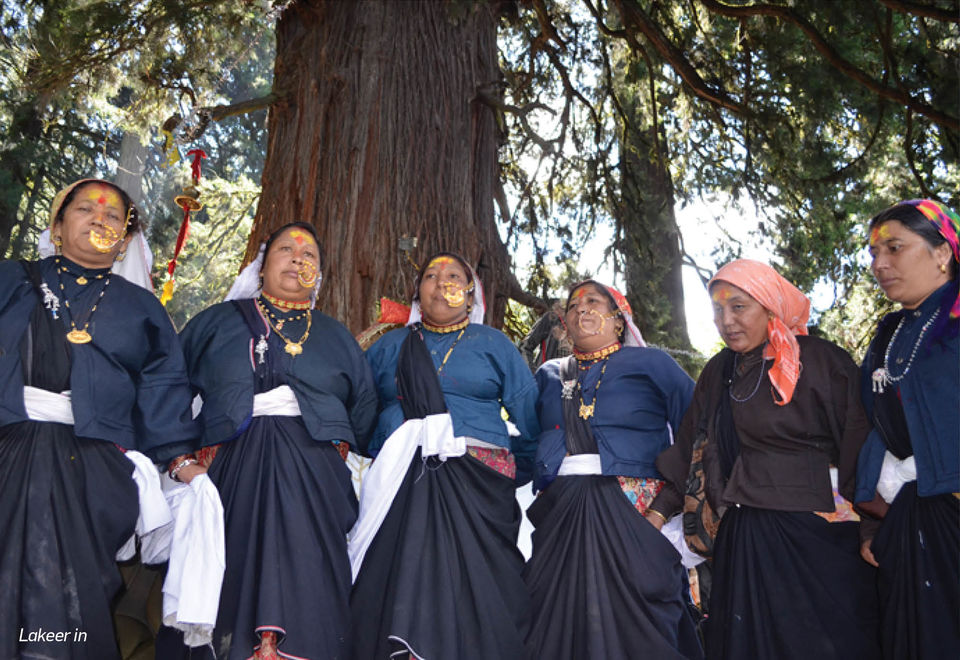 It’s a war dance that researchers say can be traced back 2000 years. It started with the victor marrying the daughter of the loser. Dueling for the girl has lost its importance over the years, thankfully and now is just an art form. Interestingly no woman participates in this dance form. It begins with the blowing of the Turturi, a trumpet like instrument’ signifying the start of a war.

A group dance where hundreds of men and women participate especially during the grand Nanda Devi Fair. They dance to the beat of the local drum called ‘Hurka’.

A playful competition amongst men and women, it has been derived from the Jhora. Love forms the main theme and is quite popular both in Kumaon and Garhwal.

A free movement dance form quite predominant in Garhwal. Performed in an open courtyard. Both men and women participate in this ritual. The movements seem similar to the Assamese Bihu and Kashmiri Rauf.

A rather sensuous dance form, it is believed that the goddess Parvati performed this dance in order to woo Lord Shiva. The steps, expressions, and the hand movements have a hypnotic quality.

The dance is meant to show a beautiful and playful courtship between a woman and man, but is actually entirely performed by men.

It’s a ceremonial performance meant to invoke the village deity, where the deity is said to enter the body of a designated medium and answers questions to the ones suffering. The person who invokes the deity plays a drum and is accompanied by the people playing the hurka or using a brass plate.