Witnessing Kerala’s Celestial Theyyam Festival – A How To Guide 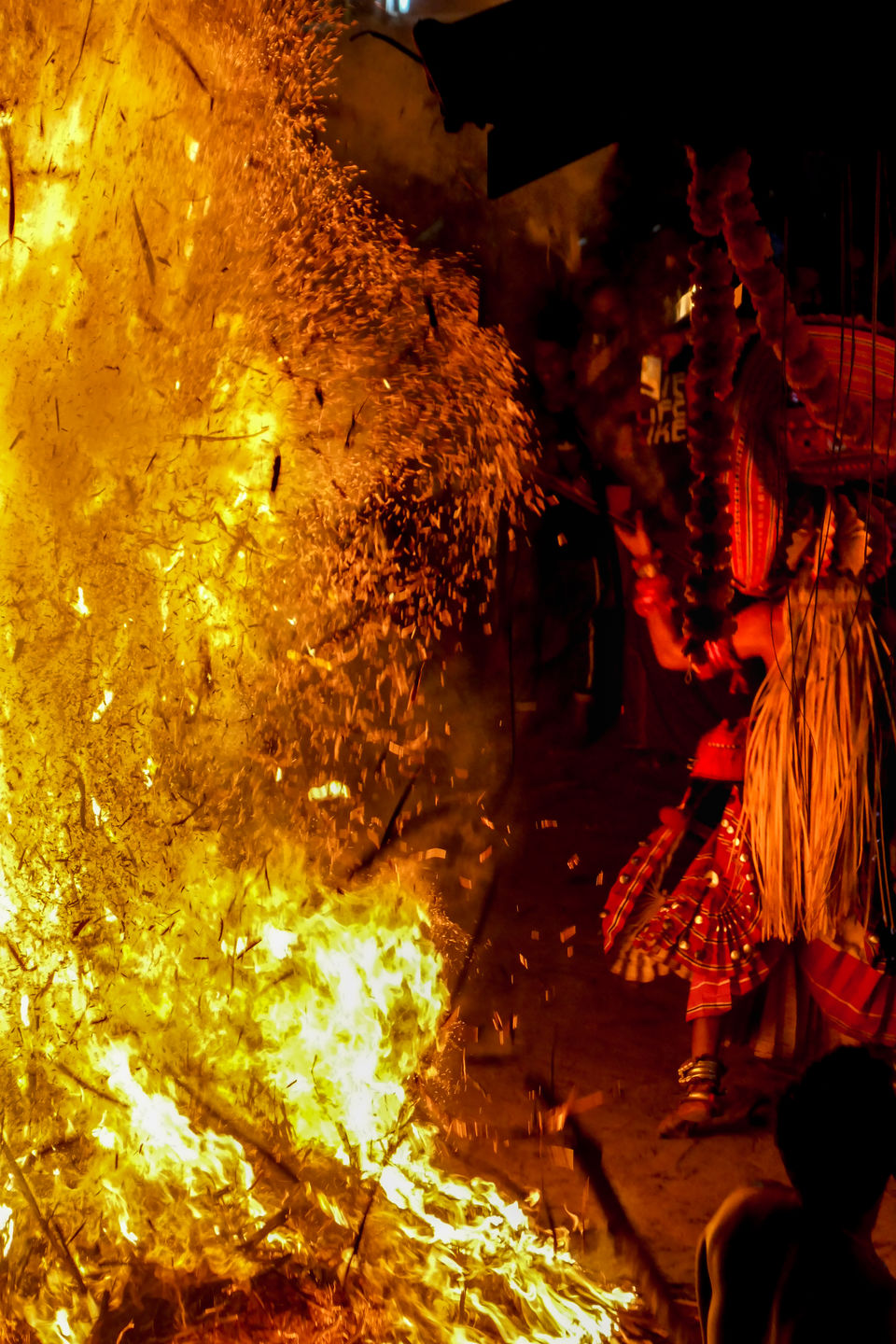 From lush, verdant hills to serene backwaters and graceful lagoons, rich heritage and immersive culture, Kerala truly is “God’s Own Country”. It is said that the great stories are often retold using art forms. Theyyam is one such ceremonious art form that captures the real essence of Kerala. It is here that the legends truly come to life. Theyyam is a famous ritual performance that originated in North Kerala. It exalts the beliefs of the ancient tribals who gave a lot of importance to the worship of heroes and the spirits of their ancestors.

Theyyam is a sacred dance performance that dates thousands of years back and is usually performed in front of the village shrine, groves, and in some joint-family houses as ancestor-worship with elaborate rites and rituals. The word Theyyam literally means ‘God‘, hence the Theyyam dance is known as the ‘Dance of Gods‘. This unique dance form is a synthesis of ritual, dance, vocal and instrumental music, painting, sculpture and also literature. It is performed to worship Hindu Goddess Kali for which it is also known as ‘Kaliyattam‘. 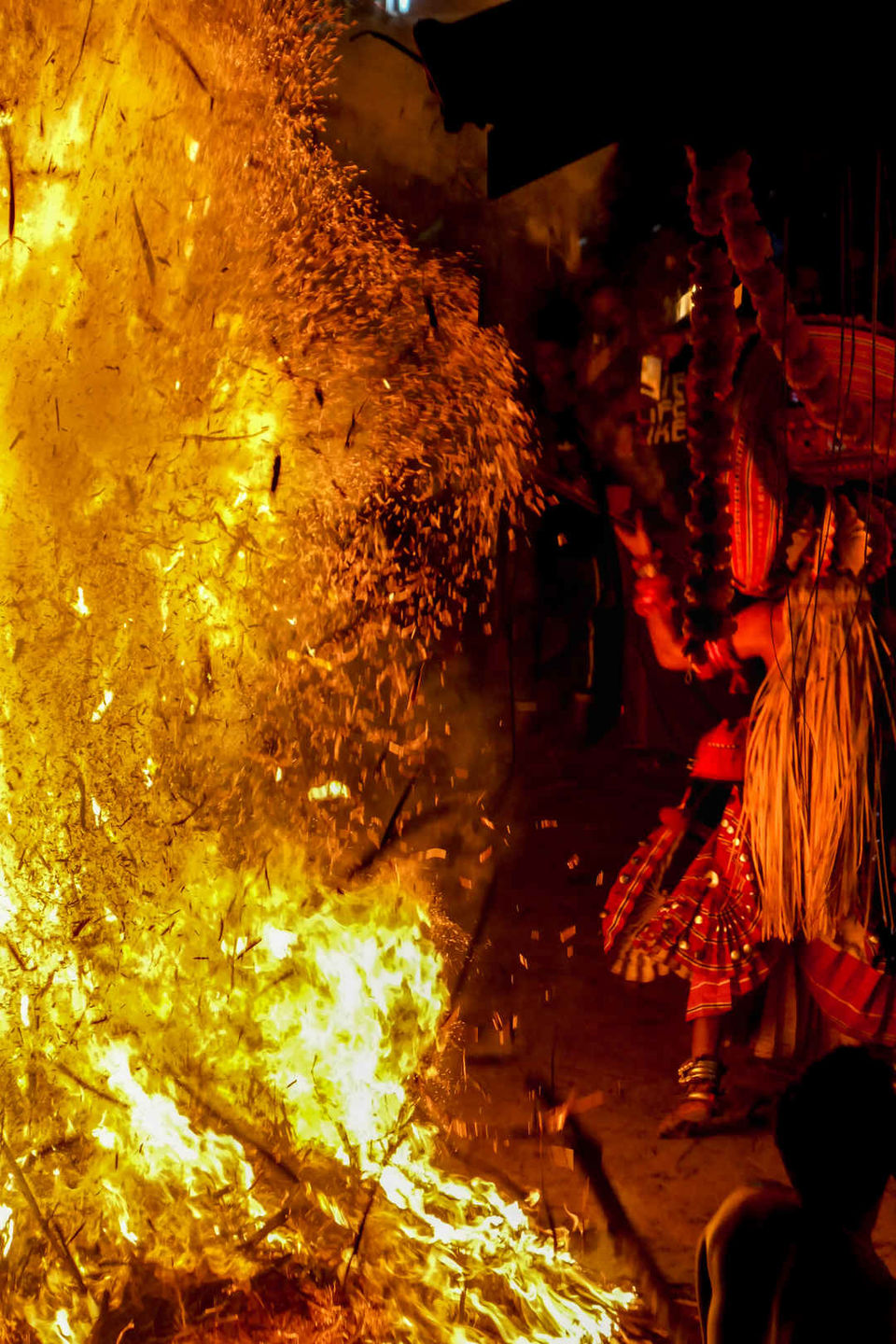 The Theyyam dance is often performed by men, mostly from the scheduled castes and tribes who have inherited the right to perform Theyyam. The Theyyam performer is called ‘Kolam’ who represents a divine, mythological, or heroic character.

There are over 400 separate Theyyams, each with their own music, style and choreography. The most prominent among these are Raktha Chamundi, Kari Chamundi, Muchilottu Bhagavathi, Wayanadu Kulaven, Gulikan and Pottan.

What do you experience?

Theyyam is a powerful, unique and divine splendour to watch. Theyyam is a 3-day affair in most cases. It is generally performed in Kaavus. There are performances in temples as well but Kaavus is where it majorly happens. The performance kicks start in the night of the first day with drum-beats, presumably an announcement of the event taking place. Theyyam performance begins with Vellattam or Thottam. It is performed with only a small red headdress and a simple make-up without any heavy costume. Then the dancers are accompanied by drummers and they recite a particular ritual song, which describes the myths and legends of how the deity of the shrine came to be honoured. 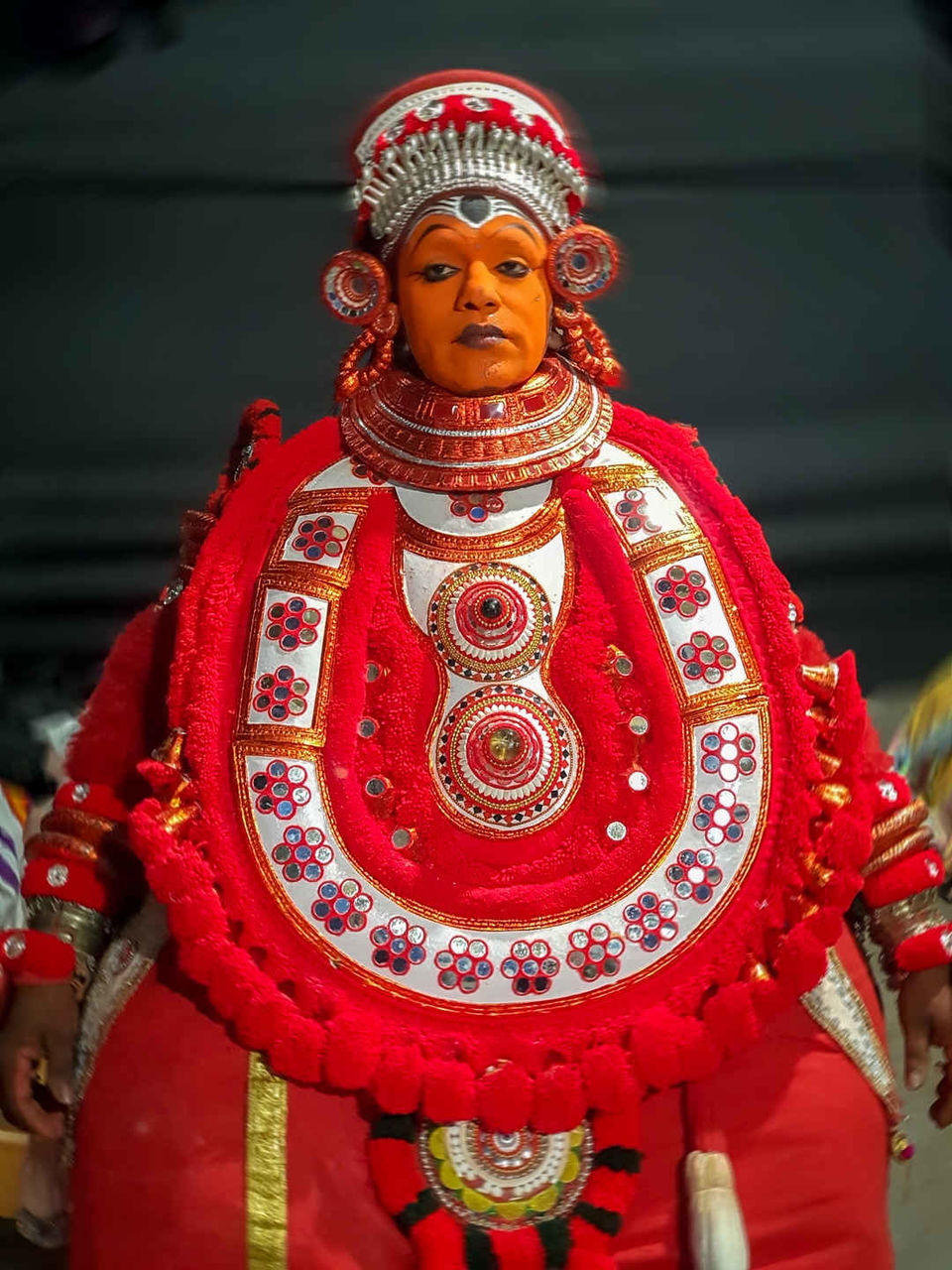 After a short interval, the dancer makes a ritual entrance into the shrine with elaborate costumes and makeup. The performer prays in murmur for gaining prophecy or say to manifest the power of deity in him. This act is called as Varavili. Varavili is deity specific. With the Varavili, it is presumed, the performer has attained prophecy on behalf of the deity. Then he is seated before the shrine and the headdress, which is the most sacred part of the costume is put on and he gradually transforms into the particular deity of the shrine. Until the headdress is removed, he is considered as divine. The Theyyam dances all around the shrine and its courtyard, performing rituals and blessing the devotees.

Read an exclusive story on how I experienced Kandanaar Kelan and Guligan performance in the middle of the forest during the wee hours of the night.

When and Where does this festival happen?

Theyyam originated from the Kannur, Malabar regions of Kerala and this annual festival happens in the northern belt of Kerala in various temples. The towns of Kannur and Bekal are good hubs to see Theyyam. Both these towns are on the coastal side of Kerala, so you can combine a bit of beach life with culture. 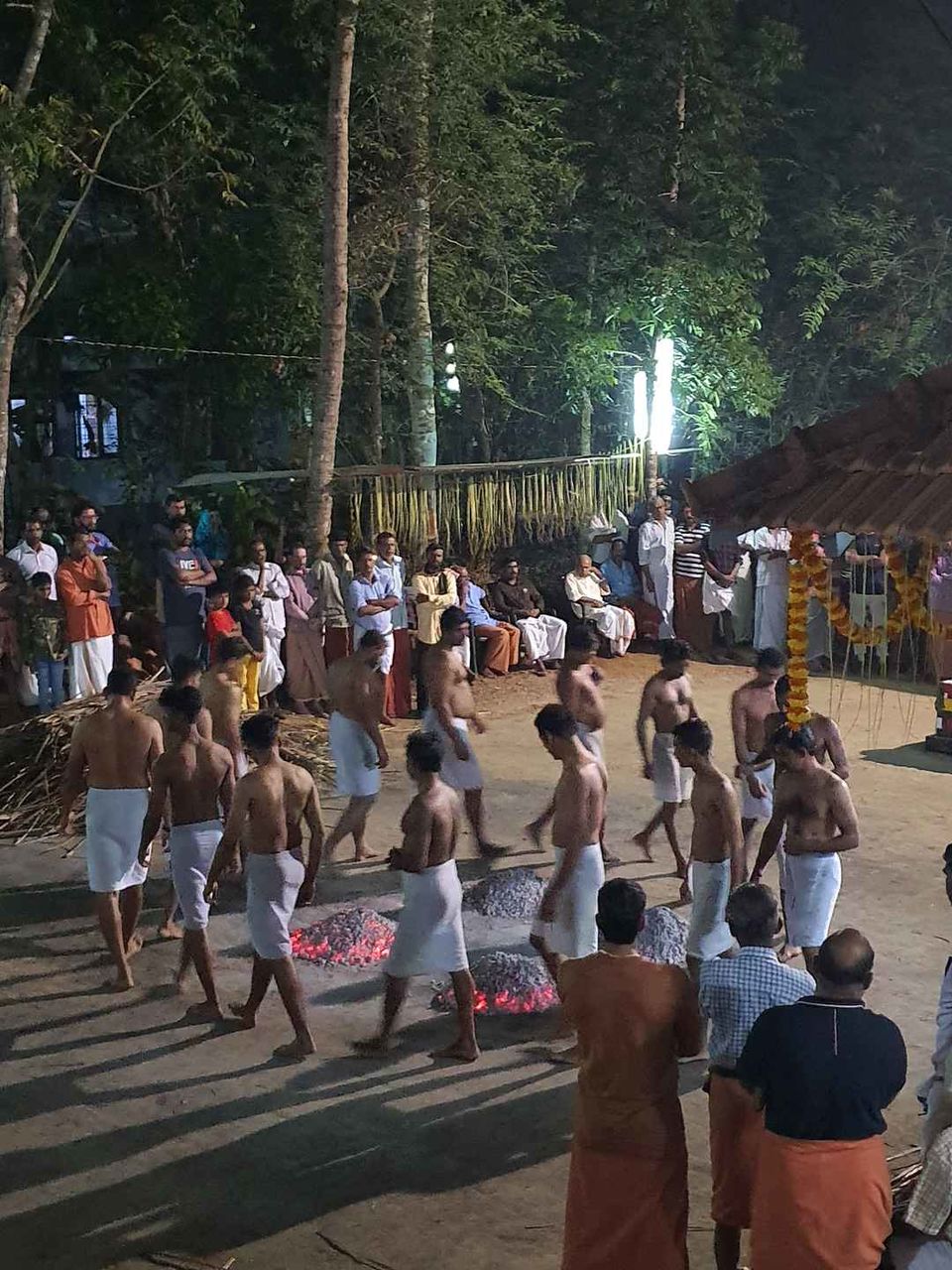 The festival takes place from October to May with November and December being the peak season. Multiple performances are organized in a day in this region during the peak months. The Kerala Tourism website has a Theyyam calendar, as does the Theyyam Calendar site. Note that dates and times often change, so it’s best to check with locals beforehand to make sure Theyyam is happening in the aforementioned temples!

How much does it cost to see Theyyam in Kerala?

Seeing Theyyam in Kerala is not an expensive affair. All you need to pay is transportation to and from the event. The challenge is to find the right time, temple, and transportation to 4 AM performances. The best way to look for this is to talk to your host in the accommodation booked. Most hotels and resorts will have information regarding the festival and can arrange transportation. 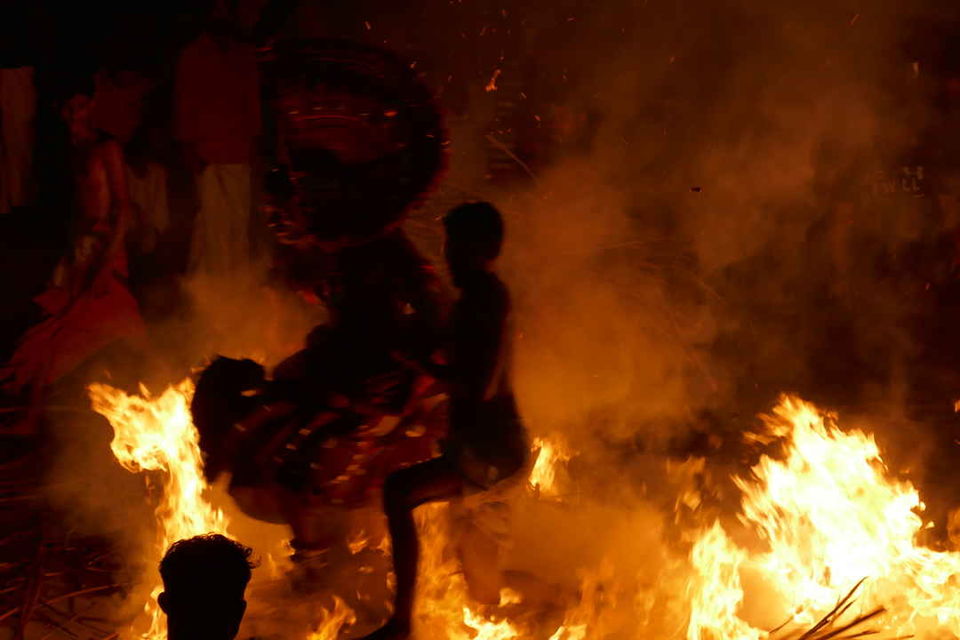 There are also travel agencies who organize these tours for you, one being Travel Kannur. The prices were expensive, and package offered were not justifiable. Though I enquired for the costs, I ended up doing the tour myself with help of the guesthouse folks I stayed in.

I took the trip with a friend and we shelled out 3700 collectively for watching two different Theyyam performances in two different remote locations in all the odd timings possible, one being at 3AM in the morning. It’s a steal deal alright ????

Kannur is packed with hotels, resorts and homestays, you can pick the property depending on your budget. I stayed at Manshore Bay Guesthouse in Kannur and would highly recommend staying there if you’re planning a trip to Kannur. 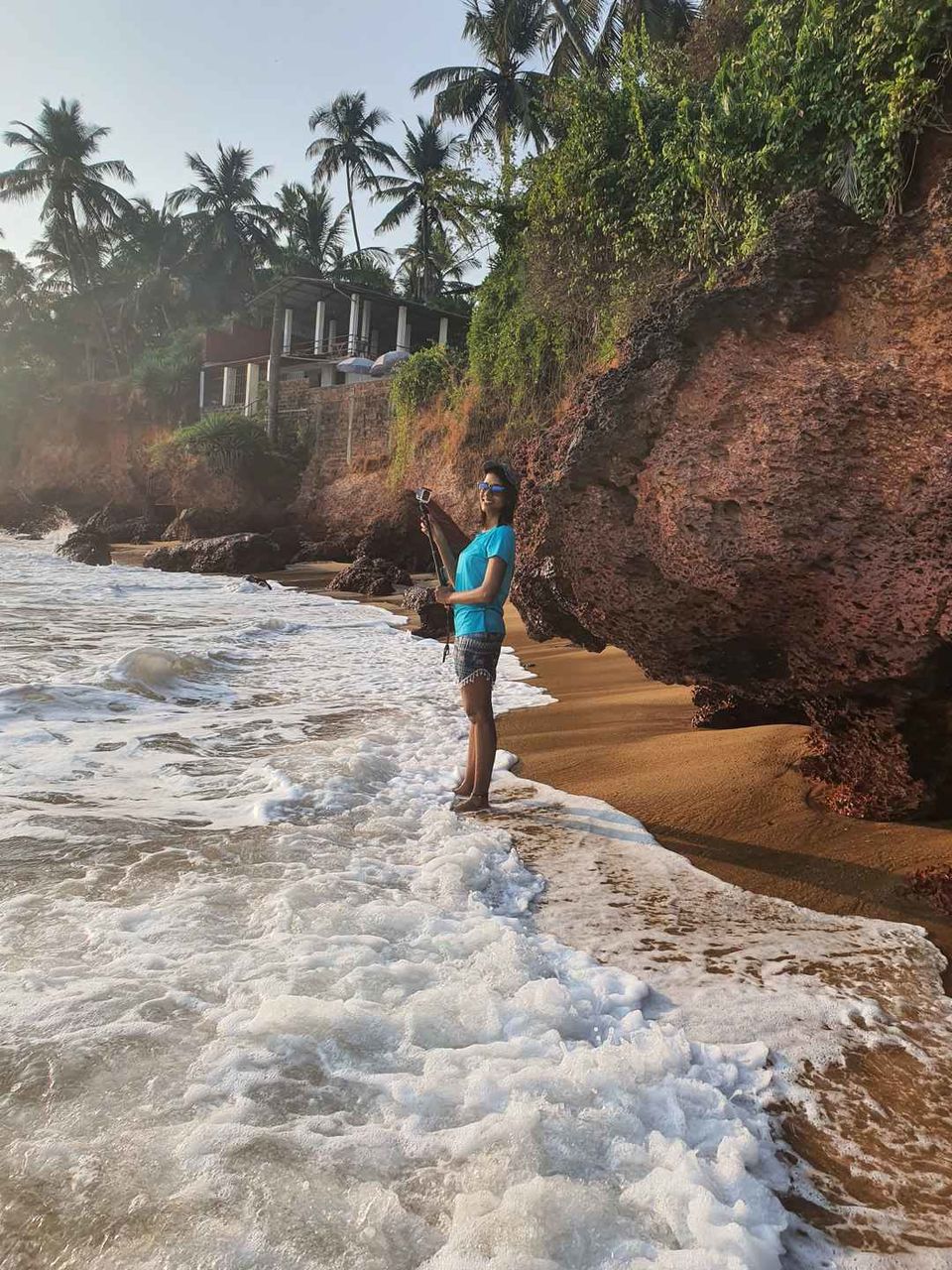 The property comes with its own private beach and most of the rooms are sea-facing. The team is efficient, and they do their level best to make sure your stay is comfortable and safe. I had planned to watch the famous Kandanaar Kelan performance and the temple was 24kms from Kannur. The guys at Manshore helped in arranging the transport and made sure we witnessed the performance at 3AM.

You can look at the reviews and book the property here

1. Be respectful of the culture. Take photos but don’t run around and disturb the people performing.

2. Avoid shorts and too much skin show. Most of the performance happens in temples and Kaavus. Though it’s not a strict rule, it’s better to wear clothes that cover your knees and your shoulders.

3. Though performances happen round the clock, be sure to catch one or two in the late night or early morning. That’s when the fire comes out!

4. You are allowed to get a blessing from the Kolam who performed the Theyyam

Hope this read gave you an idea of how stunning Theyyam is! Make sure to add it to your India bucklist this year!