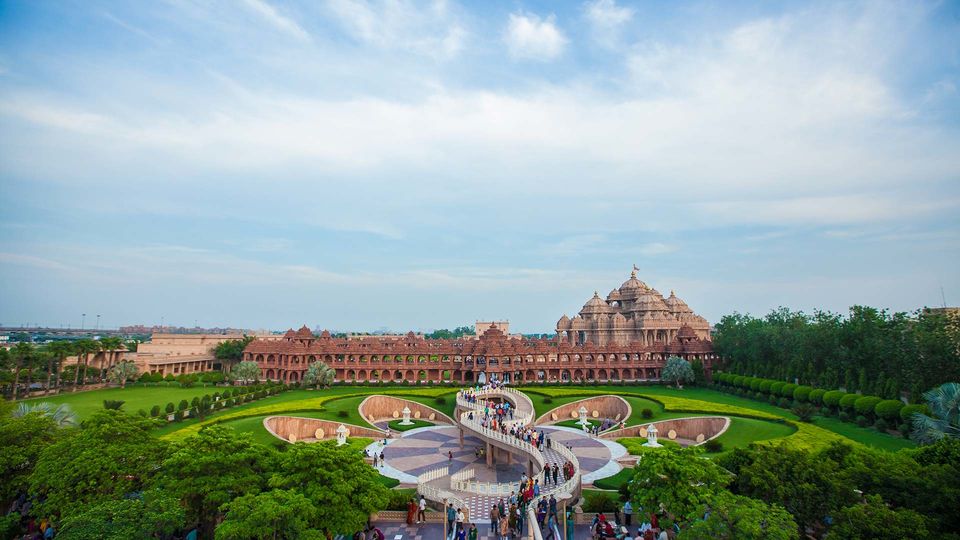 Akshardham or the abode of almighty Lord Swaminarayan, is one of the world's largest comprehensive Hindu temple.

Standing near the Yamuna bank just adjacent to the commonwealth games village, this temple attracts approximately 70 percent of all tourists who visit Delhi.

The building had been planned since 1968 as a vision of Yogiji Maharaj,the spiritual head of the BAPS Swaminarayan Sanstha at the time who expressed his desire of building a grand temple built on the banks of the Yamuna river to two or three devotee families of Swaminarayan that resided in New Delhi at the time.Attempts were made to start the project, however little progress was made.

In 1982, when Yogiji Maharaj had already left for heavenly abode, his successor(Pramukh Swami Maharaj) started to continue fulfilling the dream of his guru.A request for the plan was put forward to the Delhi Development Authority (DDA), and several different places were suggested, including Ghaziabad, Gurgaon, and Faridabad.

In April 2000, after 18 years, the Delhi Development Authority offered 60 acres of land, and the Uttar Pradesh Government offered 30 acres for the project.Upon receiving the land, Pramukh Swami Maharaj performed puja on the site for success in the project. Construction on the temple began on 8 November 2000 and Akshardham was officially opened on 6 November 2005, with the building being completed in two days short of five years.

Since then, the magnificent temple with an awestruck architecture is standing tall near the border of Delhi and Uttar Pradesh.

The temple opens for visitors at 9.30 AM and last entry is at 6.30PM . The temple remains closed on Mondays.

Nearest Metro Station is Akshardham Metro Station. Take Blue line towards Noida City Center from Rajiv Chowk Metro station. The temple is less than 500metres away from the station.

What All to See

Welcome Gates: A pilgrimage at Akshardham begins at the Ten Gates – signifying ten directions – and continues as visitors pass through the Gate of Devotion, the Visitor Center and the Peacock Gate to arrive at the Charnarvind. Enjoy intricate carvings of Mayur Dwar and make a wish at Charanarvind - Holy Footprints.

The Main Mandir: The Heart of the Swaminarayan Akshardham complex is the Main Mandir surrounded by Narayan Sarovar.(An artificial waterbody that contains the holy waters of 151 rivers and lakes sanctified by Bhagwan Swaminarayan)

On the outer wall of the mandir are 108 bronze gaumukhs, symbolizing 108 names of God, from which holy water spouts forth.

Architecturally, the mandir is an homage to traditional Indian Hindu architecture. It is designed with an eye to the ancient and medieval Indian treatises on architectural science - the Shilpa Shastras.

Accordingly, the mandir is made without the use of ferrous metal in construction.

The Akshardham mandir consists of 234 intricately carved pillars, 9 ornate domes, 20 quadrangled spires and 20,000 statues of India’s Hinduism’s spiritual personalities. Inside the mandir, each worshipfully carved pillar, ceiling and dome shares a story of devotion, offers darshan of a deity, or captures an incident from the life of Bhagwan Swaminarayan.

Abhishek Mandir: Visitors can perform abhishek of the murti of Neelkanth Varni - the youthful, yogic form of Bhagwan Swaminarayan. This ritual bathing of the murti is a uniquely participatory ritual, open to all visitors.

It comprised of three parts:

Neelkanth Darshan – A giant screen(85 feet wide and 65 feet tall) showing Neelkanth Yatra(First Large Format Film on India).Shot at 108 different locations with a cast of more than 45,000, the film potrays a young Neelkanth Varni on an epic trek across the Indian subcontinent reminding you of the value of sacrifice and service, the wisdom of the eternal soul, and the power of faith.

Sanskruti Darshan – This is a 12 minute boat ride presenting some of India’s important contributions to the world.

Thematic Gardens: The two beautiful gardens further the sentiments expressed by the Ten Gates at the start one’s visit.Both the gardens help visitors relax while exploring national history and international learnings. With statues of great people and quotes from across the world, these gardens foster wisdom in their shade.

The Watershow: A 24-minute presentation which unites a variety of intriguing media to bring to life a story from the Kena Upanishad. Multi-color lasers, video projections, underwater flames, water jets and surround sound in symphony with lights and live actors(some cute children) produce a captivating and inspiring presentation.

1. Visit the place on a weekday to avoid the crowd.

2. There is no ticket for visiting the temple but you need to buy tickets for the watershow. You can get it from the counter near the Mayur gate on the way to the Main Temple.

3. Watershow timings are dependent on seasons. During summer, it generally starts at 8PM after the sunset. Ticket is 80/- per head and try to get it as soon as you enter the complex. During weekends it can be really hard to get tickets. To handle the weekend rush, they conduct the show twice sometimes(one at 8PM and another at 8.45PM).

4. The canteen inside the complex is quite big and offers delicious foods of different varieties starting from full course meals to snacks in the evening.

5. Security is very high here. You will not be allowed to carry your mobile phones or any electronic devices. Just carry your purse and water bottle.However, one photography spot is there inside the temple where you can get your family photo clicked with the temple in the background. It will cost you 200/- for each photo.

6. Ample space for car parking is available at 30/-