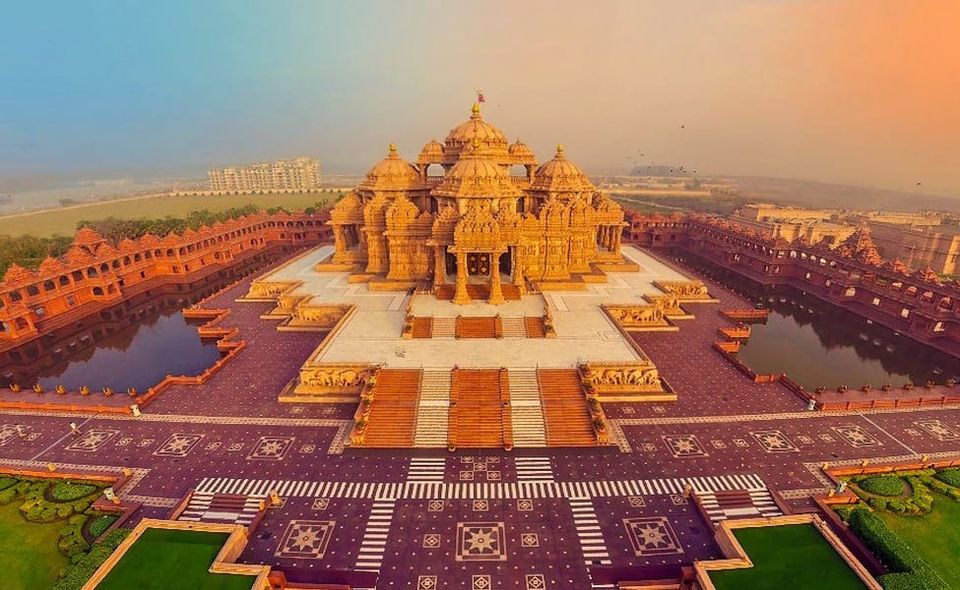 (Blog 6 in my series of blogs - Delhi Delight)

We were attending a conference on Advances in Robotics, and both of us were least interested. Hence, we decided to tick off another item on our to visit list. One of the most popular tourist destinations in Delhi and an epitome of ancient culture and traditions, Akshardham Temple situated on the banks of River Yamuna is a sacred site for the Hindus. Both of us had heard of the grandeur of the temple, but had seen it only from a distance, never visited inside.

Just like most of the places we visited, we arrived there just a few minutes before the ticket window for various shows within the temple closed. There was huge queue, as expected. We had to submit our phones and various other items at the entrance. Photography was not possible as phones were not allowed inside the temple premises. We decided that I would stand in the queue to submit our mobile phones, while she would go join the queue to buy us tickets. Since mobile phones would not be with us, it would not possible for us to contact each other once separated. Hence we decided on a meeting point. Even though both of us were sceptical of going different directions in a totally new place, it was the only way we could collect the tickets on time. Without watching the shows, the visit would have been incomplete.

After about half an hour of waiting in the queue, and security checks, when I entered I found her easily. She was still standing at the ticket counter. On collecting the tickets, we proceeded to watch the shows. There were 4 shows in total. The first named, Sahajanand Darshan (Hall of Values) displayed incidents from Swaminarayan's life by the use of robots and other visual aids. It stressed on the importance of harmony and non violence which Swaminarayan, the main deity of Akshardham stood for. The second show was Nilkanth Darshan. It was a cinematic show, which showed us other various phases of Swaminarayan's life. The third was Sanskruti Vihar. It was a boat ride in an artificial canal through Indian history. It depicted life in ancient India. From the traditions to occupations, education to religion everything was covered. The contributions of many great men of the past was emphasised. All the three shows took about 2 hours to complete. The final show was the most awaited. We had heard a lot about it.

The Musical Fountain. It as raining when we reached the large step well where the show happens. Since we had no phones, there was nothing to worry about. We watched the amazing Water Show completely drenched in rain. It went on for about half an hour. It was a completely different Musical Fountain SHow than any other I had seen. It was shown in the form of a story using characters of India's past and mythology. Combined with the light and sound effects, it was an enthralling experience. We didn't mind the rain much. Finally we went to the main temple where the deity of Swaminarayan was seated.

It was well almost 10, and we were worried we wouldn't find a Metro. So we hurried, ran on the streets until we reached the Metro Station. Panting, as we reached the station, we were relieved to see that the Metro was still functional. We were under the wrong impression that Metro in Delhi is functional only until a little later than 10. We were wrong.

Soaking wet, as we entered the Metro, we were glad to see it wasn't crowded. Found a seat easily. We hadn't had our dinner. But we were glad to have caught the train. It would have become very difficult if we were late.