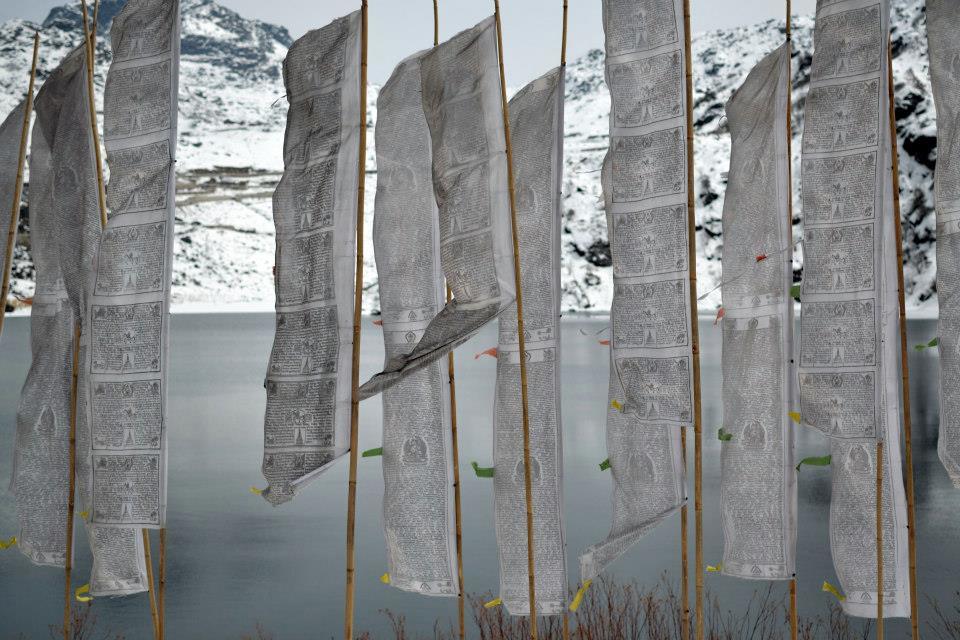 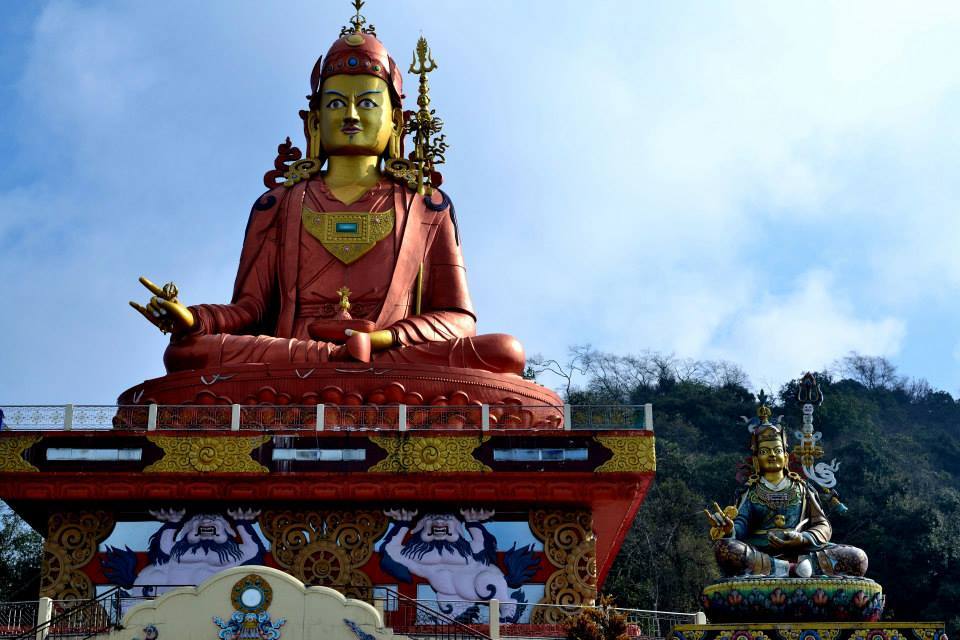 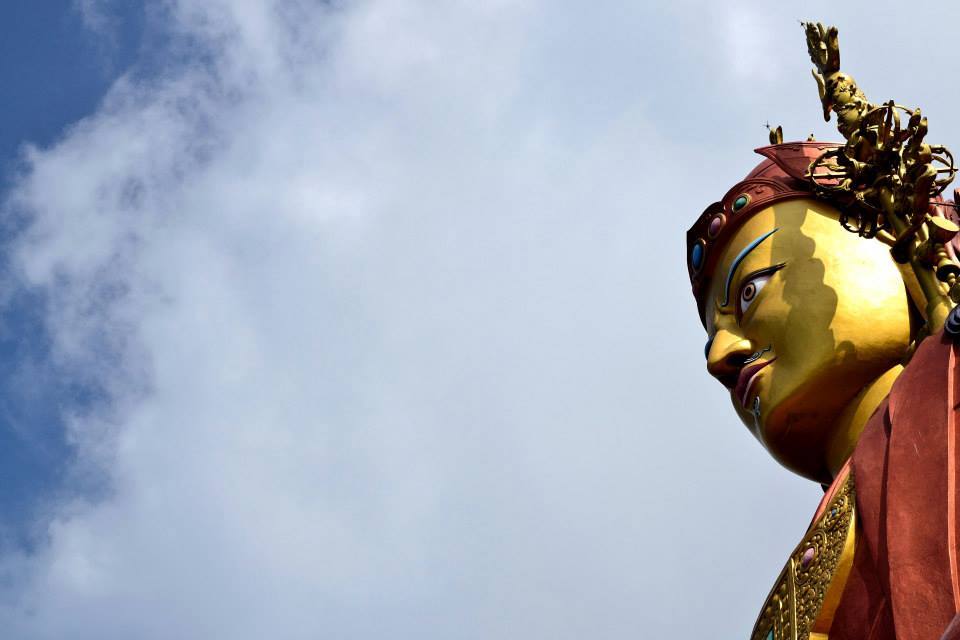 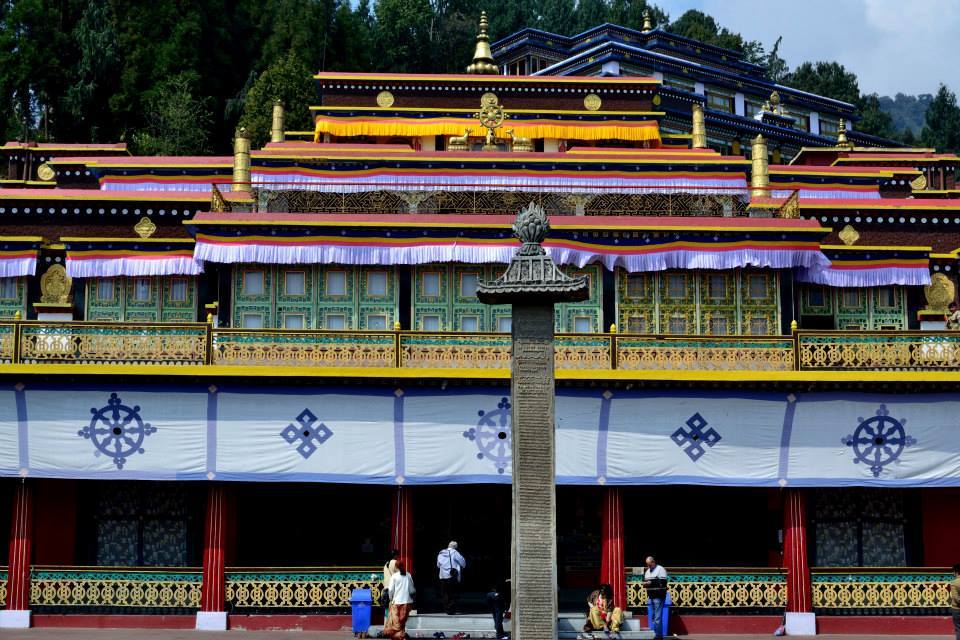 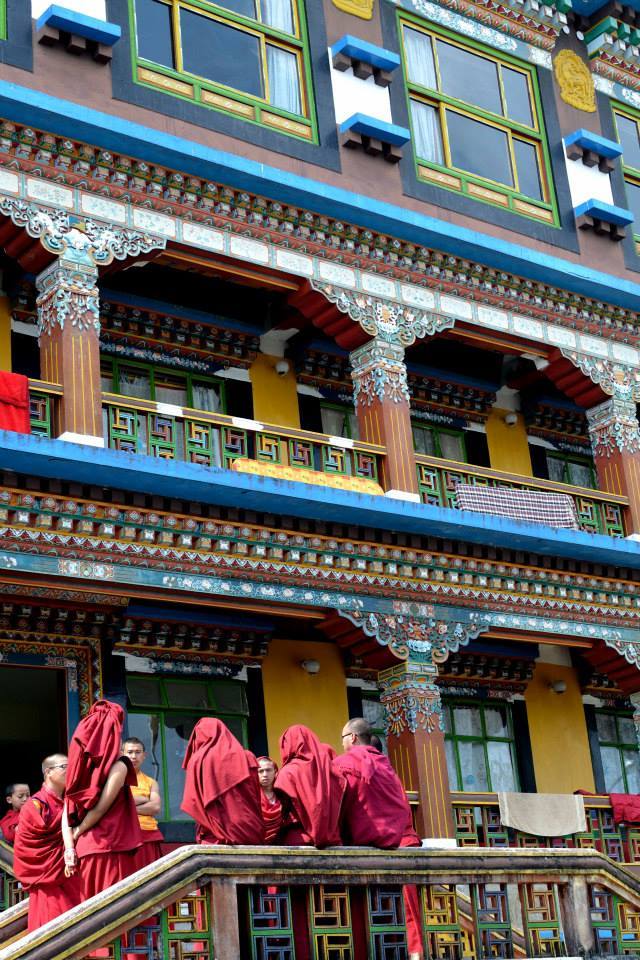 Having some fun with the snow 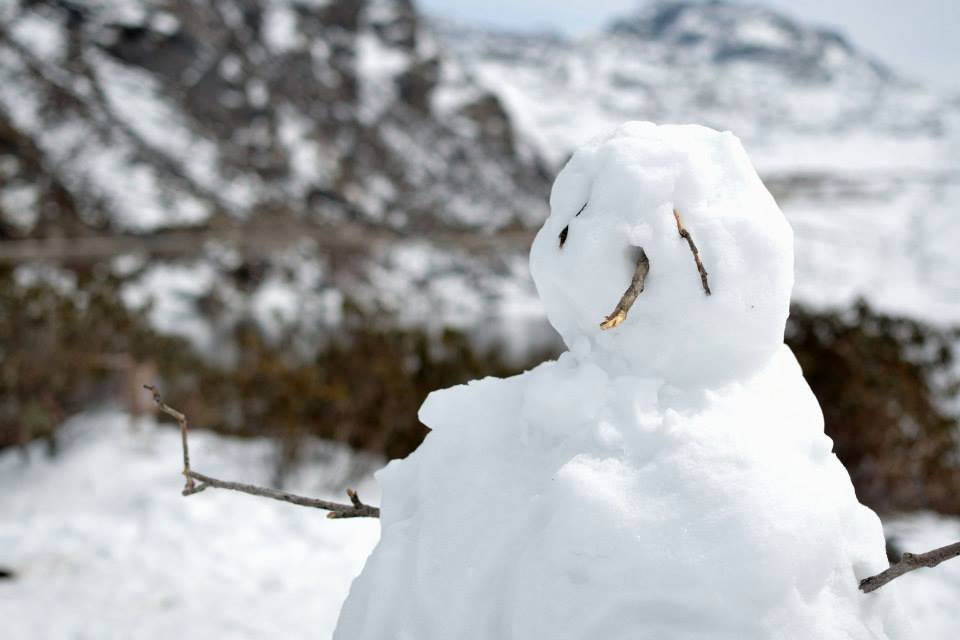 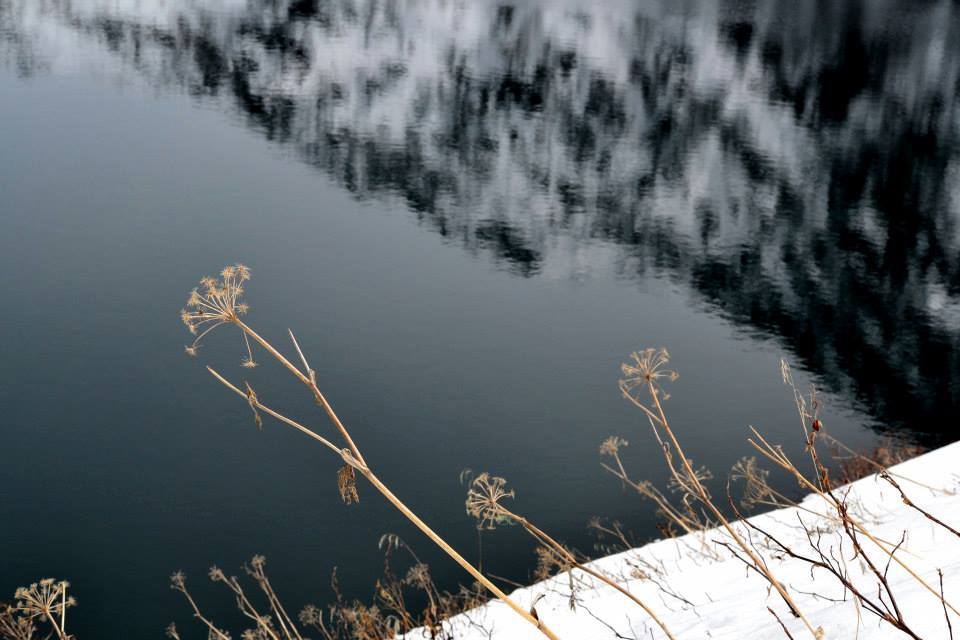 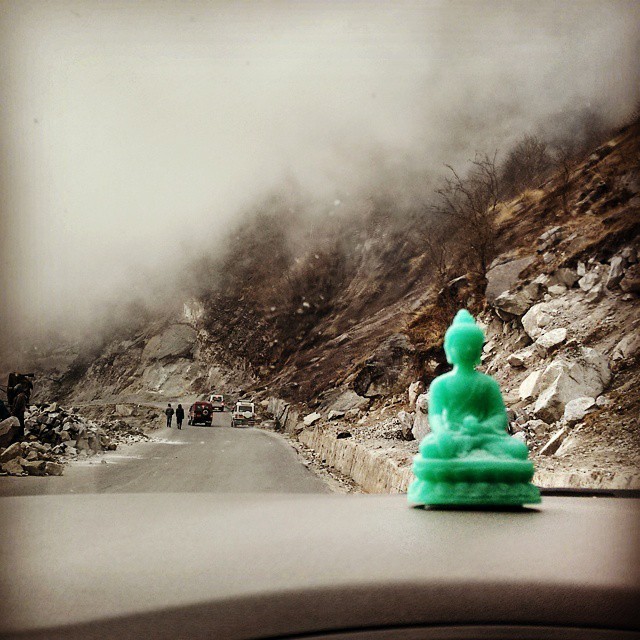 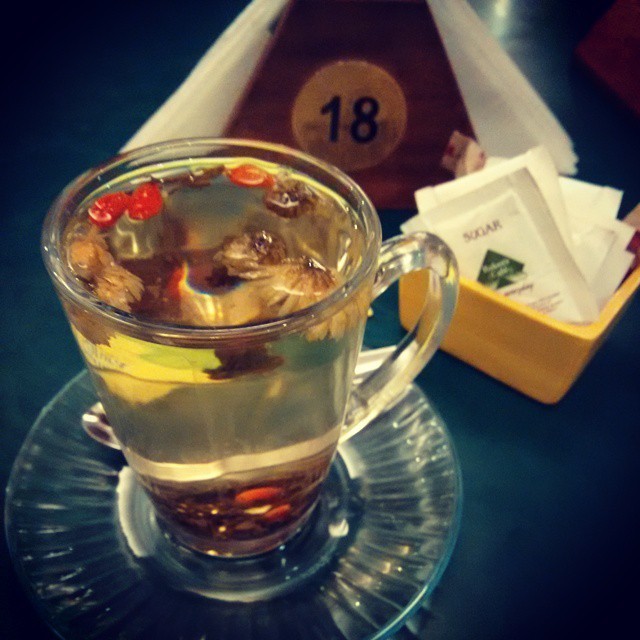 Fresh tea from the Garden 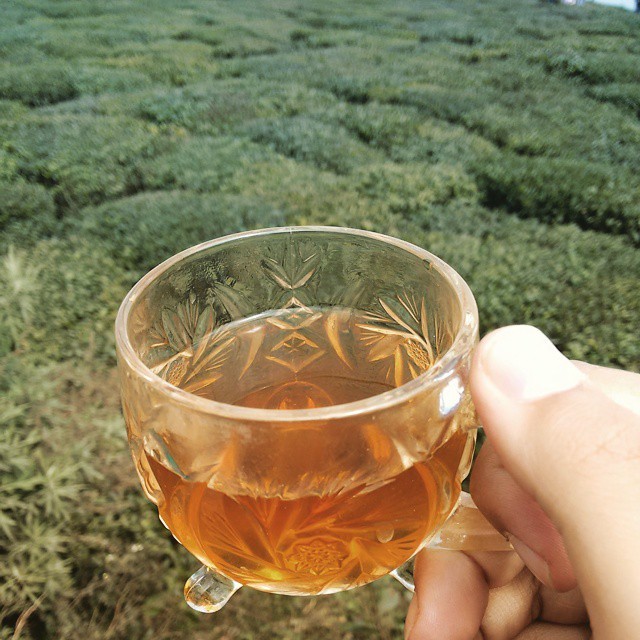 A NIGHT IN Namchi

Much of 3rd grade geography was spent trying to learn the names of the states and their capitals. Sikkim and Tripura were my personal demons. I was always mixing the two up- their locations on the map as well as their capitals. They were just so remote, and so unimportant to a 9 year old living in Delhi. Even in the 15 years that followed, hardly any thought was given to these small eastern states. Till the time Air India announced all domestic flights at Rs. 1500. Almost on a whim, bookings were made for Bagdogra with the intent of traveling ahead to Sikkim.

We spent a day in Namchi, South Sikkim. At first sight, Namchi is unimpressive. A disappointment even, considering that the Chief Minister of the state for the last 25 years belongs to this constituency. The major 'attraction' is the Char Dham Temple Complex, which in my opinion, is essentially a Mini Siam of temples. There were smaller 'replicas' of the four main dhams and a gigantic Shiva statue to overlook the whole complex. The place is pretty enough- manicured and well maintained. The main prayer hall is adorned with murals depicting scenes from Shiva's life, which, being quite fond of mythology, I found interesting. However, I felt that the place lacked a certain character. It felt too artificial, too new and too 'perfect'. The sense of awe and wonder that you experience on beholding the massive, yet intricate temples of Kanchipuram, or the sense of peace and serenity that washes over you at the Bahai Temple, Delhi was missing in this place. It just felt too plastic. (Incidently, this is also how I feel about the Akshardham in Delhi.)

In the evening, we walked to Namchi Bazar. All the shops were closed on account of holi. Well, almost all. The liquor shops were very much in business. So was a tiny little shop called 'Rekha's Fast Food'. People were lining up outside this shop for a hot cup of tea and samosas. After warming ourselves up with the Rs. 5 chai, we wandered along the Central Park. This is a misnomer since it's not technically a park, but a pedestrian-only area with a fountain and an aquarium surrounded by (shuttered) shops. The

walkway was covered in pink gulaal after the day's festivities. We sat on one of the many benches and people watched. The longer I sat, the more I started warming up to the place. This was the heart of the city. Even though the heart was on holiday, there were still locals walking around, catching up, laughing... I imagine that the atmosphere would only be livelier on a regular day.

We made an early start for Gangtok the following morning, stopping to visit a couple of places in between. Our first stop was at Samudruptse, where there is a massive statue of Guru Padmasambhav- the patron saint of Sikkim (according of one of the plaques). The path leading up to the statue was  lined with Buddhist flags waving in the wind, the air was fresh with the smell of the mountain forest and the sound of chirping birds flitted through the atmosphere. Peace! I made friends with a kitty who I found meditating (soaking up the sun) on one of the benches. It mewed and purred loudly in response to my petting but refused to pose for photos.

We made another pitstop at a Temi Tea estate where we basked in the sun as we enjoyed a hot cuppa of the garden fresh tea. Refreshed, we resumed our drive to Gangtok, the state capital.

While the heavy rain back home was adding to the traffic woes and triggering a whole bunch of runny noses, I was enjoying the almost perfect mountain weather. The days were sunny and the evenings pleasantly nippy in Gangtok, the capital of Sikkim. The city itself was a pleasant surprise. The houses lining the street were not posh, but were all well maintained, freshly painted, with their balconies lined with flowering plants. The roads were not wide, but there were bounded by a well kept, covered and aesthetically designed side walk for pedestrians. The traffic was extremely streamlined and everyone drove in their own lanes. There were dustbins at reasonable intervals and there was next to no litter on the streets. Was it not for the quintessential 'Mahatma Gandhi Marg', I would have thought I was in another country.

The MG Road is the city's epicentre. Its a well maintained, pedestrian-only shopping paradise. The avenue is lined with shops selling merchandise ranging from expensive brands to export surplus, Tibetan antiques to plastic Chinese toys. I have spent my fair share of bunked dissection hours in Janpath/Sarojini Nagar, but never have I street-shopped in a  more delightful place than MG Road. The government has taken special steps to make MG Road a pleasant place so tourists can empty their wallets and make the state richer. The numerous fountains, flower pots and benches all along the street just add to the shopping experience. Not to mention that there are some amazing eateries along the way. I especially loved the Roll House which I frequented for my daily fix of cheese rolls and momos.

About an hour's ride from the city is the Rumtek monastery. As far as places of worship go, Buddhist monasteries are my favorite. They always have a serene atmosphere and at the same time, they present a rich burst of colour. The reds, blues, yellows and greens of the walls and the murals are just incredible. Rumtek is now tied in the first place with Thikse monastery, Leh on the official 'Best Monasteries Mana Has Been To' list. We reached Rumtek in time to catch the morning prayer. I found it quite interesting, unlike a little monk boy seated in the back of the prayer hall, trying desperately to stay awake.

One of my favourite aspects of the trip was the visit to Tsongmo Lake or Changu Lake. The original plan was to go to Nathu La but a week's worth of snow can play spoilsport to the best laid plans. We could only go up to the lake, which is about 10-15km short of the pass. The lake itself is at 12,400ft and it quite a sight. We had to trudge through quite a bit of snow, politely refusing yak rides to get to the half frozen lake. I had to trudge along even further to leave behind the horde of loud Bengali tourists. I eventually went around the bend and reached an isolated stretch where the snow was undisturbed, the noise was far away and the mountains were serenely reflected on the glazed surface of the lake. I might have gone further if I wasn't scared of sinking into the snow. I spent some time on that isolated spot, taking pictures and just breathing it all in till my dad found me and called me back for some warm grub. Maggi, momos and snow. Yes, life is good.