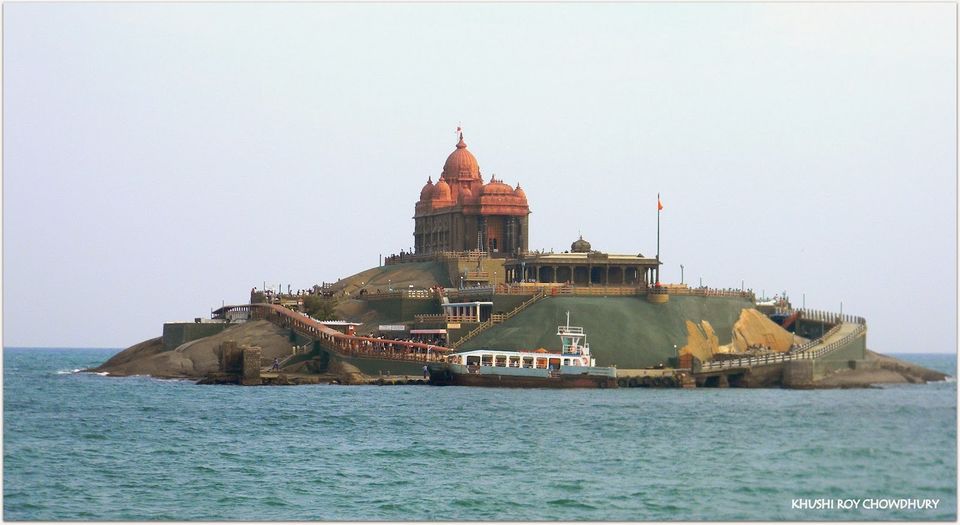 Maruthuvaz Malai... View from the car 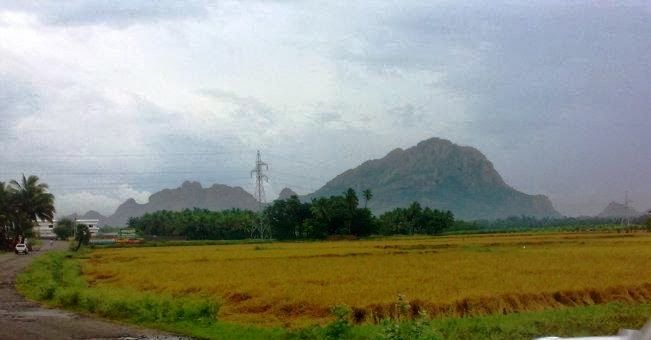 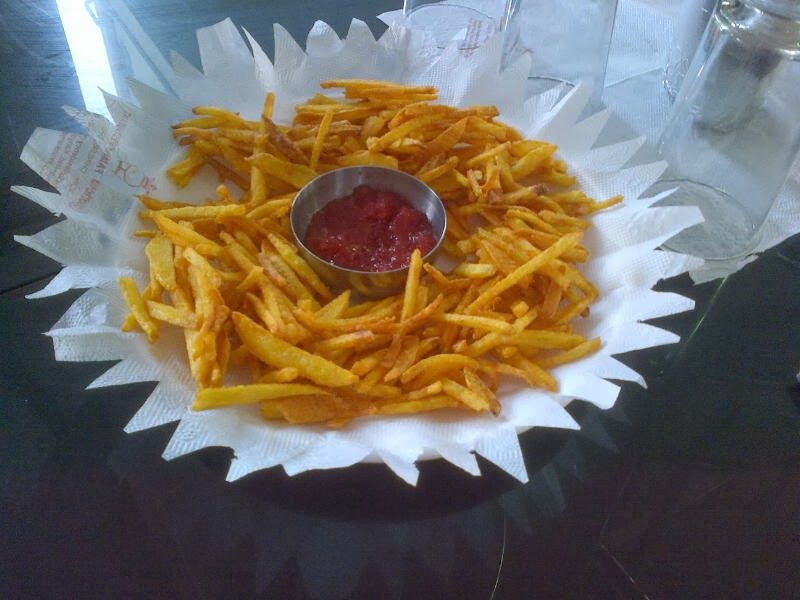 In Steamer and heading towards Vivekananda Rock 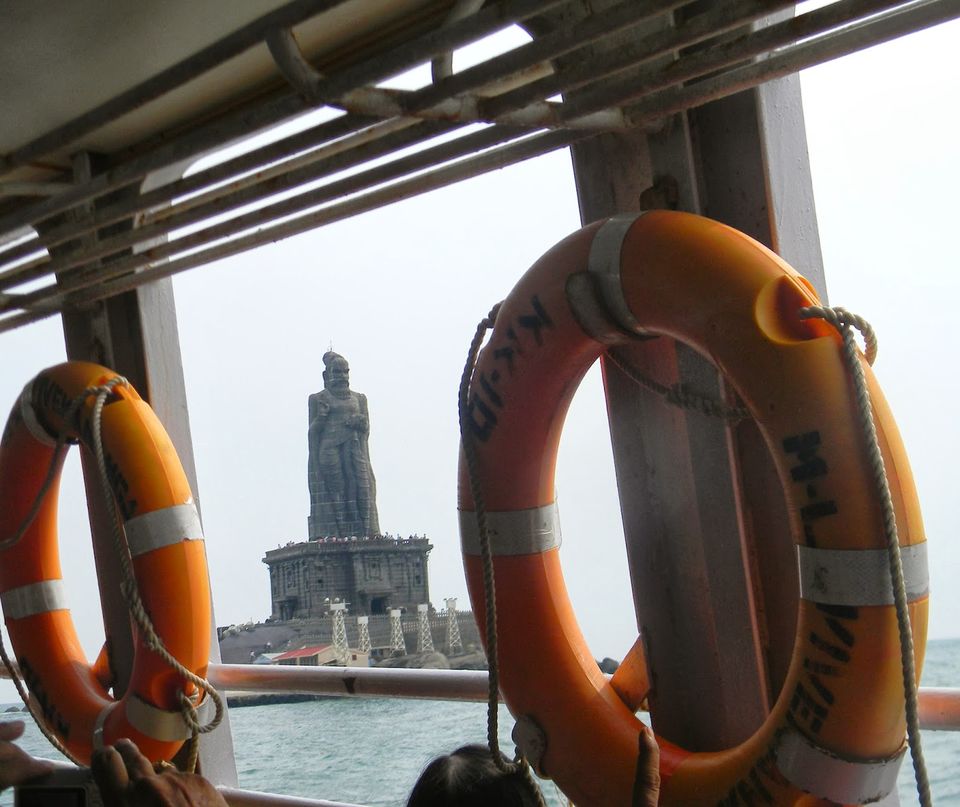 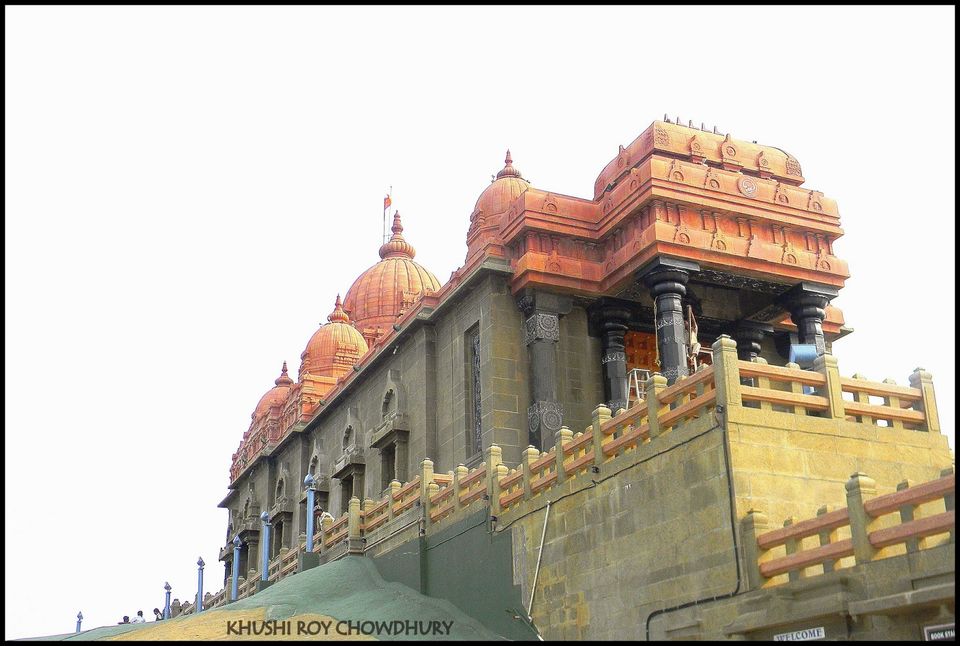 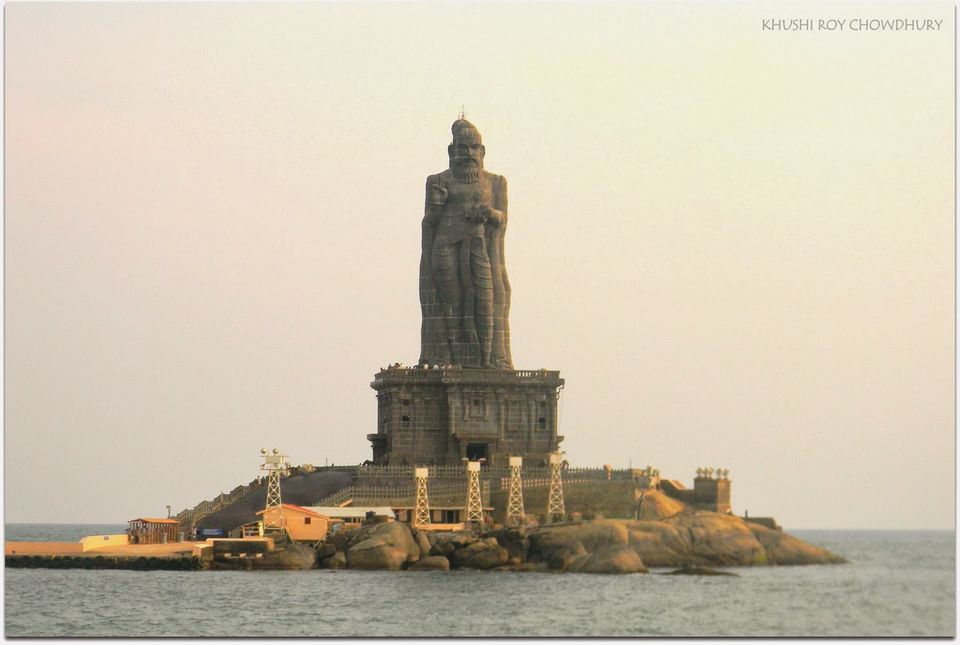 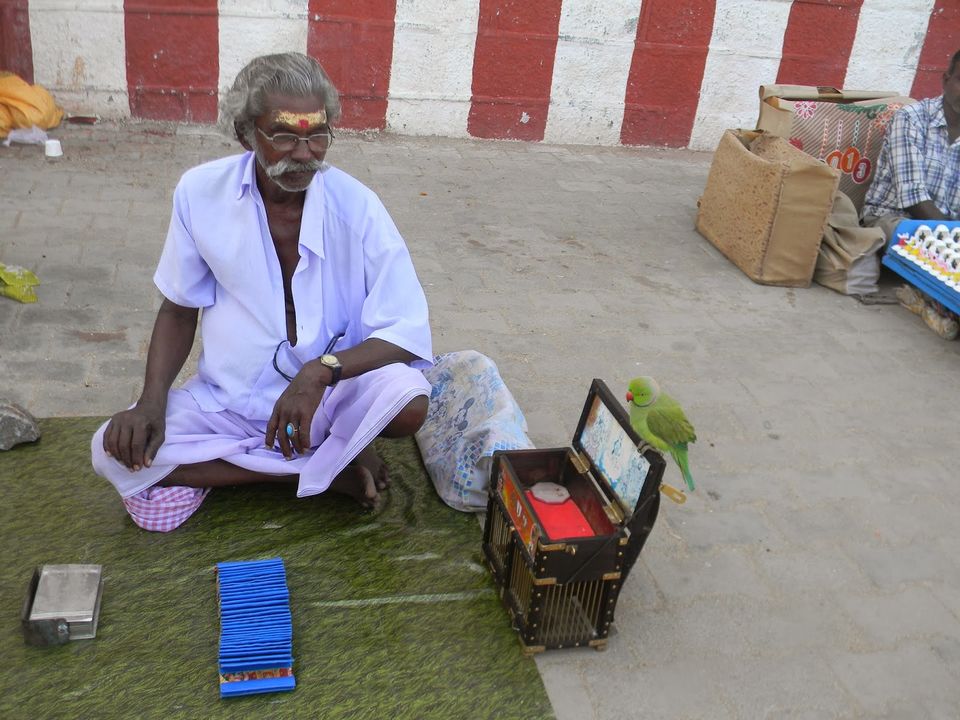 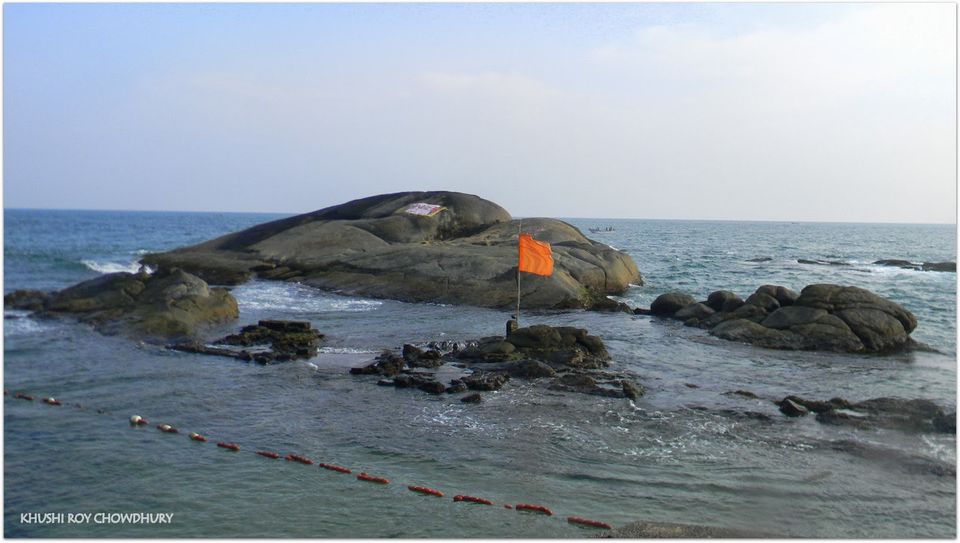 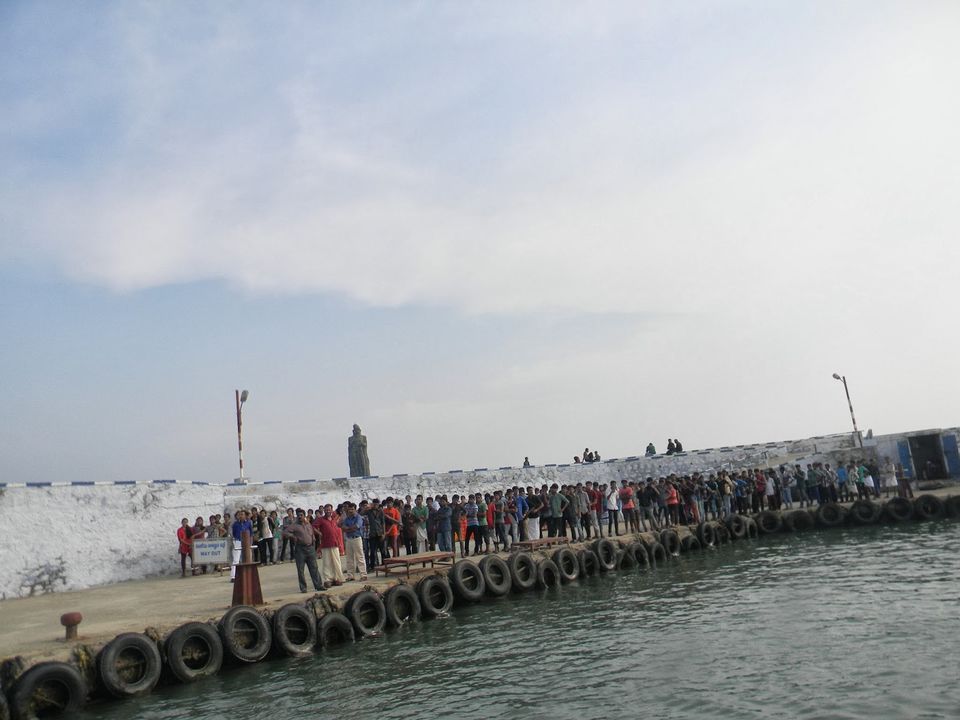 Both the rock memorials at the backdrop 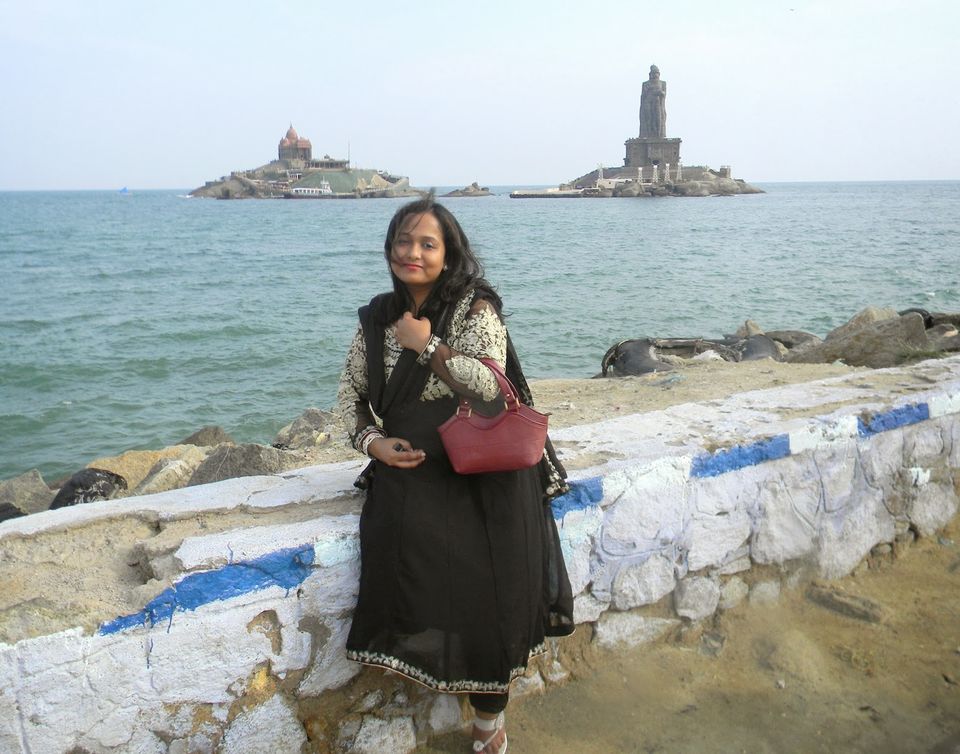 Kanyakumari was the last travel destination in our Kerala Trip Plan. It was the second last day of our trip. We were dog-tired by the long commute. The long drive till Tamil Nadu to visit Kanyakumari did not make sense somewhere. But I did not want to miss visiting the southernmost point of Indian Peninsula after covering almost 3,000 kms from Delhi.

On the way we got to see Maruthuvazh Malai from our car. Maruthuvazh Malai is believed to be a fragment of the Sanjeevani Mountain, which fell down here while it was carried by Lord Hanuman from Mahendragiri to Lanka for healing the fatal wounds of Lakshmana. It stretches for more than a km, reaching a height of 800 feet at the highest point.

We were starving by the time we reached Kanyakumari. We had some distasteful dishes in one of the nearby restaurants. Out driver had cautioned us that it is rare to find good food here. Check out the funny French fries we were served(IN PICTURES). It was so much like the Bengali side dish ‘Aalu Bhaja’.

After refueling our tummies we reached for the deck from where we bought steamer tickets to reach Swami Vivekananda Rock Memorial and Thiruvalluvar Temple. The name Thiruvalluvar took me back to the school days. I could recall studying the poem of this saint poet in 8th or 9th standard.

The only ferry between the rock and the mainland jetty was huge steamers taking atleast 100 tourists to and fro the rock at a time. Swami Vivekananda memorial rock is named so because, Swamiji swam to this rock and meditated on this rock for three days more than 100 years ago; precisely on December 25, 26 and 27, Year 1892. It is said that he attained enlightenment on the rock, and henceforth became a reformer and philosopher. The Rock memorial has a tall statue of Swami Vivekananda and two temples on each side of the entrance for Sri Ram Krishna Paramhansa and Maa Sharda Devi.

Kanyakumari derives its name from the oldest and the most ancient landmark in this town, the temple of Goddess Kumari who prayed to Lord Shiva to be accepted as wife by him. The rock holds its significance also because of the omnipresence of the holy foot of goddess Kumari. The Holy Foot is a foot shaped carving found on the rock and is believed to be the footprint of Goddess Kumari who stood on this rock on one leg and performed the Tapasya (penance).

There is a meditation hall and a Vivekananda store where you can buy books of Swamiji, calendars, key chains, Swamiji’s statues and other goodies.

The view of ocean surrounding the rock from all sides is overwhelming.The confluence of the Indian Ocean, The Arabian Sea and The Bay of Bengal can be witnessed from here. We sat on the rocky floors for a long time and soaked ourselves in the tranquility surrounding us. It was too good, too soothing to be here.

We boarded the steamer again and now we were heading towards another rock just few meters away in the sea from Swami Vivekananda Memorial Rock . This rock had a giant statue of Tamil saint poet, Thiruvalluvar. We were really tired and decided to skip going inside the Thiruvalluvar Temple. Our ferry took us back to the mainland Jetty.

After this we strolled around the nearby market and reached the Triveni Sangam; exact point where the three seas amalgamate.

Kanyakumari is a legendry town with fantastic places of high spiritual and religious significance. We could cover just a handful due to the time constraint.  It was sad to see that places like Triveni Sangam with such high religious and spiritual significance not so well kept.  The way to reach the Sangam was dirty and full of beggars and touts. We couldn’t stay at the Sangam for a long time due to the stench, litter and overcrowding touts.

Nevertheless, the place is a beautiful gift of nature and with a little care, the end point of the Indian Peninsula can be developed as a wonderful place for Heritage Tourism.

PS:- Kanyakumari is also famous for being a eco- friendly town. Plastic bags, disposable plastic plates, glasses and other plastic items are completely banned and you will actually not see these items here. Our was a ‘touch and go’ trip to Kanyakumari. We even missed visiting the sunset point. Kanyakumari is famed for its mesmerizing sunrise and sunset. We were not lucky enough to witness it  : (