The land of ruins and monkeys

By Married to a Beardo 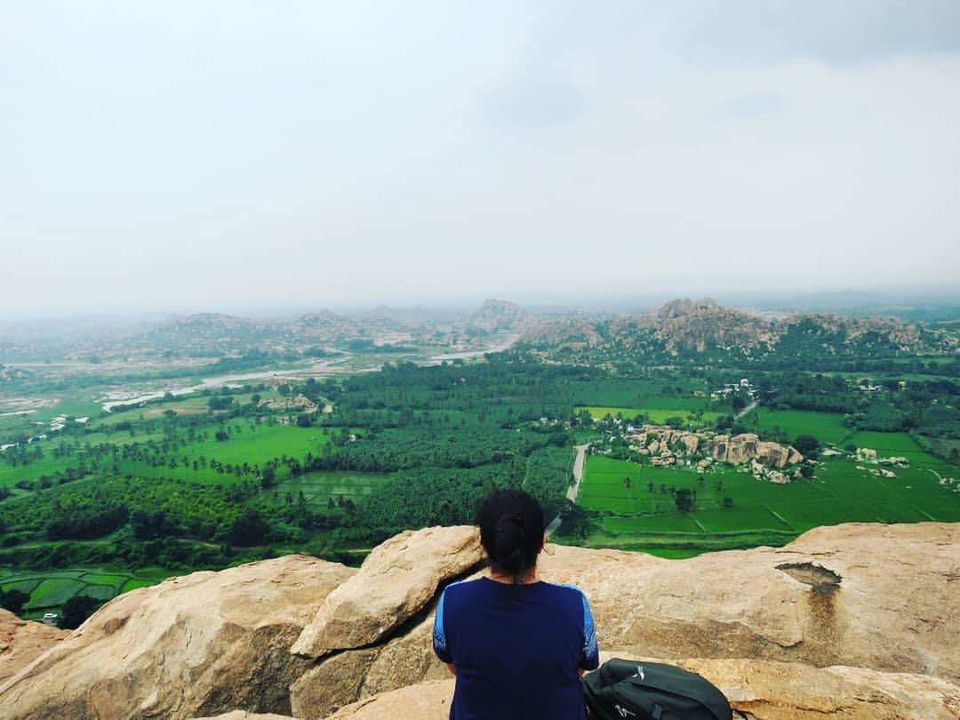 In case you have been following our posts, you might know that for us celebrations mean, traveling. We make it a point to travel to someplace new on our birthdays and anniversaries. So this time for Mrs. Beardo’s birthday, we decided to revisit history and take few lessons in hipsterism. We visited the land of ruins and monkeys- Hampi.

To make the most of the Dassera long weekend, we chose the bus as our mode of transport. So we reached Hospet at around 7.30 AM and took a rickshaw from there to South Hampi, the side that has most of the ruins and temples. We had to take a ferry to North Hampi, the hippie side since we had arranged our stay for all the 4 days at the famous Goan Corner.

Hampi, a UNESCO declared world heritage site, is located in east-central Karnataka and was the capital of the Vijayanagara Empire. Once known for its kings and its architecture, is today down to ruins because of the Mogul invasion. Hampi is also called Kishkinda, the birthplace of Hanuman, from the epic Ramayana. Apart from witnessing these ruins, a good number of travelers flock to Hampi for bouldering.

North and South Hampi are separated by the river Tungabhadra. You can either take the 5-minute ferry as mentioned above or choose a 16 km drive to reach the island via road. The first thing we saw as soon as we reached the banks of the river was Lakshmi bathing. Don’t get me wrong. Lakshmi is the famous elephant who blesses devotees at the Virupaksha Temple. The sight of her mahout bathing her was amusing and adorable at the same time. We stood there just observing her for a while. A while later, we boarded the ferry and crossed over to the island. From the other end of the bank, we walked to the Goan Corner, which took around 15-20 minutes.

The Goan Corner is a crazy place run by a crazier family with big hearts. Craziest of them all Mrs. Sharmila Thakur. She can intimidate even the boulders of Hampi, so don’t be surprised. Not to take anything away from the hard-working people there, but the entire place runs sheerly on her voice. More than Sharmila’s craziness, I would recommend this place, as it is for all kinds of travelers. While we were there people were even ready to sleep in the verandas, and that was sold out too. In case you end up in Hampi and you don’t have a place to stay, head to the Corner. If you are ready to adjust, they have a place for you to stay. The rooms were very basic but the food was great and the staff exceptional. 10 minute chat with them will tell you why people love the place. Many of them are loyal to Goan Corner.

We are not the kind who travel with a motive of ticking off all the sightseeing places from our list. So after much discussion, we decided we would explore the hippie side of the Hampi for 3 days and then dedicate the last day to the see the temple side. First day, I got my hands on the iconic TVS Super Deluxe, a moped bike. Though it was fun to ride it, now I feel bad for the bike.

We decided to start our entire exploration on a spiritual note, by visiting the Hanuman Temple in Kishkinda. Knowing that we need to climb 575 steps did not budge us (actually, it did a little) but we stayed on course. At the beginning we took a break after every 20 steps, but once we climbed 100 steps, the breaks came after 50 every steps. We clicked a lot of pictures and reached the top of the hill. We could see almost the entire South Hampi from up there. It was scenic. After climbing down I realized the sad truth. While paying my respect to Lord Hanuman, I also ended up giving him the keys to my bike. Yes, I dropped my keys in the temple. After a lot of struggle, a rickshaw driver helped us by breaking the lock and we were on our way. It was indeed an adventure.

Next day we went to the calm Sanapur Lake on a different bike. This time it was the Honda Navi (love that little beast). Throughout the course of the lake, you will meet some locals offering you a coracle ride. Mrs. Beardo was not at all sure of the idea but I guess my excitement was contagious. She agreed and we went along with Rangappa. Seeing us recording videos, he started to creative and he started making the coracle rotate at high-speed. I defied the crocodile warnings jumped into the lake for a quiet swim. But all I could think was about crocodile attack. From Sanapur we went to the Laughing Buddha for lunch and after some shopping, we were back at the Corner. After an awesome dinner, we retired for the night.

Since we did not have network, Mrs. Beardo couldn’t receive the traditional midnight calls from the family and close friends. I was feeling so bad that for a minute I was cursing myself for choosing such a place to celebrate her birthday. After breakfast, Mrs. Beardo cut a special Banana-Coconut-Chocolate cake baked by Sharmila aunty herself. She was kind enough to help me. This day was dedicated to the missus and we shortlisted the things she really wanted to do. We made a small halt to call and message everyone in a ‘network’ zone. And then proceeded to get her hair braided, later a crash course on ‘How to make dream catchers’ followed by a great lunch at the German Bakery. The evening was spent watching the sunset atop the boulders and taking the dogs of the Goan Corner on a walk. And my attempt on keeping her happy on her birthday was successful.

We checked out of the Corner and ferried across to the Temple side. We made a deal with a rickshaw driver and went around sight seeing. The architecture was so rich and so intimidating that we started to imagine that the characters from then were still hiding somewhere. Mrs. Beardo had an entire movie plot ready with her. Call us if you wanna hear it. We saw almost everything, but missed the Vitthal Temple. We reached a bit late. The entire temple side also makes you feel bad and angry because Vijayanagara never recovered after the invasion.

The rickshaw driver dropped us back at Hospet and once again, unwillingly, we boarded the bus back to Bangalore. And thus we pulled the curtains to an epic birthday celebration.