An Ecstatic Trip To The Neelakurinji Blossoms Of Munnar, Kerala 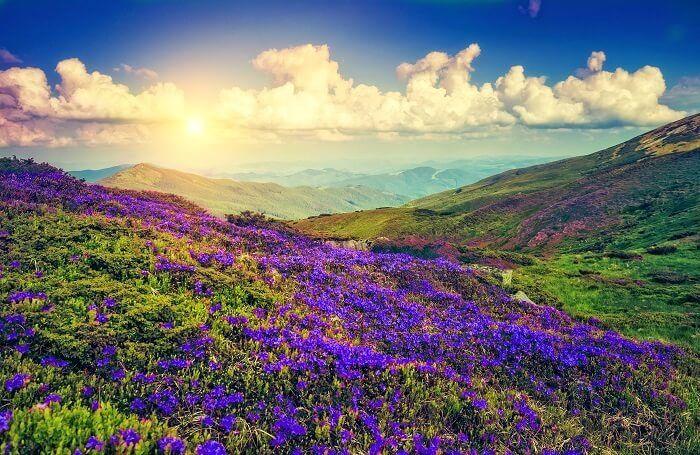 Kerala is one of the most beautiful destinations in the world. This southernmost coastal state of India is divided from the other geographical area by the mighty Western Ghats that gives the state a diverse and beautiful topography. The lush green mountains, misty rolling hills, cascades, backwaters, beaches lined with coconut palm trees and spicy food make the state a complete package for eco-tourism. The state enjoys a moderate climate all the year round, and the maximum temperature registered is around 350C. I visited the state during September 2018, and my plan was primarily to view the beautiful “Neelakurinji” or Strobilanthes Kunthiana blooms at Munnar, Kerala that flowers every 12 years. My budget was INR 15000 including the airfares and food.

I arrived at the CIAL airport, Kochi Kerala which is one among the 4 airports of the small state Kerala. Though private taxi services are available, I opted for a public transport bus, KSRTC run by the Kerala government. I chose a public bus so that I can observe the lives of people in Kerala. When I entered the bus at 4.00 am, I found that women had a special reservation within the bus and the conductor of the bus was also a lady. The bus was a direct service transport that plied from Kochi to Munnar through Neryamangalam and Adimaly. Kochi has a plain topography, and it is a coastal city. But, when we entered the district of Idukki, I could see the hills, mountains, and waterfalls in the morning light. I could even see the beauty of the morning and the sunrays coming through the mountain gaps.

The bus arrived at the Top Station by 8.00 am. The environment was too cold. I had the breakfast at the Hill View hotel at Munnar and got ready to visit the places. The Neelakurinji blooms are along the hills and valleys of Eravikulam National Park. I took a taxi from the hotel to the park. When I first landed the place, I could not believe my eyes. The bluish-purple flowers were waving their heads with the cool breeze, and the whole valley seemed to be the soft waves heading towards the spectator. I could not take my eyes off from there. I spent nearly 1 hour time here. The breeze, the mist, the flowers take your breath. The sight was exotic and divine. We were not allowed to pluck any flower from the valley, though we could take long promenades along the path.

I also visited the Mattupetty dam which is a reservoir of the hydroelectric project Kerala. The dam is built across the beautiful mountain ranges of Idukki, and it offers a panoramic view of the Neelakurinji. I spent nearly 1 hour here. The echo station is located on the way to the Top station of Munnar. The point is in the highest hilly ranges where you can have your screams and cries echoed back. Thus the place got the name, echo station. I spent 1 hour there. Top station is a hill station where the entire hills remain green and misty throughout the year. It was the uppermost railway station during the colonial reign. The spot is 1700 km above the sea level, and now it is also a viewpoint of Neelakurinji. The place offers a stroll into the abundance of the dense forest featuring a wide variety of flora and fauna. So it gets difficult to take your sight away from these heavenly views. I spent around 3 hours there sightseeing and trekking along the hills.

After spending the evening through the tea plantations, I returned to the hotel Hill View. The serene beauty of the place moved me so much that when I went to sleep, I could still dream the Purple blossoms welcoming me.