Backpacking in Kerala: the road to Mallapalli 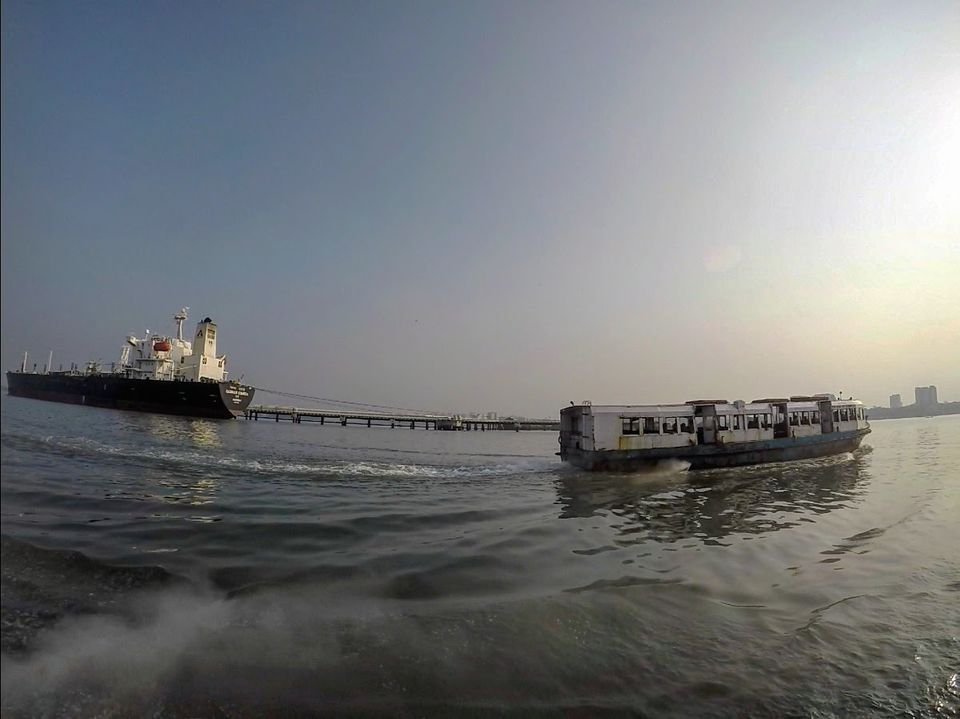 Last month, George Ezra released a new album after a three-year wait, and I was possibly more excited about it than his mother was. I listened to it once, then twice, and eventually more times in a day than I can count on my finger tips. Most of his music was about touring with his band, enjoying being on the road, and eventually coming back home to unexplainable anxiety. Turns out, George and I have a similar fear of staying at home. He too feels lost in known surroundings, bored with the familiar. Though I empathised with him, I couldn’t help but smile and tell myself my troubles aren’t so out-worldly.

To suppress this urban anxiety, I decided to take some time off from work and travel to Kerala. Somewhere in the middle, I’d have to celebrate my birthday as well, but I’d be more than happy to treat it like just another day, save the sudden spike of activity on my Motorola iron lung.

Kochi airport on the other hand, is far from metropolitan ruckus. The arrival area seemed more like a sizably huge metro station in the wee hours of the day. It was still 6:30 am, so I decided to cab to the city centre and enjoy whatever was left of the day’s sunrise. Ola and Uber have yet to enter Malyali conscience, and I wasn’t in a position to bear that expense, so I got off at Aluva Railway Station, much to the dismay of my cabbie. With a ticket worth ten rupees, I was transported to Ernakulam Junction, the heart of the rail network in Kochi. It was still quite early, so I decided to walk around the Fort Kochi area, which was a four-rupee ferry ride away from where I stood. With four rupees in Gurgaon, I couldn’t even afford a piggy-back ride to the dining table from my bed, and here I was treated to a fifteen-minute cruise from one bank of the city to the other, with views of cargo ships, canoes, and swooping eagles. 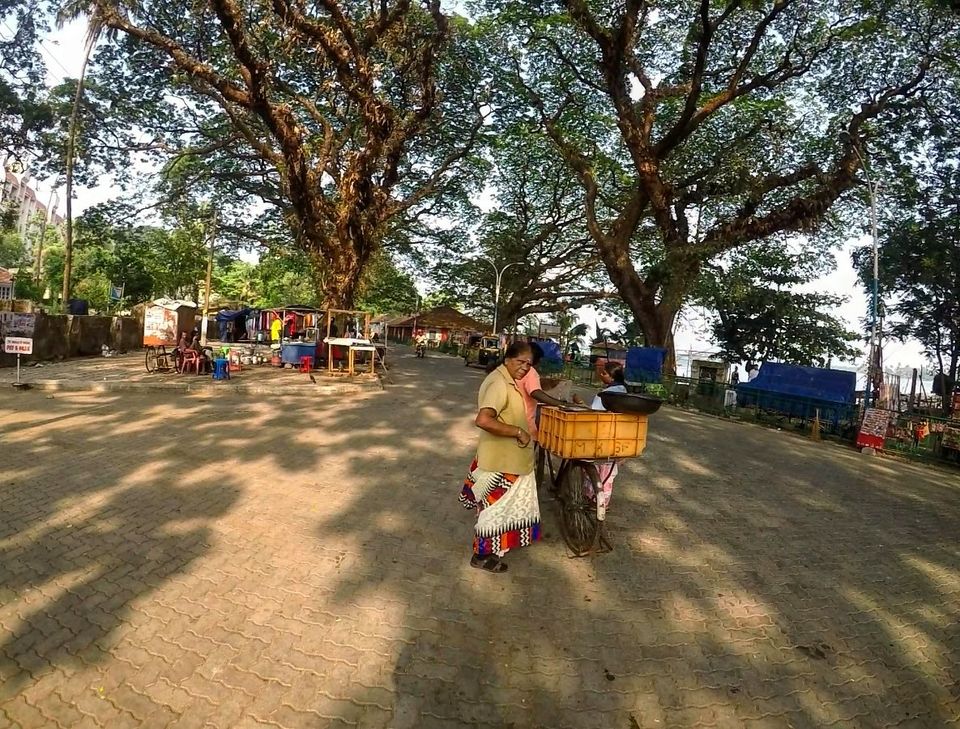 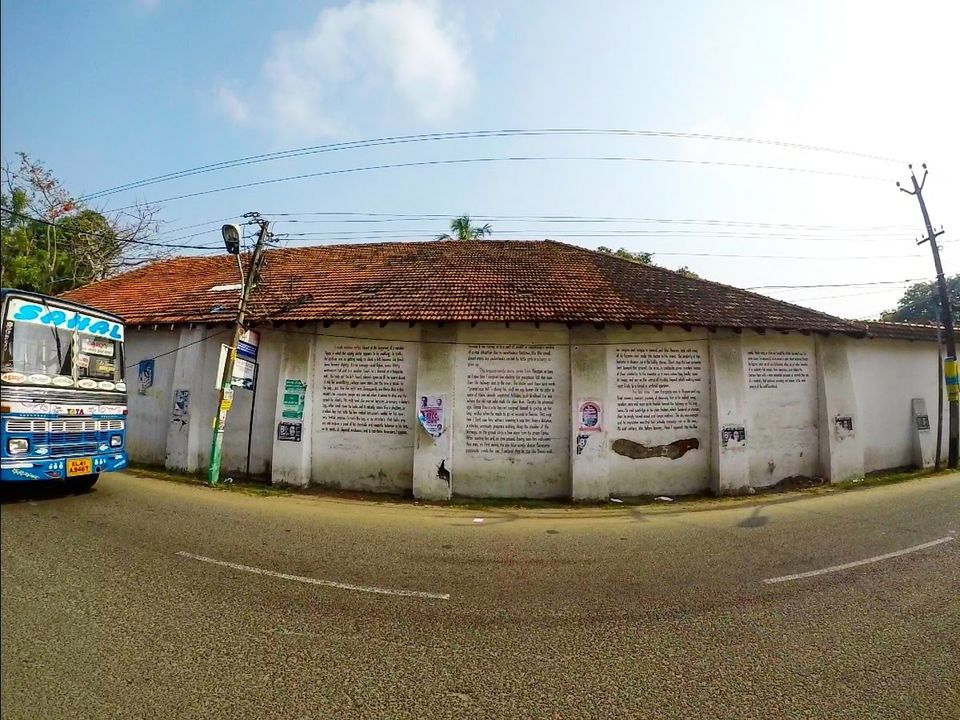 While I waited in line at the boarding gate in the Delhi domestic airport, a billboard above read ‘You are in the world’s Number 1 airport’, and had an unidentifiable logo with a golden trophy beside it. Having waited for fifteen minutes past schedule and no one around to acknowledge the unwarranted delay, this billboard hardly knew what it was talking about. Skytrax’s annual survey in particular was in complete disagreement. With a participation count of around 13.73 million air travellers across over a hundred different nationalities, the survey is considered to be the longest annual global customer satisfaction survey. According to the 2017 statistics, the top four airports were Singapore Changi, Incheon, Tokyo Haned, and Hong Kong. India’s airports were nowhere near this south east Asian monopoly. An Indigo employee finally decided to identify himself and walked into a tirade of questioning by my fellow travellers. With such orchestrated chaos, it only seemed fair that Delhi enjoy its humble sixty-sixth position.

The main aim in Fort Kochi was to relieve myself, with a secondary objective of buying a phone charger. It was customary for me to forget something at home, and a charger was a reasonable offering. Since shops were yet to begin trade, I walked on the kilometre-long pathway along the ocean and then to the interiors. The ocean side was more of a promenade similar to Bombay’s Marine Drive, where I’m sure hawkers flock in large numbers looking for the day’s best catch. The architecture seemed familiar. After a whole year of describing homestays at work, I could differentiate Kochi’s tiled gable roofs from it’s cross-hipped roofs. The exteriors were mostly painted in vibrant yellow and draped with lush creepers; the buildings in general were one earthquake away from becoming derelict. I wanted my debut dump to be an elite experience, so I delayed myself to no end, smoking cigarettes and sipping on hot sugar with a hint of milk tea. After a grand wash-up in a posh hotel, I shared breakfast space with a group of Naval cadets, who were busy discussing expenses if one of them got transferred to Japan. We were all in the same boat at this particular breakfast bar. 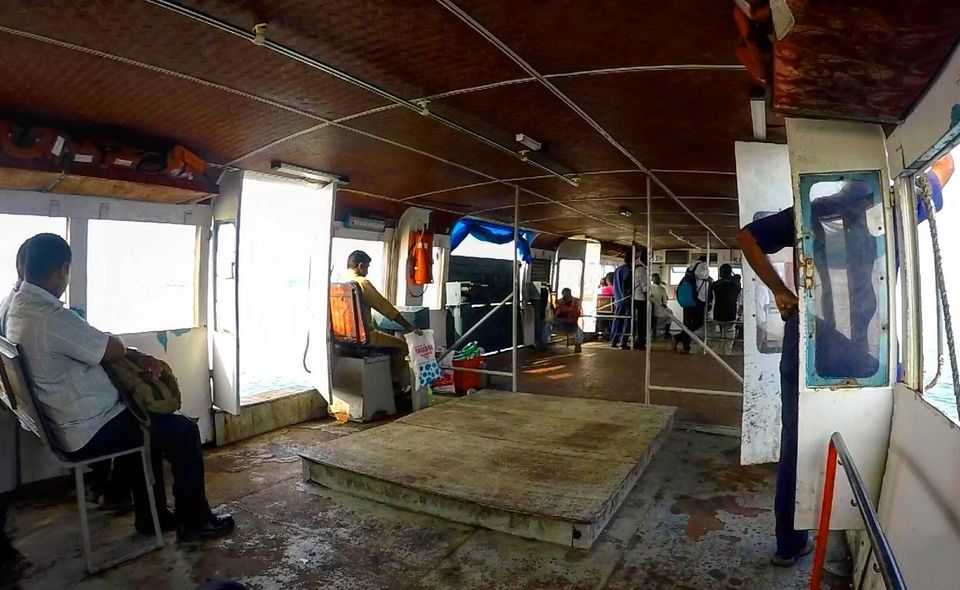 In my hours in Kochi, I’d taken a cab, a train, two ferries, and an auto, and in the hierarchy of the vehicular kingdom, the bus had been the worst yet. If I had my bike with me, I’d have made this five-hour journey in under three. There’d be no one to question the why, what, where, and how with regard to my chosen chariot. But I was in no position to complain. I had promised myself I wouldn’t cringe and groan about travelling without a bike, so as to learn new tricks of the road and understand what it means to ‘chill’ on holiday. By the time the bus reached Kumarakom, it was late evening, and the town was nearly about to call it a day. Kerala goes to sleep at 8 pm without fail, so there’s hardly any room to rage. I walked across the main street, but found nothing particularly interesting. Maybe the beauty was tucked away in the interiors of the tropical foliage that flanked the road, but after an overnight flight and two dreadful bus rides, I just couldn’t be bothered.

Here on, the itinerary suggested meeting Piyush, an ex-colleague at work who’d just shifted to Kochi. Given the frequency of him bunking in my house, it was only fair that he come pick me up and escort me to my quarters in his house. We drove to Mallapalli, a quaint town near Kottayam, where nothing exciting ever happened. The drive was broken by heavy rain, and the road seemed to glitter after the downpour. Rubber-coated curvy climbs in pristine condition, dotted with systematic reflectors every two meters made for some high-definition tarmac porn. The government hands road construction projects to third parties, who are responsible for maintaining its quality for five years. So instead of making an average road mixed with one spoon of bureaucracy and two shots of bribery, the builders just ensure the roads are of supreme quality, so no work would be needed on them for five years. Is that fair play or a stalemate, I wondered. 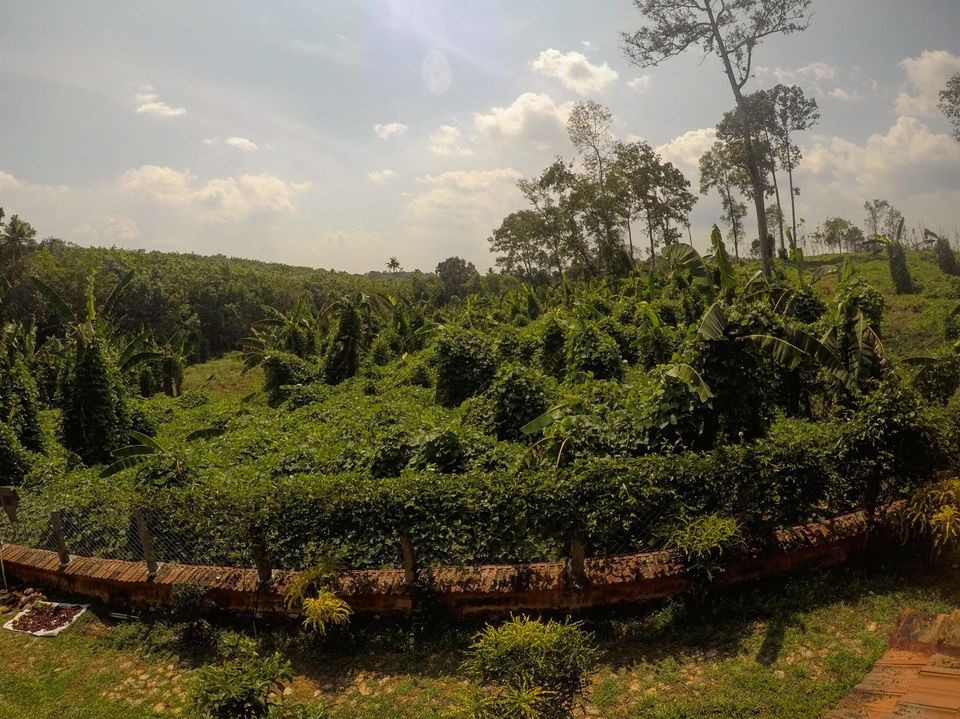 I’d had enough of Kochi for now, and hopped onto a state bus to Kottayam, and then one to Kumarakom, a quaint backwater Shangri-la. The five-hour bus journey made me remember how much I detest this mode of transport. For sixty rupees, this particular bus stopped about 176.53 times over the 72 km I was tortured through. It would change to second gear and prep to pick up some pace, but by then it would be time to stop and drop. What’s worse was that I’d got on with a fairly large bag and failed to find a seat on both buses. The female conductor on the twelve-buck bus to Kumarakom scolded me in Malyalam for bringing a rucksack as a plus-one. The overhead storage rack was too narrow for a rucksack, and there wasn’t enough space under the seats. This ball of cloth was occupying an entire person’s space in the aisle, and a chance for KSRTC to earn an extra fifteen rupees, at best.

The Abraham’s have turned their property into an old age home and I was the youngest entrant to this visual delicacy. The establishment, named Oor, is built entirely from recycled resources, and qualifies for a Limca record for being the largest of its kind in the country, if only one of the Abrahams decided to do something about it. If you add bathroom towels, essential oil burners, and a redundant air-con in every room, Oor could very well pass off as a new Taj project. High ceilings, a spiral pathway in the elevated courtyard, and rustic interiors all makes it one hell of a place to go off the map. The property sits peacefully surrounded by fifty acres of church-owned land, which was a grand layout boasting wild growth mixed with carpets of rubber and tapioca plantations, and the occasional coco palm. I’d venture out in the evenings for a walk in the forest farms, trying to differentiate between white balance and ISO on my GoPro as the sun set over the horizon. Mallapalli was strewn with verdant vistas, each a marvel of nature’s workshop. 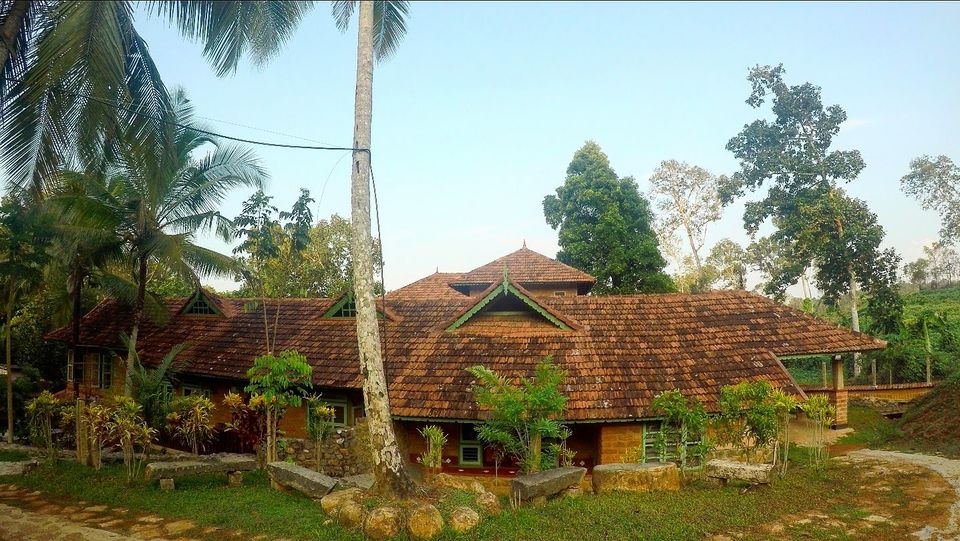 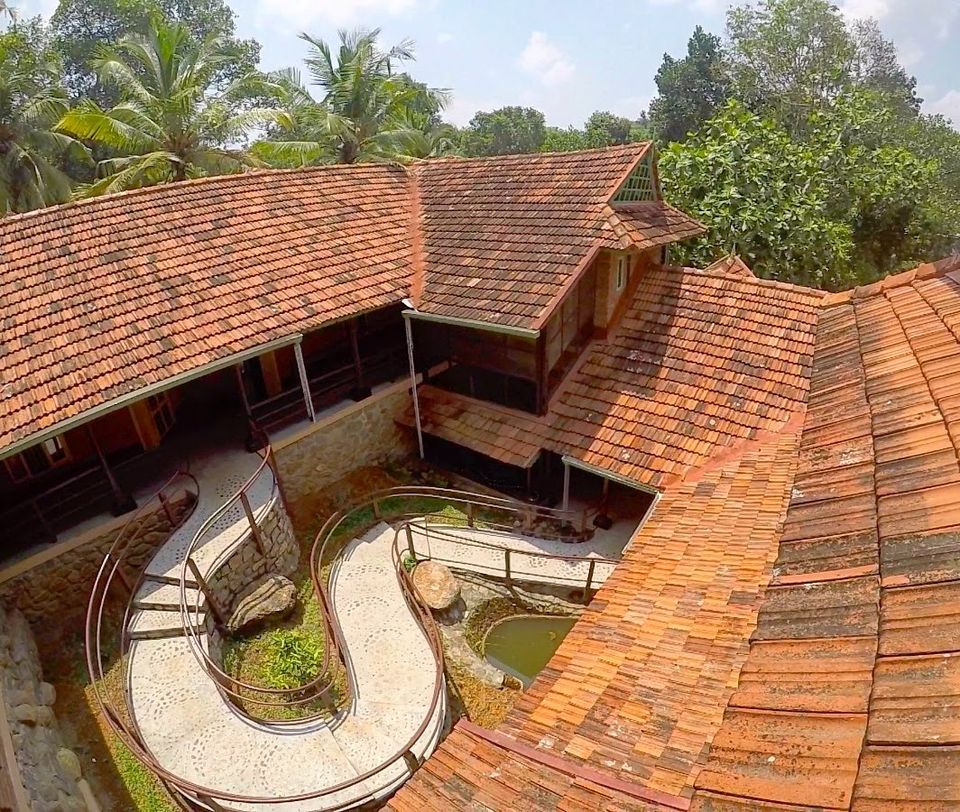 Early in the mornings, the entire house would be ringing with guitar riffs from Pranav’s room, and both brothers would sit together and jam before breakfast was served. For me, it all made for a rather melodic visit to the throne. When the electricity would go off, the music would start playing, and the oldies would shimmy till they dropped. The nights were equally startling. I was forced to stay an extra day due to a state-wide strike, so we went for a dip in the local river, got treated to a fish pedicure by the native species, and came home to a star-studded sky as fascinating as one you’d find up in the mountains. This is what I missed in Gurgaon. 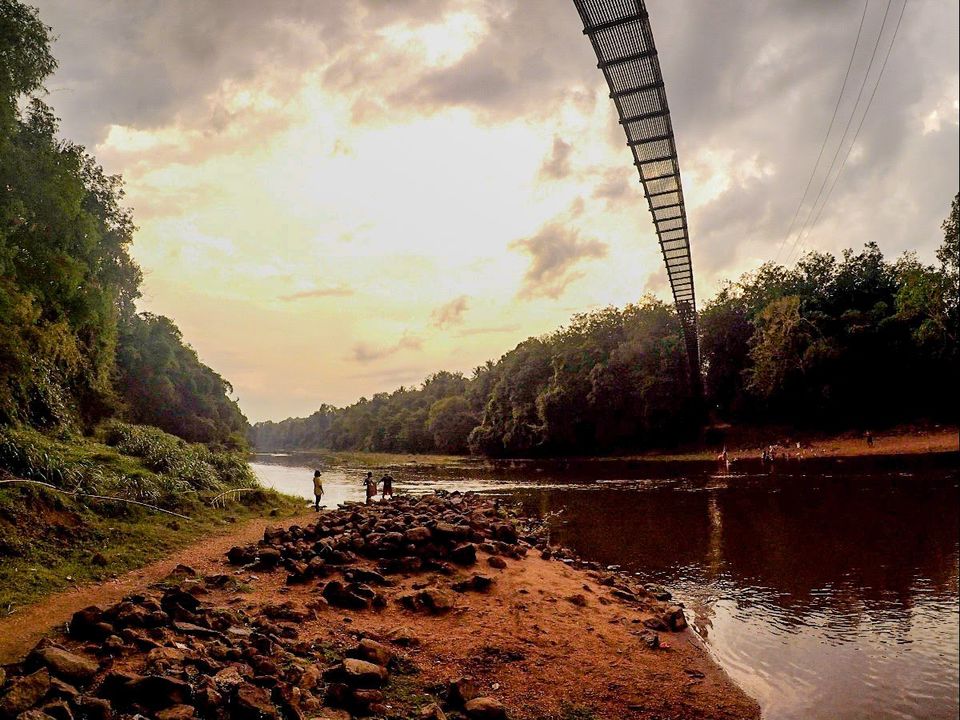 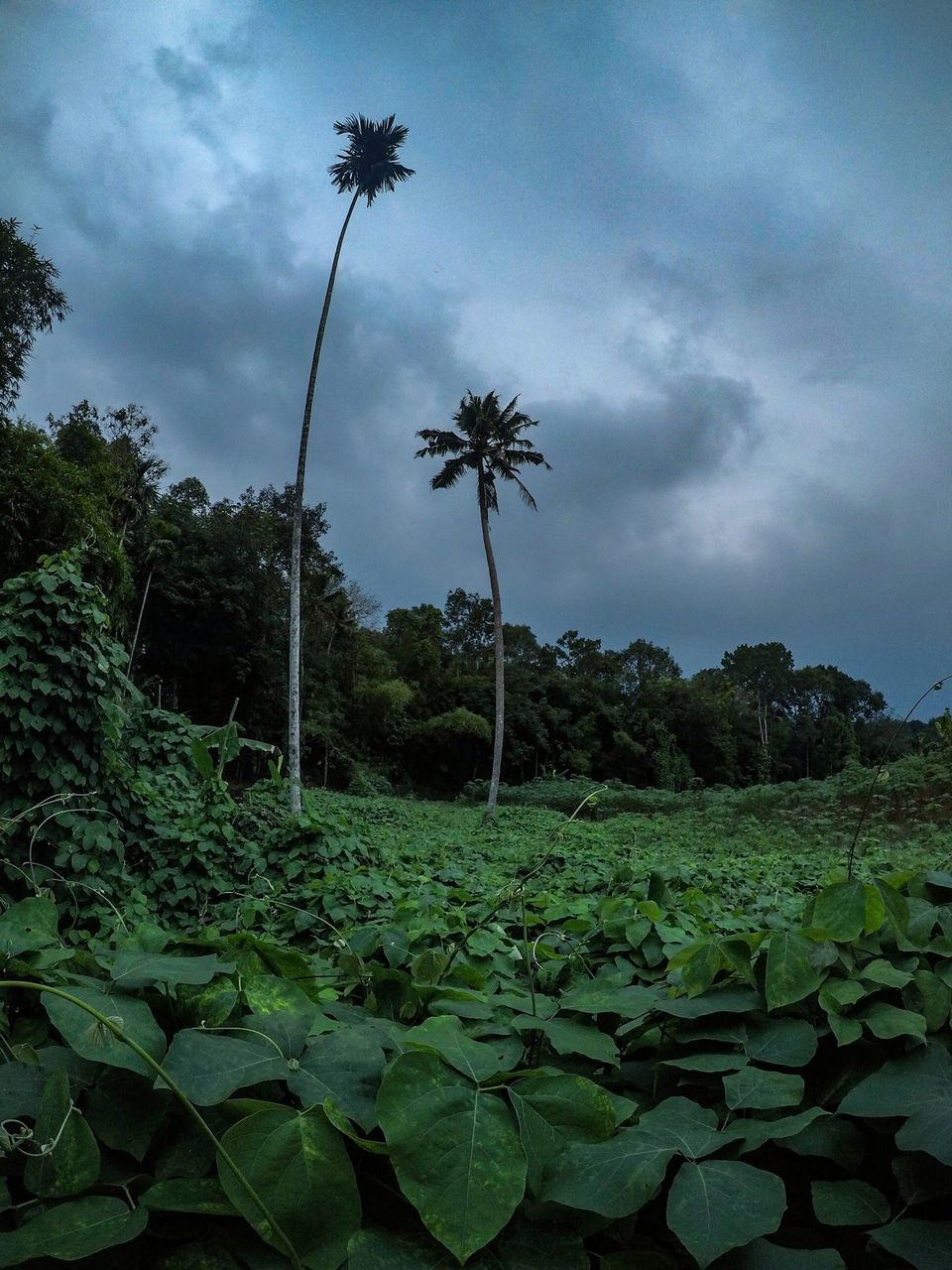 In my days at Oor, I realised I don’t have to try so hard to replicate my bike tours. It was fun to kick back and do absolutely nothing. I didn’t have to relive a day of biking by walking ten kilometres, or roaming around in town with my rucksack the whole day. But then again, the joy of lounging or walking is a personal experience. Writing about it isn’t much fun.