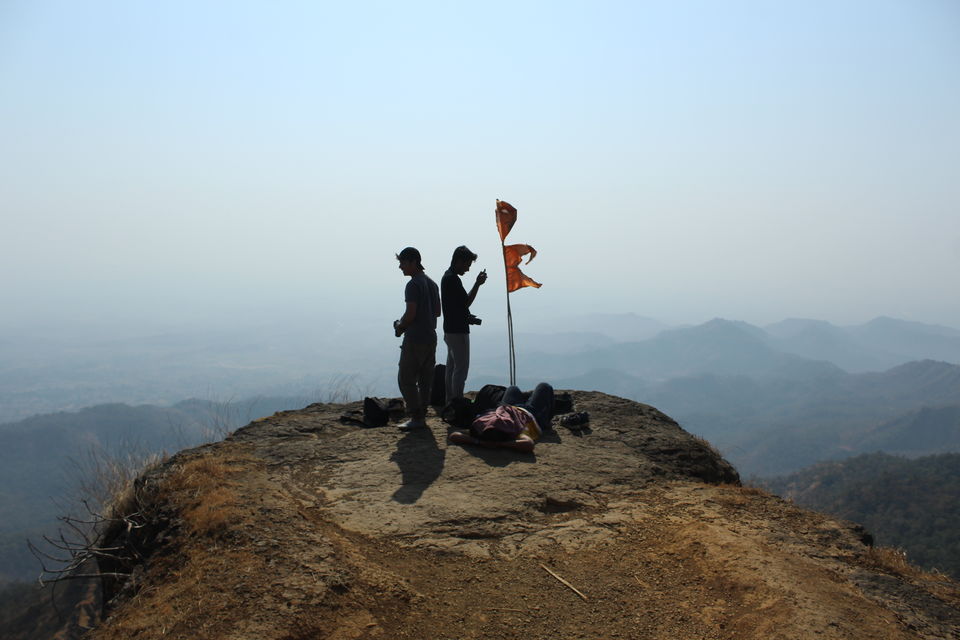 Tired of the stock pile of law entrance exam books lying around me , this plan was like my small getaway from the monotony of studying .

As decided in prior , a friend of mine named Mohit and i caught the train from C.S.T station at midnight , to our destination , Asangaon . Gaurav and our experienced travel friend / guide , Rohan caught up with us on the forthcoming station .

Funny memories incidents kept us preoccupied and unnoticed of our long , brisk train journey but our excitement and the train came to a halt with the traffic in our train line cause of a incoming train from Punjab

I reckoned it was a small glitch in our trek which wouldn't would be quick fix, but it went completely contrary to my thought .We ended up waiting restlessly for three hours at a station with vaguely funny name called , Titwala , which was two stations away from our destinations and there wasn't any other means of reaching our destination apart from our train . The train driver started the engines of the train and switched it off, to keep the train engines warm , but we imagined that it was the train driver's fetish to give us hope by starting the engines and then switch off the engines as well as our hopes of trek . During endless criticism about the Indian Railway , the red light on the signal post started flickering and turned green stating the traffic was cleared , it was probably the happiest we ever been on seeing the colour green which was ironic as we had passed through the best green scenic beauties during our journey which we didn't to give a mental credit to.

In about thirty minutes we reached our destination , Asangaon, it was secluded and deserted station with nucleated crowds under the warm cement cape of station roof wearing thick coats and shawls ready to head for work in the metropolitan. After asking the locals the way to the nearest rickshaw stand , we were lucky enough to find a polite ,humble rickshaw driver who agreed to leave us till the mountain base for half thee price quoted by most auto driver for the journey the base point . The path cut through the national highway and cut through the rough rocky terrain of the the rural landscape which had scattered bamboo huts during its course on either side of the path extending to the base point .

On reaching the base point the kind Auto driver left his phone number and told us we could call him during our descend for him to pick us up . It was a huge boon as it was a long journey from the station to the base point without any other means of travel plying on those roads. Rohan advised us to wait for a little daylight as during early dawn important signs or directions wouldn't be visible, leading us astray . By around 6:45 am the first ray of sunlight peeked through the trees with a warm welcome signalling us to start our purpose of the journey.

The beautiful landscapes ushered new beauty as the sun's rays fell upon the cream coloured long, dried grass which was one of colours of a beautiful frock worn by the mountain. The path extended to bridge which extends across a dried up stream which is flooded with fresh water and small fishes as said by rohan , who had visited the destination in the monsoon .The combination of loose and hard stones continued all the way up til the man made railing for a little assistance while climbing a little higher. .Our ascend was accompanied by a picturesque sunrise showering its light on the taller mountains accompanied with a tangy orange colour which blended into the dark blue dawn sky from the horizon . This compelled us to remove our camera and capture the everyday sunrise from scenic landscape as the foreground .# Soon the weather was getting warmer with each passing hour as i removed my scarf and then my jacket . The sweat rolled down our forehead and brow as we continued our ascend reachingthe halfway mark by around 9;00 am , physical strain with an empty snack led us to take short pauses which included drinking little water and a small snack for energy. As the ascend continued, ascend became steeper and this little slips which my friends advised i should walk with my feet facing outward for better grip .During our ascend , our friend mohit was lucky enough to survive a minor injuries from a rather difficult situation he got himself into . He was stuck in between two ridges, unable to climb any further he cried for help , rohan tried helping him by passing a stick for him to hold on to but he slipped and slided to a boulder which he held onto for his dear life , hadn't that boulder not been there to hold onto he would have sustained serious injuries.

#The view kept getting better with each high point but as we climbed up the ladder to reach the peak . It involved happiness , content , sense of achievement but

my expectations cause of its least momentary expectations . But on glaring at the orange flag waving steadily in the wind was a feeling of conquer ,forgetting every bead of sweat on my brow and my parched mouth i just screamed with joy.

We then went onto explore the ruins of shivaji's fort which shockingly has a freshwater supply in a pond the whole year which is an interesting architectural design . #

It was past 12:00 in the afternoon when we started our descend the water we filled in our bottle was futile as soon as we finished half the trek . we had to place our legs in a cross manner for maxim grip and control under the slippery gravel and to avoid plunging into our own deaths during our steep descend down the hill.we were helpless for major part of the trek as there wasn't any trees whose shadow could shelter us from the sun's hot blaze which was directly vertically over our head. It seemed like a long and endless trail of misery as our clothes got soaked with sweat and our legs started to quiver with exhaustion .During this period i became cynical as well as pessimist due to irritation caused by exhaustion probably , i started noticing the ashes of the forest fires and the deforested trees during the descend . My optimism and zest had ignored these untold stories of the forest and i was glad i got to know both sides of the story not being oblivious as well as not being considerate of the other side.

As we neared the start point we called the auto driver to pick us up from the start point , we were glad to see him when we completed our descend . every trek presents a new challenge, a new problem , a new learning and new outlook . Every human being irrespective of his/ her age, sex, religion etc learns something throughout his/ her course of life.Life in general for every human being like a climbing a mountain in which various experiences either removes or adds a defect to make a person learn from either his past or to help him learn something in the future. Like a climbing a mountain life grooms a human being with passing time. To conclude my learning from this experience i feel a trek is a training / practice session for life and climbing a mountain is a metaphor for life as a whole

Written by my Friend - Reuben Thomas