Mumbai Travel GuideMumbai TripsKailash-Mansarovar Yatra – Is The Visit To Lord Shiva’S Towering Abode Worth Your Life?

Kailash-Mansarovar Yatra – Is the visit to Lord Shiva’s towering abode worth your life? 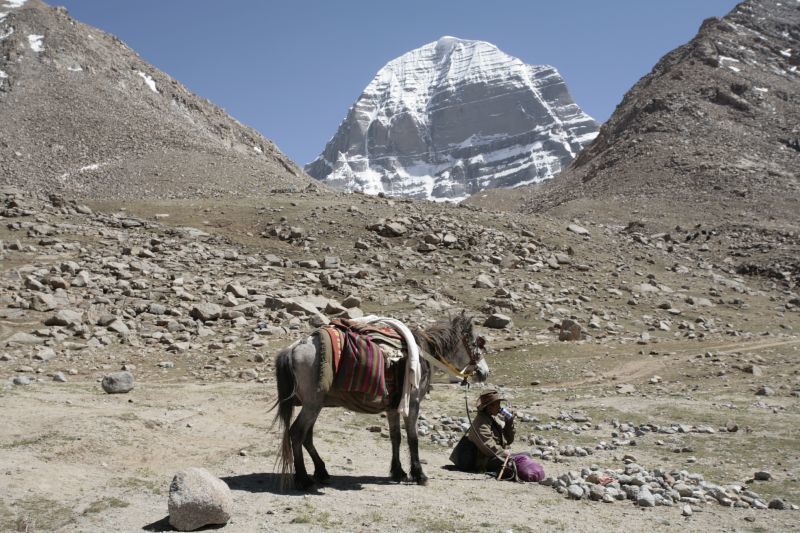 What about planning a trip to Ladakh? The altitude is no joke, and there will always be a moment where you wonder how your body will react to being 3.5 kilometres above sea level. Well, put those two scenarios together, and you have the Kailash-Mansarovar yatra.

Standing at 21778 feet above sea level is the mighty Mount Kailash, and at its feet lies the Mansarovar lake, still at a lofty 15060 feet; both situated across the border in Tibet. The former is believed to be where Lord Shiva and his wife Parvati resided, and the latter was created by Lord Brahma and is one of the most sacred bodies of water in Hinduism. It is said that a parikrama (trekking the circuit round the mountain) around Mount Kailash and a dip in the holy waters of Mansarovar are enough to cleanse your body and soul of all your sins.

The price for nirvana

While this sounds like, and very well is, a life-changing, transcendent experience; the beauty and sanctity of the location comes at a price. The conditions are inhospitable, and the journey arduous. With long drives across the Tibetan plateau and ranges of the Himalayas, and having to traverse across steep slopes, it’s definitely not an easy feat. To top it all off, let’s not forget that altitude. The human body is not used to functioning at such heights, let alone making a 52-kilometre journey on foot at 19500 feet. Altitude sickness/acute mountain sickness (AMS) sets in due to the decreasing amount of oxygen in the air for the body to utilise, with primary symptoms of nausea, fatigue, headaches, dizziness, and swelling; it can even cause conditions like fluid accumulating in the lungs or swelling of the brain; that can ultimately lead to death. Of course, this can be prevented and treated; however, factors like age, physical fitness, health conditions, and others, affect the onset of AMS, and it can happen to anyone.

To prevent such cases from occurring, India’s Ministry of External Affairs (MEA) organises the yatra from June to September, through two routes. Before even packing your bags, there is a selection process that takes place by the Ministry itself. With over 17 medical tests and screenings made mandatory in 2017, only those that are deemed physically fit by the MEA get to depart. Applicants suffering from heart diseases, asthma, diabetes, high blood pressure, etc. are generally rejected, along with those below the ages of 17 and above 70.

In 2017 alone, almost a thousand pilgrims (of the 4,442 that registered) made the pilgrimage to Kailash-Mansarovar. A high percentage of these pilgrims come from Uttar Pradesh, where one of the first schemes the new Chief Minister Yogi Adityanath launched in 2017 was the Rs. 1 lakh support to be awarded to every Kailash-Mansarovar yatri from UP. Everyone loves a good freebie, which is why UP has continued to have the maximum number of pilgrims from any Indian state. Monetary incentives aren’t the only way Indians are led on the path to Kailash-Mansarovar. Every year there are numerous messages sent via e-mail and text messages by some dodgy tour operators, that promote Kailash-Mansarovar tour packages at cheap rates. While it is good to see many people getting to fulfil their life-long dream, all is not as it seems. Many pilgrims face a rude awakening once they reach the destination due to the mafia-like system between the various parties at play, and the travellers’ wellbeing is left at the bottom of the priority list. To get a credible opinion on the same, I contacted a former Major General of the Indian Army who experienced these issues first-hand.

Major General Mrinal Suman, a highly qualified and experienced veteran of the Indian Army, is currently the head of the Defence Technical Assessment and Adivsory Service of Confederation of Indian Industry. Having commanded an Engineer Regiment in the Siachen Glacier area, he is no stranger to the Himalayan conditions. Maj. Gen. Suman made the Kailash-Mansarovar Yatra in 2014, and suggested that I refer to the blog-post he wrote about the journey.

“The whole yatra is controlled by a mafia network that involves tour operators, hotels and the airlines. Safety, comfort and welfare of pilgrims are totally neglected.”, he writes.

Maj. Gen. Suman talks about the utter lack of medical care, and the unfortunate swindling of travellers that require it. From the start of the journey itself, there is no concern of wellbeing of the yatris, with moving from Nepalgunj (490 ft) to Taklakot (13,025 ft) in a single day leaving no adequate time for acclimatisation. This causes many pilgrims to fall sick, showing symptoms of AMS in the first couple of days itself. Further, “in case of acute medical emergency, a helicopter has to be requisitioned from Kathmandu costing Rs 1.5 lakhs extra.”, Maj. Gen. Suman writes.

Often, tour operators have prior knowledge of landslides and other such happenings, yet the pilgrims are made to travel, only for them to have to be airlifted for an extra charge of Rs. 15,000 per passenger. There is also a lack of contingency plans in case of bad weather or other conditions. In fact, many operators use these to their benefit. “In case pilgrims get stranded due to bad weather, no arrangements are made for their stay. They have to pay huge extra costs for substandard accommodation. It is a well-organised scam. The loot is shared by the tour operators and the hoteliers.”, he adds.

The air transportation in the region is rather haphazard, with no safety norms or precautions taken. Pilots of helicopters and small aircrafts are often on duty for more than 10 hours in a day, flying at high altitudes, due to overcrowding.

More recently, the instances narrated by the Maj. General were unfortunately echoed by a couple from Delhi. Mr. & Mrs. Singh made what was to be a sacred journey of a lifetime; in the 2017 Kailash-Mansarovar yatra season. While the religious aspect of the experience was very fulfilling; the rest was quite the contrary. The couple booked their expedition through a well-reputed travel company, but their trip was handled by a smaller private operator based out of Mumbai. There were no medical check-ups conducted by any of the tour operators. “We were just told by the operator to send a normal medical certificate from a local doctor. Probably to process the visa, but that wasn’t told to us.”, they told me. “Neither were there any medical check-ups at points in Nepal or China.”, Mr. Singh added. The couple told me that the lack of oxygen due to the altitude was the main concern during the yatra, saying that the trek is quite stressful and only a 100% fit person should take it up.

At the end of the day, the yatra is also a form of travel and tourism, so the accommodation of guests should be one of the primary focuses. However, this is not the case. “The lodging is substandard, but the biggest issue for us was the sanitation. There are restrooms, but only for namesake. They couldn’t be used by anyone due to their filthy state. We were forced to excrete in the open, in absolutely unhygienic conditions. Not to mention in almost zero-degree temperatures. You just have to manage yourself in whatever way you can.” Mr. and Mrs. Singh said to me. While roughing it out is expected from a trek or camping, there is no excuse for subpar hygiene. Especially when more than 50% of the travellers are above 60 years of age. Mr. Singh reported, “Some of them were even 70 years old. To add to that, some of the yatris were overweight too.” Yet, neither the government officials, nor the tour operators think that proper medical tests were necessary to be conducted. A truly “enter at your own risk” attitude.

The Singhs had to go through a terrible experience when a 75-year-old man in their group passed away. The entire group was forced back to the base after half of the Kailash parikrama. Mr. Singh told me that he thought it was better than they returned, as the next half was at a higher altitude, thus more dangerous. He said this because of the kind of safety precautions on the yatra from the operator’s side. The leader had a basic first-aid kit and one oxygen cylinder, which Mr. Singh told me he doesn’t believe would be of any considerable help during an emergency situation.

“It’s really a miracle if you make it back from the yatra, being above 60 years old and without a proper medical check-up.”

Either miracles are going around aplenty, or Lord Shiva’s blessing are truly showered on all his yatris when they visit his home; because a lot of the pilgrims are either over 60 years old, and most haven’t fulfilled the appropriate medical prerequisites. However, this cannot be an excuse for the lax behaviour of officials and operators alike, or their treatment towards pilgrims. Similarly, people shouldn’t have over-confident, reckless attitudes towards the yatra, as this can clearly lead to fatal consequences. A combination of the above factors has led to roughly 30 reported deaths on the Kailash-Mansarovar Yatra in the last 3 years.

The mountains aren’t a friendly place if you underestimate them. While the belief that nothing good comes easy especially holds true for a pilgrimage; the struggle shouldn’t mean that you put your life in danger.

Commercialism has pervaded through a consecrated journey, with devotees blinded by faith that is dangled in front of their eyes by tour operators who are blinded by profits, having completely disregarded the primary concern of human safety. While many people refuse to criticise a pilgrimage due to its sacred nature; it is important to call out its shortcomings so that thousands of lives are saved.