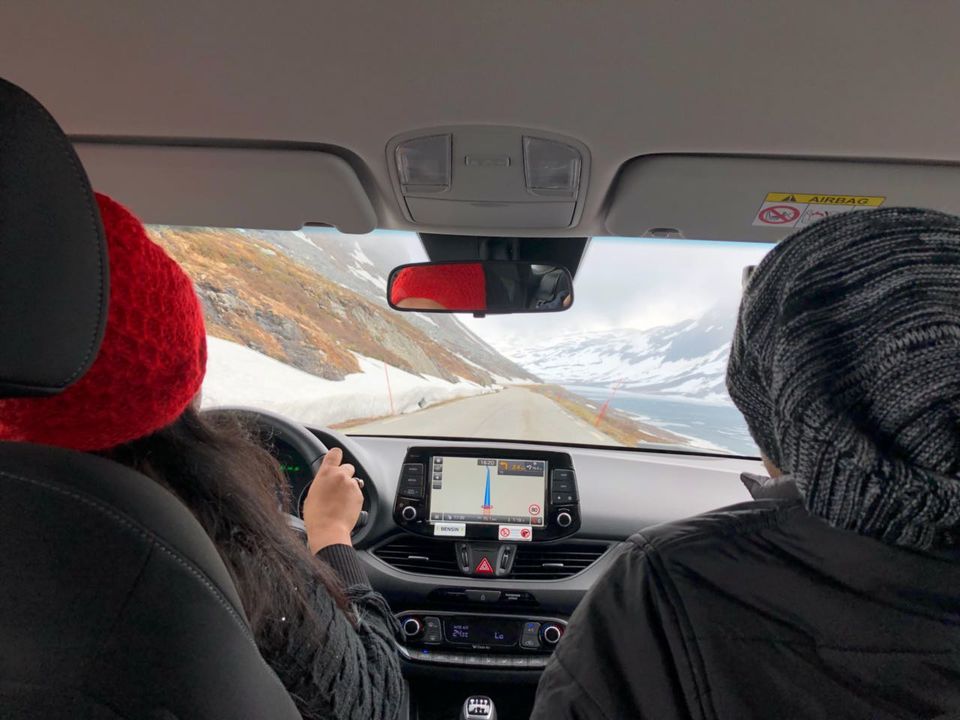 How do you react to female drivers in India ? You still have raised eyebrows and the age old saying " Ladkiya gari chala nahi sakti " or in Bengali " Meye ra gari chalate pare na " (Trying to maintain my roots).

Hi, This is Procheta and this is how I drove 2800 kms on Norwegian roads.

Have you ever faced a dilemma where easy is difficult? Yes, Norwegian roads are a driver's wet dream, but an Indian driver will face issues. We are just not accustomed to such high standards of road discipline.

We hit the road in Norway on 20th May 2018. A group of seven flew from New Delhi to the Nordic capital, Oslo. We hired a Toyota Avensis (automatic) and a Hyundai i30 (manual) from Hertz; to drive across southern and western Norway. For Lofoten Islands, we hired a Toyota Yaris and Volkswagen Polo, both automatic, from Avis at Tromso airport.

Norway has umpteen scenic routes, and our trail had a few of the major listed ones. We drove through Rondane, Atlantic Ocean Road, the Eagle Road, Sognefellsvegen, Lofoten. It was a landscape cocktail - highlands, valleys, fjords, mountain passes. And to then comes the man-made marvels - sea bridges, undersea tunnels and mountain tunnels to make commuting easy in a terrain so tough. If our drives were amazing, our stays were fabulous, but that story is for another day.

Well, as pretty as it may sound, driving in foreign lands is a task for your brain. What do you do when you have a straight road and zero traffic? You hit the pedal and drive straight through, right? Oh! That's a big NO in the Viking land. You stick to the limit. If it reads 30kmph, you drive at 30. And that my friend is where the problem lies. We Indians are so used to speeding and overtaking, that abiding by limits is a complex problem. Next comes honking. (How I wish honking was banned in India.) With next to zero traffic and all cars driving in a set pattern, honks were not required AT ALL. Thus, like a novice; I drove an average of 400 kms per day through the most scenic roads ever, at times touching the clouds, at times under the sea and at times through earth for 24.5kms straight (Laerdal Tunnel). It was tiring for both the body and mind, but I feel a sense of achievement and proving all those stereotyped minds wrong. Yes, I am an Indian, I am a woman and I can drive, be it India and be it anywhere across the world.

So, next time you go judging another female on the steering wheel, remember, there is nothing we are incapable of.

3. There are tons of road rules, like you just cannot overtake any car ahead of you. There are separate road markings for that. You have to stick to speed limits. They will pop up on GPS as well. Traffic circles (or roundabouts) are everywhere. Traffic in the circle or coming from the left has the right of way.

4. Do not break traffic rules. There are cameras everywhere and your fines will burn a hole in your pocket without you even knowing about it.(It's not India dear. You won't find police stopping you and handing you challans.)

5. The most important thing : When in doubt, do as the Norwegians do. Follow them religiously.