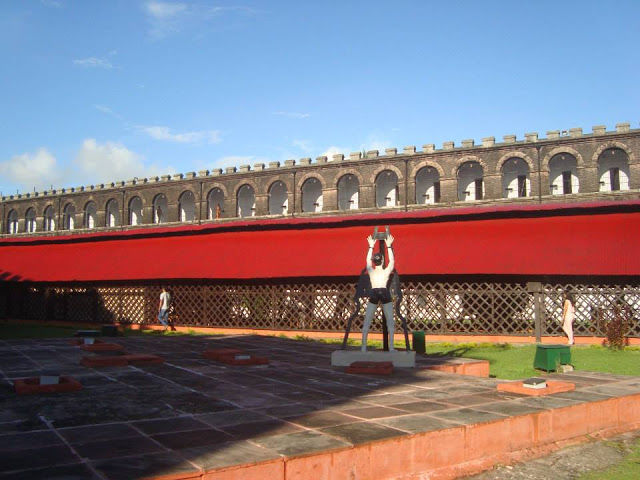 It is natural for any Indian to remember black water in the name of Andaman !! The child who reads the history of independence, the child knows the Andaman cellular jail, so after going here, it does not even want to get started in the mind of patriotism. When we were enjoying the natural scenes of sitting in the plane, there was a feeling in the mind that we were coming so far from the mainland where we are coming to the intersection, when there is water to the fighters of our independence struggle Would have been thrown into the ships and how they would have experienced in this lonely place. Many of them would be able to break in the path due to the batch in such a long sea, and whoever would have reached there somehow, there would have been a breakdown of the loneliness, weather, and British government atrocities so that they Life seems to be more painful than death. Andaman, or say, to start your journey in Port Blair, with a cellular prison, we had a lot of respect for the sons of our country. According to the pre-scheduled schedule, after the relaxation of the journey, after a short while, the work started today with the cellular prison, and concludes with the sound and light show that is taking place here at night and in the remaining time, the sea and Sagarika museum With the philosophy, the marine waves of Corbins Cove, the closest beach in Port Blair, have also been enjoyed. Let's start the journey in cellular jail. Stereotypely decorated with a picture of a fighter -

Sentenced to a prisoner in cellular jail jail

In what way the British changed the name of Andaman to the name of the water, there is a long story behind it. Those people made the minds of sending our sons of our country here, thinking that one of them was the loneliness and the weather hit Apart from this, the main reason for this was also that the passing of Samundar in Hinduism meant that your caste was abducted, so they were sent to send these people here. Better was sentenced. It was after the revolution of the eighteen hundred fifty years of revolution, though there was no jail here, but here the loneliness itself was a very big punishment. But when the British thought that these revolutionaries were still living their lives here and their numbers increased even then a prison was created to make the sentence of black water hardened. This giant cage made in the nineteen six hundred years after ten years !! The materials needed for its construction were brought from Myanmar. In the middle of this star shaped fish fish star fish fish was a long tower, so that all the activities of the captives were monitored and seven out of seven directions turned out. Each of its edges was three-storey and one wing had twenty-three chambers, meaning there were six hundred and ninety-three rooms in the whole jail. A small skylight was made for air traffic in every room. This cellular prison was named because of its size because it was constructed in such a way that it was not possible to talk in one cell from one closet and every wing was made in such a way that the wing of a wing was made On the other side is the main entrance of the second wing closet. Oh, then we could not even see each other with our own intention of talking away. It can also be estimated that one of the major revolutionaries of Veer Damodar Savarkar's elder brother, after many years, came to know that his younger brother has also come here. Every one of the rooms here comes with the smell of devotion. Savarkar ji's closet is very much saved! There a picture is taken on them. Going into this closet, it seems as if you have gone to a temple, suddenly the voice comes from the heart and bow down. Thanks to these people, today we are breathing in the open air. Only loneliness was not the punishment of these people !! These were used to cut trees in marshy land, and instead of oxen, they used to be used for oiling !! At the sound and light show, it was told that one man had to extract as much oil in a day as did not get out of oxen in our country. The work was not done until the completion of time. Food was also a compulsion if someone sat on a hunger strike was given food by putting hose. A revolutionary was forced to eat food due to forced food and he was martyred at the same time. Nothing has happened to these people for us !! Reading about slogans and punishments found there was so bad that the barbus eyes were scared !! If anyone had to be hanged, he would have been kept in the closet near the execution room. By listening to the painful sounds coming from there, his mind continued to suffer. He also came to know that once Savarkar ji had jumped into the sea after being disturbed by atrocities, but he was also caught from there. This place has also been given the status of National Memorial. Only three wings are safe from the seven wings of this historic building.

After about two hours, we had to go out and look at the rest of the place, during this time the taxi driver had taken the ticket for the light and sound show in Hindi from 5:30 pm, which is worth about fifty rupees per person. But every day from 5 pm to 6:30 pm in Hindi and six to forty-seven to seven forty-five, the sound and light show is used in English, which includes freedom struggle Sector is narrated immortal saga of fighters and