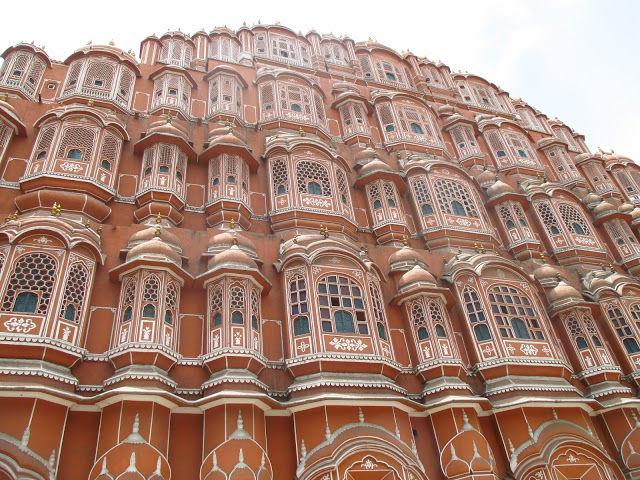 After Ammer, the next goal of our journey was to visit the Hawa Mahal after worshiping. In such a way, the driver said, eat in the Lakshmi dessert stores of old Jaipur and after that see the Hawa Mahal. Its name was heard from a lot of stroller friends, so we gave a resignation. The old Jaipur had just reached that the rat started to jump in the stomach as if it were just saying it was done and there was no waiting. When there was a hunger, there was no alternative but to stop, so we sat down looking at a fine clean restaurant nearby. We ordered Mango Shake for two special plate and daughter. The quality of the food was good. Three types of four types of vegetables and two non-one plate, Raita and rice separately from the top. The food was quickly disposed of in a hurry and the air turned like a palace. While coming up in the morning, a different old Jaipur was shown, there were different views at this time. Open open shops, clothes hanging in shops It seemed to me that the good means would have got the goods in cheap prices. But our goal was something else. We were quick to reach the air castle. Looking at the old Jaipur shops we reached the Hawa Mahal. In this five-storeyed pink building, there are nine hundred piercing windows. The royals from the royal family used to see the market rushing from these gates. There were also some fine webbings, which could be seen outside, but no one could see it inside. Queen Empress was not allowed to go out in the open because of the curtain practice. Sometimes there is a lot of trouble, thinking about them, maybe there is a situation like a bird in a sleeping cage. Everything will happen only to be nearby, there will be no wings to fly. Can not see anybody, can not go to the world, can not live by its own will. If some reason has to be removed from a particular place then it is very necessary to wear a long knee. But what is this, it was a prisoner's condition. Or say the prisoner's life will be a little better, he would have lived in this situation that sometimes his sentence would end, but his sentence would start with birth and end with death. However, what will be seen from these windows, as the open eyes appear under the open sky. Still it is Sawai Pratap Singh who made it. It was good to see a little bit from nothing. It is very attractive that this building, as shown in the photo, looked exactly like that. There are painted glasses surrounded by these windows which look good in seeing and a little air was coming, perhaps for this reason this is called Hawa Mahal.

We did not spend much time here and the wind went further through the back of the palace. Many shops have been built in the backyard. It was a little like a place like Chandni Chowk in Delhi. Thin lanes and lots of small shops. Now our intention was to rest straight from the railway station, but the driver said on the way Jantar Mantar is visible from the front. Now the time of the arrival of the train is going to be a little late and look at it when the gate is near Stand up then Even though we did not mind, we went off and wept in our mind that it was not so much heat, it was better if we were scared in the extravagance, we would have stayed one day. But at Jantar Mantar, our illusions got very well removed. In the afternoon, it may have been from one to one and a half times as soon as he started seeing two astro machines here, the heat started hugging him. Me and Sanwi sat in a place and they proceeded to see some of the instruments. Here I have not seen any thing in the manner and the thought of seeing a little too much has been aroused by the heat. Here two bottles of water bottle was spent and ran away from the Jaipur railway station. Here we have a taxi person carrying a restaurant near. He said that if you go away from here, then you will reach the shadows, if you go from the gate, you will have to put in line. Now we arrived in the sleeping air conditioned waiting room here. Only after seeing from the outside, the matter was understood. It was such that it was not moving on the right, instead of working with wings, the crowd was so much that there was no place to stand like that. Here's the real heat of Jaipur. Well, this time it was cut in some way and its Ranikhet Express got off. After the difficult experience here, sitting in his seat felt like we were sitting in a comfortable couch. We preferred the side upper and side lower seats when booking, so that they could sleep and sit accordingly. In a while we were all three in good sleep and by then the diner came. Two plate took the call. Manga took so much but now eat a lot of third grade food. When taking money, then it is called paneer's vegetable and wholesome and while giving pepper and pepper papad If there was a situation that did not die, now hunger would have been eroded, then somehow lowered it with some exhaustion. After eating after a while and chatting with Jaipur, I did not know when I came to sleep and in the morning I opened my eyes only in Haldwani.

Some excursions to travel-