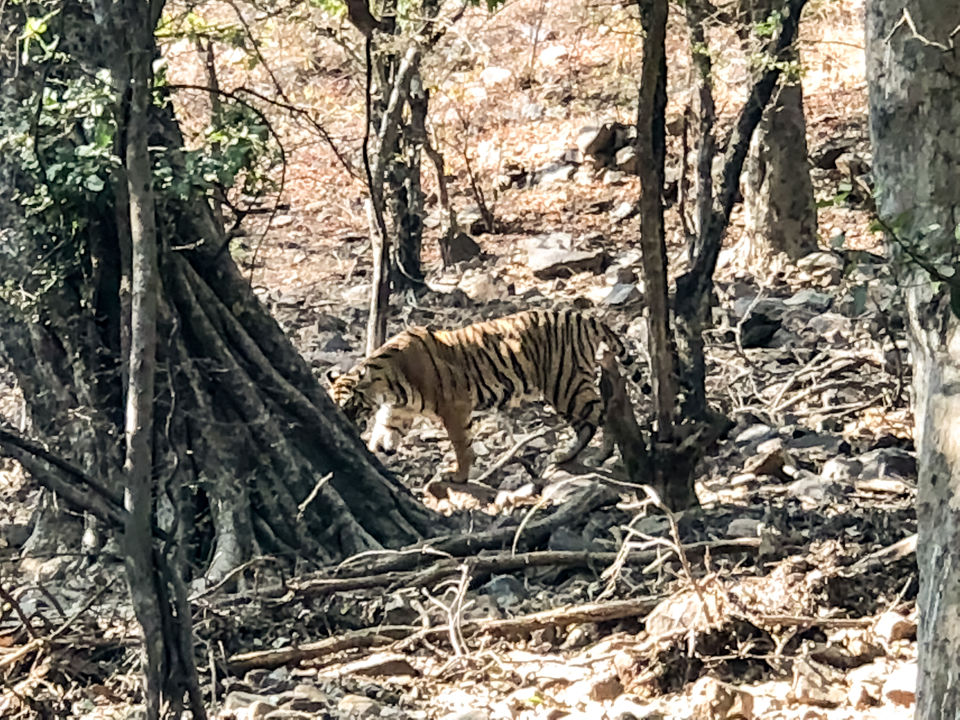 Situated in the Sawai Madhopur district of Rajasthan, Ranthambore National Park is one of the largest wildlife national park (~500 sq kms area) of India known specially for tiger conservation. It's one of the main tourism destination in Rajasthan attracting lacs of wildlife enthusiasts every year.

The best time to visit Ranthambore is in the months of November to March when the weather is cold and pleasant. April to June are the hotter months and I suggest to avoid them.

The national park is closed in the monsoons - 1st July to 30th September.

By flight: The closest airport is Sanganer International Airport in Jaipur which is ~180 Kms from Ranthambore. One can get to the airport and get easily a cab or bus.

By Train: There is no railway line in Ranthambore. The nearest railway station is Sawai Madhopur from where one can get a cab or board a public transport bus to Ranthambore.

By Road: Ranthambore is very well linked with all the major cities (Jaipur, Delhi, Ahmedabad, Ajmer, and Jodhpur) and towns through state cab service and it can be reached by cab or private vehicle easily.

Every day, there are two slots for Safari. Every slot spans for 3.5 hours. The morning/first slot is from ~7 to 10:30 while the afternoon slot is from 2-5:30. I suggest to go for morning slot as the safari experience is more enjoyable in the morning breeze and mild sunlight as opposed to the hard sun and sand in the afternoon slot.

There are two mediums of booking:

This was very very confusing for me as I could not find exactly where to pre-book my seats for Jungle Safari. Like most other people, when you google for online booking for Jungle Safari, the first link you probably get is : https://www.ranthamborenationalpark.com/query.html

I also booked through this but received no mail or confirmation. And had to face trouble when we reached at the booking counter.

The actual link for the booking is:

This requires SSO login (Rajasthan Single Sign-On) which is done by registering on https://sso.rajasthan.gov.in

The park is divided in total 10 zones from Zone 1 to Zone 10. Zone 1 to Zone 5 are considered good zones with the higher probability of sighting the tiger while Zone 5-10 are located in the outer part as buffer zones.

There are lots of small lakes and water bodies where one can see lots of crocodiles chilling out around the water.

Gypsy has a few more advantages over the canter:

- Gypsy being smaller, is easier to manoeuvre than canter during safari and can also access narrow trails and difficult terrains which otherwise are not possible with bulky canter.

- In canter, since you are traveling with 20 other people, you don't have much control over canter while in case of Gypsy, you are the one to decide where to stop and when to move.

While most of the other national parks of India and outside are covered with evergreen forests, the Ranthambore National Park is formed of dry deciduous forest. 85% of the forest is consists 'Dhok Tree' with small leaves which are shed off in the winters, thus providing better visibility of tigers and other wildlife.

Deers are very common and have good population. Two types of deers can be found here:

Antlers: These type change their horn every year

Spotted dear & Sambhar deer are ones from the antler category

Antelopes: They do have their horns permanently

In Ranthambore National Park, no animal/tiger is traced with GPS device or any technology. They are spotted with experience like footprint following etc.

Interesting Facts about Tigers and Lions

Lions stay in group and the group is led by the female while male are lazy ones and fed by lioness only.

Whereas, tigers (male as well as female) remain alone in its own territory and are totally independent. There are only two exceptional cases, one is mating in which tiger and tigress can be seen together and other after a tigress gives birth to cubs.

Tigress take care of her cubs for around a year and then after she kicks them off to make them choose their own territory. Sometimes, when tiger cub is stronger than mother, he/she throws off his/her mother out of the territory too.

Tigers mark their territory by spraying off their urine or marking with their jaws. They frequently walk in their region from end-to-end for the confirmation of the security of their territory.

We were a group 5 people. We reached Ranthambore at 6 in the morning. We navigated to the tiger reserve directly so we reached the national park entry gate which was closed so we decided to wait for it to open but after a while, after we asked a couple of people over there, we got to know, first we have to go to the booking counter which was 5 Kms in the other direction. So we rushed to the booking counter.

On reaching there, we tried to get a booking in zone 1-5 but it was not available in the morning slot. So we decided to go for the 2nd shift (the afternoon slot).

Till then, we went to Ranthambore fort, Ganesh Temple and Rajiv Gandhi Museum. In the second slot, we got zone 4 which has a few water bodies and lots of deers.

While, it's literally very rare to spot a tiger and sometimes people are unsuccessful to spot a tiger even after taking 4-5 safaris, but to our luck, we got to spot the tiger T-84 (Arrowhead) and move with it for almost 20 minutes

Treepie are the birds which clean tiger teeth. These birds are in general very playful and brave(That's ovbious no! :P). Following are couple of picture of my mom and dad playing with the treepies.

This time, I did not carry my camera so the pictures are only taken from my phone which are not as good but soon I will visit again to get some good pictures for you.

Other Places to visit in Ranthambore

Apart from wildlife safari, one can plan to go to the majestic Ranthambore Fort. It is ~1100 years old historical fort with massive walls and a has a pretty good view from the top. This is located 5 Kms from the wildlife reserve entry gate.

Trinetra or Three-eyed Ganesha temple is one of the oldest temples in Rajasthan. It was built by King Hammer of Ranthammbore

This is an amazing place for wildlife enthusiast and photographers. You should definitely visit if you are atleast one of the two.

Visit in months of November - February if possible.

Try to book the safari online in advance.

Get a gypsy rather than canter if you are in group of ~6.

Don't forget about zone! Get a booking in one of the main zones 1-5. It's highly unlikely to spot a tiger in buffer zones (6-10).

Finally, Not everything can be experienced reading this blog. You pack your bags and get the on-ground experience. I am pretty sure, you will learn a lot!

SPONSORED
Want to book a similar trip?
I accept the Terms of Use and Privacy Policy of Tripoto.
SPONSORED
Related to this article
Things to Do in Guide,Guide Travel Guide,Weekend Getaways from Guide,Places to Visit in Guide,Places to Stay in Guide,
Tagged:
#wildlife#tiger#safari#ranthambore#deer#travel#guide#wildlife#wildlife