With Only 16 Inhabitants Left, This Beautiful Italian Town Is Also A Dying One. #visitagain 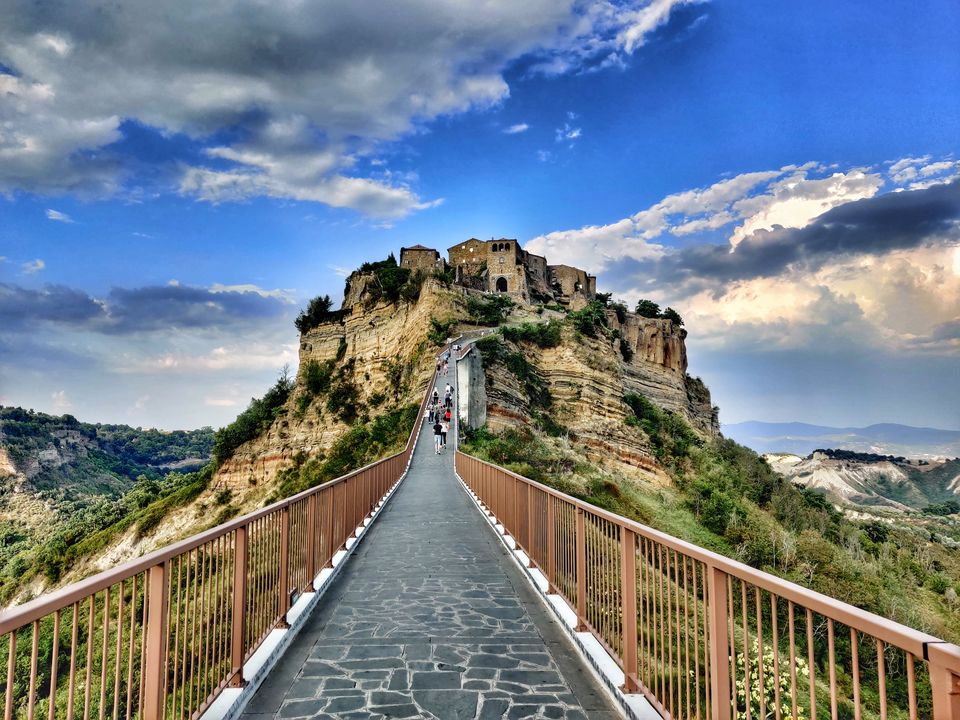 The phrase above describes the Dying city in more poetic way, how it connects it to the other world and even after being in the land that is as destroyed as it can be, this beautiful city stand still.

Civita di bagnoregio is by far one of my favorite places i have been for a day trip from Rome and you will see why.

We started our day early by catching a train from Roma Tiburtina to Orvieto. From there you have to catch a cotral bus for the town(takes about 40 min).

As this place is a bit on the edge its a bit difficult to reach even though it's quiet near public transports are not that frequent.

We reached Bagnoregio at 9am. We have to walk through the small city to reach the bridge of Civita Di Bagnoregio. There is a small entry fees at the start of the bridge for the city visit.

There is only one way to reach the town and that's the bridge (ponte per civita), this new bridge was constructed in 1965 as the stone bridge was damaged due to the landslides that occurred frequently.

For entering the town you will have to bypass a grand doorway (S.T Maria Doorway).From here you can see the panoramic view of the valleys and mountains surrounding the town.

Once inside you will have to take a moment to immerse yourself in the beauty of this place with colourful flowers all around the pale brown stone houses.

It's a very small place , maybe about a kilometer stretch but every step will be worth visiting.

While walking we came across a square filled with tourists and cafes facing a beautiful Romanesque Church of San Donato which was restored back in 16th century.

You will surely not run out of this place because there's so much to see. We then went to a museum (Antica civitas).it is said that when St. Francis of Assisi stayed in Civita Di Bagnoregio, he cured a young boy from death. His mother promised to the Saint that once the boy would grow up, he would become a server of God. That is how the boy became Friar Bonaventure of Bagnoregio.

This place was used to make pressed olive oil during that time and still the olive oil from here is considered as one of the most delicious one in Italy. The above image shows where it was made. Donkeys were used to mash the olives and then a metal press was used to press out the olive oil.

One more thing that is famous here is the Ricotta gelato, weird right? Even i was a little sceptical about trying this out . It's basically fresh ricotta with flavour of choice on it. I chose the basic one that's chocolate just to be safe and i really liked it . It's not for everyone though but i would definitely recommend it.

Civita is located on a hill which is surrounded by Valley of Badlands. The destruction of this region was started frequent landslides and Erosion. Due to the clay and tuff it has become weak and in centuries It made people leave the place and now there are only 16 inhabitants remaining. CAN YOU BELIEVE THAT???

This is the reason why it is called as "The Dying City' or "The City That Dies".

If you want to take public transport then you have leave before 4pm or so.(please check the CORTAL bus time table). we wanted to wait for the sunset and therefore took a taxi back to orvieto station.

I would love to visit this place again in winter when the clouds and fog will make the place look magical.

taxi from civito to orvieto station- 45 euros for 2 people)