On hindsight we realized that we committed a traveller's travesty while visiting Angkor Wat. It had been a bucket list destination for us for a long time. We travelled around 5000 kms to be there in Siem Reap, Cambodia.

Angkor Wat, built as a Hindu temple in the early 12th century by Suryavarman II, was dedicated to Lord Vishnu and originally perhaps called Vrah Vishnulok, depicted Mount Meru, the ancient abode of the Hindu Deities. Statues of Vishnu, the preserver (unfortunately beheaded by art thieves in 1980s), 2000 apsaras sculpted on the temple walls (said to be have been born out of the froth during the churning of the ocean of milk, samundar manthan), bas reliefs on different walls (a total of 1200 square meters) illustrating stories amongst others from the Ramayana, Mahabharata, Samudra Manthan and Reign of Suryavarman II. Angkor Wat was completed by a later king, Jayavarman VII and turned into a Buddhist Temple.

A Middle Ages architectural and astronomical wonder with overwhelming finesse and detailing, lost to the world, conjectured that this happened because of long droughts (1362-1392 and 1415-1440) and Thai invasions in 1431. Though visited in 1586 by Antonio da Magdalena (a Portugese friar), when actually rediscovered in 1860 after the visit of French naturalist, Henri Mouhot, it was still run over by forests. It became a tourist destination in the 1990s, though only 6750 people visited it in 1993 as compared to over 2.5 million now.

To be there at sunset when the day's last rays of the sun fall on the temple and bathes it with golden light is a magical experience.

And our travesty. So called offbeat travellers, history buffs, architecture aficionados, students of Hindu mythology, photography freaks, bloggers and what you have - we spent all of two hours here, scurrying through the corridors and premises!

The monument which took over 30 years to build over the reigns of 2 kings, by 300,000 workers, with 4 million tonnes of stone brought from 45 kms away, in the 12th century. Still supposed to be the biggest Hindu temple ever built worldwide.

We couldn't even soak in the aura of the place properly, let alone go over the complete complex and appreciate the ancient wonder in its entirety. Notwithstanding the fact that coming from India, we were completely over-awed by the idea of Hinduism having spread and been patronized by Kings in far away countries 800 years back.

We would recommend taking out at least one full day for Angkor Wat alone and two to three days for all. We spent a total of only six hours at the three complexes of Ta Prohm, Bayon and Angkor Wat, dedicating two hours to each, including the short travel times in-between plus pit stops at the Terrace of Elephants and the South Gate of Angkor Thom which had statues of the asuras (demons), devas (deities) and the Naga serpent god - Vasuki, said to be a three dimensional depiction of the Churning of the Ocean Milk (Samundra Manthan).

Do read up the history before visiting Angkor Wat, it will only enrich your experience when you visit the temples rather than diluting it. Otherwise the information overload (by the guide you must definitely engage) is overwhelming and difficult to process on the spot.

We will hopefully return someday. Meanwhile we share some pictures below.

An evening performance with an apsara dance, skits from the Khmer Ramayana (Reamker), a costume drama between a sura and deva, and traditional Khmer dinner was certainly a befitting end to a day well spent at Siem Reap, as history seemed to be recreated. 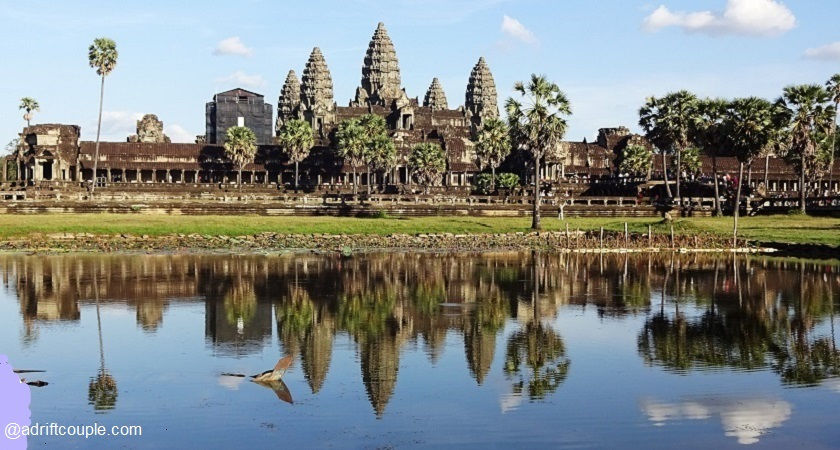 A fascinating pillared corridor, with aesthetic friezes, inside the Angkor Temple. The influence is from the Dravidian (South Indian) style of temple architecture. 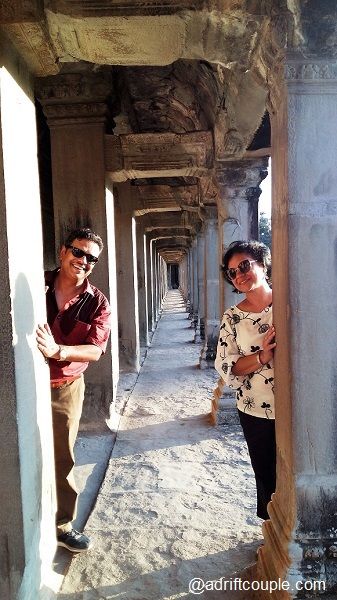 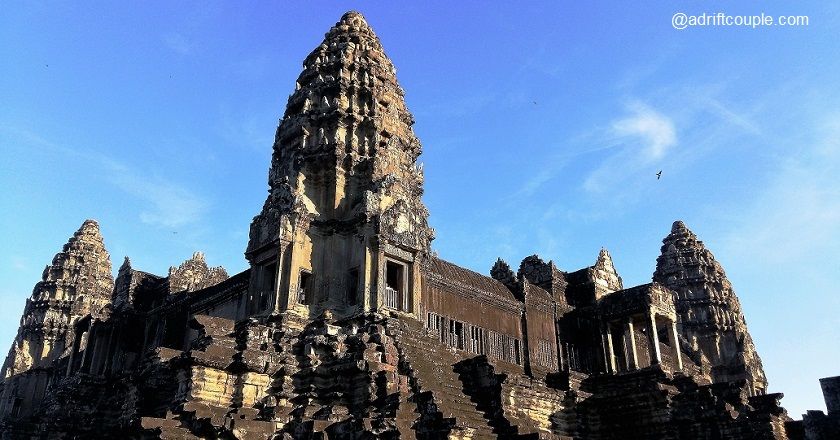 Apsaras – Many of the walls feature graceful images of apsaras, the celestial dancers. The pillars and walls at Angkor Wat have about 2000 apsara images as decorative motifs in various poses and mudras (stylized hand movements in Hindu religious dancing).

These graceful celestial dancers line the walls of the interior gallery of Angkor Wat. 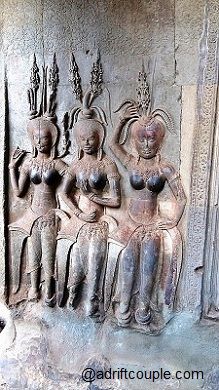 The Apsaras were created by the Churning of the Ocean of Milk. 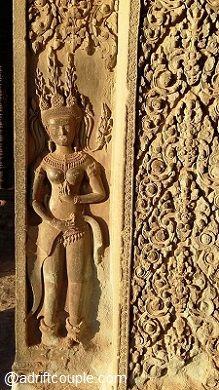 Three panels feature the judgment of mankind by Yama (God of Death) representing Heaven and Hell. Indulgence and enjoyment in opulent comfort can be observed in two tiers (Earthly and Heavenly) whereas Hell at the bottom exhibits acts of punishment and suffering.

Three panels feature the judgment of mankind by Yama (God of Death) representing Heaven and Hell. 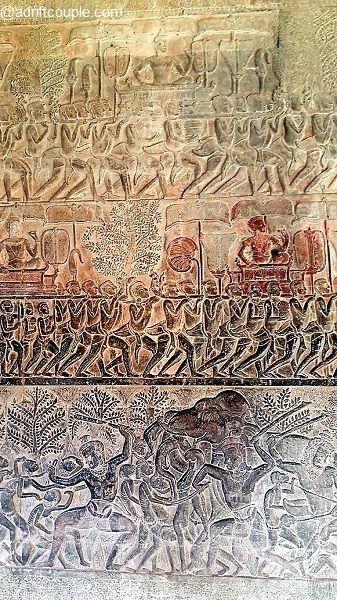 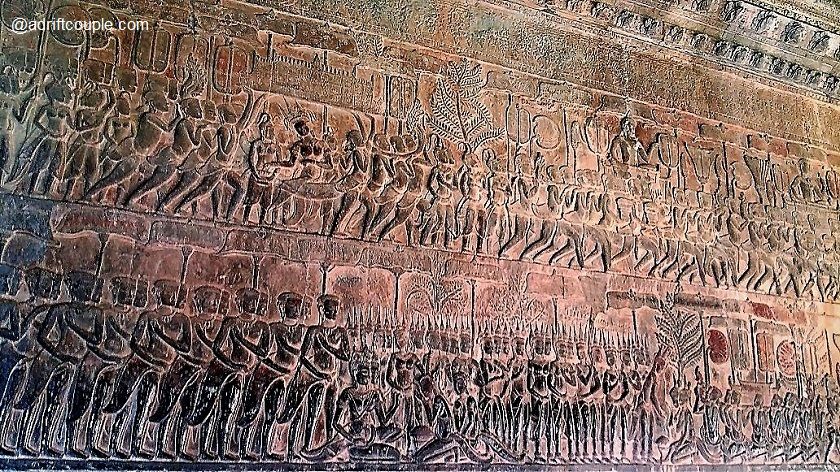 West Gallery – Battle of Kurukshetra from the Hindu epic Mahabharata

This is said to be one of longest bas-relief in the world. Extending for over 160 feet, it depicts the battle between the Kauravas and the Pandavas.

The Pandava Prince, Arjuna, in the midst of battle, on his chariot with his Gandiva bow and quiver with an inexhaustible number of arrows, given to him by Agni, God of Fire. 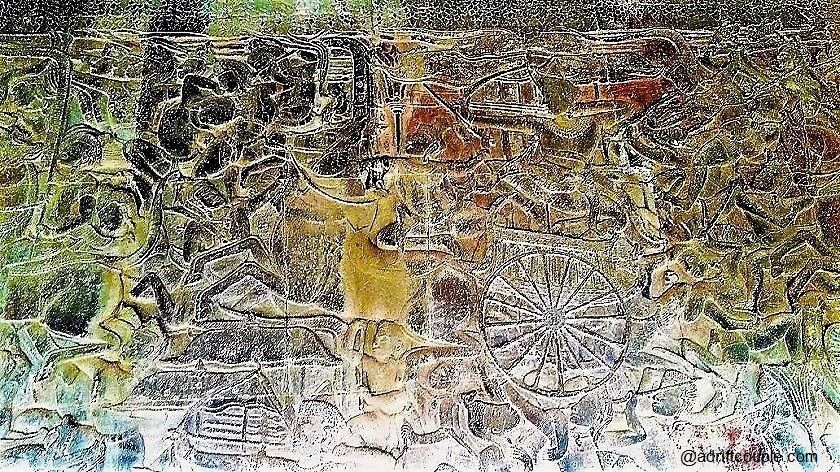 Lord Krishna is his charioteer and guide who counseled Arjuna when he was filled with moral dilemma and despair about the violence and death the war with his cousins and relatives would cause. This narrative and dialogue between the two is known as the Bhagavad Gita and is a revered Hindu spiritual philosophical treatise.

West Gallery – The story of the Hindu epic Ramayana

It is among the finest of the bas-reliefs at Angkor Wat.

Bhishma, the commander of the Kauravas army, respected by all, on his deathbed of arrows. 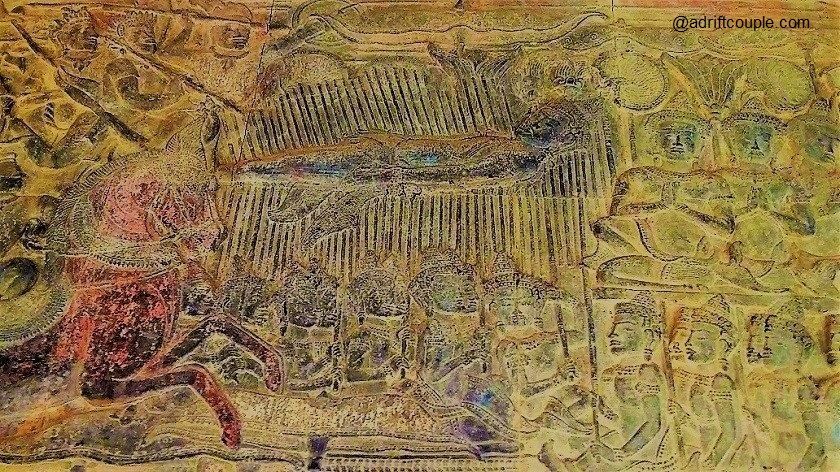 Lord Rama with his brother, Prince Lakshmana and the Monkey-God, Hanuman. 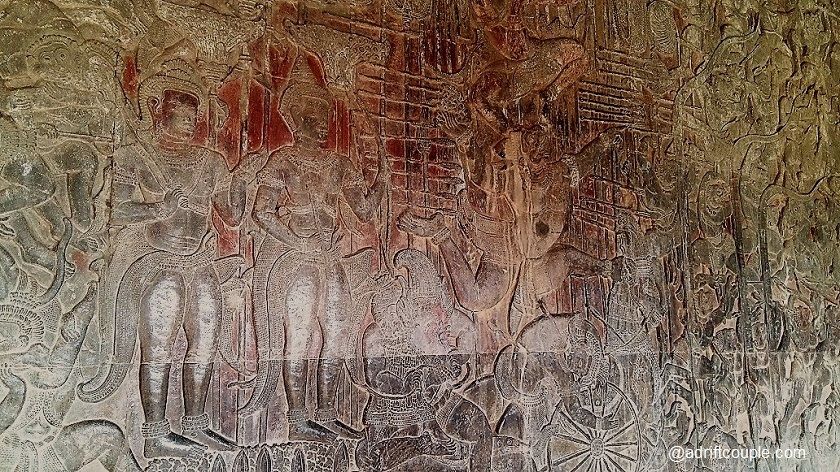 Ravana, king of the demons, with his ten heads and multiple arms in battle with Lord Rama’s army. Notice that all of Ravana’s heads are not side by side, as in the original Ramayana. 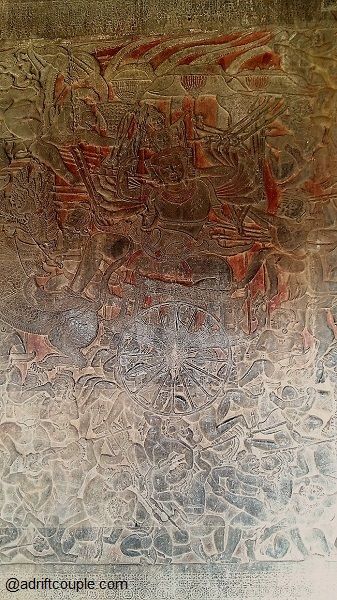 The reliefs sculpted on the western section of this southern gallery commemorate a series of historical events from the reign of King Suryavarman II, the founder of Angkor Vat, in the 12th Century. As the brief inscription engraved next to the image of King Suryavarman II, identifies this king by his posthumous name, Paramavishnuloka, the reliefs themselves have thought to have been sculpted shortly after his death.

The scene above portrays a splendid triumphal procession from a battle between the Khmers and their enemies. The central figure here is of King Suryavarman II. This relief also shows rows of soldiers who engaged mainly in hand-to-hand combat. 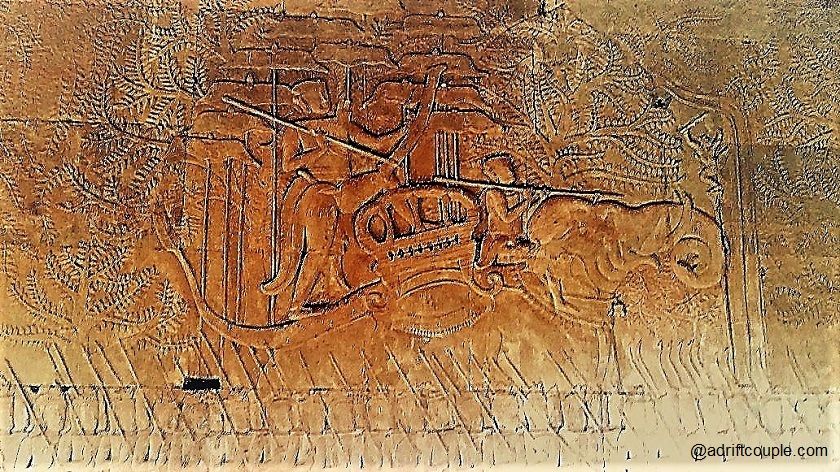 King Suryavarman II sitting cross-legged on an elevated throne and holding court while attendants are fanning him. Royal umbrellas can also be seen in the relief. 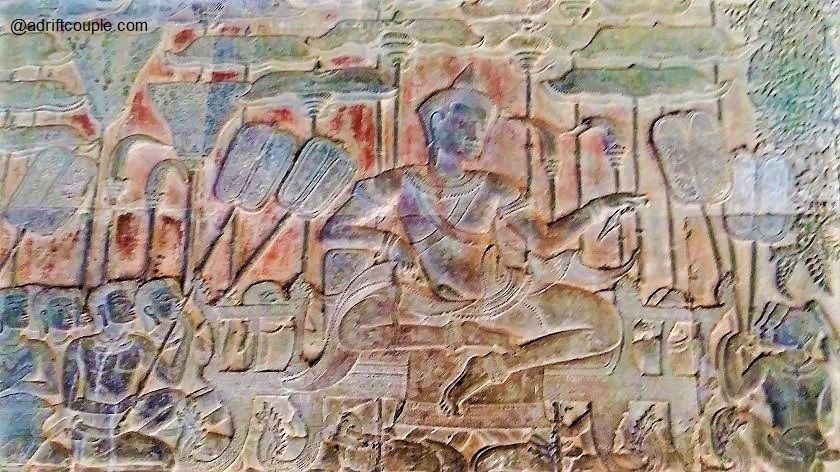 East Gallery – Churning Of The Ocean Of Milk, Samudara Manthan

This is the most famous panel of bas-reliefs at Angkor Wat and is inspired from the Indian epic, Bhagavata-Purana. The Ocean of Milk is churned by deities and demons to generate Amruta, the elixir of life and nectar of immortality. 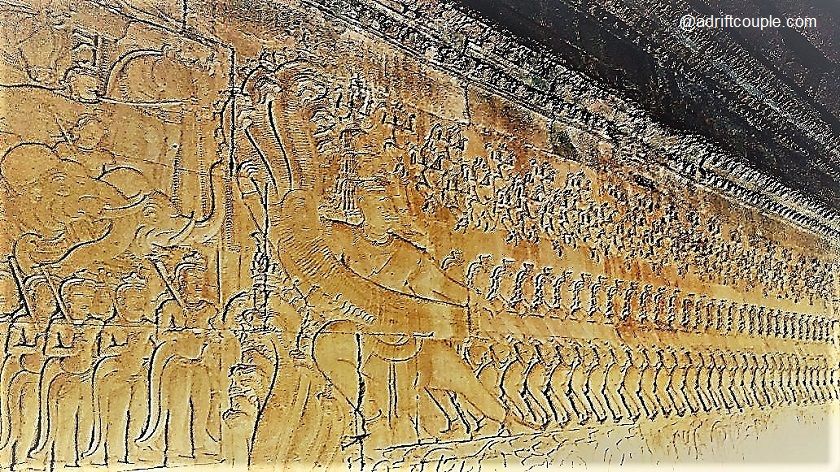 Vishnu, in his reincarnation as the Kurma turtle, offers the back of his shell as a base for the mountain Mandara, which serves as the churning rod. He is assisted by the Monkey-God, Hanuman. 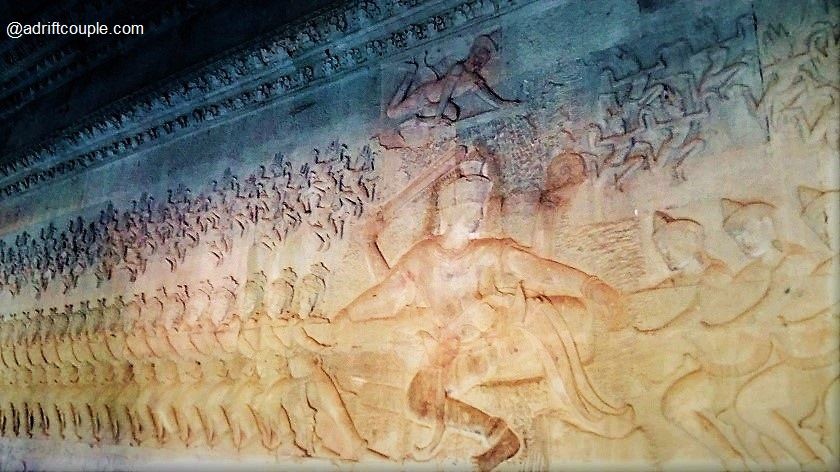 A huge cord in the form of the body of the Naga God, serpent Vasuki acts as the churning rope to churn the sea.

Here we experienced traditional Khmer culture through its classical dance and orchestral music. A befitting end to a mesmerizing day.

Apsaras Ballet - The Apsaras, half-women half-goddesses, are heavenly dancers. This ballet was performed at ceremonies and palace celebrations in the Angkorian era. Their circular movements and poised motions, the litheness of their gestures, symbolise their hovering between the cosmos and Earth. 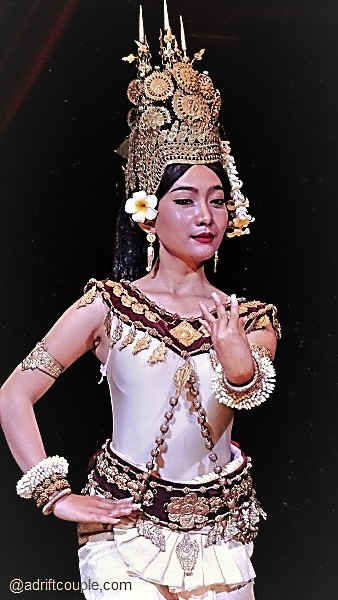 The Reamker (or Khmer Ramayana)

The Reamker is the Khmer version of the Ramayana, a Sanskrit epic from ancient India. The epic tells the life of Preah Ream (Lord Rama), his exile from the throne, the abduction of his wife Neang Seda (Sita) by the demon Ream (Ravana), the ensuing triumphant war along with his brother Preah Lak (Lakshmana) and Hanuman – the white monkey who is the son of the God of the Wind (Pawan Putra).

Rama and his younger brother, Lakshmana. 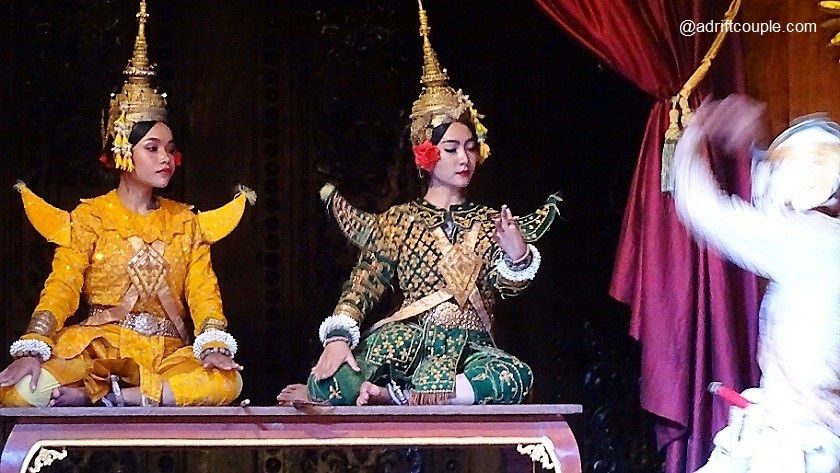 Rama, Lakshmana and the monkey warriors battling Ravana’s army in The Reamker - Khmer version of the Ramayana 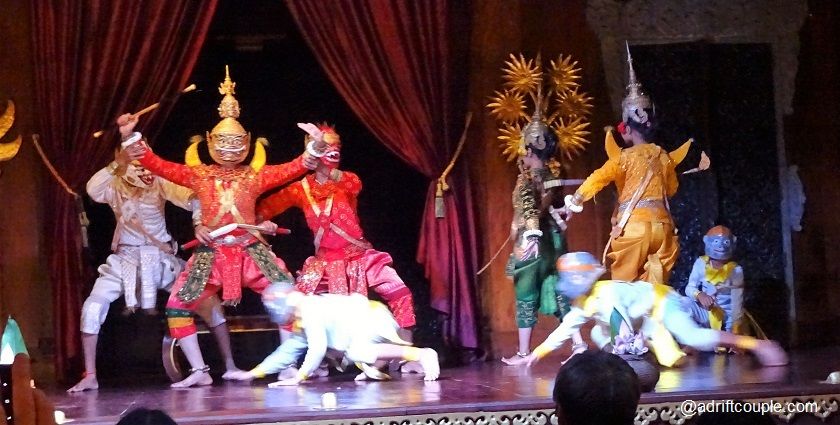 Mekhala Dance - A metaphor for the victory of good over evil. Armed with a crystal ball, casting rays of lightning, the goddess of water, Moni Mekhala triumphs over the daemon Ream Eyasur, whose axe creates thunder. The two characters illustrate the victory of beneficial rains over the dry and stormy season.

Moni Mekhala, the goddess of water. This characters illustrate the victory of beneficial rains over the dry and stormy season. 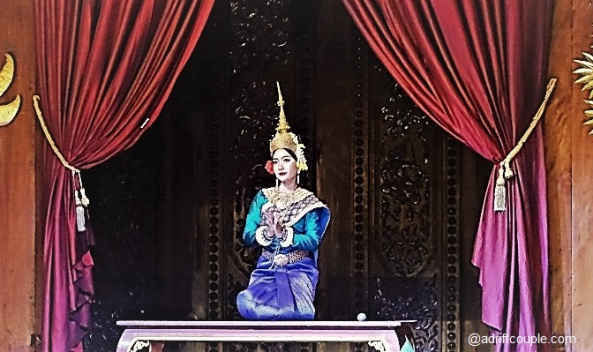 Daemon Ream Eyasur, whose axe creates thunder. This characters illustrate the victory of beneficial rains over the dry and stormy season. 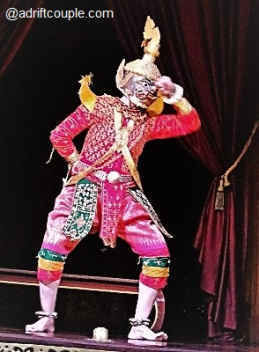 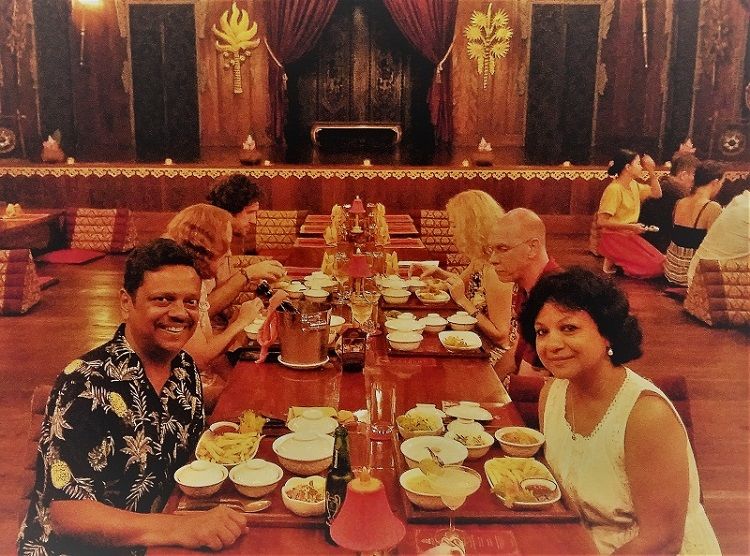 Pictures and descriptions can not explain the spellbinding enchantment and intrigue of Angkor Wat and the other temples. Everyone experiences it differently and returns with his or her unique intimate memories and impressions.