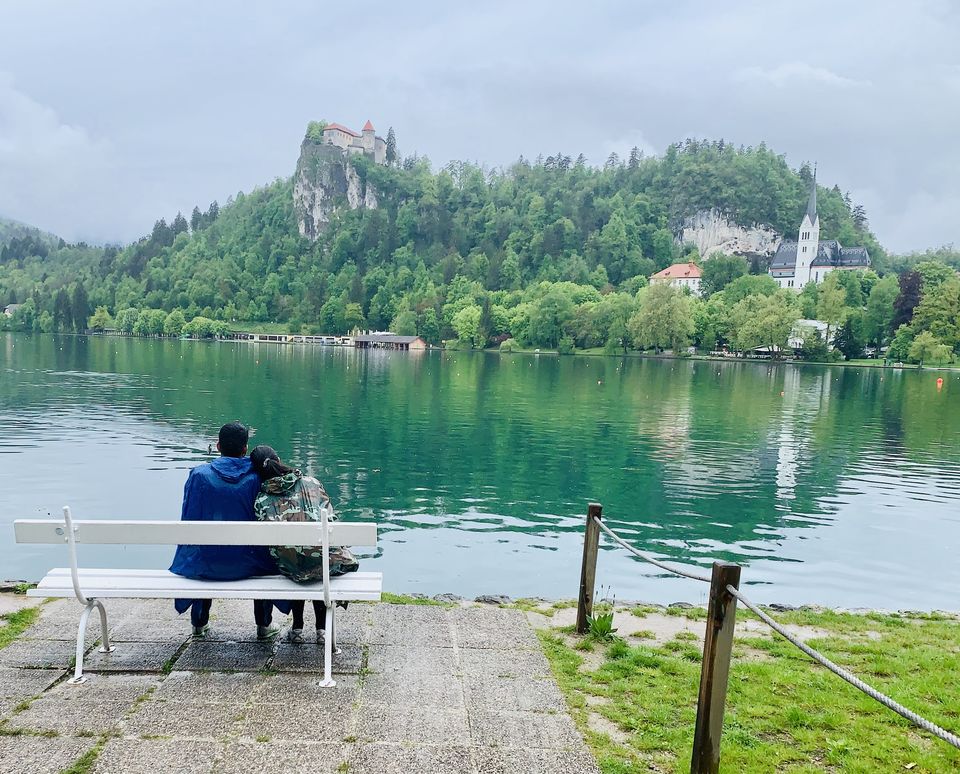 In search of a hidden castle in the mountains and a fairy-tale valley, we landed in Ljubljana, (Pron.: lu-bya-nah) the capital city of Slovenia. Slovenia is a small country located in Eastern Europe bordered by Croatia, Hungary, Austria and Italy. Unlike its neighbouring countries, Slovenia is much less explored by tourists and much more by nature. It has seas & gardens, lakes & mountains, hills & rivers, the country will definitely leave you wanting more!

We checked into our hotel, The Hotel Mrak, which is located just 350 mts. from the Ljubjanica River and immediately decided to explore the city, by foot, as suggested by our hotel manager. The weather was breezy and sunny, just the perfect one to be strolling around a beautiful valley along the river, surrounded by the ice capped Julian Alps.

While exploring the streets & beautiful green parks, we found ourselves at one of the central squares of the city, The Congress Square. The square also has a very symbolic role in modern Slovenian history. In 1918, independence from Austrian-Hungarian rule and the establishment of the State of Slovenes, Croats and Serbs was proclaimed during a mass demonstration on this square. In 1945, the Yugoslav Communist leader Josip Broz Tito first visited Slovenia after World War II and held a speech on the balcony of the University of Ljubljana, which faces the square.

Moving on, we reached the Triple Bridge over the Ljubjanica River. The city is most known for its many bridges. Fortunately, the names make it easier to remember each one. The Triple Bridge, as the name suggests is a group of 3 bridges which connect the city's historical, medieval part to its modern part. Towards its northern end, is city's another great structure, The Franciscan Church, a pink hued building that stands gloriously in a small, but vibrant courtyard called Preseren Square. This square is always buzzing with street artists, musicians, local sellers & much more. A quick coffee at the café right along the river is a must here!

The next & most interesting bridge we saw was The Dragon Bridge. Of course our interest was piqued (BIG Game of Thrones fans!) Legend has it that, Jason, the founder of the city & a Greek hero was attacked by a Dragon monster, whom he valiantly fought & killed. From its initial portrayal as a monster, the dragon gradually transformed into a symbolic protector of the city, embodying power, courage and wisdom.

Fun fact: Slovenia actually has caves in today’s time, which are home to a unique species resembling of baby dragons! Don’t believe me? Look up “Olms” in Postojna Caves, Slovenia.

With such an intriguing history and legends, a castle on the hill wasn’t far behind. The Ljubljana Castle is the key landmark of the city which was constructed between 11 -12th century. A glass funicular ride from Krek Square took us up to the castle. The main attractions inside include a museum exhibition about the Slovenian heritage, A Puppet Museum, A Prison, The Chapel of St. George, The View tower and a video presentation room called Virtual Castle. Audio guides in various languages are easily available for independent exploration around the castle. (EUR 15/Adult)

We entered the castle and walked right into a large courtyard watched over the Pipers’ Tower followed by the viewing tower. In the embrace of the walls and towers, the courtyard was built to gathering the army of the nobility and was also used as a walking space for prisoners where they performed their daily tasks.

We, then ascended to the view tower via a double spiraled metal staircase. After some 100 odd steps, we were breathless not by the hike but by the view! It was the most picturesque moment of our entire day. We could see the entire city, the river, the nearby mountains and even the not so distant Julian Alps. Post exhausting almost 50% of our phone & camera batteries, we stepped down to The Chapel of St. George. As the name suggests, it is dedicated to St. George, the patron saint of the city.

We ended our evening under the dazzling lights of the city with a glass of wine and an Italian meal at a beautiful restaurant right by the river followed by the most famous Slovenian dessert, Cream Cake.

Amid lightening, thunder & rain, we felt like warriors of the storm making our way through the dense forests and mountains to find our castle. Finally, after a hour long ride from the city, we reached Lake Bled, our fairy tale destination! The dark storm actually added to its beauty & made it look like a mystical valley hidden by the clouds in the mountains!

It is indeed a magical valley, not only according to all tourists who visit it each year but according to a local legend as well! Lake Bled is believed to be created by fairies. Once upon a time the fairies, who loved to dance on the luscious green grass in the the area, requested the local shepherds who fed their sheep the same grass to build a fence around their dance floor. The shepherds disagreed and soon their sheep ate all the grass and left bare earth behind. Seeking revenge, the fairies flooded the valley and created a lake with a small island in the middle, where they could continue to dance at night.

Yes, it’s every bit of the fairy land as in the story! The bluish – green lake waters surrounded by Julian Alps make it one of the most beautiful lakes in the world.

The Lake surrounds the Bled Island, the only natural island in Slovenia. Just under an acre in size, it now houses several buildings, including a 17-century church dedicated to the Assumption of Mary. The best way to visit the island is by small wooden rowing boat known as Pletna Boat.

After reaching the island, one needs to climb a beautiful Baroque staircase that has 99 stone steps leading to the Church at top of the island. Slovenian newlyweds often visit the island as it is traditionally considered good luck for the groom to carry his bride up the stairs on their wedding day.

The church and the separate bell tower that stand on the highest point of the island are not the only buildings on the island. They are accompanied by other historic buildings, including the Provost’s House and Potičnica.

The church has a legendary wishing bell which is believed to grant you your wishes if it is ringed thrice with a long rope hanging from the ceiling just above the glass altar. Well our wish was granted sooner than expected and it stopped raining! The storm cleared out & the clouds moved away, revealing the beautiful mountains and the hidden castle in its full glory!

The Bled Castle is a medieval castle built in 1004 and is the oldest castle in Slovenia (it’s 1000 years old!). We came back from the Bled island & quickly ascended towards the castle.

A rather short but steep trek takes you to the castle which overlooks the lake and offers spectacular views of the island, lake and the Julian Alps. If you are feeling particularly adventurous, there are other viewpoints that involve hiking through the woods and mountains to gain even more height for the views of the lake like Velika Osojnica, Mala Osojnica & Ojstrica.

In about 15 mins, we reached the castle and entered into the courtyard. The buildings inside the castle are arranged around two courtyards which are connected through stairs. We spent our time capturing the view of the lake and mountains from the castle, took it all in with a cup of coffee at the castle’s restaurant and soon after boarded the bus ride back to Ljubljana, still dreaming of the day we just had!

We did find our hidden castle in the mountains along with the fairy-tale valley of Bled! It truly is even more beautiful in real life than in photos & even a rainy or stormy day couldn’t diminish its beauty!