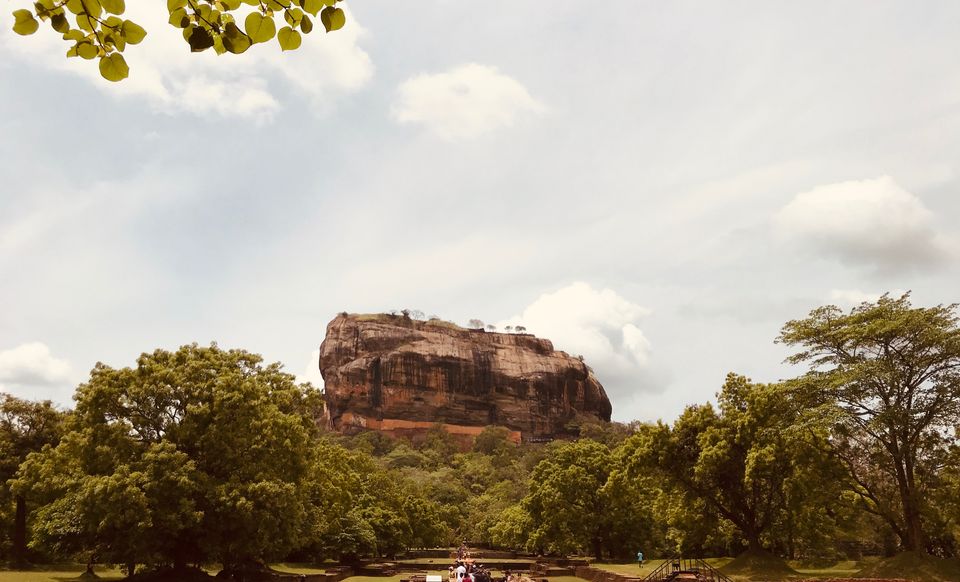 Just for namesake Sri Lanka is a foreign country for Indians. Because except for the national flag, colour and value of currency, there is hardly anything you will find horribly different from our own beautiful southern India. There is no time difference between the two countries, the people are friendly and can speak Hindi besides Tamil and their own Sinhalese language and you can build a quick camaraderie with the food.

Well, frankly speaking, though I had done my bit of research before venturing into the trip, however, I was left happily surprised when I landed in Bandaranaike International Airport in Colombo and found out that the country is not much different to southern India. My driver for the whole trip, Mr Chanakya who drove us from the airport to the hotel in Negombo, spoke good English and a bit of Hindi as well. And that's not all. He also had a fair sense of Bollywood.

After a good half an hour drive, I reached my hotel in late evening and was surprisingly greeted by the manager in Hindi, who was an Indian, settled in Sri Lanka. After a bit of scouting around the hotel and neareby areas we had our first taste of Sri Lankan cuisine in the hotel buffet during dinner. The spread was kept simple (keeping foreigners in mind) with a fair share of beef, chicken, and fish, besides two vegetarian dishes and the regular rice, rotis and salad. I skipped the beef and went for fish and chicken. And both had that succulent flavour of south India but made a bit spicy. After a good night's rest, a rejuvenated me was all set to explore the jewel of south Asia. But before I had to finish an unfinished business, which i was looking forward to since I opened my eyes in the morning. Though, I had kept my expectations low, after last night, the breakfast spread, as imagined was kept simple with several continental dishes comprising sausages, eggs, breads, pasta and toasts. Besides there was the regular puri/paratha sabzi, and the humble idly and dosa.

As we slowly drove out of Negombo towards the picturesque Kandy, I was taken aback by the lush green terrain, silky roads accompanied by an awesome weather. On the way, I could see how the country once locked in a brutal civil war for over a decade and was battered by the deadly tsunami in 2004 has slowly managed to brush off the past and stand up again. Infact, travel bible Lonely Planet has named Sri Lanka the best country to visit in 2019.

An hour and a half's drive and I was in the hilly terrains of Kandy, famous for the beautiful Tooth Relic Temple. Located in the Central Province, Kandy was the last capital of ancient king's era in Lanka. Built around a lake, the city is listed as an Unesco World Heritage site. As the tyres screeched to a halt near the hotel, drops of rain greeted me with open arms.

The hotel I was staying in Kandy was situated right on top of a hill offering some breathtaking views of the lush green terrain from the balcony. It felt like heaven, I said to my self as I sipped on to some specially handcrafted Sri Lankan tea.

Even as the rain halted, there was mist clinging to the hills surrounding the lake. And so without further adieu, I set out to pay a visit to the famous Tooth Relic Temple, which was around 5 km from the hotel. An architectural marvel in itself, the temple, also known as Sri Dalada Maligawa, is one of the most sacred sites in Sri Lanka. As I take a walk, I find that there is a striking contrast between the plain exterior and interior. Inside the 17th century temple, the interiors are richly carved and decorated with inlaid woods, ivory and lacquer. The relic itself rests on a solid gold lotus flower, inside a jeweled casket that sits on a throne. Besides the main attraction, the royal complex is home to several other temples, shrines and museums.

As I lazily strolled around the magnificent complex, I felt a deep inner peace settling within me as the evening slowly started to fade away. I spent the rest of the evening in leisure walking down the alleys of small town and its quintessential market. By nightfall, my mind was already thinking of the next experience: another world heritage site, Sigiriya.

At the stroke of the first light in the morning, I am all set to witness the great rock citadel. After nearly over a 2 and a half hours drive crossing Dambulla on the way I finally reach world-famous Sigiriya. Rising flamboyantly from the central plains, the enigmatic 'Lion Rock' seemed like a drama unfold before my eyes. Though, not a great fan of heights, but in a bid to know the secrets the Rock fortress holds, I take up the challenge to climb a series of narrow, colonial-era steep metal stairs attached to the sheer walls to climb the top. On the way, I witness some ancient paintings, graffiti, and a pair of lion's paws craved into the bedrock. After nearly an hour's climb, I finally reach the top, with my legs almost turning numb. Yet, having conquered the dreaded trek, I raise my hands in sheer joy and punch the air.

A gust of wind kisses my face atop the spacious summit holding enchanting views as I take a stroll on the remains of what was once a part of King Kassapa's palace. After soaking the history and capturing the views in my camera, I climb down the stairs with a sense of satisfaction and some memories to cherish.

On the way back from Sigiriya, I stop by the Dambulla cave temple, another World Heritage Site. After another climb, I reach the spot comprising five caves, housing statues and images of Buddha. The paintings inside the cave is believed to belong from 8th century AC.

I reached my hotel at nightfall and with an adventurous day coming to an end, I hit the bed thinking of the stunning azure beaches, which will dawn before me tomorrow.

After a good night's sleep, and having being recovered from last day's fatigue I was looking forward to the remaining half of my wanderlust. After a hearty breakfast, which was a mix of continental and Indian, I hit the road leading towards Hikkaduwa, a beach paradise in the southern coast of Sri Lanka.

"Sir, are you visiting Hikkaduwa to do surfing and snorkeling?" asked my driver Chanakya . But before I could respond, he was quick to enlighten me that these activities will be out of bounds due to high sea tides and currents. "These activities best during October to April sir," he said. As I looked at him rather disappointed, he was quick to show me the guide in him. " Sir, I can show you whales and dolphins, if you like, at Mirissa," he said. Though I liked the idea, but since the chances that one could get to see whales and dolphins depended on sheer luck, I politely rejected the idea and chose to the 'touristy' type instead rather than being too adventurous.

The hotel I had booked was just a stone's throw away from the gorgeous beach. Home to some of vibrant and colourful aquatic life, the Hikkaduwa is famous for seafood, relaxing messages, Buddhist temples and of course water activities. A walk in the beach with the sound of the tranquil water crashing on the rocks with the sun setting on the background simply appears to be part of a photograph.

The next day after lazying around in the beach for some time, I venture out to catch a glimpse of the beauty Hikkaduwa has in store. My first stop was the Gangarama Maha Vihara, a buddhist temple overlooking the serene Indian ocean and comprising some interesting paintings by one man done over a decade. On the way to Unawatuna, a famous beach in Galle, I stopped by the Tsunami museum, which tells the story of the 2004 disaster in which more than 35,000 people lost their lives through several photographs and newspaper clippings.

After a brief stop at the serene beach at Unawatuna, I head towards the historic city of Galle, which was around 6 km away.

The city of Galle is a jewel in itself. Blessed with exotic Dutch- colonial buildings and churches, it is another Unesco World Heritage site. As you wander into the myriad alleys you will notice quirky cafes and shops, which gives Galle an exotic appeal. An appeal, which brings the Fort into life. A walled enclave, the fort is surrounded by the ocean on three sides with the Galle cricket stadium overlooking it. It felt as if time stood still as I stood there witnessing the ocean turn into a sea of orange as the sun began to set in the horizon. The sound of the water crashing into the rocks only added a nice flavour to the beautiful evening. Galle enchanted me with its endless glory and rich history. It gave me a memory to cherish forever, a memory which I will carry home and keep it inside me with all love and care, till I come back again... if possible.