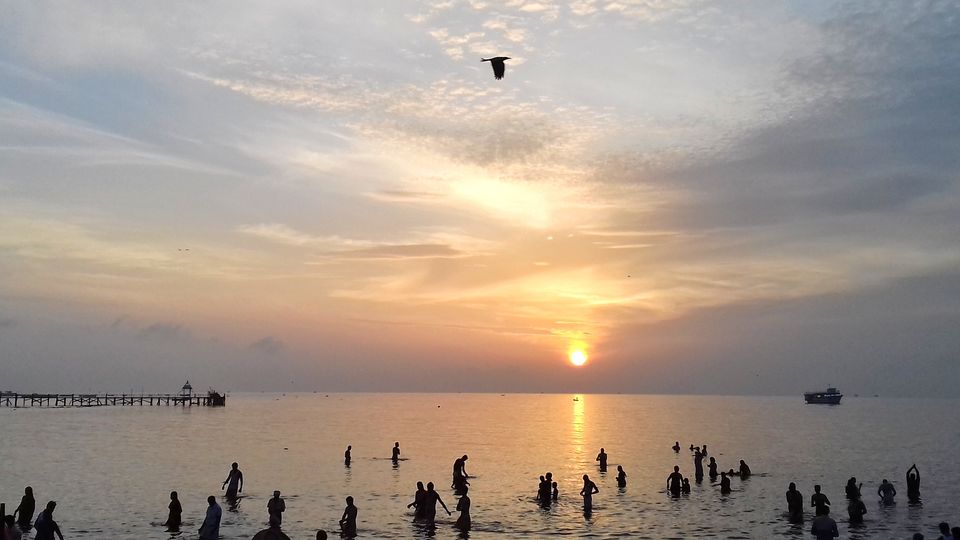 Tamil Nadu, the land of temples, has a lot to offer when it comes to some of the most amazing destinations in India, among which Rameshwaram, Kanyakumari and Madurai stand out as three of the most stunning places in Tamil Nadu. These three cities are in close proximity to each other and form what is called as a South India temple tour.

My journey started from Bangalore to Rameshwaram via ECR and then to Kanyakumari followed by Madurai via NH 44 terminating in Bangalore. The roads are absolutely wonderful and a pleasure to drive on which only adds to the supreme experience of the road trip. 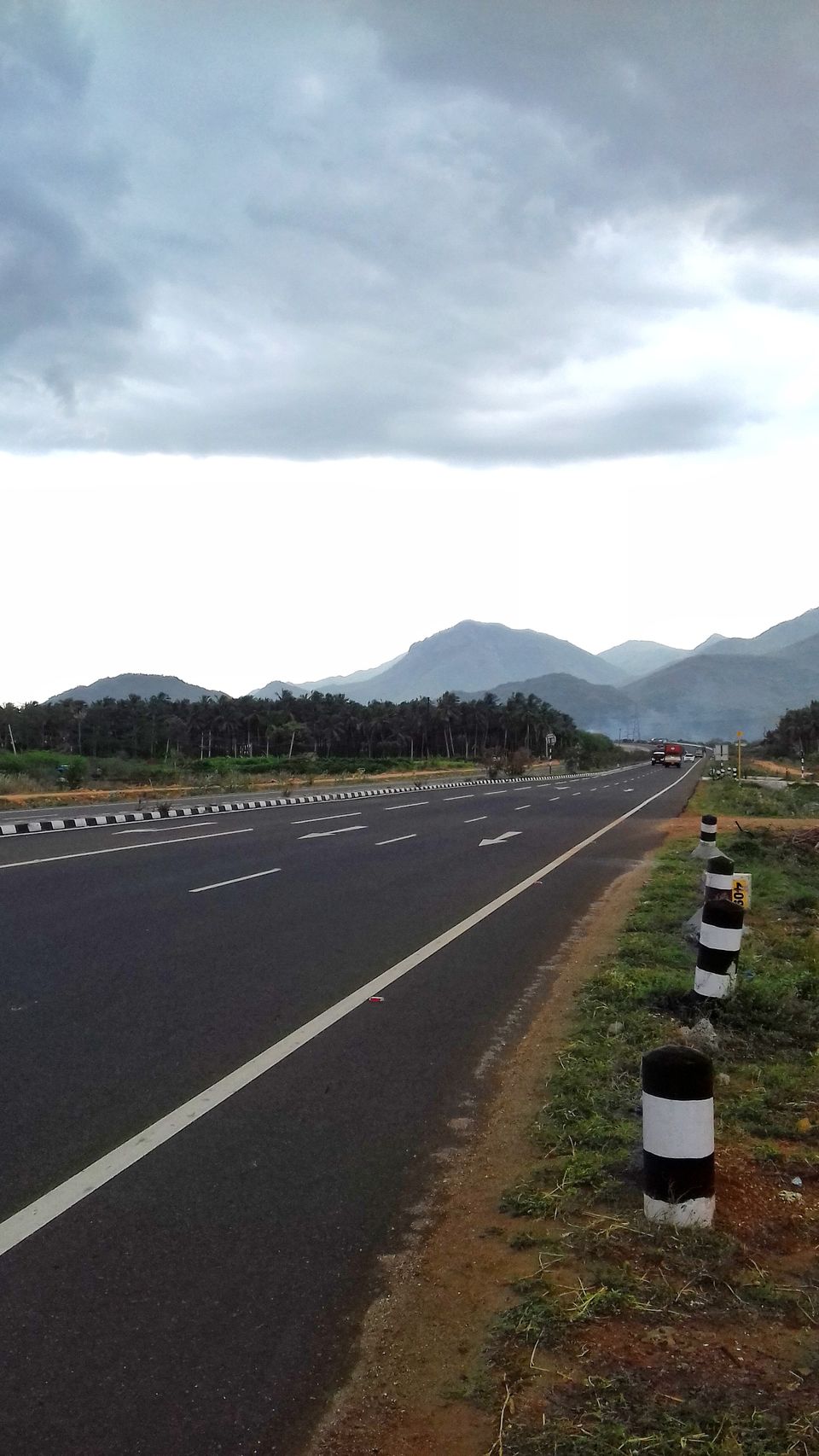 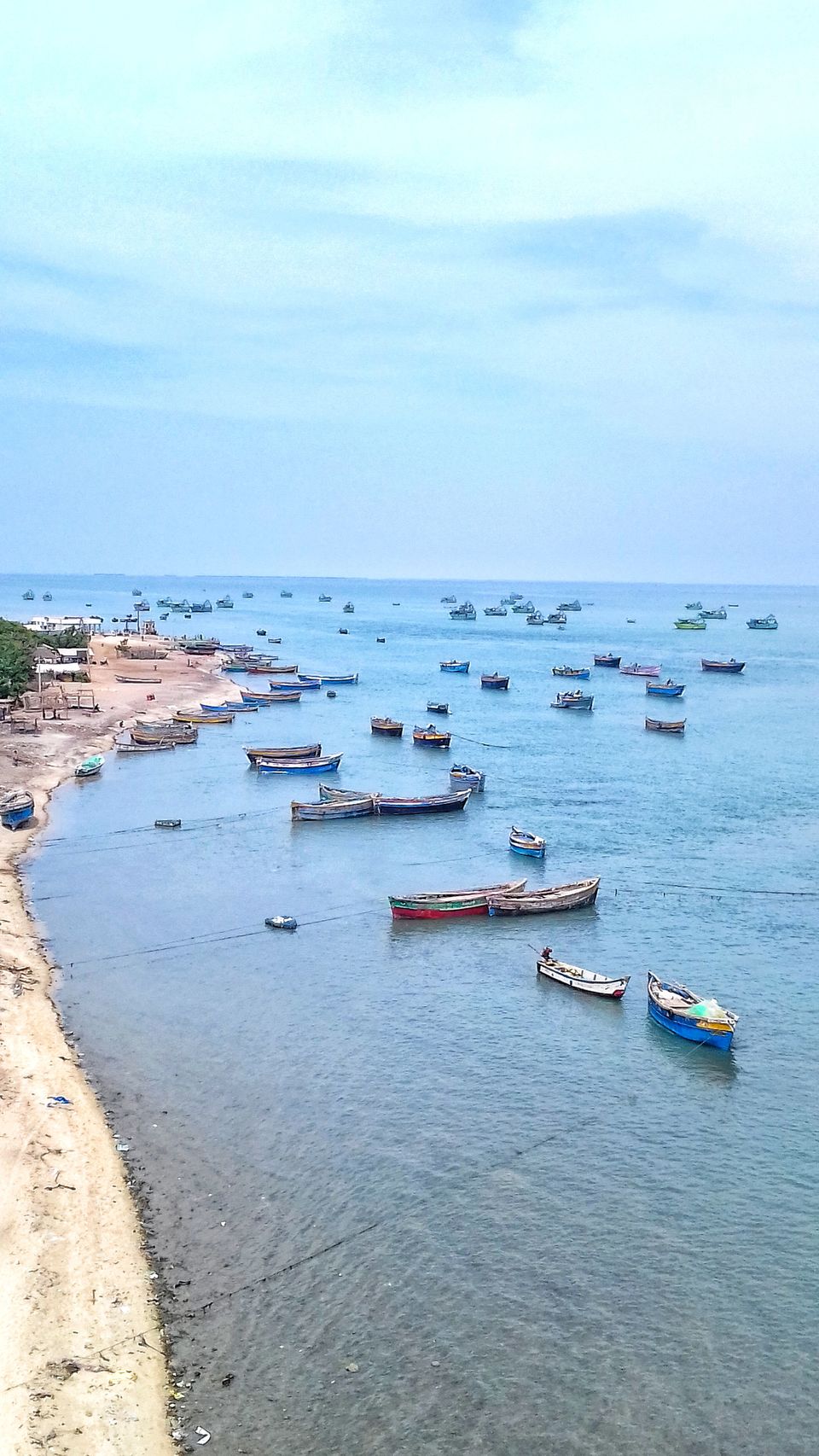 Rameshwaram, a town in the state of Tamil Nadu, is located on the Pamban island situated in the Gulf of Mannar at the tip of the Indian peninsula and is connected to the mainland India by the Pamban Bridge. The Pamban Bridge is a railway bridge, opened in the year 1914, was India's first sea bridge. A road bridge was constructed parallel to the Pamban Bridge known as Annai Indira Gandhi Road Bridge. 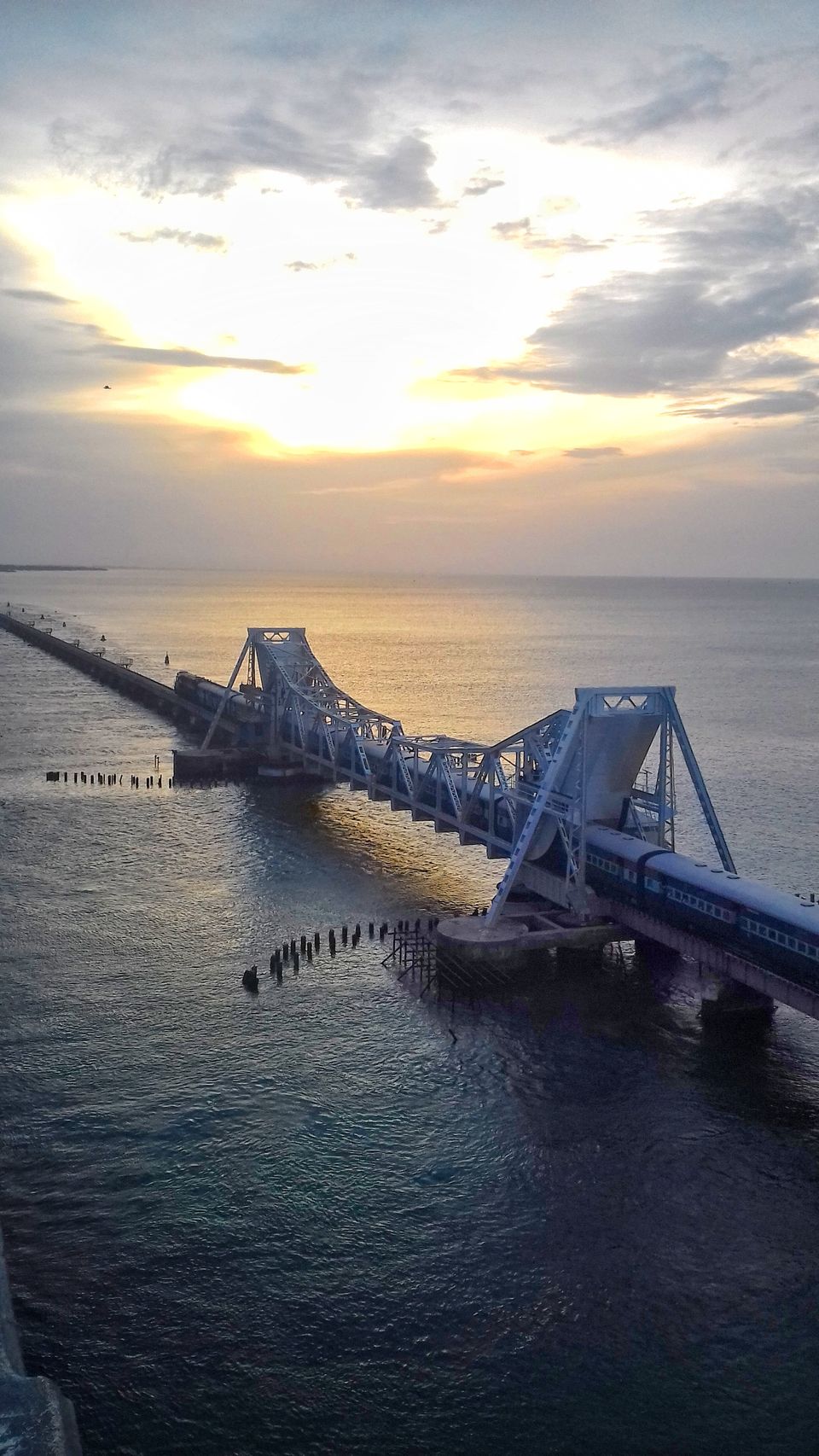 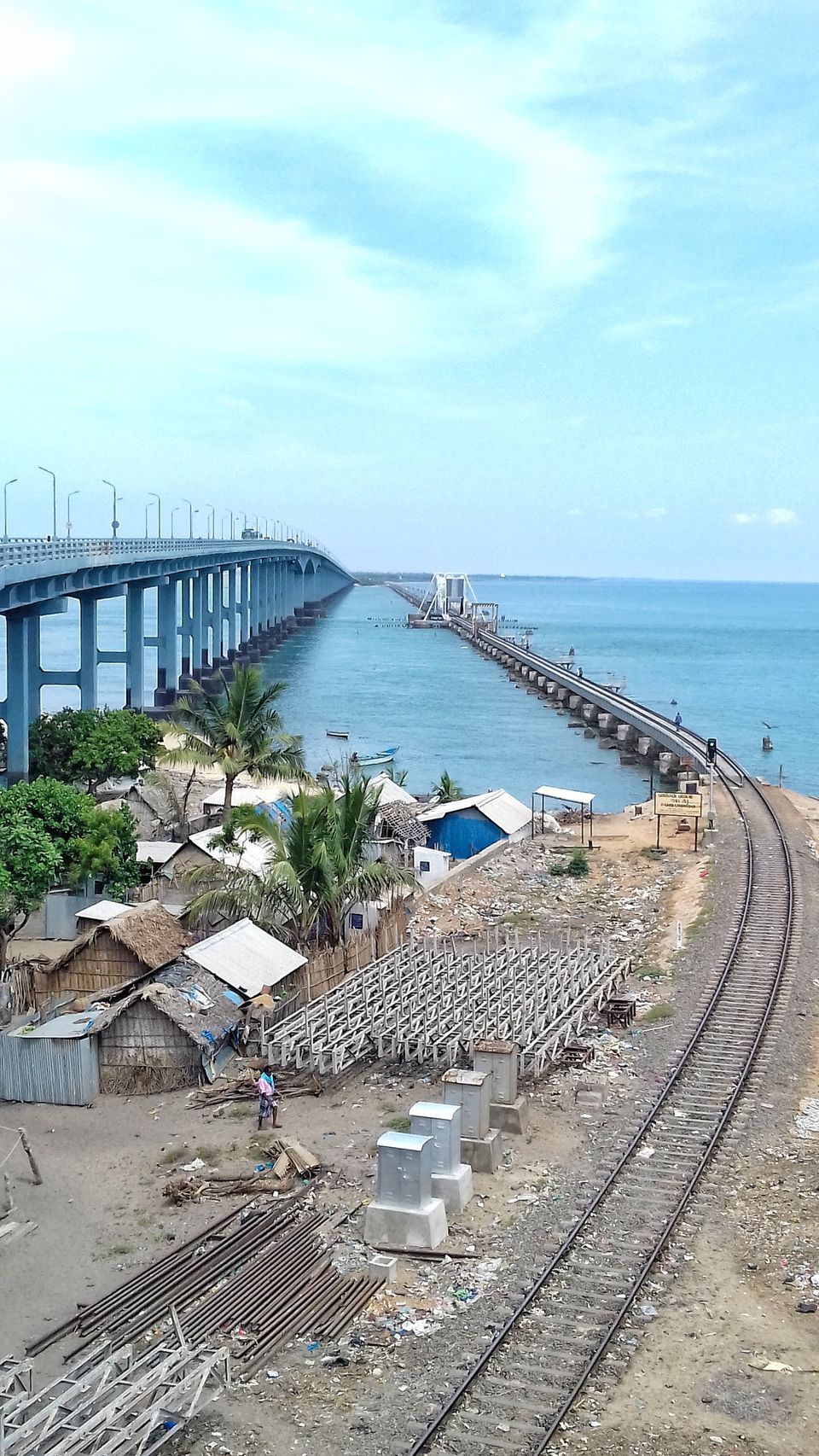 Rameshwaram is considered to be one of the holiest places in India to hindus. The Ramanathaswamy Temple, dedicated to the Hindu god Shiva, is located at the centre of the town. The temple has 22 theerthams (holy water bodies) within its precinct in the form of wells. The foremost one is called Agni Theertham, the sea which is the Bay of Bengal. Bathing in these theerthams is a major aspect of the pilgrimage to Rameshwaram and is considered equivalent to penance. Rameshwaram along with Badrinath, Puri and Dwarka form the holy Hindu Char Dham (four divine) sites. 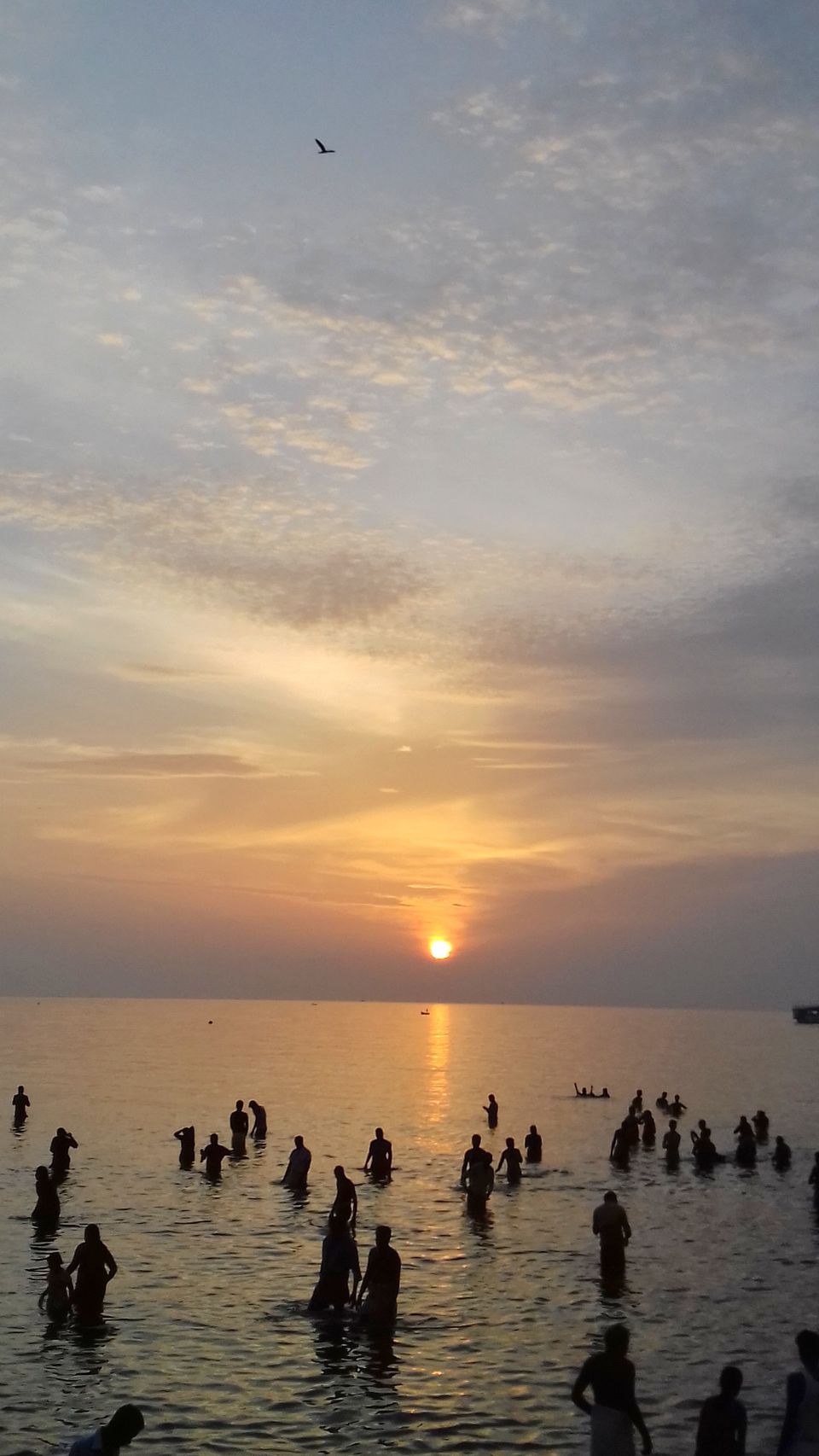 A trip to Rameshwaram is never complete without going to Dhanushkodi, an abandoned town at the south-eastern tip of Pamban Island, roughly 20 kms from Rameshwaram. Dhanushkodi is a spectacular stretch of Tamil Nadu with the Bay of Bengal on one side and the Indian ocean on the other. This stretch eventually ends in a Sangam (confluence), where in the Bay of Bengal merges with the Indian ocean. It is a visual treat and incredibly beautiful as it gradually changes color with the setting sun. 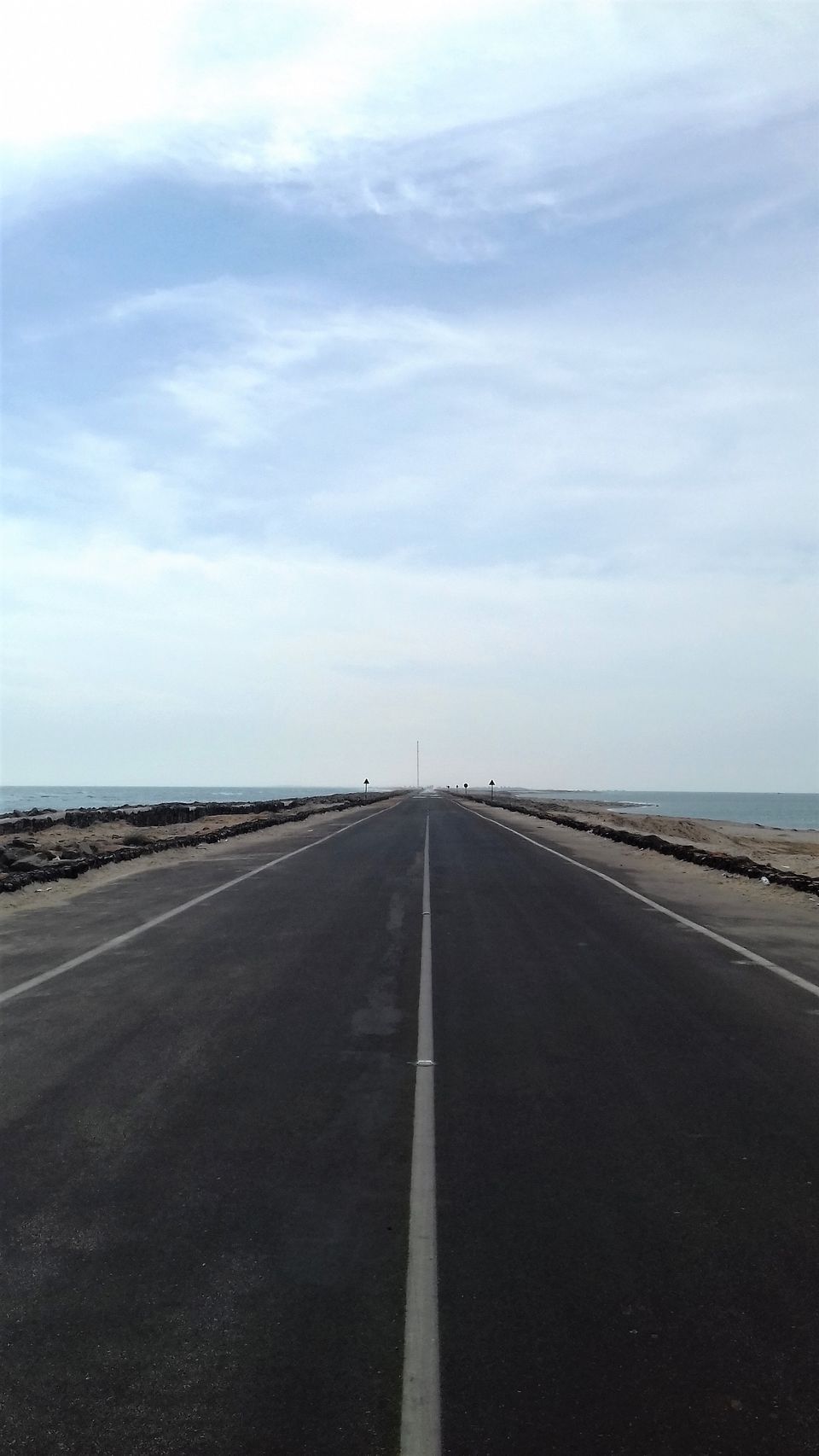 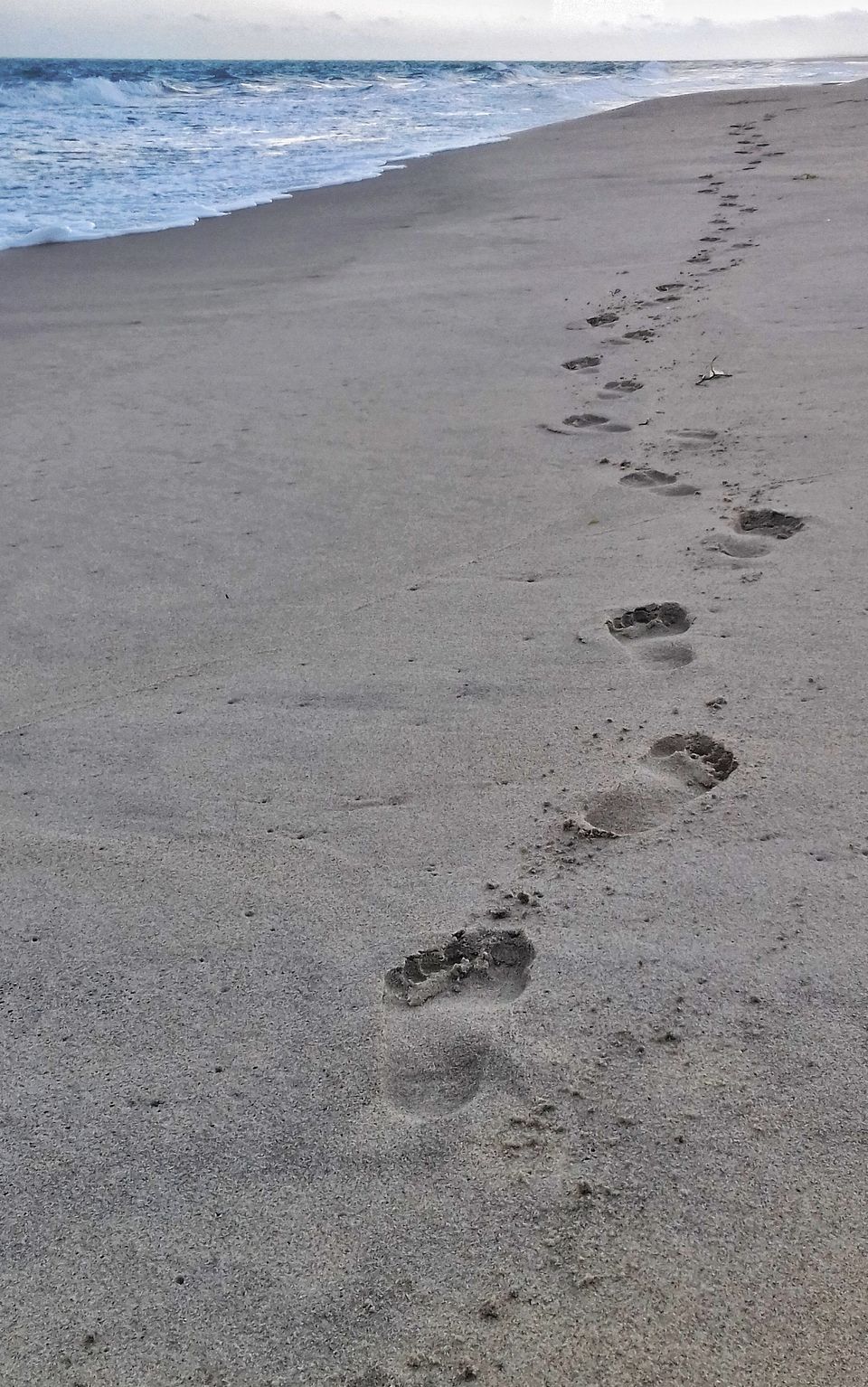 In December of 1964 a cyclone wiped out the entire village of Dhanushkodi resulting in an abandoned ghost town as we see now with its ruins and the dilapidated remains of what was once a flourishing town. However, it is occupied by fisherfolk who seem to live in isolation and with intermittent connection to the mainland and their main means of survival seems to depend on the fish they catch from the sea. 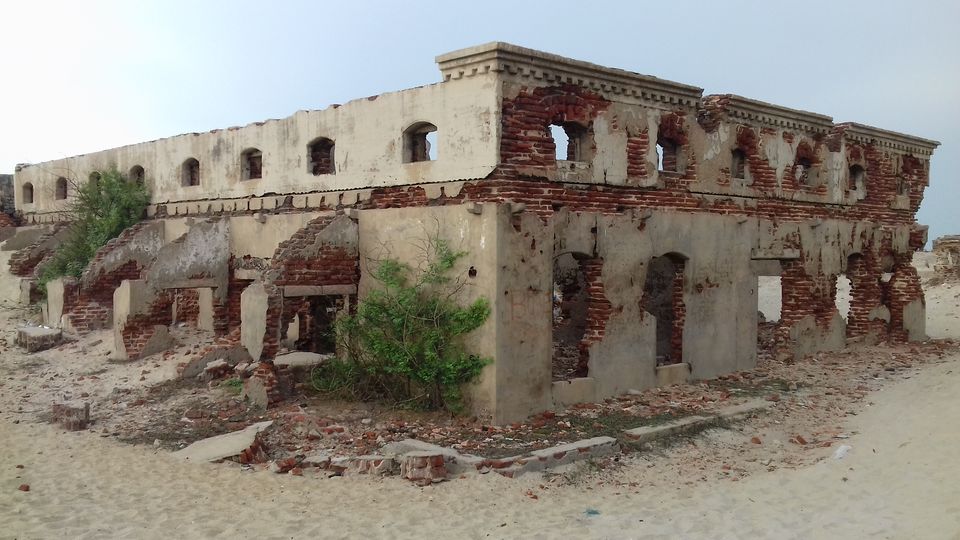 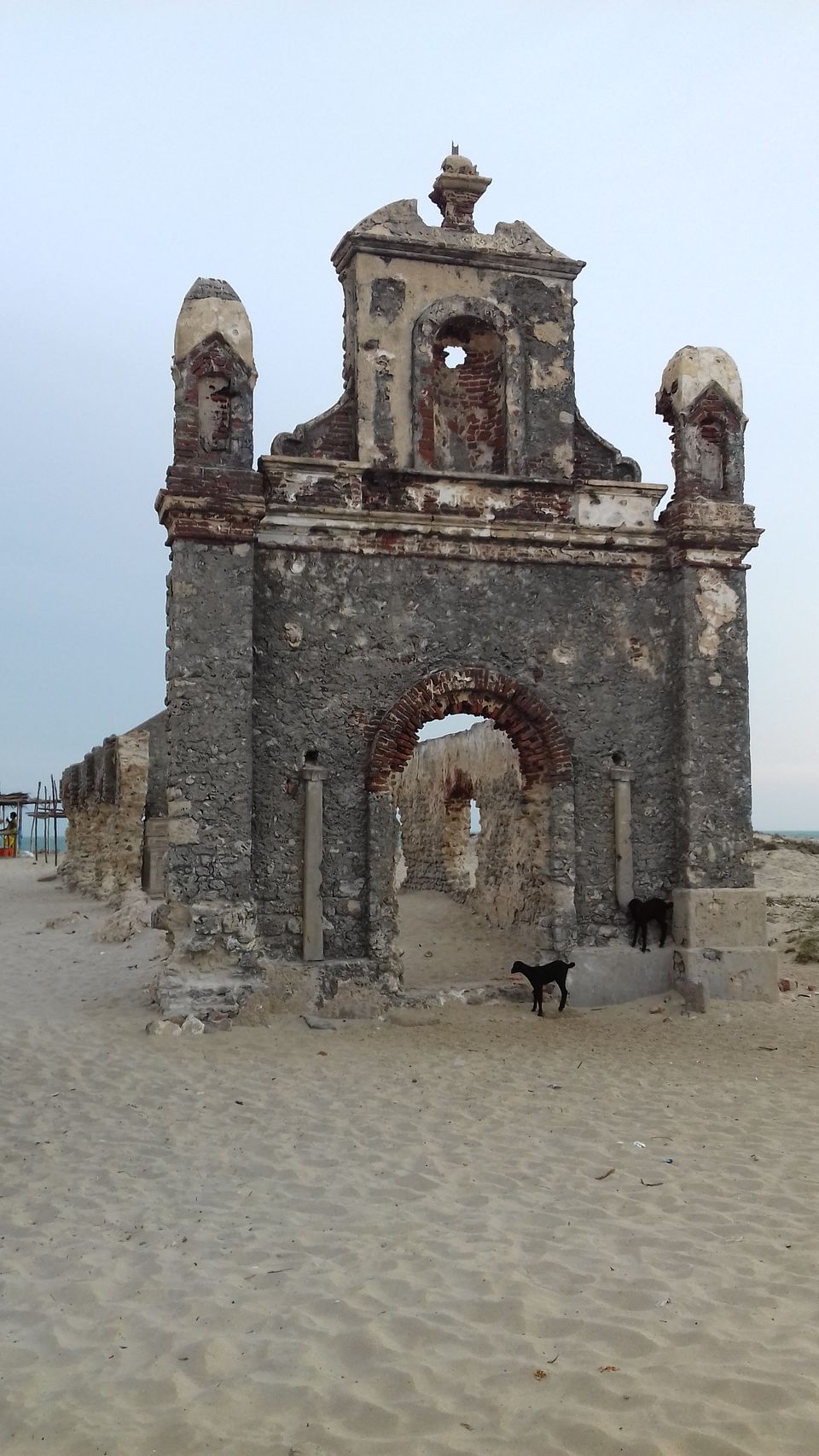 Rameshwara means "Lord of Rama" in Sanskrit. According to Hindu epic Ramayana, Rama, the seventh avatar of the god Vishnu, prayed to Shiva here to absolve any sins that he might have committed during his war against the demon-king Ravana in Sri Lanka. Ramsetu Bridge is a chain of limestone shoals, between Rameswaram and Mannar Island, off the northwestern coast of Sri Lanka. The sea separating India and Sri Lanka is called Sethusamudram meaning "Sea of the Bridge". The Ramayana attributes the building of this bridge to Rama, naming it Sethusamudram which was built by the Vanara (ape men) army of Rama, which he used to reach Lanka and rescue his wife Sita from the demon king Ravana. This can be seen clearly from the air.

A visit to Rameshwaram is a must since it is one of the extreme points of India and it hosts a rich culture and heritage along with spectacular views.

Further south from Rameshwaram will take you to the southernmost point of peninsular India, Kanyakumari. Formerly known as Cape Comorin, Kanyakumari is surrounded by sea on all three sides, namely Bay of Bengal, the Arabian sea and the Indian Ocean. 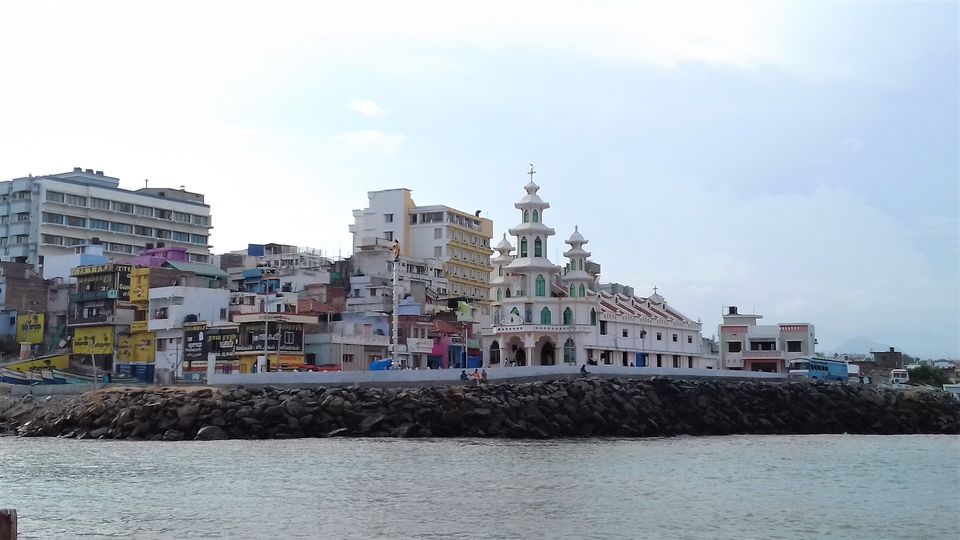 Kanyakumari is known for its sunrise and sunset views owing to the fact that it is surrounded by water on all three sides. The best point to view sunrise is at the sunrise point facing the Vivekananda Rock Memorial. The sun rises from the horizon next to the Vivekananda Rock Memorial and the Thiruvalluvar statue thus illuminating the beautiful sky over the splendid sea which is a spectacular event to say the least. Almost the entire town gathers along to watch the sunrise at the southernmost tip of the Indian subcontinent. 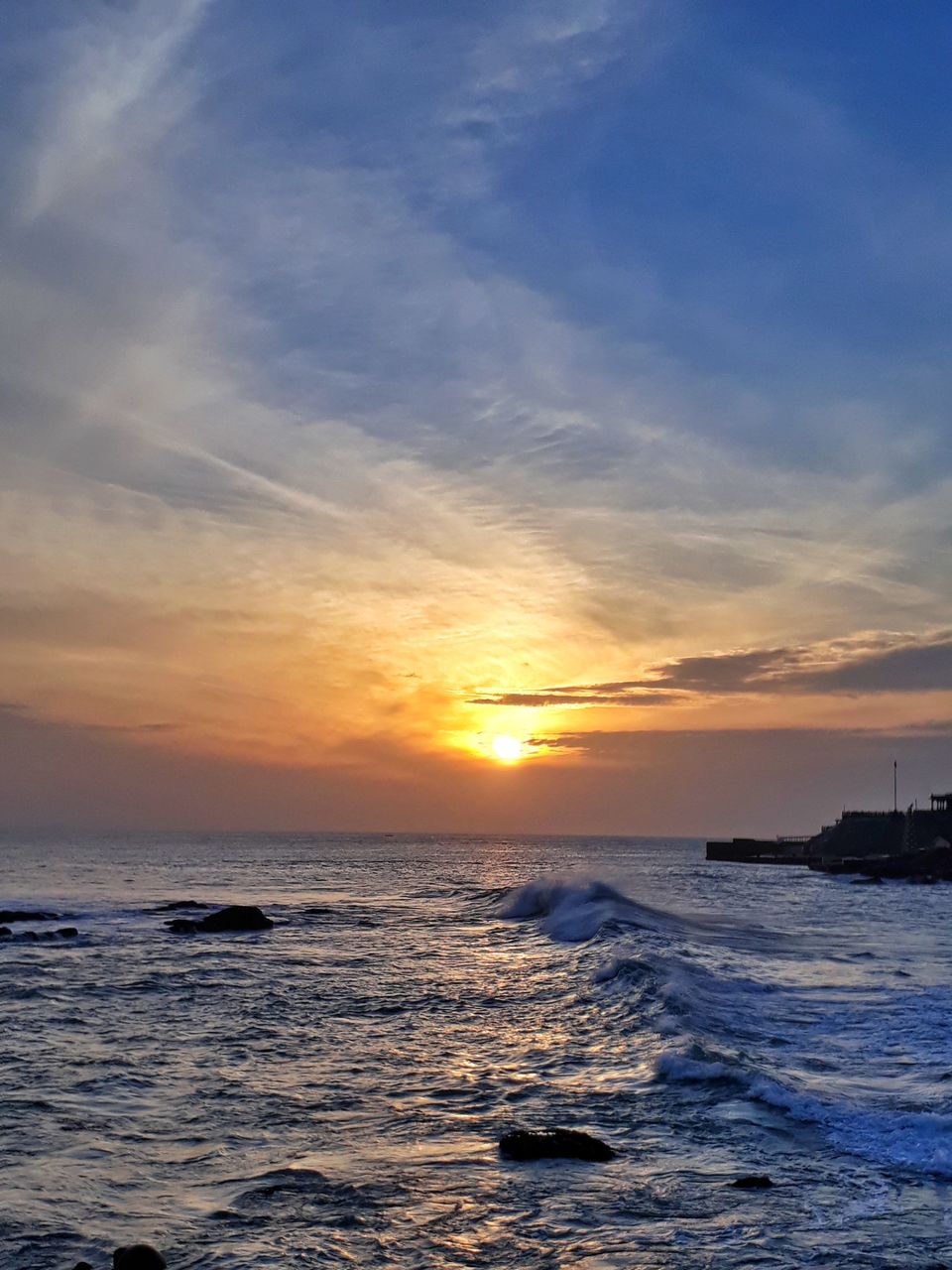 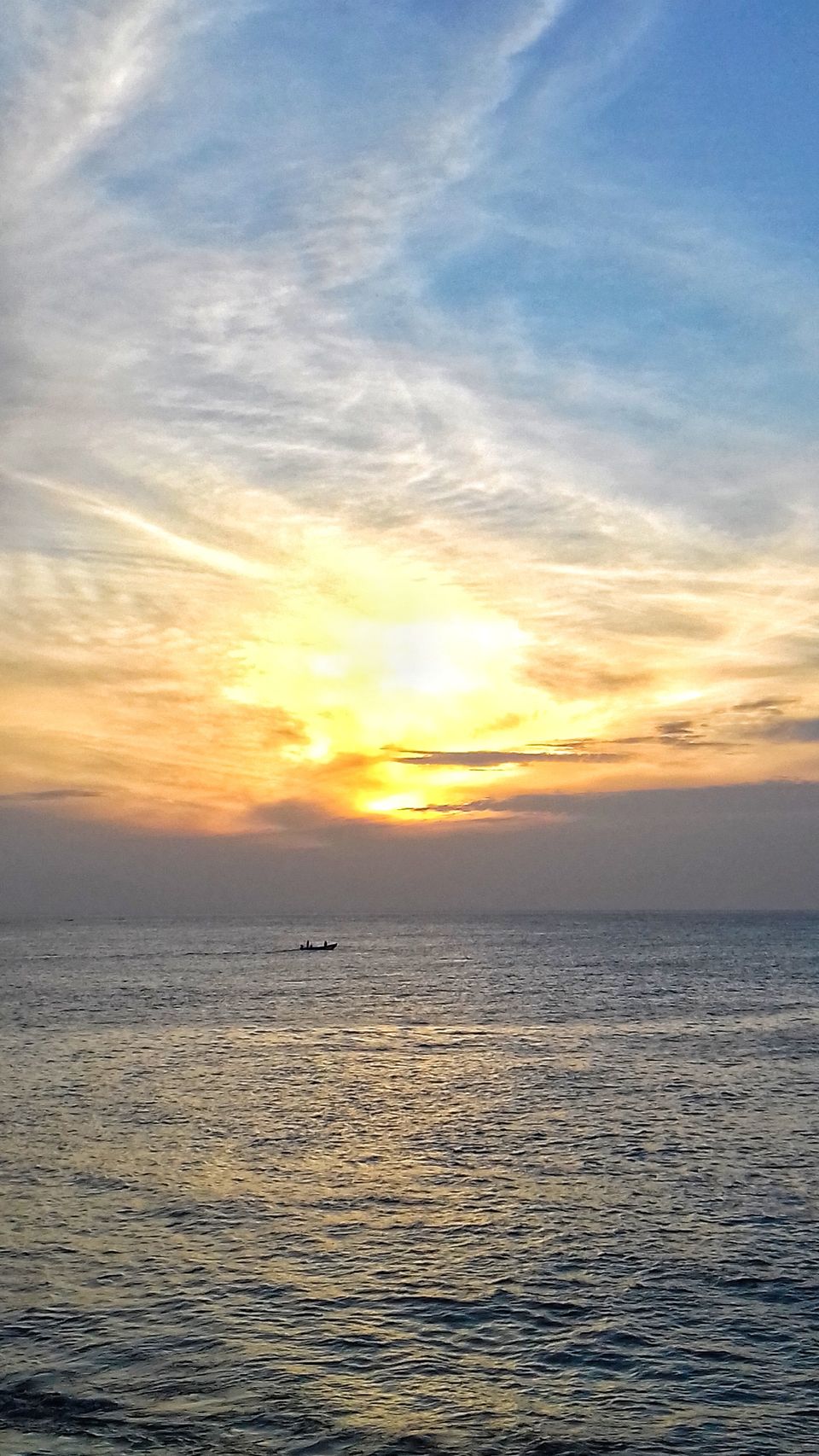 Sunset can be enjoyed at the sunset beach located on the south western part of the town where a lot of people assemble at the shore to witness this breathtaking sight. 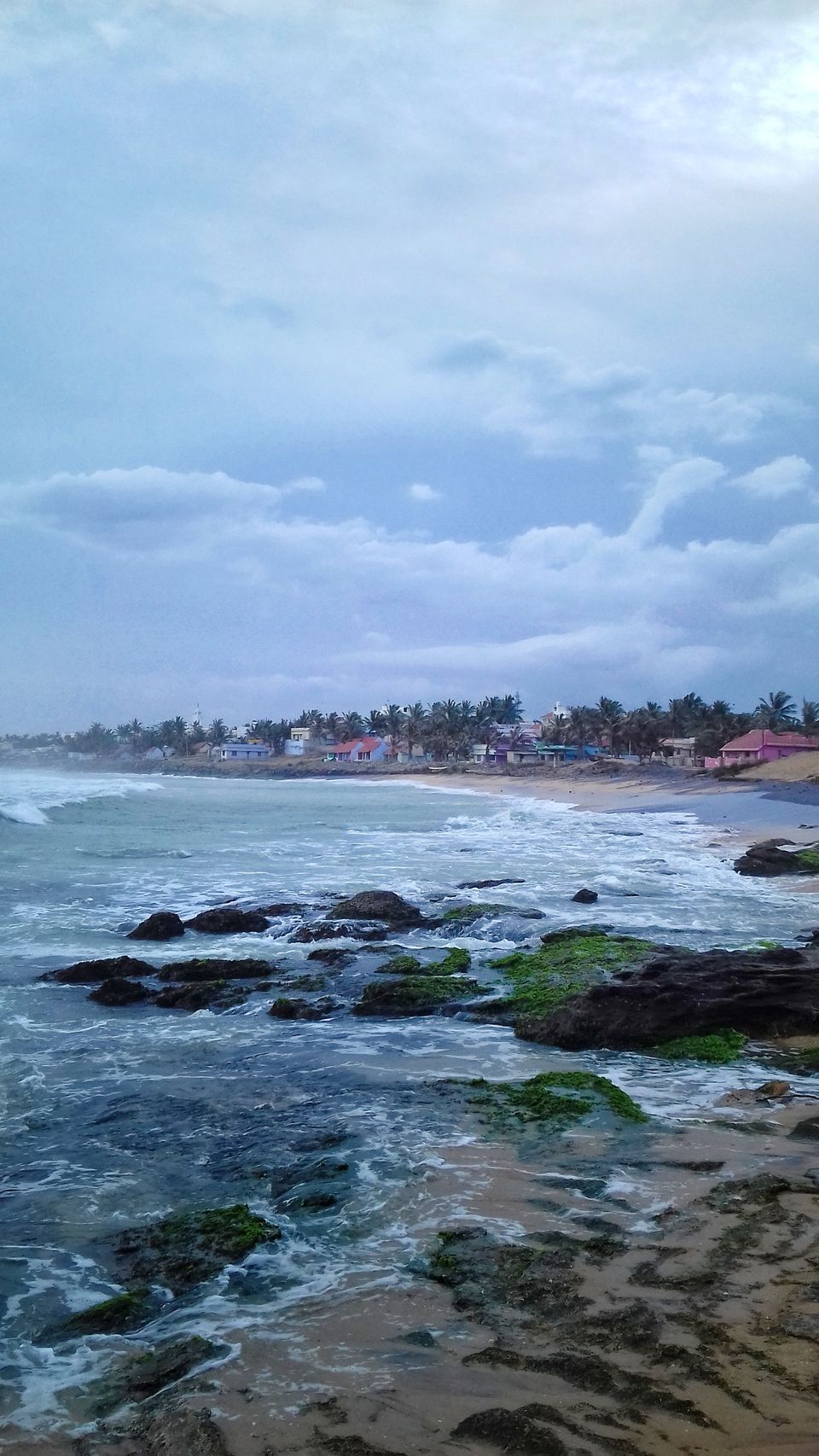 Sunset over the sea 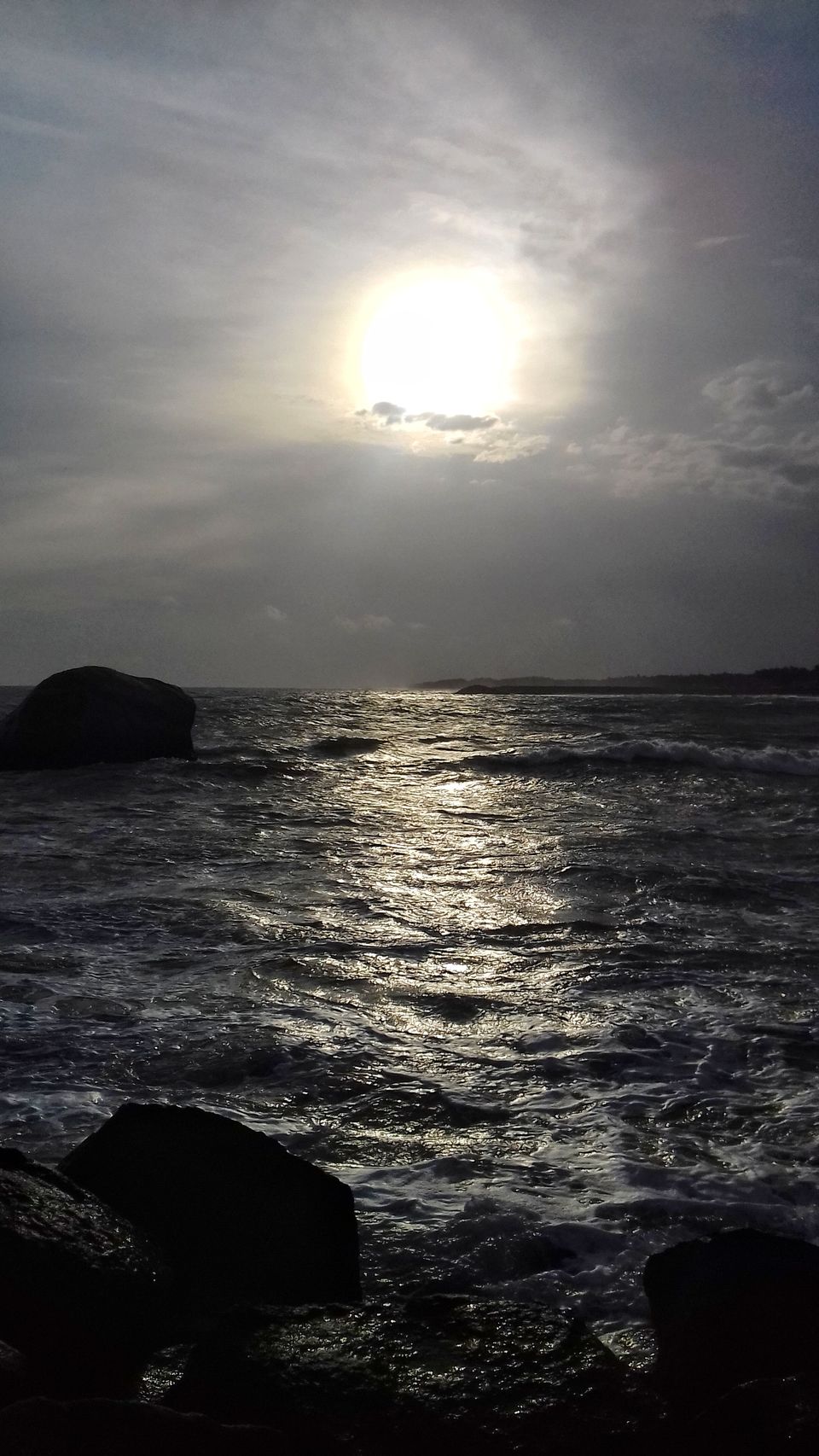 Other points of interest in Kanyakumari include the Thiruvalluvar Statue has a height of 95 feet (29 m) and stands upon a 38 foot (11.5 m) rock which represents "wealth" and "pleasures", signifying that wealth and love be earned and enjoyed on the foundation of solid virtue. This is located about 500 metres east of the mainland and can be reached by taking a ferry from a docking point in Kanyakumari town. However, entry is restricted during rough seas and maintenance work.

The Vivekananda Rock Memorial stands on one of two rocks located about 500 metres east of the mainland of Vavathurai, India's southernmost tip. It was built in 1970 in honour of Swami Vivekananda who is said to have attained enlightenment on the rock. can be reached by taking a ferry from a docking point in Kanyakumari town. 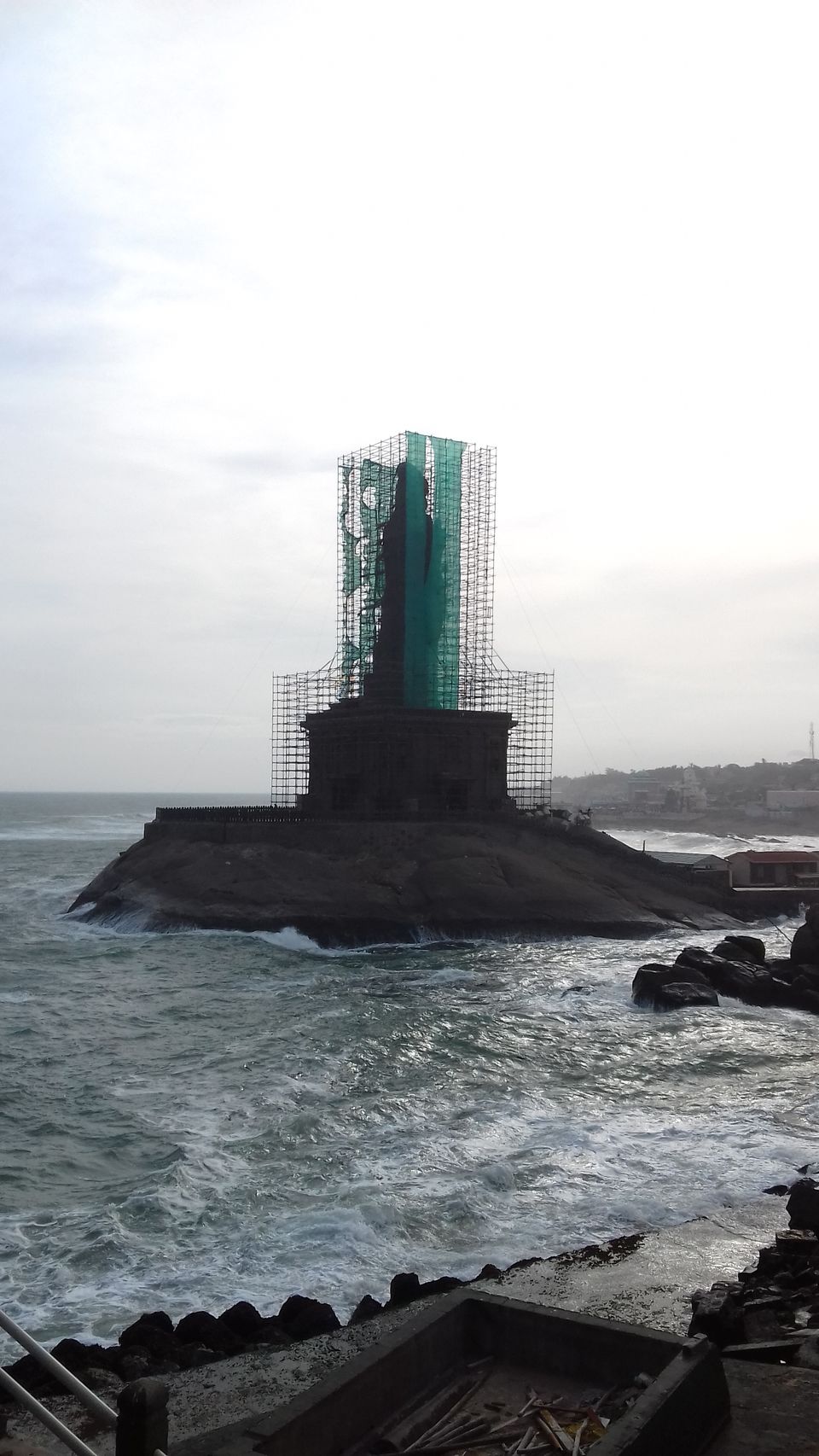 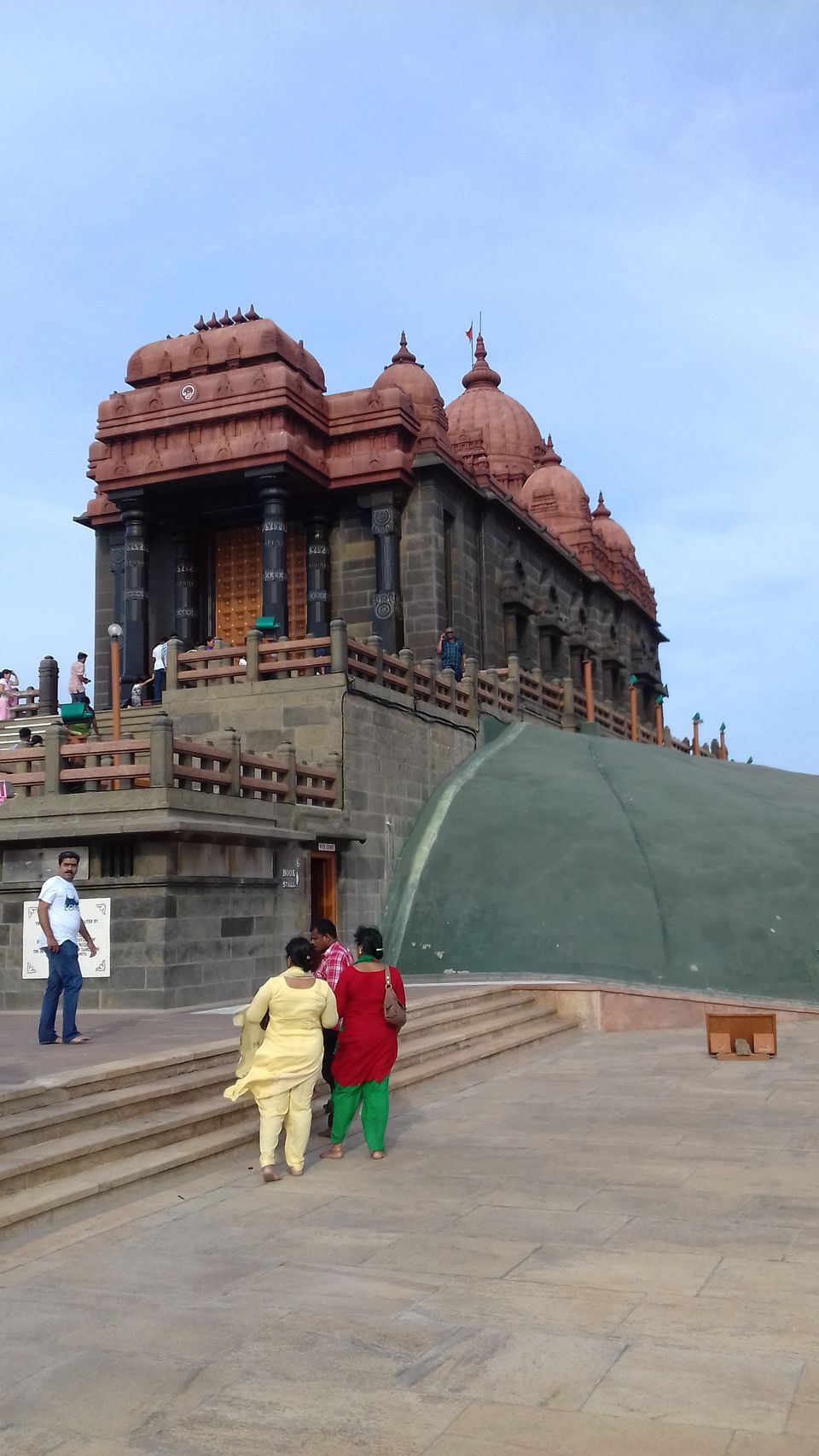 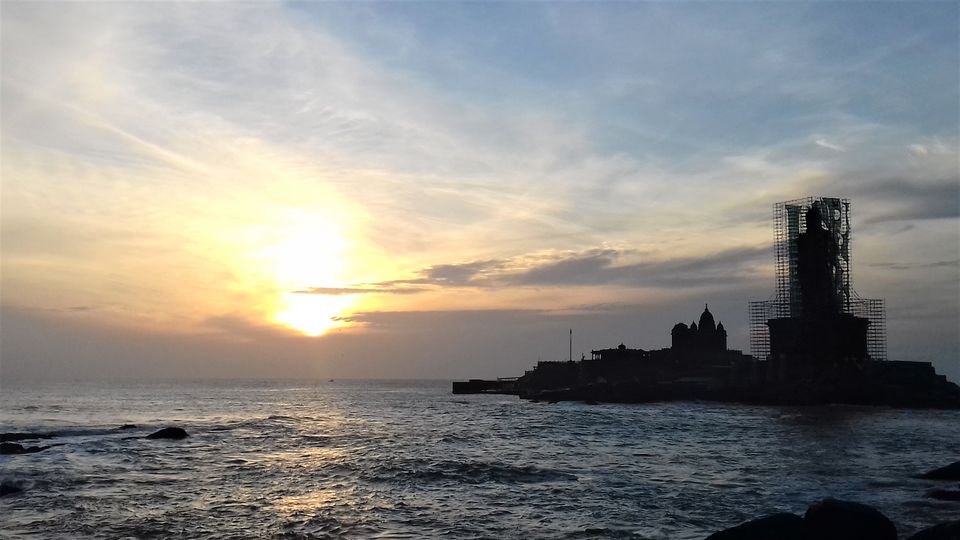 The highlight of the trip was the ancient and vibrant city of Madurai. Often referred to as the Temple city or the Athens of East, Madurai claims the soul of Tamil Nadu. It is one of the oldest cities in India, a metropolis that traded with ancient Rome and was a great capital long before Chennai was even dreamed of. People from all over India and abroad come here for the absolutely amazing Meenakshi Amman Temple, a dazzling maze-like structure ranking among India's greatest temples. 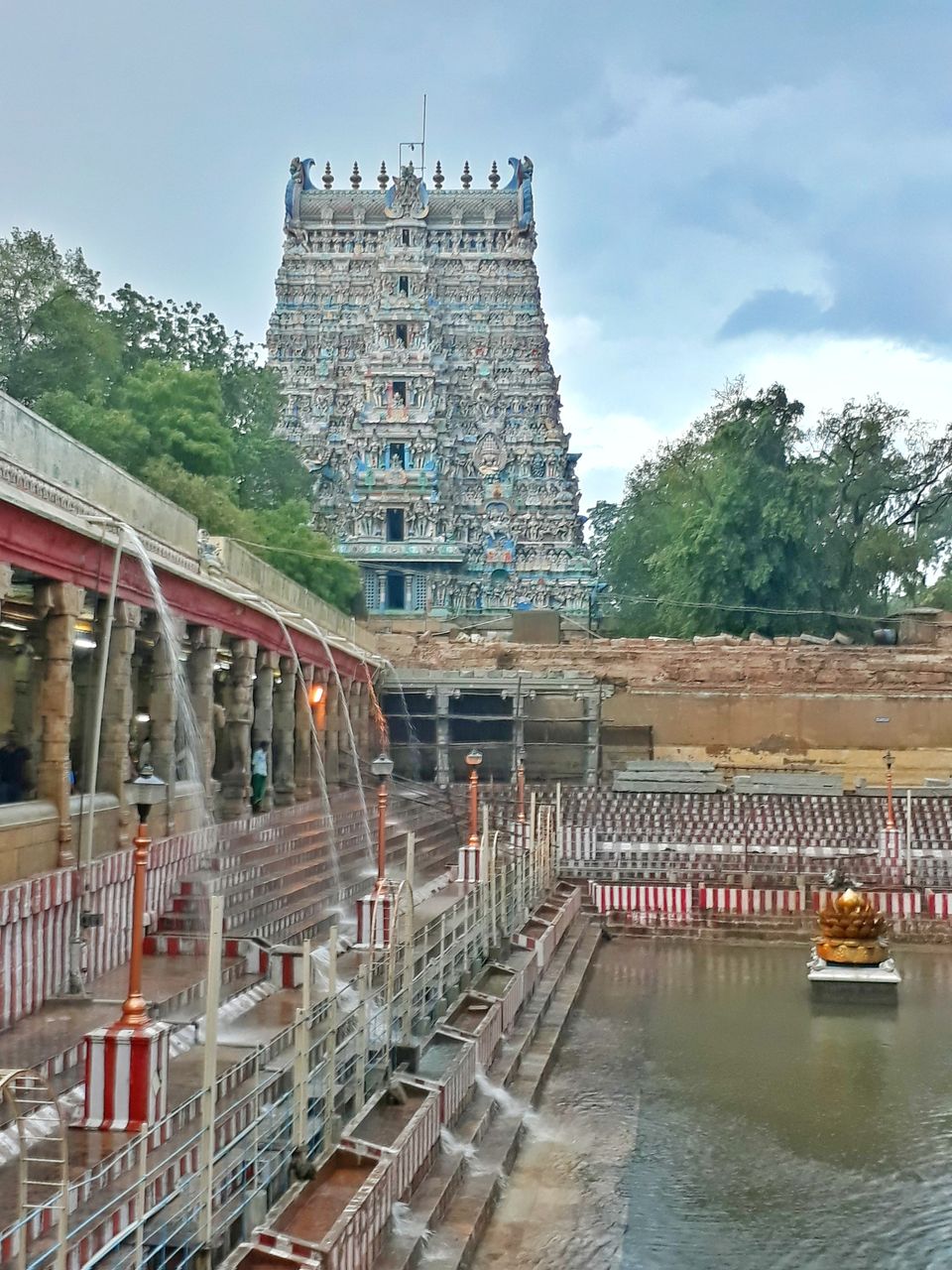 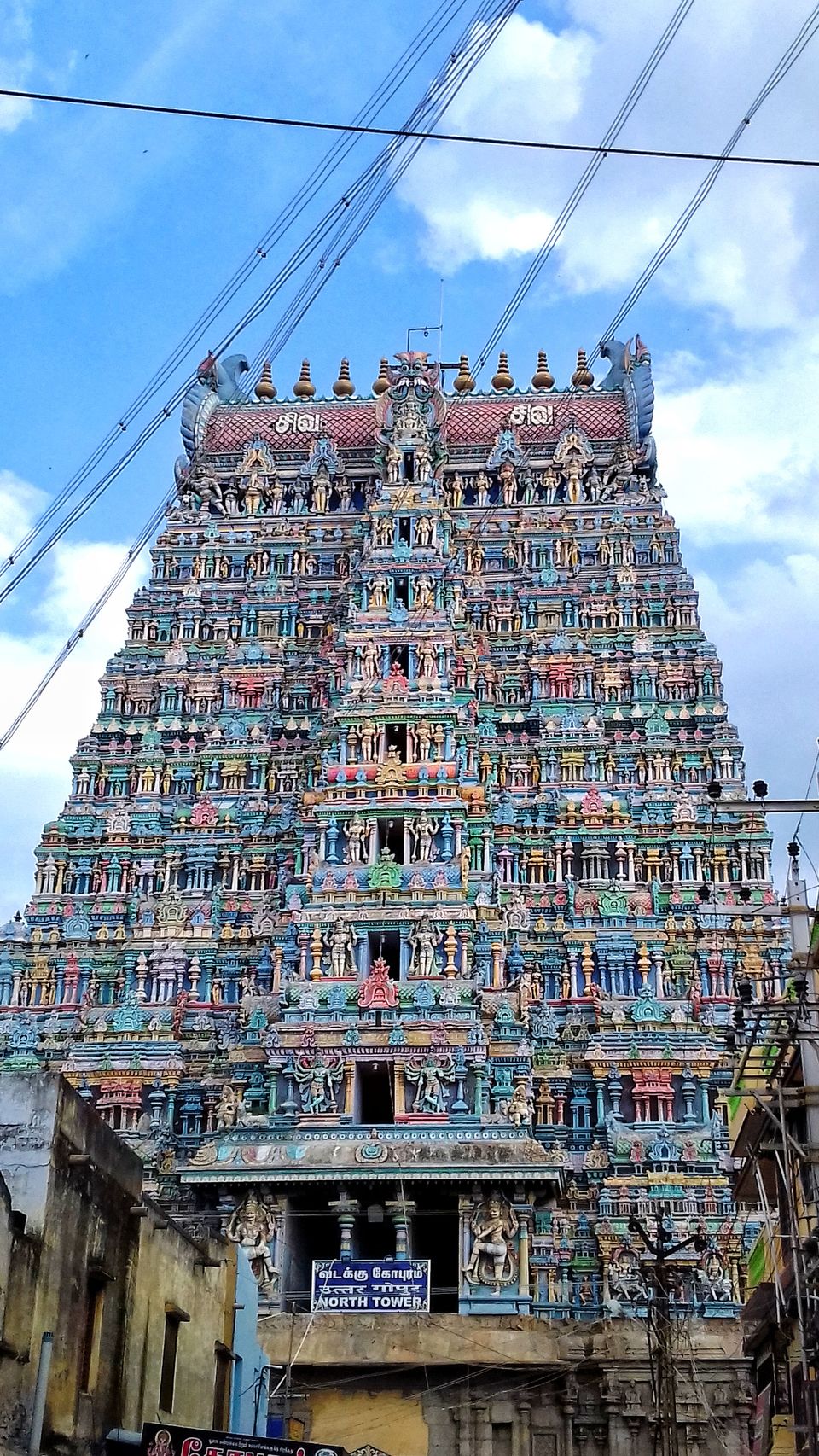 Meenakshi Temple is a historic Hindu temple dedicated to Parvati, known as Meenakshi, and her consort, Shiva, here named Sundareswarar. The temple forms the heart and lifeline of the 2,500-year-old city of Madurai. There are an estimated 33,000 sculptures in the temple. It was on the list of top 30 nominees for the "New Seven Wonders of the World". Sprawled in an area of 45 acres, the temple complex comprises not less than twelve superlative gopurams (towers), which are richly sculptured and decorated. The tallest tower rises to the extent of 170 feet. 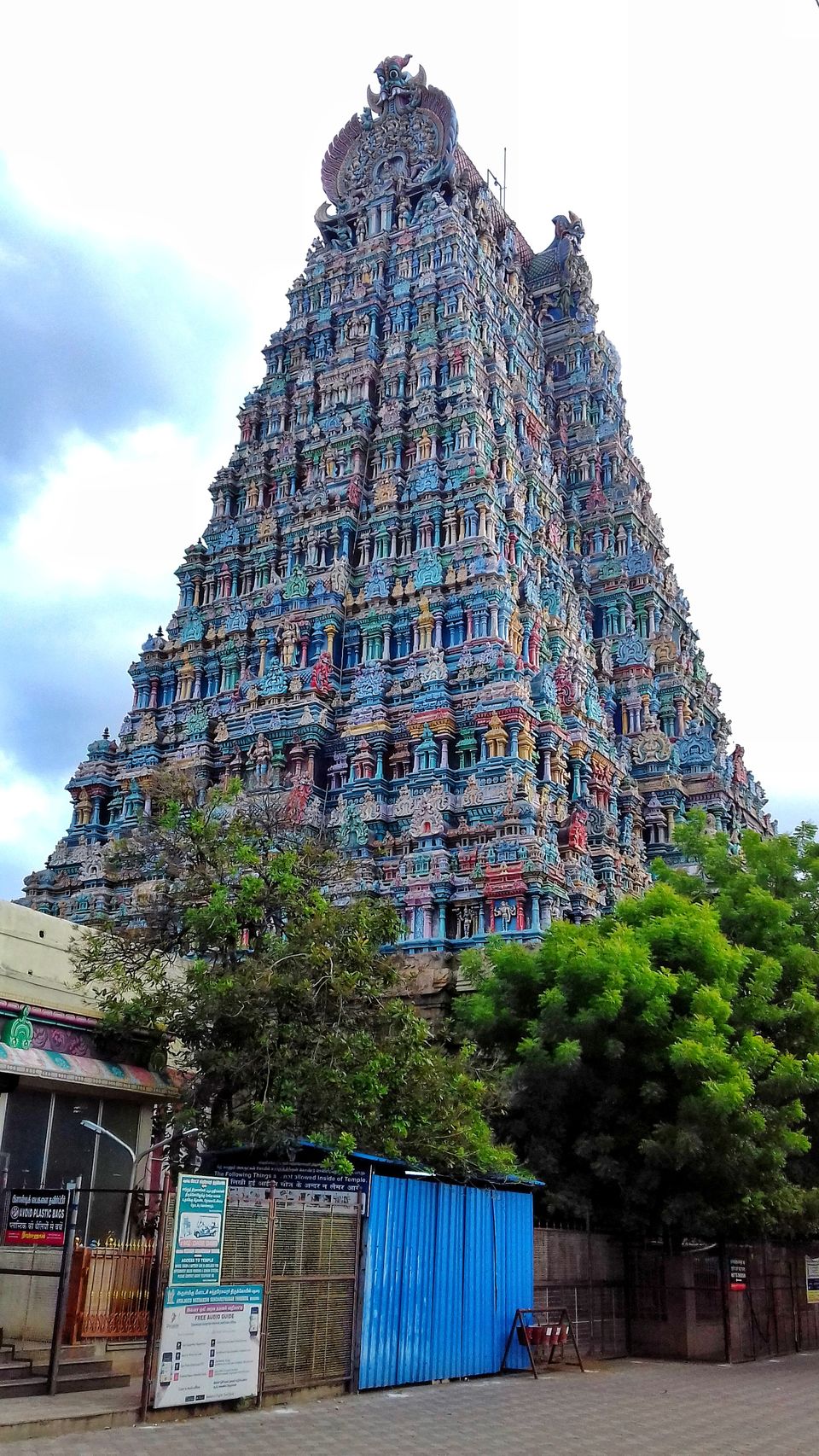 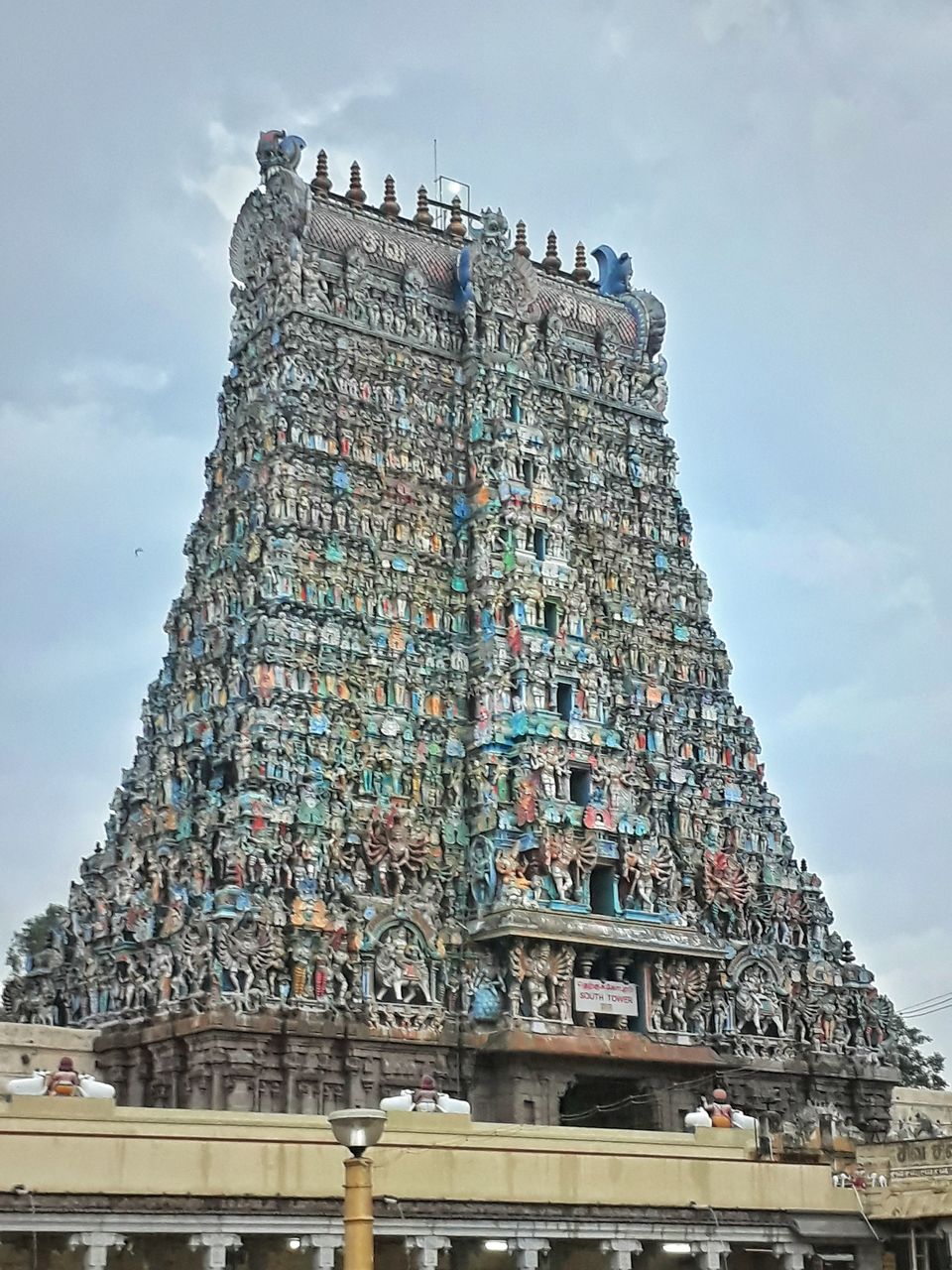 Exploring and navigating this massive temple complex is an experience in itself. It will take an easy 3-4 hours to explore the temple and it is highly recommended to hire a guide to help you with the tour and also to gain a unique insight from locals such as them with regards to the history behind this temple. This temple is a paradise for photographers, however, deities are allowed to be photographed. You will be in awe and wonderment with its meticulously detailed beauty.

The temple complex is divided into a number of concentric quadrangular enclosures contained by high masonry walls. It is one of the few temples in Tamil Nadu to have four entrances facing four directions.

For me the main attraction of this temple is The Meenakshi Nayakkar Mandapam, also known as Hall of Thousand Pillars. It has two rows of pillars carved with images of yali (mythological beast with body of lion and head of an elephant). The Thousand Pillar Hall contains 985 (instead of 1000) carved pillars. The hall was built by Ariyanatha Mudaliar in 1569 and blends engineering skill and artistic vision. Each pillar in the hall is a carved monument of the Dravidian sculpture. This makes it one of the most picturesque temples, period. 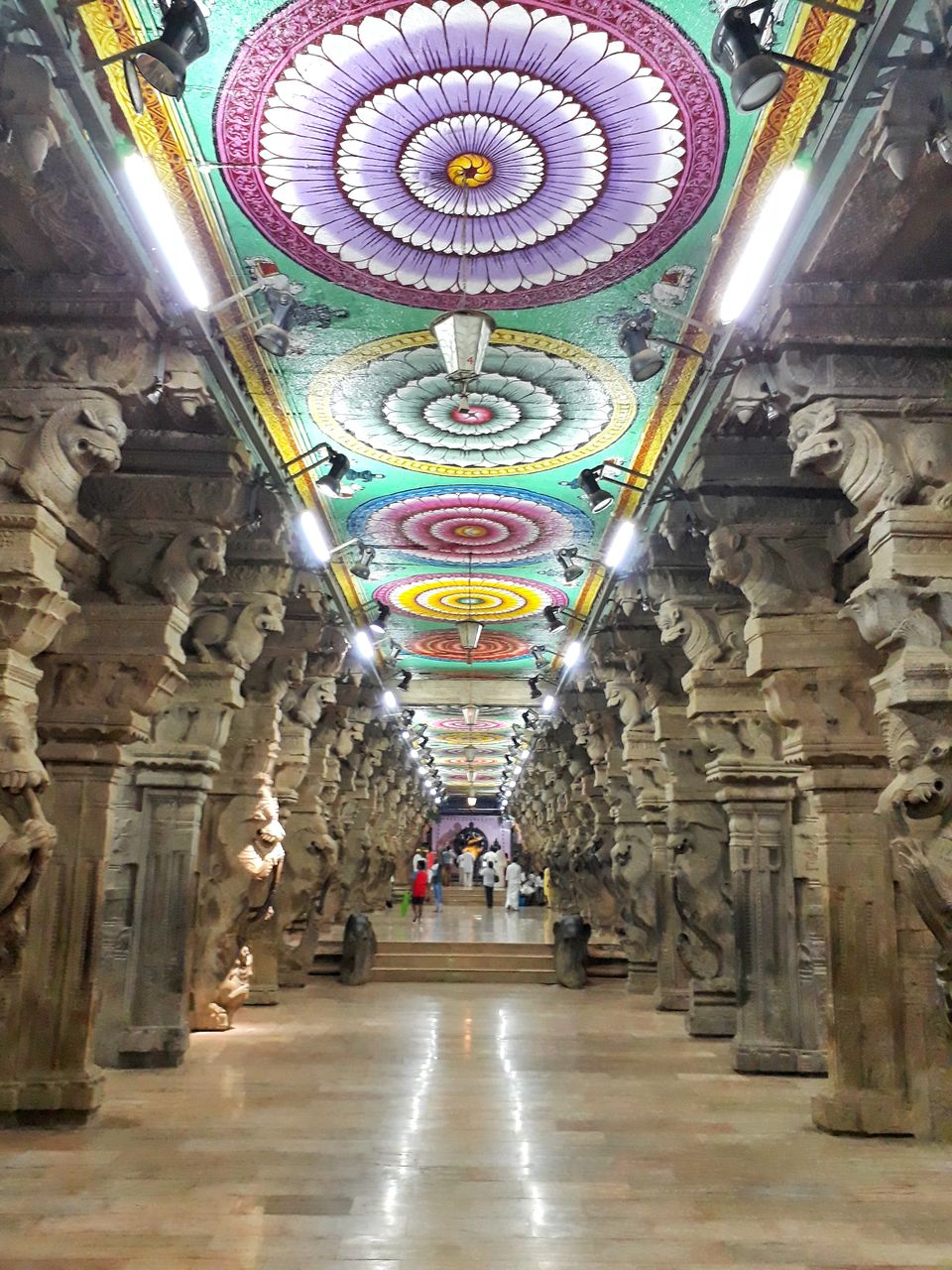 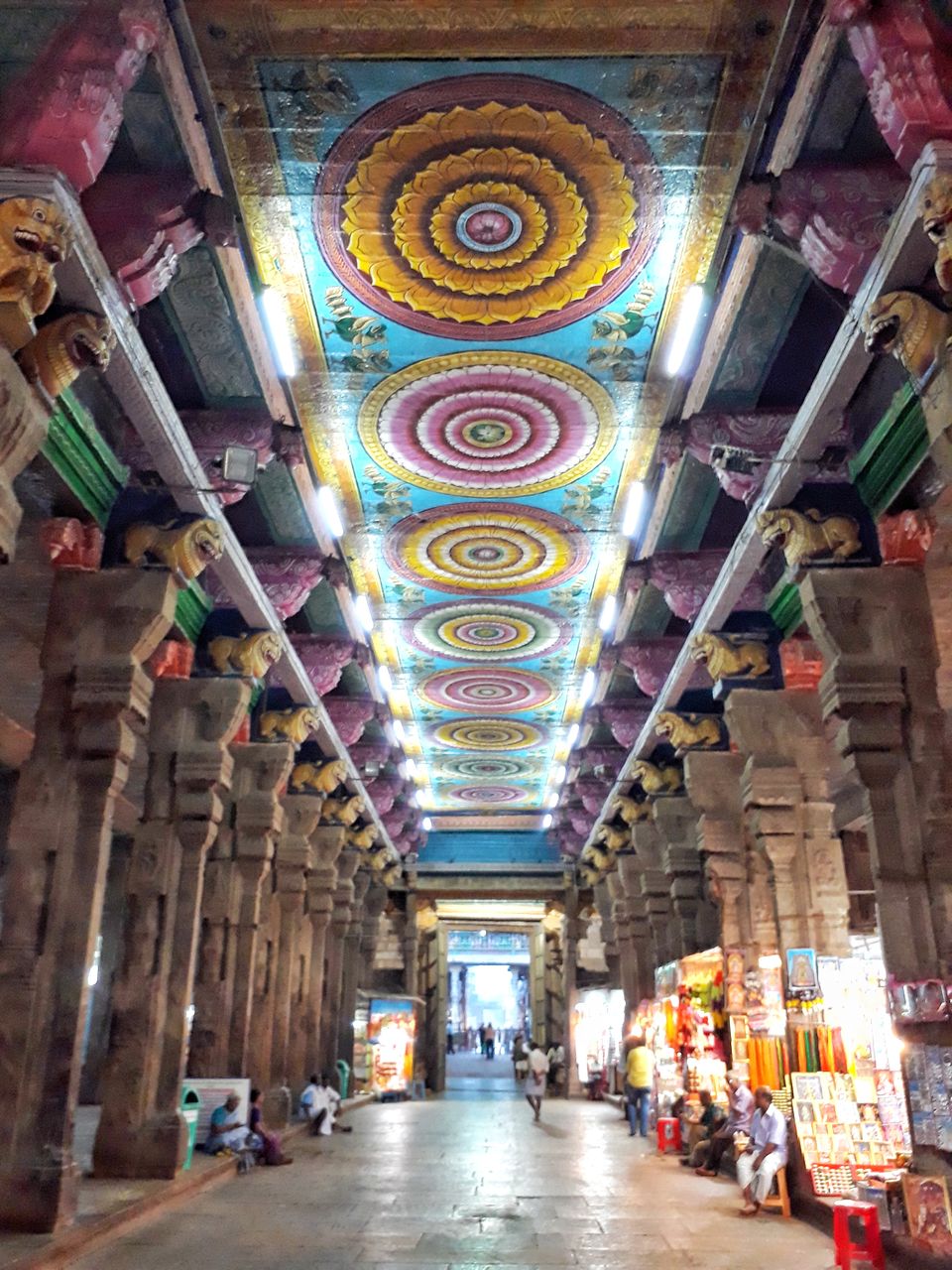 This road trip takes you to some of the most beautiful, picturesque, colorful, splendid attractions that Tamil Nadu has to offer. It is the best of nature and architecture, and history and culture. A truly magnificent journey to the mesmerizing South.