Life is plain and simple and the fact that we complicate it is a completely different topic altogether, which demands copious amounts of time and attention. Dreams on the other hand are quite the opposite of life and hence by nature striped and complex. It is strange to read this phrase I am sure, but even I wouldn't have thought of a description like this. Complex nature of dreams is very understandable, as we do get creative and innovative in our dreams. Until last month when I took a few days off and visited the Bandipur Tiger Reserve, I wouldn't have believed in a striped dream for sure. The big cat is out of the bag, and it is no longer suspense as to why I called dreams as striped. The sight of these striped crusaders and the intense wait to spot them is like no other dream, and when it came true, time stood still and the sound of silence was jarring. 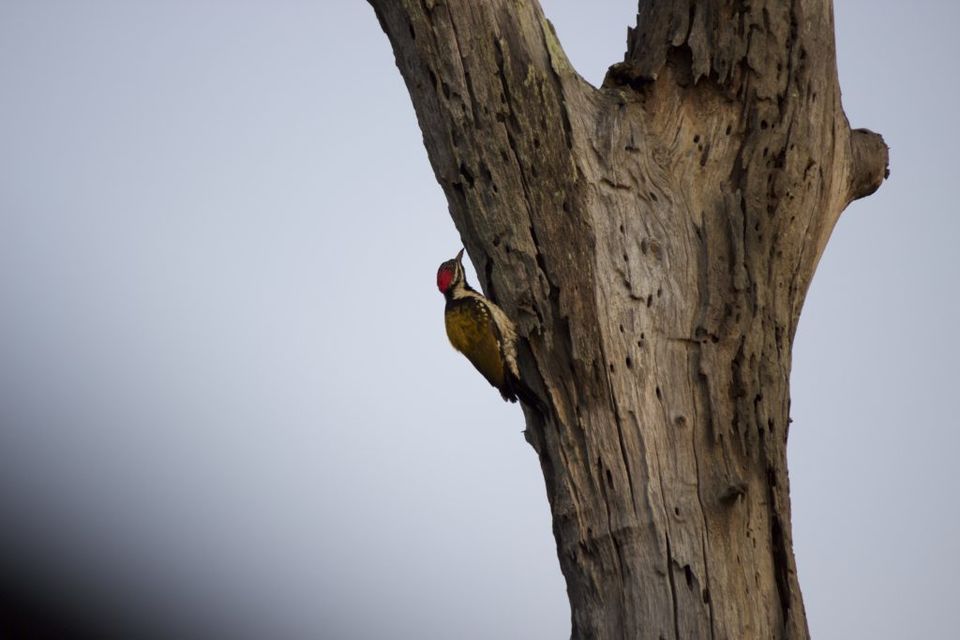 Being just 180 km away from Coimbatore, we decided to make it a road trip through the thick sathyamangala forests. As we drove through these forests and the winding roads, we fell in love with the sight and whistling sounds emanating from all around us. No wonder even the brigand Veerappan chose these forests as his hideout. The route also has a tricky patch of hairpin bends just as we reach the end of territorial Tamil Nadu. It is now that you also start witnessing signboards indicating presence of wildlife in the vicinity. It took us more than 4 hours as we finally arrived at the final destination. 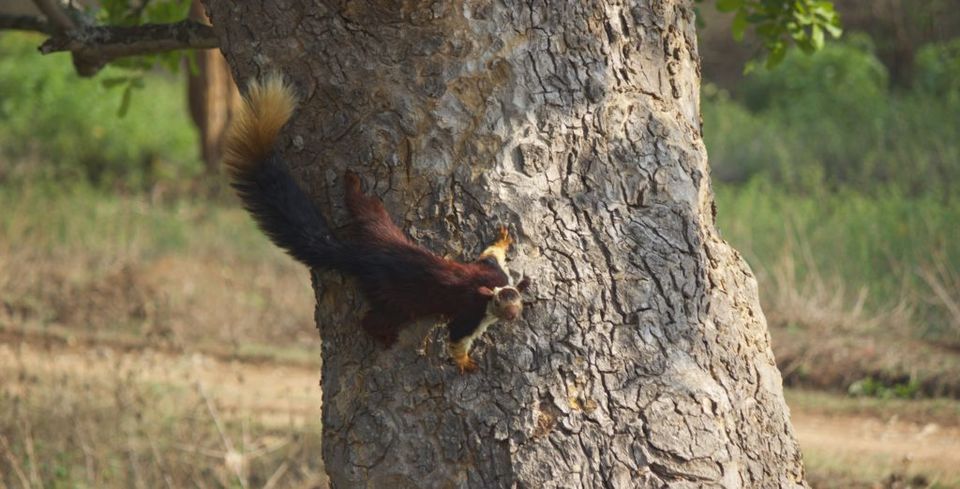 The not so shy, Malabar squirrel.

Jungle lodges and Resort was unique in every sense and space. Every room was named after a member of the animal kingdom with even the room décor carrying the same theme. The schedule was perfectly laid out in front of us, and after a heavy lunch we had to get ready for our first jeep safari. It was around 3:30 PM and with every passing second things got more exciting. It was the very first jungle safari for both of us, yet we were ready with all equipment to spot and capture every interesting moment. The initial 10 minutes of the ride was all about facts and trivia and instructions. We never knew that Bandipur boasts of the second highest tiger population in the country after Jim Corbett National Park. This and all the stories of recent sightings vastly improved our confidence despite completing 30 minutes of our ride with absolutely no wildlife spotted. The vehicles wisely hedge their risks and chances of spotting by traveling in different trails so that if one of these jeeps spot something they immediately radio the information to others. Time was moving and we just could not catch a glimpse of the spotted or striped beings. Every time two vehicles met at an intersection, we could see a horizontal nod and droopy shoulders. In fact we could decode all the non-verbal communication between all the drivers' and we could understand that there was no spotting of the beast yet and this dream of see seeing our national animal was quickly collapsing. 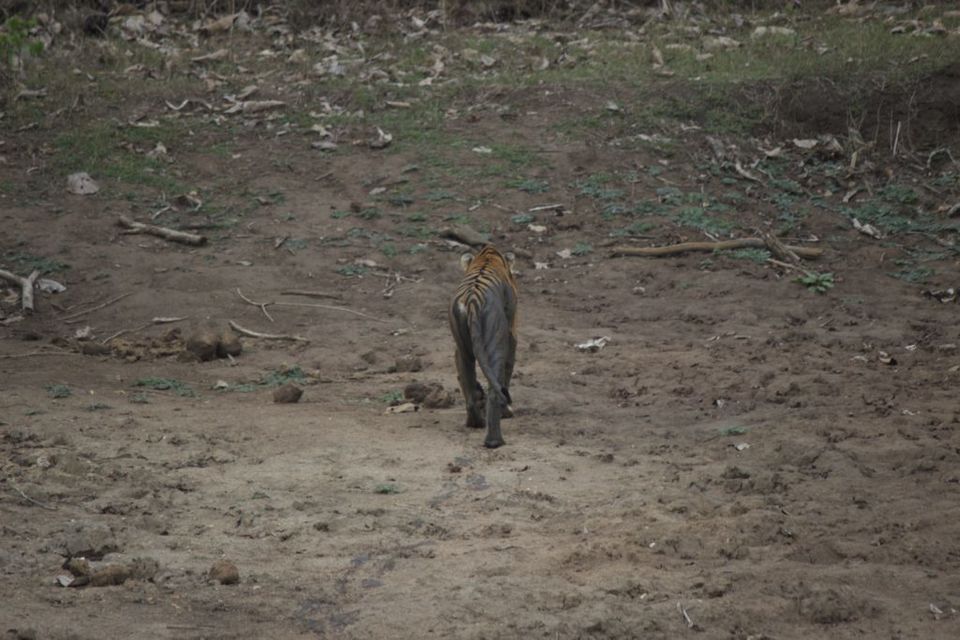 The tigress just walking out of a muddy pond.

Then suddenly out of the blue, or should I say green, our driver and spotting expert made a quick u-turn and from then it was one wild ride like a scene out of a Hollywood chase sequence. A few turns and minutes later the jeep comes to a halt and the driver asked us to look left and keep silence. It was obvious to him, but it took as more than a few seconds to see a moving object covered in mud and heading away from us and a large body of muddy water. It was a thirsty tigress and the moment we spotted her, our eyes were wide open and mouths wide shut. Our binoculars and cameras did all the talking and sign language took over. Amidst the noiseless clamor, we took a brief hiatus to take in the magic of the moment and then all these man-made apparatus were kept aside. The majesty and unmistakable grace of this tigress was keenly observed, as she walked away marked her territory, licked some old wound, turned around to give us a frightening scare and jostled off. We have all heard of this old adage "when it rains, it pours", and sometimes in life we do feel that kind of "proverbial" bliss. As our jeep made a turn and with all of us still relishing the sight of might, we came to a halt near another large water body. Panning our heads we spotted this massive tiger with only his head jutting out. It was surreal, like a scene out of a wildlife documentary except that all the great background narration was missing. The voices in my head were saying 'Can you believe your luck? Stay silent and take this moment in!' For a few minutes we became hunters with our cameras acting like guns shooting images of this majestic beast in its natural habitat. More vehicles from other directions converged to join in as witnesses to this spectacle. 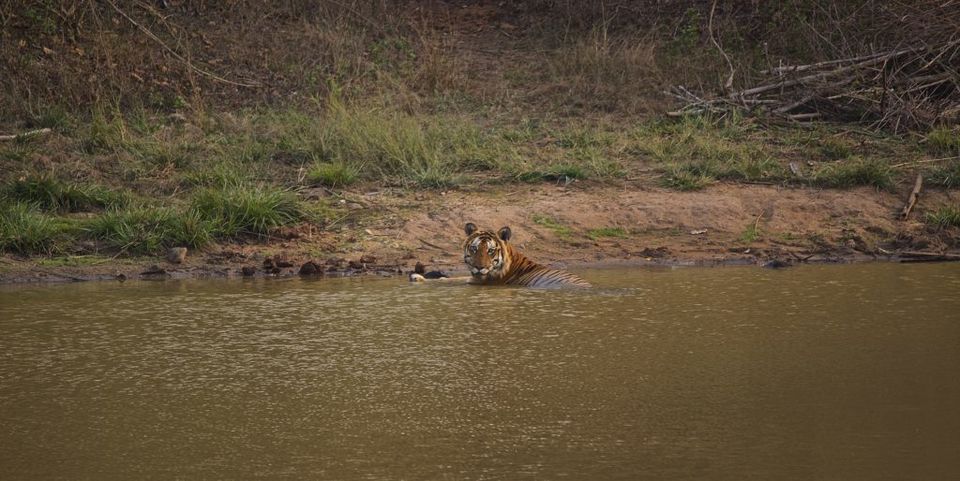 Down here in Bandipur, it is the Tiger's market and he/she sets the price and we just have to pay it without debate or derision. Like that old maxim which says that, it pours when it rains!