The Ghost town of Dhanushkodi! 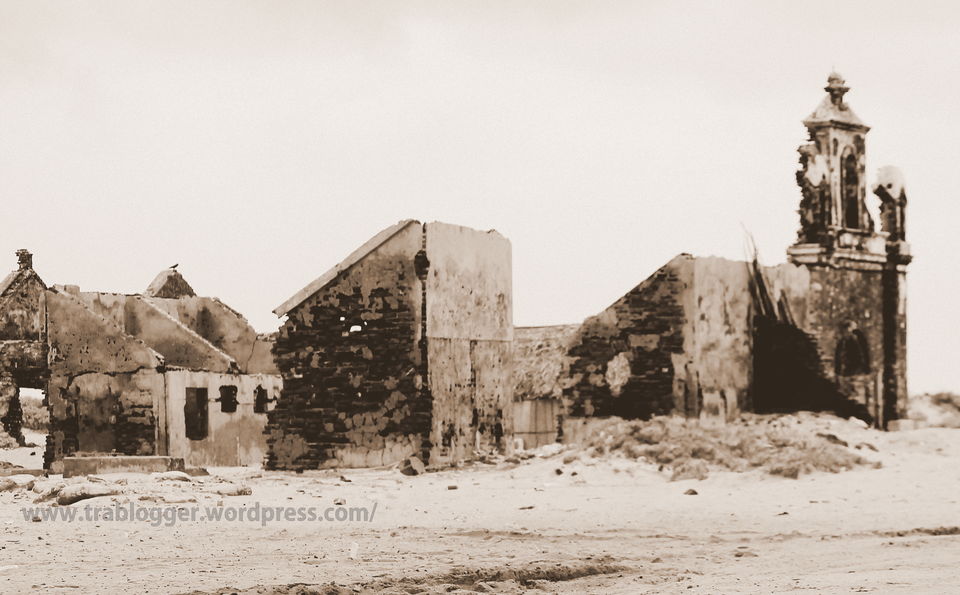 Ever been to a ghost town??

If not, welcome to the Ghost town of Dhanushkodi. Even if you have been there, still you are welcome ???? By the way Ghost town is not a town where ghosts are living nor it is a haunted town! Ghost town simply means that its an abandoned town.

In the year 1964, because of a cyclone, the entire area was destroyed. The Dhanushkodi railway line running from Pamban Station was also destroyed killing hundreds of passengers present in the train. It also destroyed the bridge that was connecting Dhanushkodi with the mainland along with the railway station. The cyclonic storm killed thousands of people living in that village.

Later government declared this place as unfit for living and it became a ghost town. Once this area was filled with fishermen and people who were travelling from India to SriLanka by ships. Now only ruins of the old town can be found. A few fishermen still lives somewhere around this place. 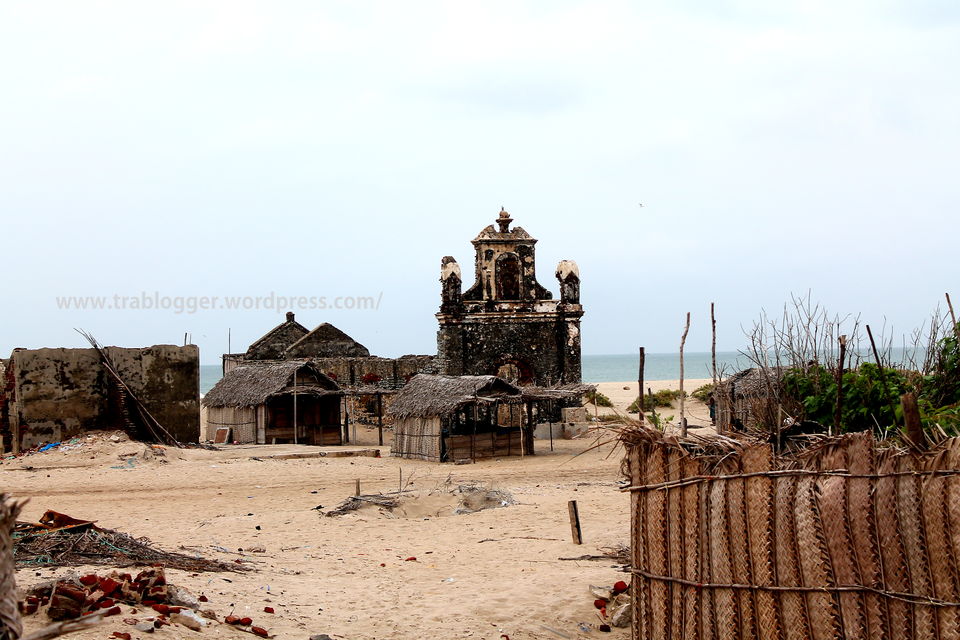 Dhanishkodi is in the Ramanathpuram district of Tamilnadu. The famous pilgrim spot Rameshwaram is 18 km away from here and this is the nearest town. And Sri Lanka is around 30 km from Dhanushkodi!! Earlier there used to be a port with ferry service between Dhanushkodi and Sri Lanka.

The nearest town and railway station is Rameshwaram. Cheapest possible way to get there from long distance will be by trains. Public transport is also sort of cheaper than many other neighbouring states. Nearest airport is Madurai airport, just in case you are wondering. But I am mostly looking forward to have a great trip at the least possible cost. So I am concentrating on that particular point.

As Dhanushkodi is an abandoned town, permission for visitors is only during day. So you will have to stay at Rameshwaram. Anyway you can not leave the place without visiting Rameshwaram and the 1000 pillars. So you can plan one day for Dhanushkodi and the other day for Rameshwaram.

From Rameshwaram, jeeps and auto rickshaws can be hired which will take near Dhanushkodi. Or else wait for the bus, which are not very frequent. Taking a bus is the cheapest option. You can find similar buses from Rameshwaram. 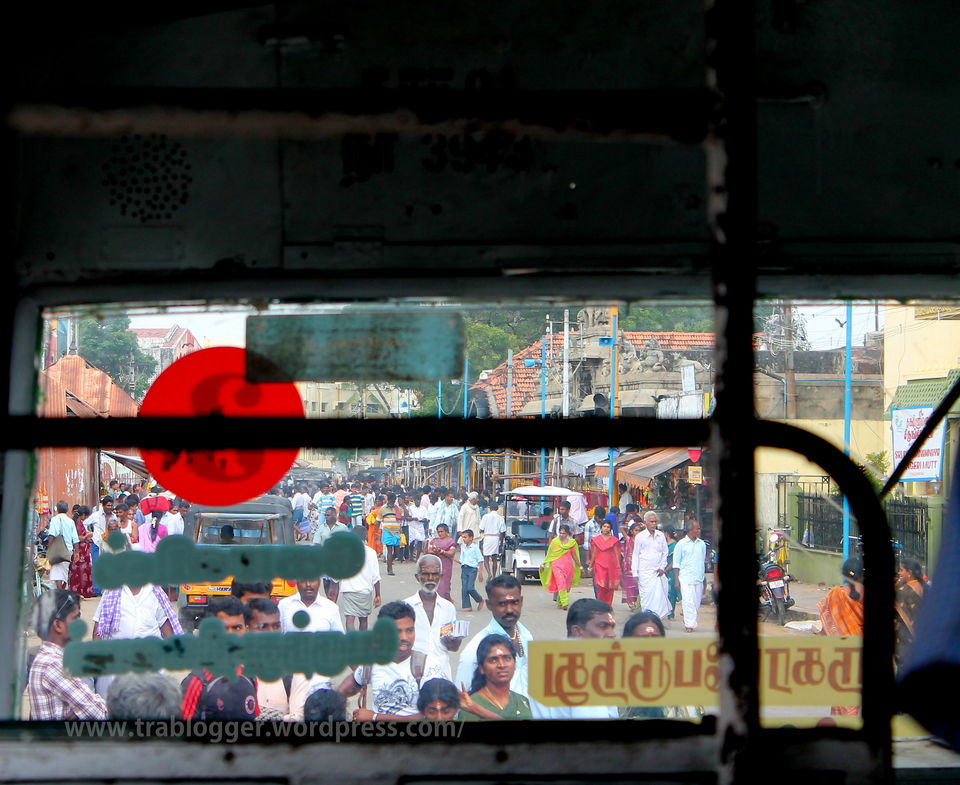 After sometime, beach side shops selling stuffs for tourists will start to appear. That's the sign saying its where you need to get down.

In order to visit the ruins of the town, from here jeeps or other vehicles are to be hired. There will be many mini vans and jeeps, waiting for the tourists. They can charge starting from 100 rupees per person , depending on the number of people. 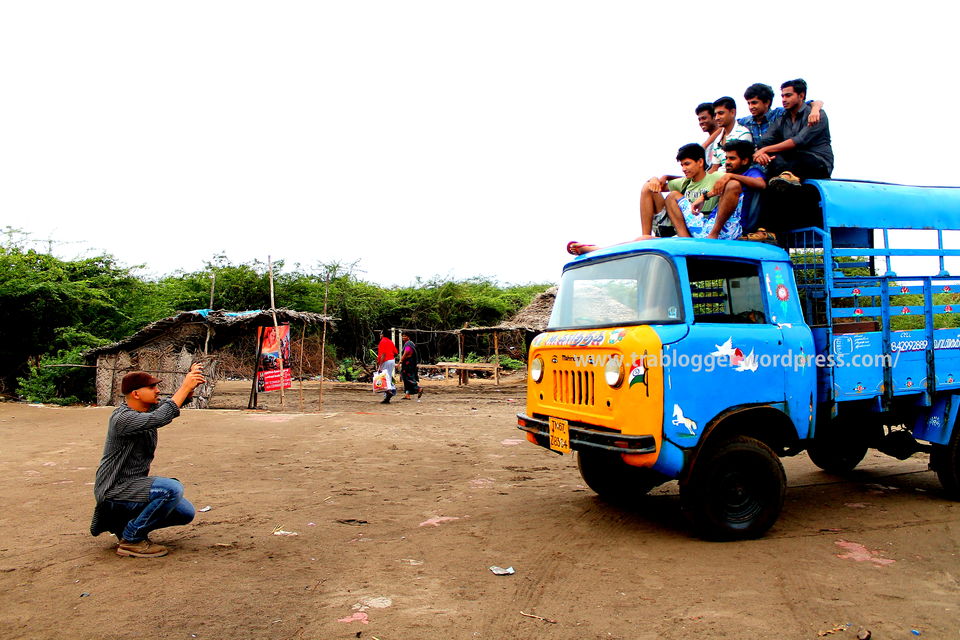 Some of the tourist vans look like this. Don't expect a very comfortable ride, but its going to be a fun ride. These are very special machines. This can run both on land and in water ????

And yes! People do sit on top of the van. If you are looking for more fun, you can always opt the upper berth. Safety is entirely upon your luck. Everyone was lucky that day though.

And you might get to see some jugaad ( innovative fix )engineering. 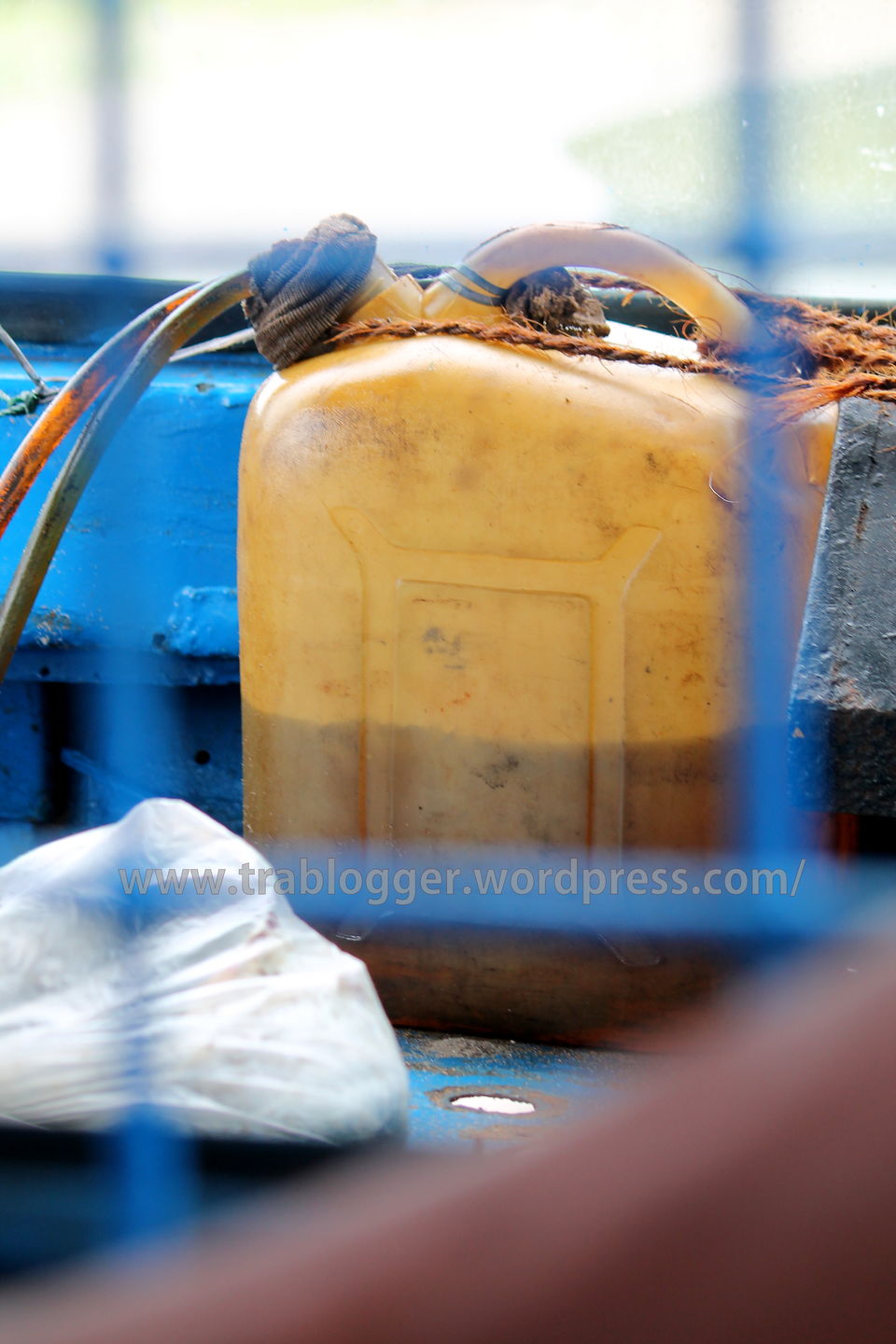 Well this is the diesel tank of our tourist vehicle!! :p

After the eventful fun ride, you can take some cool photos to upload on Tripoto! ;)

At the end van ride, you will be dropped off at point. From here you can roam here and there and later come back to the place to find the van.

The whole place is covered with sand. Houses, places of worship, schools and many other building were there, once upon a time! Now only some ruins and bricks are remaining.

It not just the ruins attracts people's attention to this place. This place has some connection with Indian epic Ramayana. Ramayana says that Lord Rama built a bridge, called Ram Setu or 'Rama's bridge from Dhanushkodi to Sri Lanka. It is also called Adam's bridge according to Muslim legend.

Encyclopædia Britannica says "Adam's Bridge, also called Rama's Bridge, chain of shoals, between the islands of Mannar, near northwestern Sri Lanka, and Rāmeswaram, off the southeastern coast of India. The bridge is 30 miles (48 km) long and separates the Gulf of Mannar (southwest) from the Palk Strait (northeast). Geologic evidence suggests that Adam's Bridge represents a former land connection between India and Sri Lanka. Traditionally, it is said to be the remnant of a huge causeway constructed by Rāma, the hero of the Hindu epic Rāmāyaṇa, to facilitate the passage of his army from India to Ceylon (Sri Lanka) for the rescue of his abducted wife, Sītā. According to Muslim legend, Adam crossed there to Adam's Peak, Ceylon, atop which he stood repentant on one foot for 1,000 years." 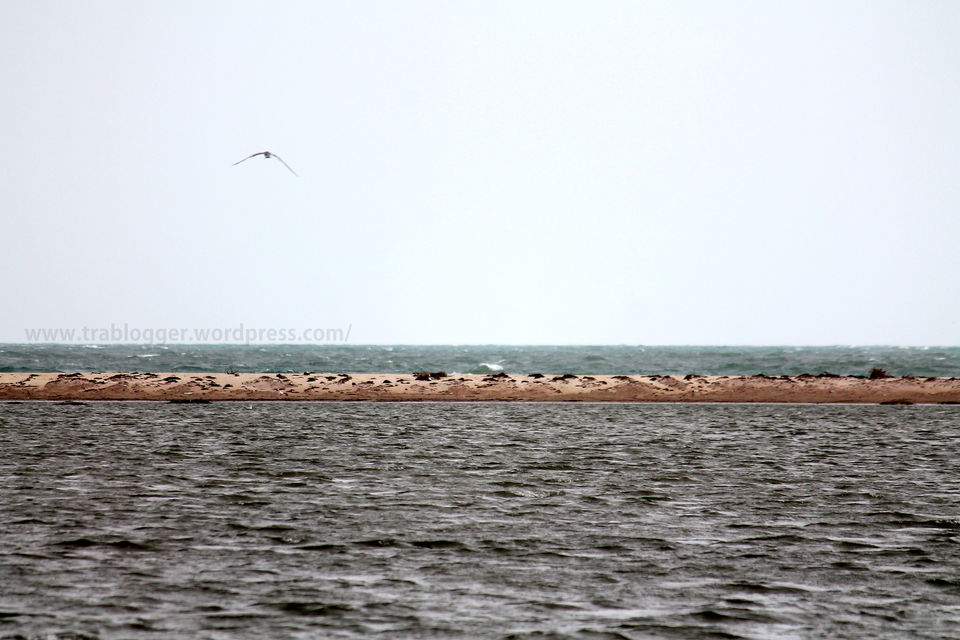 This is what we were talking about. What is left now as the land connection between India and SriLanka!

Sight seeing was almost finished . So went back to the van. Otherwise if somehow we miss the van, then it can be really an adventurous journey!! Everyone advises to return to Rameswaram before sunset as the entire 15 kilometre stretch is regarded as very lonely and scary. Since there is no electricity and means of communication between Rameswaram and Dhanushkodi. Even mobile network is not available. And taxis do not work on the stretch after sundown. So it is not recommended to stay there after dark!

Came back to the place from where we started the van journey. There are some small shops selling stuffs made from sea shells and pebbles. There are mirrors, sea shell curtains and many other things made out of sea shells.

I had some fun with the sea shell decorated mirror.

Mirrors were beautifully decorated with the sea shells. But first let me take a selfie ???? 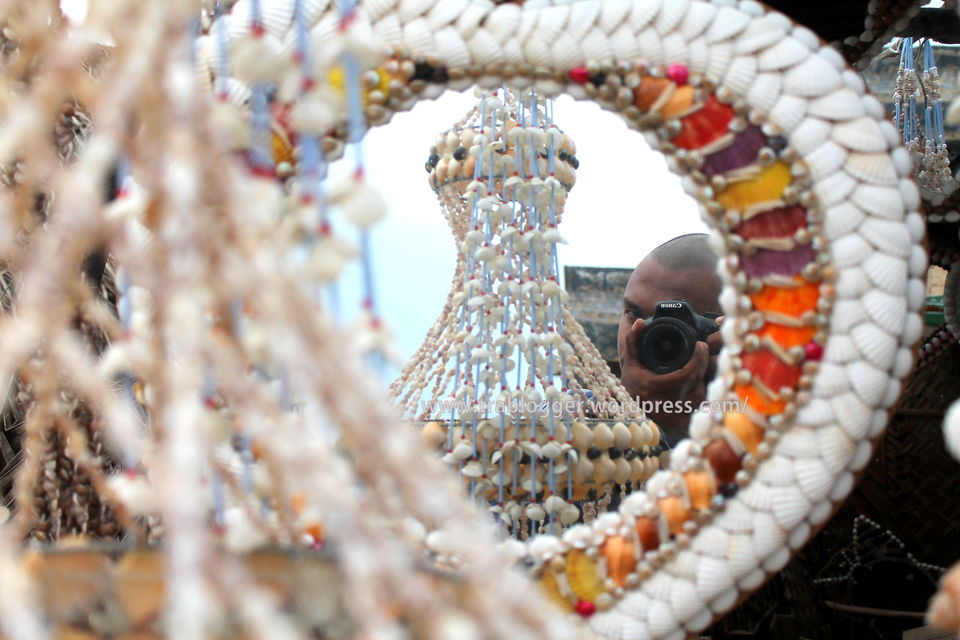 So are you planning to visit the Ghost town?!