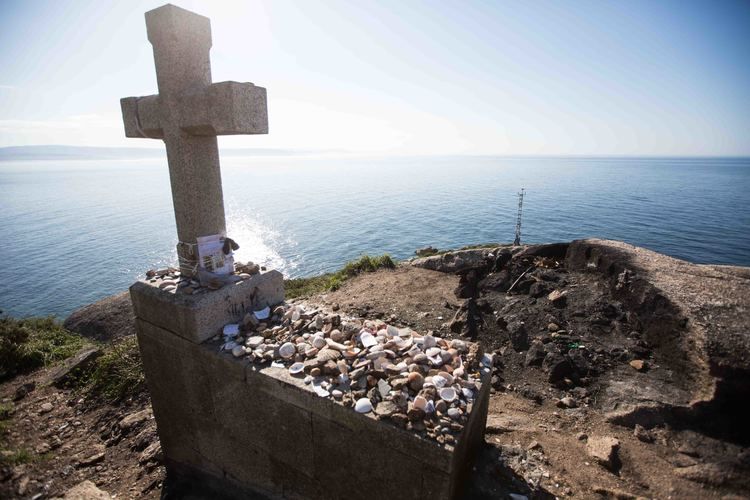 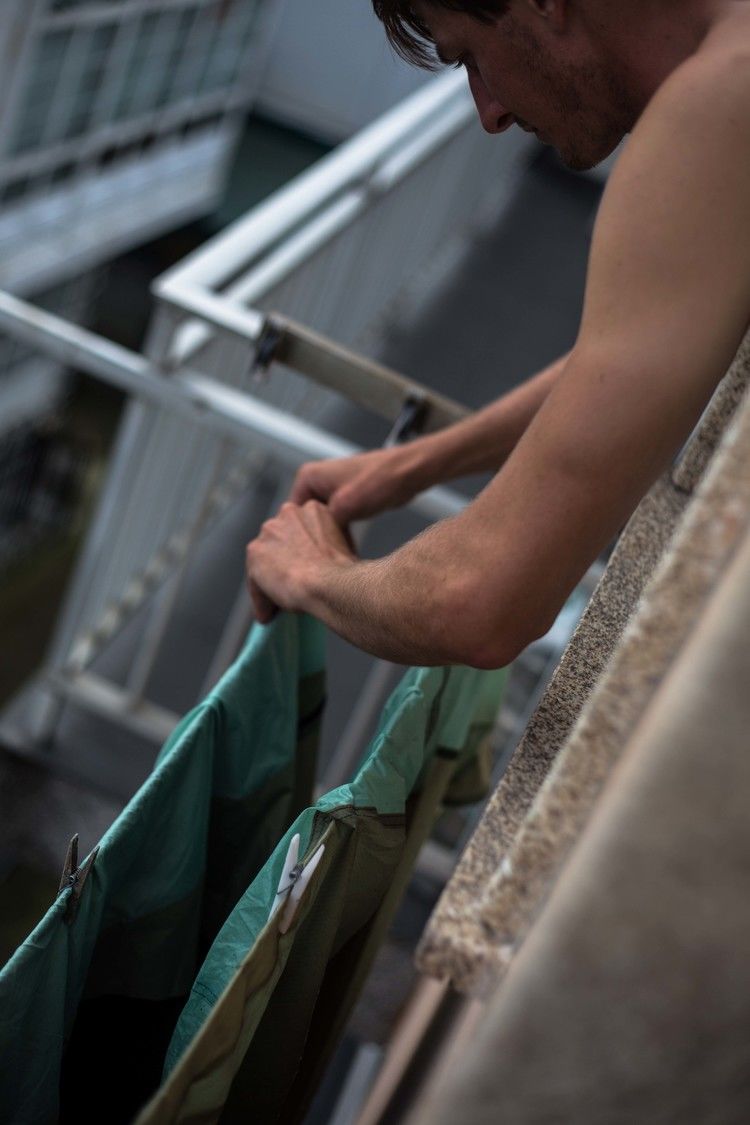 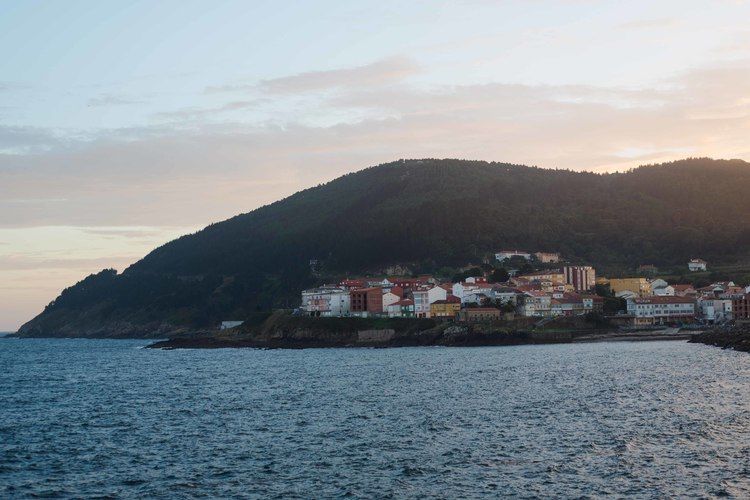 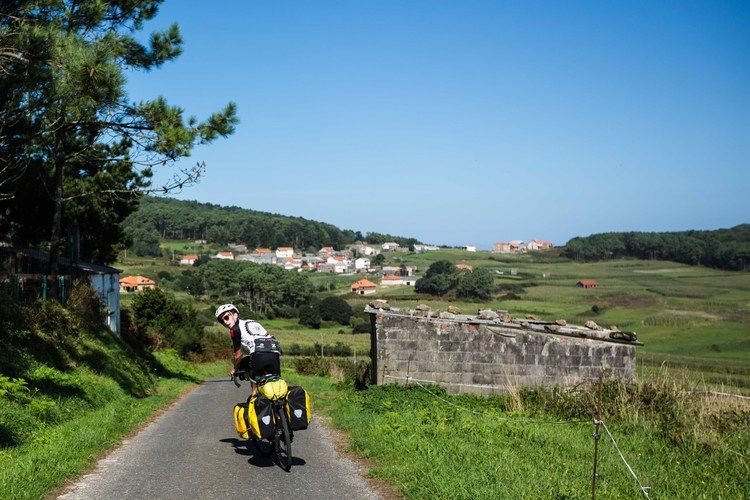 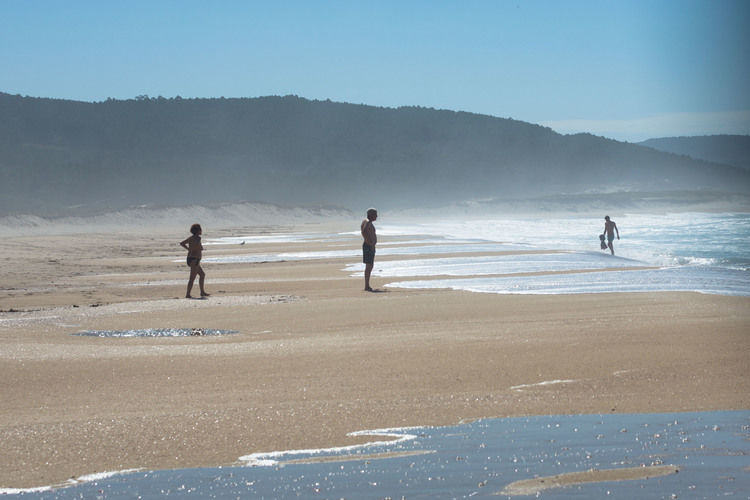 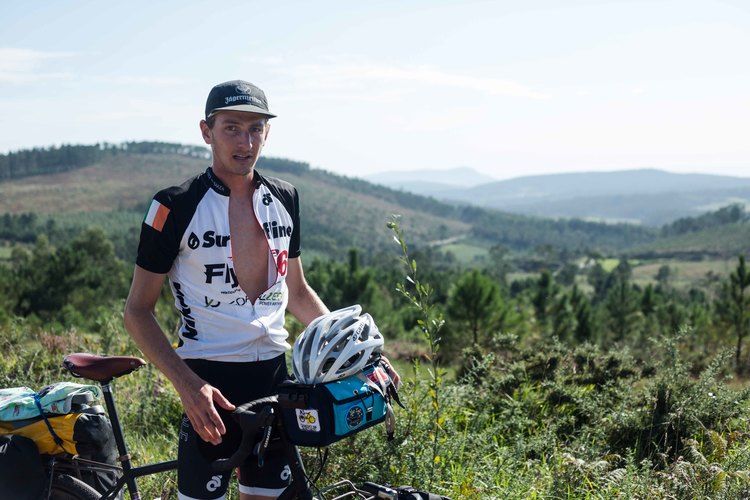 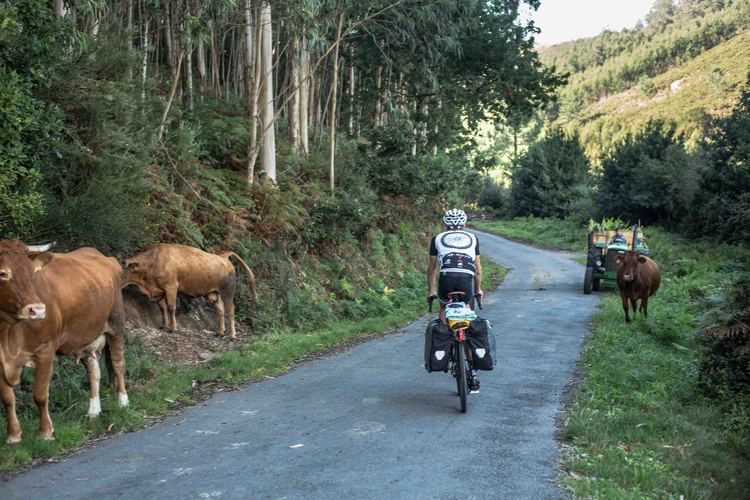 Finisterre, Spain, the most western point in continental Europe, known as the end of the world. We went to bed alarms set for 6:30am, would wake up, make breakfast, pack and hit the road for an early start to the day.

I want to preface this post by saying that AirBnB has been unbelievably amazing. After battling thunderstorms day in and day out, nothing is better than having a place to clean our riding kits (which need it) and regain our sanity and moral after being drenched to the bone for a few days.

8 a.m. rolls along. We crawl out of bed, I make eggs and bacon, Ryan does the dishes. We struggle to finalize the route due to atrocious wifi we had hacked from the hotel across the yard. Our lives get repacked back into our panniers and we hit the road by 11.  Gotta love how a real bed, blankets, and the sound of waves hitting the harbor jetty can change your plans.

After biking to the lighthouse at the end of the world, we had to do a 180 to get back on course for the day. The end of the world is the last destination for pilgrims traveling along the Camino de Santiago, who leave burn their clothes to signify the end of their long journey. The minute we regain our path, the GPS reroutes us from our planned route and we are left to guess which road would take us out to the coast.  Meandering our way through chicken coops and barking dogs we make it to a fork in the road separating an alley and pine forest.  unaware of the right road to road, we had an idea of our direction, so we opted for the road leading through the pine forest.

Coming out of the forest Big Blue appeared on the horizon and what we saw around us was straight out of a movie. Neither writing nor photos can do it justice. The valley we had just stumbled across was full of farms, the land green from the previous few days of rain. The air smelled of a mixture of salt, pine, and manure. Chickens cooed, cows mooed, old farmers yelled “Buenos Dias” as we rode by.

Approaching the sea cliffs, a salty mist moistened our sweaty faces. Everything was green, the ocean sheet glass, the people friendly and welcoming. We were on the Costa da Morte (coast of death), yet everything was so full of life.

We eventually came across some more yellow arrows and once again put our faith in them to lead us to our destination, Muxía. The wave gods were looking out for us and the yellow arrows lead us straight to a perfect beach break.

We struggled to roll our bikes through the sand. Just looking at the waves in front of me got my adrenaline flowing. Out of my kit and into my AMBSN boardies, grabbed my fins, my Enjoy hand plane and made my way to the water's edge. I stood there. Legs sore from riding, my body telling 100 meter swim through the current was going to be to much. But after seeing wave after wave barrel down the beach I was out there.

Making it out to where the waves were breaking was a challenge. My legs were cramping, the waves seemed to come one after another and all I could do was keep swimming until finally a lull.

I made it out past the break and looked back at the coast for the first time. It reminded me of surfing in Santa Cruz up HWY 1 and being out in a lineup of perfect waves and having a backdrop of untamed wilderness. From sheer cliffs to distant farms my view from the water will be forever ingrained in my head.

I caught my breath, and waited. A wave swung wide I passed. I was being picky after busting my ass to make it out there. Another set came though and none were up to my standards. Finally as I began to shiver, a wave popped up out of nowhere. It began to bowl up. I turned and began swimming down the face of the wave. I rolled onto my side, gaining speed as the wave began to fold over itself. It threw over the top of me and there I was inside the barrel looking out at the wild landscape of the Infamous Costa da Morte wondering how this all came about. This was now the second time on the trip were we had unexpectedly found perfect waves with not another soul out in the water. The hand plane and fins are definitely proving that they are worth the little bit of extra weight.

After a quick lunch of chorizo and bread we got back into our kits and set off to our campsite at Playa Leis near the town of Muxía.

Again following the Camino route we ground our gears up mountains on small trails that should be ridden on mountain bikes. We took switchbacks through valleys and back roads through farms and vineyards, hoping Big Blue would show his face around every corner indicating that we were getting close. After playing pinball will small boulders down the final dirt trail we hit the road that would lead us into Muxía.

We did complain a little bit about the rain, the wind, and the mud, so I guess we should be ecstatic when the sun is melting us through steep dirt trails.
After looking at the map and seeing that our campsite was only another 10 km away, we decided it was time for a beer. This is the part of the trip were we discovered that drinking a beer before the end of a days ride is like emptying all of the gas in your car and expecting it to start. The last 10 kilometers were some of the hardest of the trip. We were on the brink of "bonking" and it took every ounce of energy we had left to turnover each pedal to make it up the last few hills.

We passed two campsites on our way to Playa Leis. Our bodies told us to stop and settle for the, but we knew we had to stick it out and make it to our planned destination.

Rounding the final bend up the side of hill covered in eucalyptus and pine trees we found our little oasis of a campsite. We had achieved what we had set out to do. We pushed through the pain and successfully completed one of the most tiring rides of the trip. And to top if off our campsite was atop a hill overlooking the bay, with the last bit of sunshine peering through the trees.

It is days like this that I had prayed to happen before this trip, and day after day we continue to experience them. Our bodies and minds getting stronger everyday, and the rewards of pushing through the pain keep on getting better and better. Spain is a special place.

This trip was originally published on Salty Spokes.