The Best Places to Visit in the Philippines 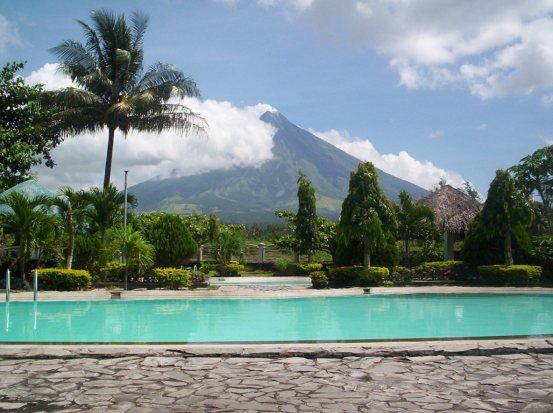 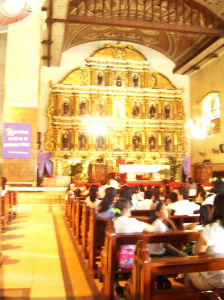 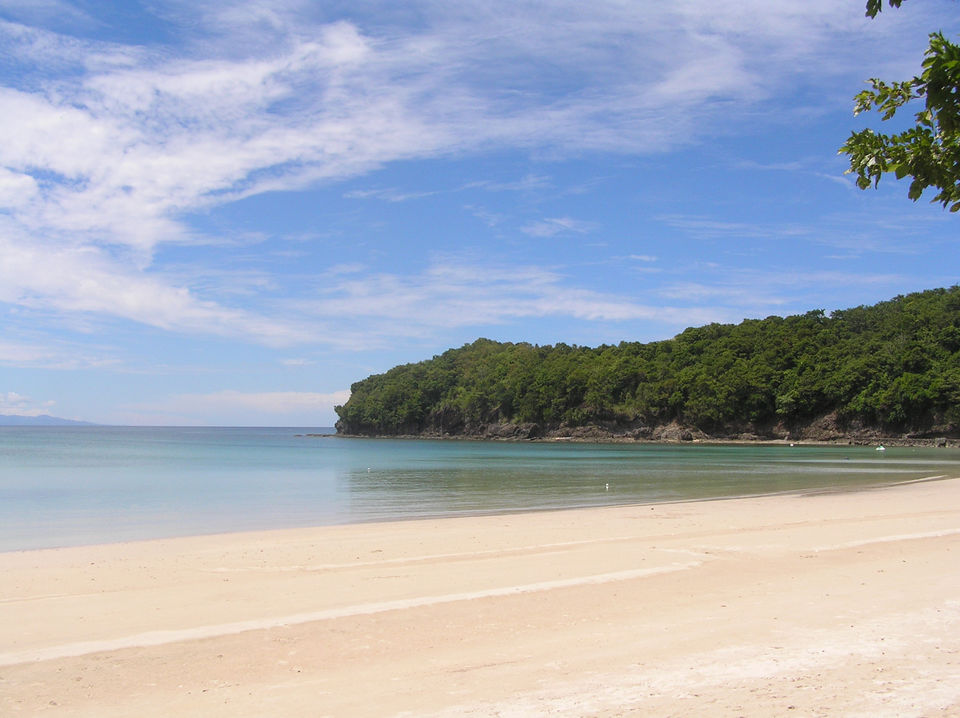 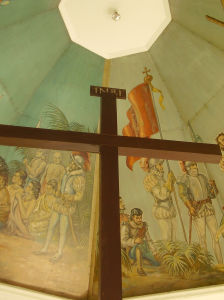 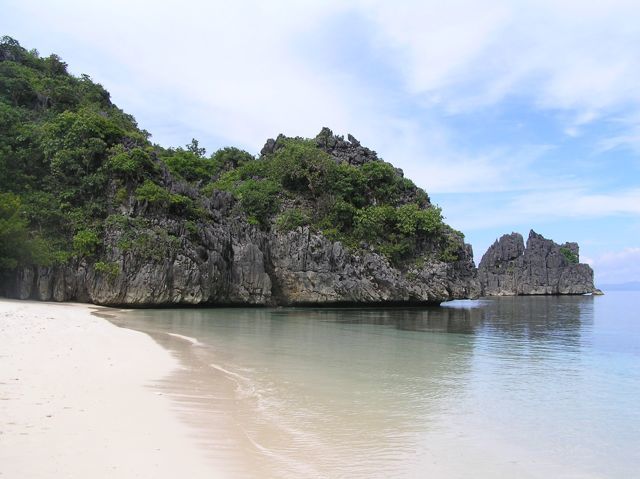 I live in Philippines and it remains my favorite place to travel. So, are you planning for that vacation which you haven’t taken for years? Or, are you looking for an affordable, yet romantic place for your honeymoon? Or, do you suddenly have that urge to travel and explore the world a bit? You take out a map to find a place where you can spend any of these. Don’t you get curious about that interesting group of islands in the Southeast Asia region called the Philippines? It’s not a familiar destination for tourists. Probably, that’s one reason for you to head off to this tropical country. Not only will you enjoy more than the usual sights you find in travel magazines, but you’ll be surprised by the various tourist spots the Philippines has in store for you. And there’s an added bonus: English is widely spoken all over the archipelago, which makes communicating with the locals a lot easier.

Start your journey with Puerto Princesa, one of the major attractions of the island. Puerto Princesa is the greenest city in Philippines. It will get you close to the nature and the beauty of the islands. The main attraction here is the Underground river, Puerto Princesa Subterranean River (or Underground River). Listed in UNESCO's heritage sites, this is the longest navigable underground river in the world. Cruise along this route for an exceptonal experience. This place also has a number of unexplored beaches that you can enjoy without worrying about the crowd.

The Philippines is known for its rich marine life. Colorful and oddly-shaped corals and fishes will make you wonder why such beauty is kept underwater. You can go diving or snorkeling at Tubattaha Reef or Coron in Palawan, the Apo Island in Negros Oriental, and Anilao in Batangas.For a bit of adventure, you can get up close with whale sharks, swimming in their natural habitat. On the other hand, if you are afraid to go underwater, you can opt to stay on the boat and do some dolphin watching.

Next stop would be Cebu, the oldest city in the Philippines. I remember my first visit in Cebu when I was 10 years old. My mother studied in the University of San Carlos, one of the oldest schools, in Cebu. We went to many famous landmarks which I still visit whenever I go to Cebu, taking friends and other tourists with us. A must-see in Cebu is the Magellan’s Cross, the one erected by the Spaniards during their arrival. Magellan’s Cross is called as such because it is the original wooden cross that Portuguese navigator Ferdinand Magellan planted when he arrived in Cebu. At present, the cross is housed in a small octagonal shaped structure. It has wide windows that let light shine through. The ceiling has a narrative painting of that fateful day when Magellan, along with Spanish soldiers, planted the cross on that same spot.

Beside the cross is the Sto. Nino cathedral, which houses the old relic of Santo Nino, said to be the original statue given by the Spaniards to the Cebuana queen. Ever heard the story how the figure of the Holy Child Jesus, or Santo Niño, found its way in the Philippine shores? It was said that the figure was given as a gift to the wife of the local chieftain. Then when a fire struck, it was said that the figure was found unburnt and still intact, a miracle that was instrumental in the conversion of the local tribes into Christianity.

From Cebu take a trip to Albay in a plane via Naga city or Legazpi City. Ships also ply from one port to another but take much longer.

While passing through Legazpi City, you can drop by to the nearby town of Sto. Domingo. Sto. Domingo is a great place to have fun and relax. Everything seems to be a walking distance and we didn’t mind the stroll because the narrow alleys are well paved and the air is just so refreshing. We stayed at Puerto Vista Suites that has complete amenities like air conditioned rooms, a hot shower, restaurant, billiards table and even picnic huts at the rooftop. In front of the resort is the port which made it convenient for us to take the boat early in the morning for the island hopping.

From there head straight to Albay. Being a peninsula and boasting of one of the wonders of the world, Albay is known for its numerous natural treasures like waterfalls, caves, natural springs, beaches and marine life. The town of Malinao, Albay has the Vera Falls and the Palale Falls which are both used for ecotourism. The local cuisines are delectable given that this is the only region in the country known for its spicy food, something that it shares with other Asian cuisines.

A must see in Albay are the Cagsawa Ruins. A church and convent used to rise at Cagsawa. But with the major eruption of Mayon in 1814, the church was buried beneath the hot lava. The local people of Cagsawa took refuge at the church but they later perished when the church was engulfed by lava. Many lives were lost. But their memory lives on. Photos of the eruption are sold at the ruins.

There are 7,107 islands in the Philippines and that's why it is more fun to be in this part of the world than anywhere else. It’s a lot more fun for a first-time traveler to see the wonders the Philippines has in store for its visitors.

HotelsMap
This place is best known for its famous underground river. The 8.2-kilometer river, said to be the longest navigable underground river in the world, winds its way underneath a mountain range, through the St. Paul Underground River Cave, and then goes out into the South China Sea. The journey through the cave system alone is 24 kilometers long. It is listed on one of the new natural wonders of the world. 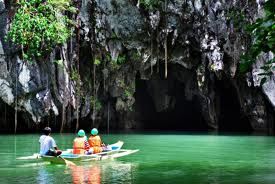 HotelsMap
When you are on an island, diving underwater is your first instinct. Especially if there are beautiful corals underneath. Listed on UNESCO's heritage site list, this natural park comprises of some great underwater species and colorful corals. The reef expands to 181 km and is a major spot for marine biodiversity. Green Sea Turtles, Sharks, Dolphins and 360 coral species are some common sightings in these seas. So dive in ! 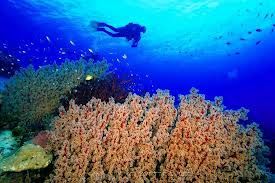 HotelsMap
Cebu is the oldest city in the Philippines. Apart from its rich and colorful history, Cebu is known for so many things — the guitars, the food, the churches, the Taoist temple, the nightlife, and a lot more. Getting to Cebu is very easy because of the numerous flights from Manila and other Philippine and international airports. Cebu has an international airport so it’s easy to get to this place. It also has ports where passenger vessels bring people to and from any part of the archipelago. 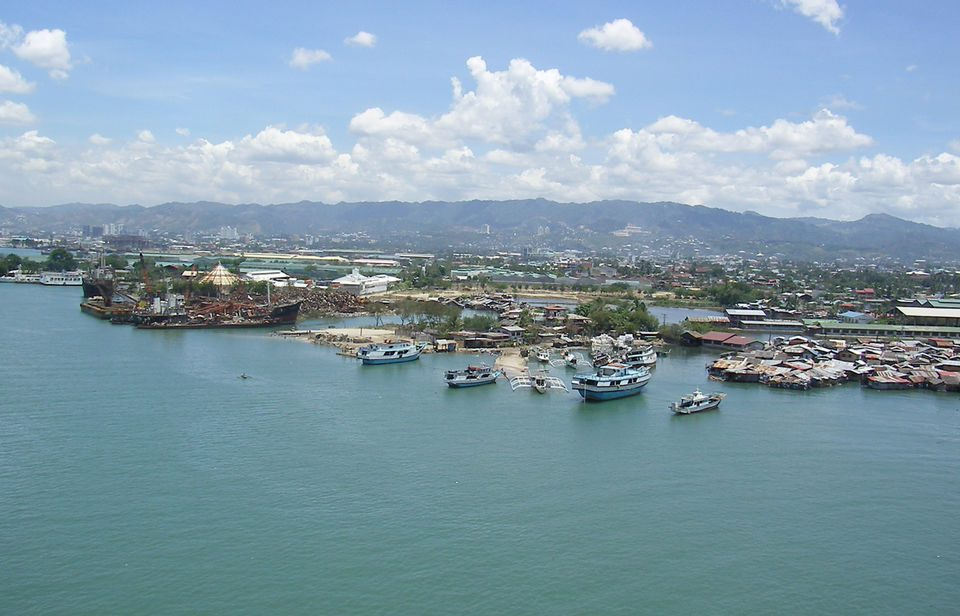 HotelsMap
A must-see in Cebu is the Magellan’s Cross, the one erected by the Spaniards during their arrival. Magellan’s Cross is called as such because it is the original wooden cross that Portuguese navigator Ferdinand Magellan planted when he arrived in Cebu. Because of the effects of time, weather and other external factors, it could not be avoided that the wooden cross would be subject to wear and tear. To preserve this historic landmark, the original cross was cast with wooden planks.This landmark is relevant to the Filipinos because it signified the locals’ conversion to Christianity. Because of the arrival of the Spaniards, the Philippines has become a significant mover in the Christian faith. In fact, the country remains to be the only Catholic nation in Asia. 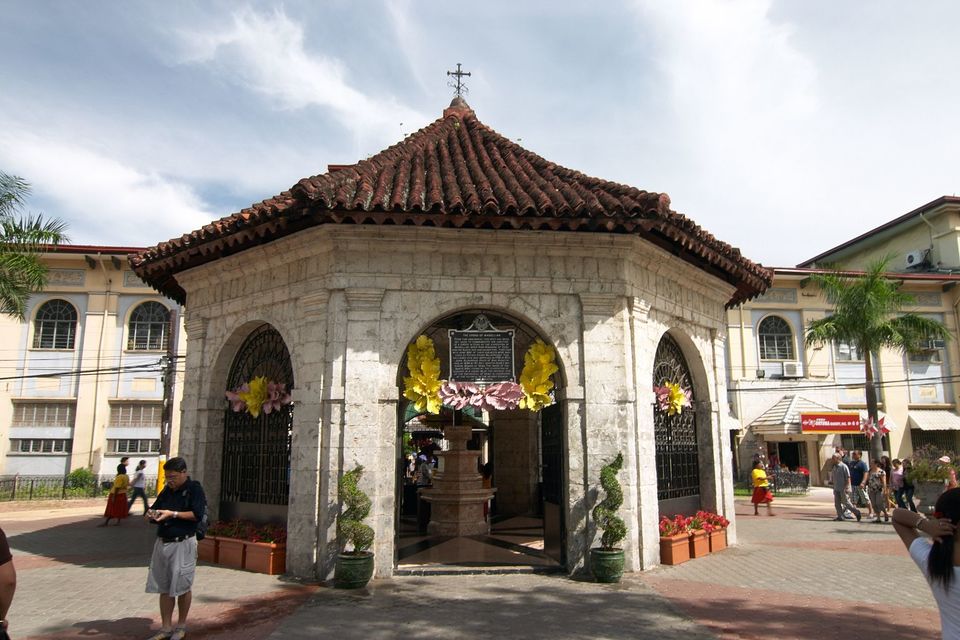 HotelsMap
The old Sto. Nino cathedral, which houses the old relic of Santo Nino, said to be the original statue given by the Spaniards to the Cebuana queen. Locals and believers from other towns, islands and countries flock to the Cathedral to visit the Sto, Niño which is also a miraculous one. During its feast day, usually celebrated with a Sinulog Festival every first month of the year, people would paint themselves black to symbolize the early Filipino aborigines, known as Negritos or Aetas. A figure of the child Jesus is paraded in the main streets of Cebu hyped with some street dancing. 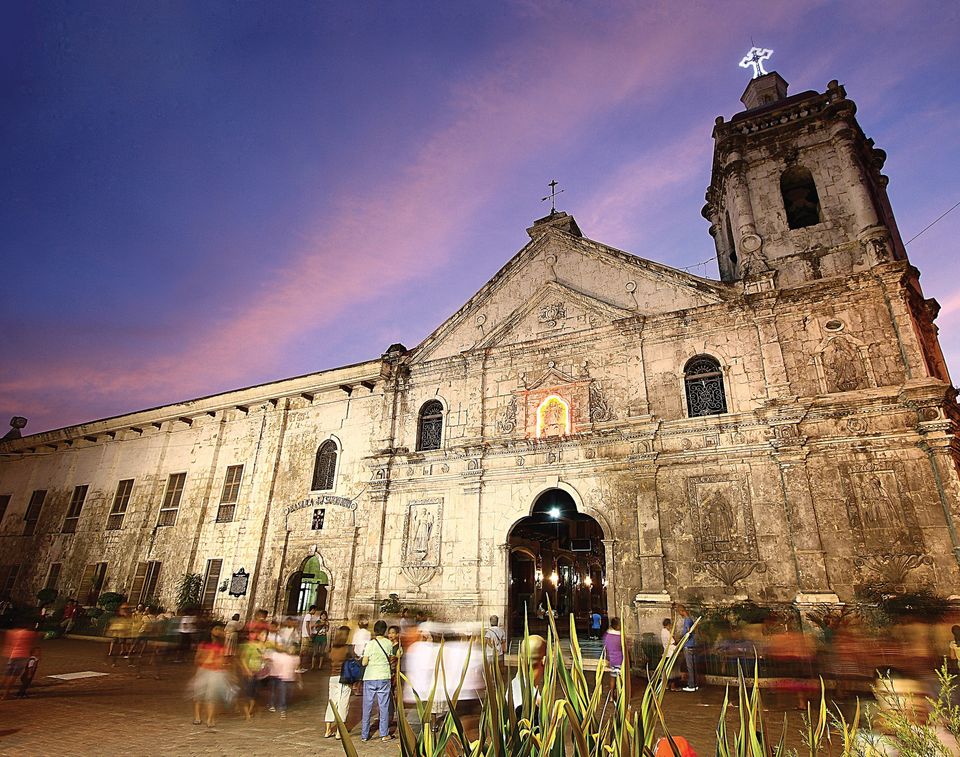 HotelsMap
Sto. Domingo is a town in Albay named after its patron Saint Dominic of Guzman. This scenic town is known for its black sand beaches and the grandeur of the view of the Albay Gulf. Although Sto. Domingo is only a small town, it is a place that has been wonderfully planned. The Cathedral sits at the heart of the town and surrounding it are the public market, the public plaza and the school. 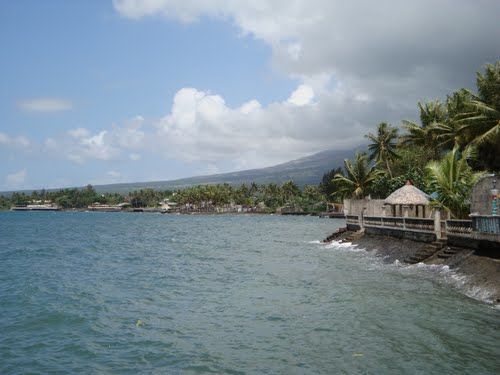 HotelsMap
Albay is not a usual tourist destination. Located at the Bicol peninsula, about 460 km or 287 miles south of capital Manila, there are so many things that remain undiscovered in Albay. Albay came from the word Albaybay which meant “by the bay”. The first thing people picture when in Albay is the cone-shaped Mayon volcano which remains to be a beauty whether it’s in its active or dormant mode. 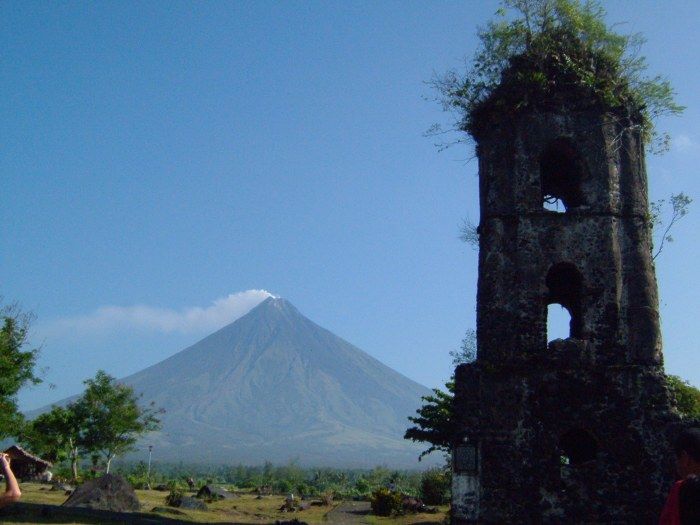 HotelsMap
Cagsawa Ruins today is reminiscent of a church that once gave refuge to people from the wrath of the Mayon Volcano. To date, only the church bell tower was left which now becomes a popular foreground in many Mayon pictures. Tourists now flock at the ruins to personally view the majestic Mayon and Cagsawa. Large rocks are also scattered at Cagsawa. They are evidence of the fury that Mayon once displayed. The National Museum there preserves the life of people before the Mayon eruption in the 19th century. 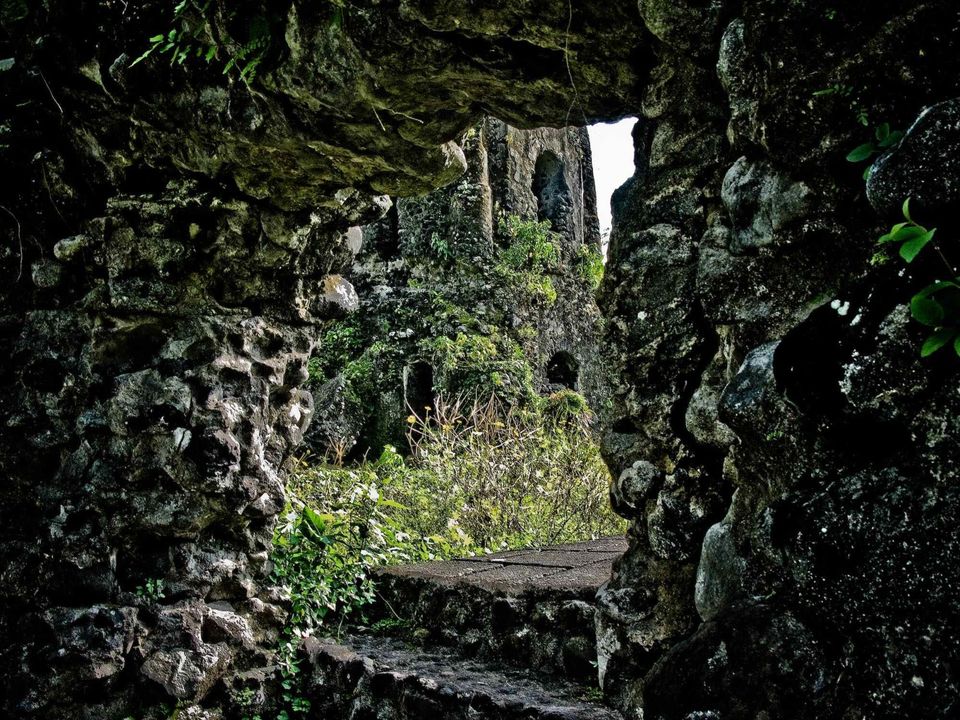 HotelsMap
If you are the type who wants some time alone for yourself, you can take a long trip to Caramoan in Camarines Sur. Caramoan became famous when the French franchise of the Survivor TV series filmed one of its seasons here. Despite its shot to fame, life in this town is still laid-back and slow. 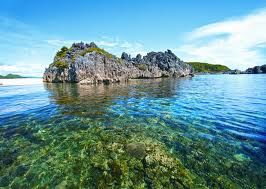 HotelsMap
Dapitan is known to be the place of exile of the Filipino national hero, Dr. Jose Rizal. There’s no debate why he chose this serene city. There are beautiful beaches, with Dakak as the most famous private resort located in the area. It has a cove that provides a bit of privacy and various amenities to keep guests entertained and relaxed. 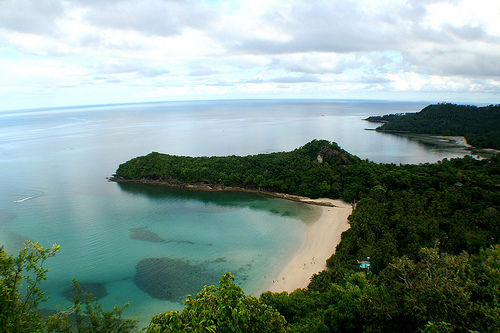