By My Travel Slate 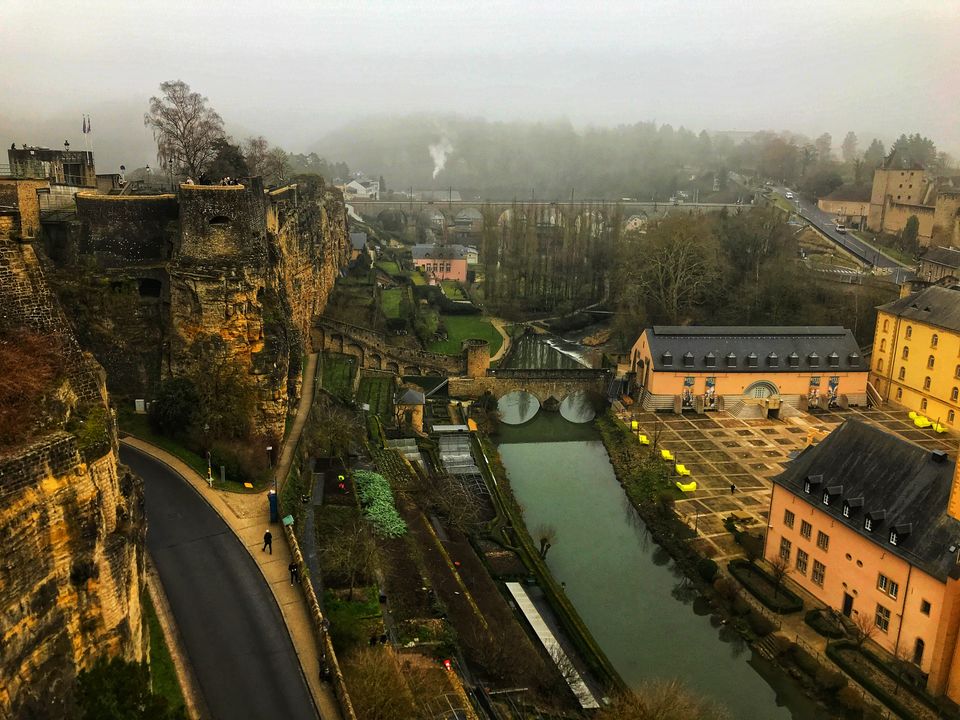 Check my other blog to learn few things about Luxembourg prior planning a day trip.

Plan a trip to the second richest country in the world

I took the morning train from Metz Gare(France) and arrived in Luxembourg city central station at 10:22 am after an hour ride. I passed the journey time by gazing at the green valleys through the window and awaited to start my self guided walking tour to explore the city in a new country.

The central train station is the primary station of Luxembourg city, which is well connected with all major European cities. It has approximately 14 platforms and an information centre near the entrance /exit of the station.

Tip:- If you take the stairs down just before the entrance/exit gate, you will find the toilet and in order to use the toilet, 70 cents needs to be paid.

The station is also equipped with few waiting rooms facility for the passengers. I spotted two cafes in the station to have a quick bite and coffee. Location wise, the station is right in middle of the modern city centre, so once you come out of it and walk in any direction, you will see a ton of shops.

This is like an any typical modern city centre where you will find the shops, cafes and corporate offices. However, once you enter the other end of the city which comprises of the ruins of old fortifications, you will have the pleasure of visiting this country.

So I started my journey of seeing the 10 attractions in the city primarily near the old town region. Though my list had few more places to visit, but I could visit them, as it was freezing cold on that day with foggy weather. Temperature remained one degree through out the day. Well, as I left few places, it would give me a chance to visiting them in future.

I started my voyage by navigating the google maps and saw these ruins of stone houses and fortresses at the lower level from a pedestrian & Motorway bridge known as Luxembourg Parallsale. This contrasting sight was pretty surprising for me; as such ruins from olden times we generally find in the outskirts of a city. However, in Luxembourg city, the urban city centre is built around these old wreckage of fortresses and casemates without harming them. 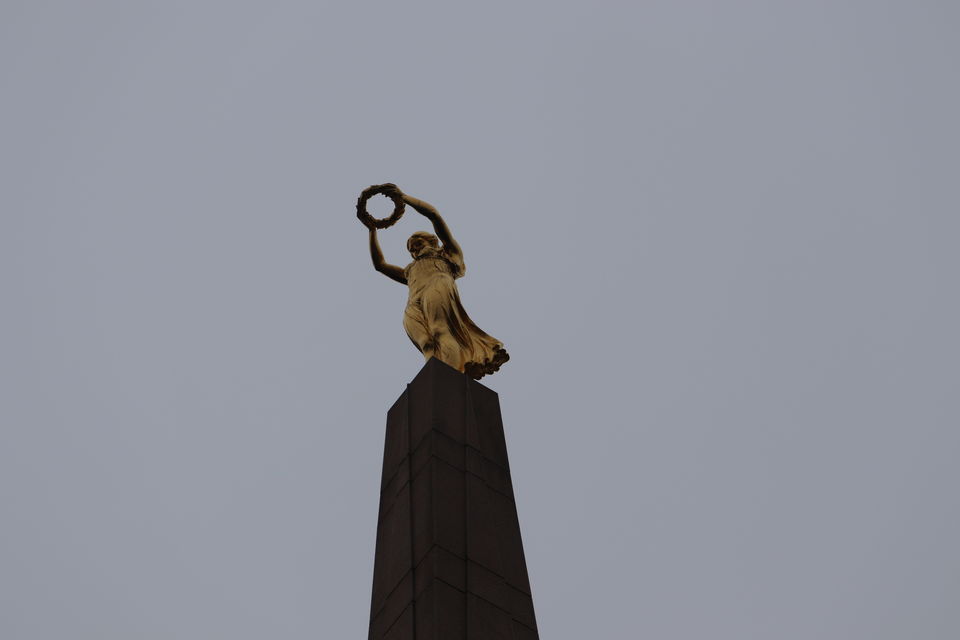 Monument of Remembrance is the memorial tower which is topped with a statue of golden lady known as Gëlle Fra. This memorial was built in memory of the soldiers who volunteered for service in the armed forces of the Allied Powers during both World Wars and the Korean War (Source Wikipedia). It is situated right opposite to the Norte dame cathedral in the Constitution Square.

There is a souvenir shop present near the memorial which opens in the afternoon. 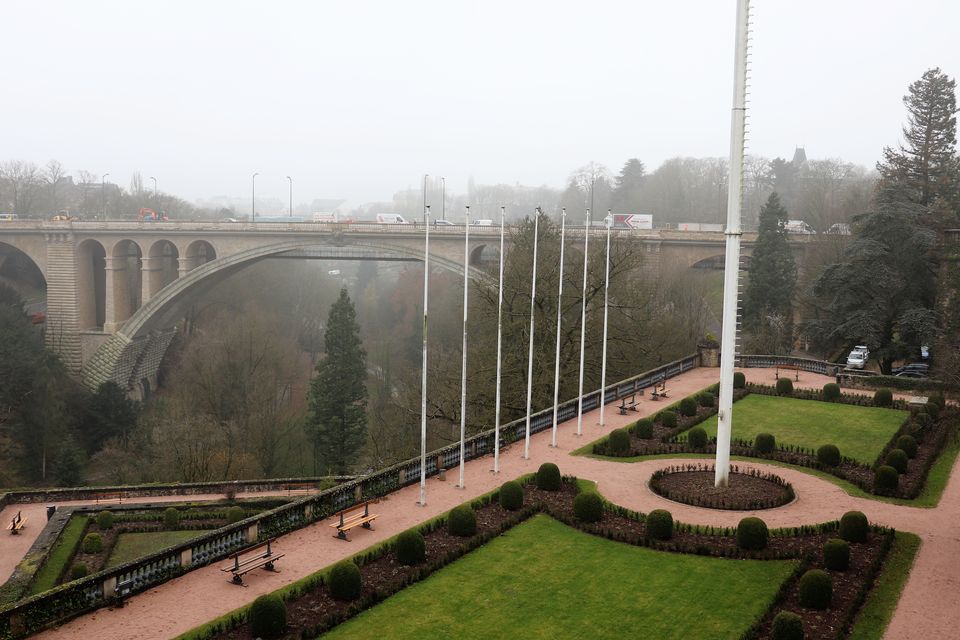 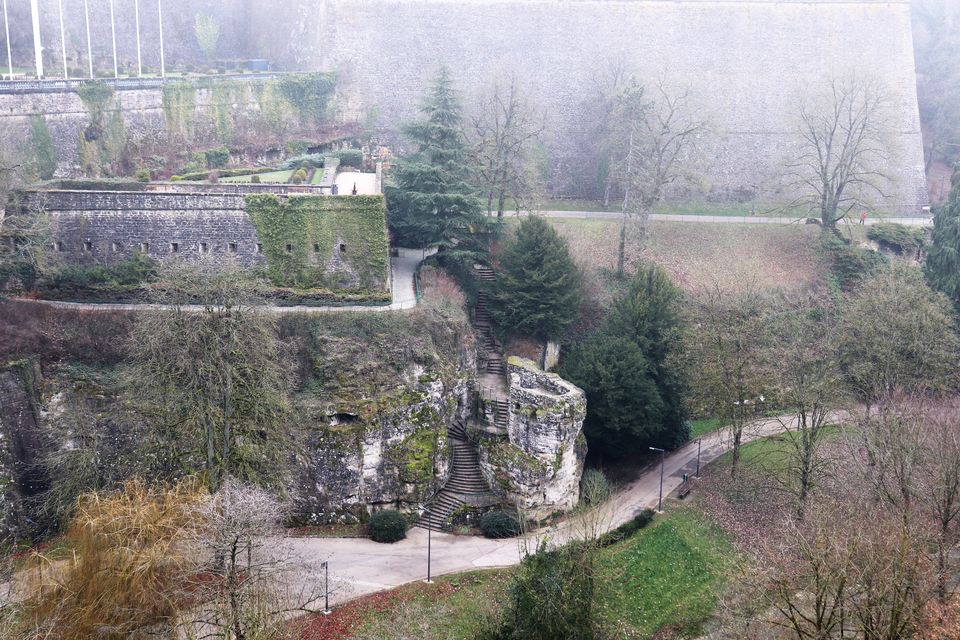 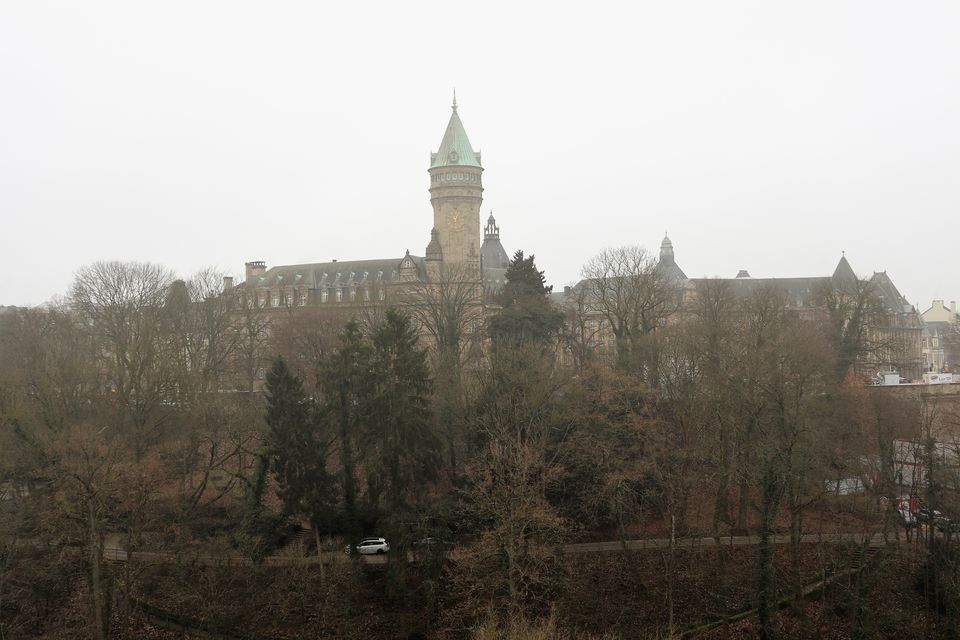 While I was wandering around the Monument of Remembrance, saw a sign board of Constitution Square and realised this was the second attraction under my list. So without checking the maps, I walked towards the pedestrian walkway on the square to watch over the Petrusse valley, which embraces old ruins of fortresses.

Tip: This place may appear as a parking lot but there is pedestrian walkway from where you will have a great view of valley . 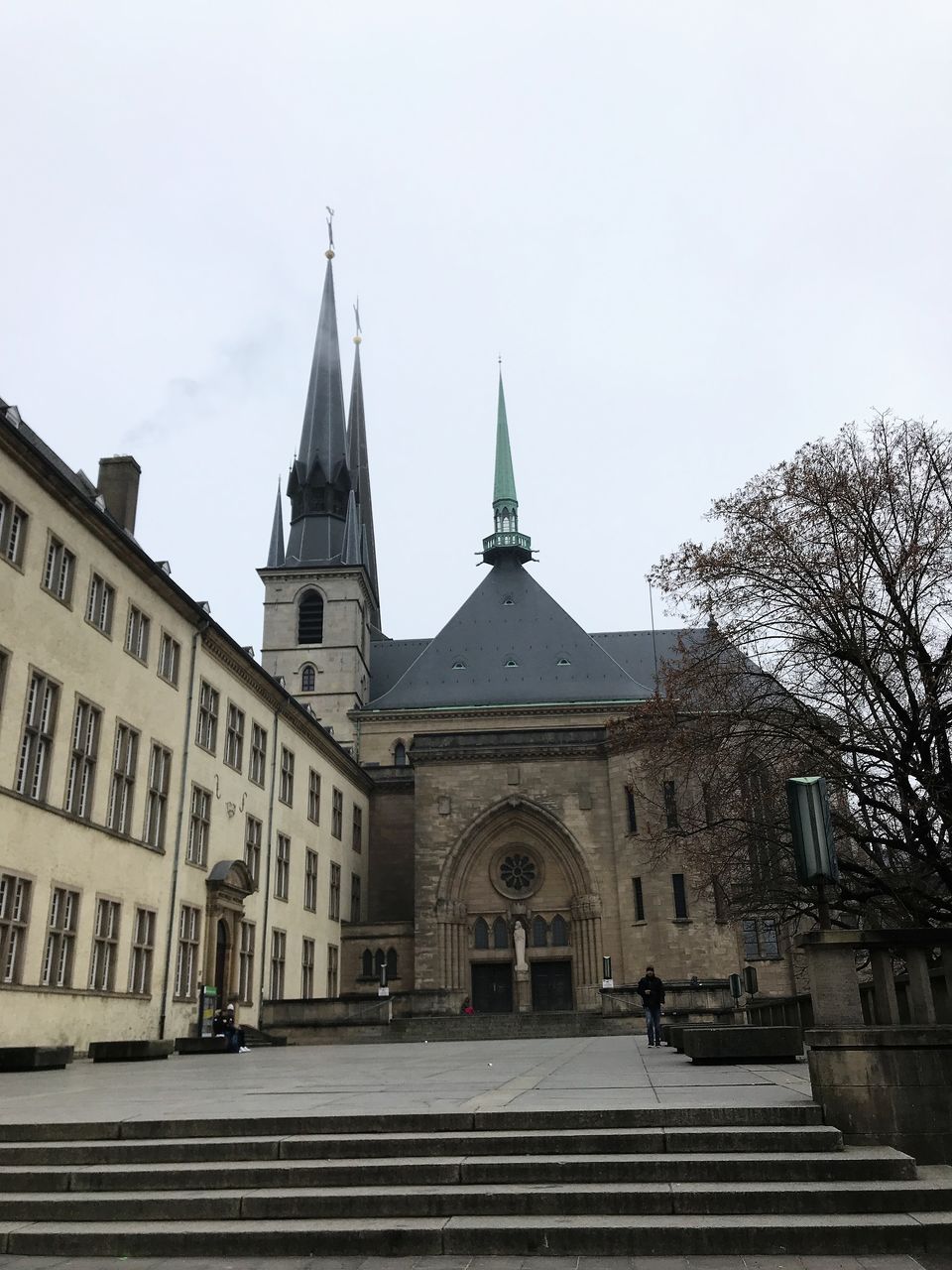 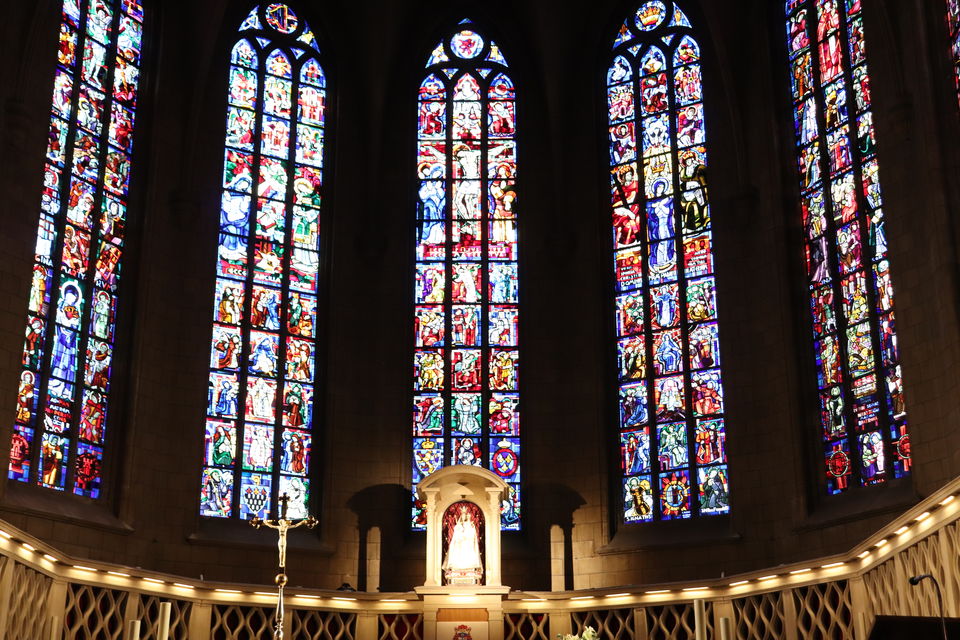 As I could see the spire of Notre dame cathedral from the constitution square, so I went inside cathedral to get a glimpse it. This Gothic style cathedral was built during 17th century and the only cathedral in Luxembourg. The stained glass work is truly mesmerising and the lighting behind the glasses makes the imprints more remarkable. Tapestries on the roof and the walls are also equally stunning and depict some stories.

Honestly, the cathedral is comparatively more appealing from inside than outside. I spent about 15-20 mins inside and then headed towards my next attraction. 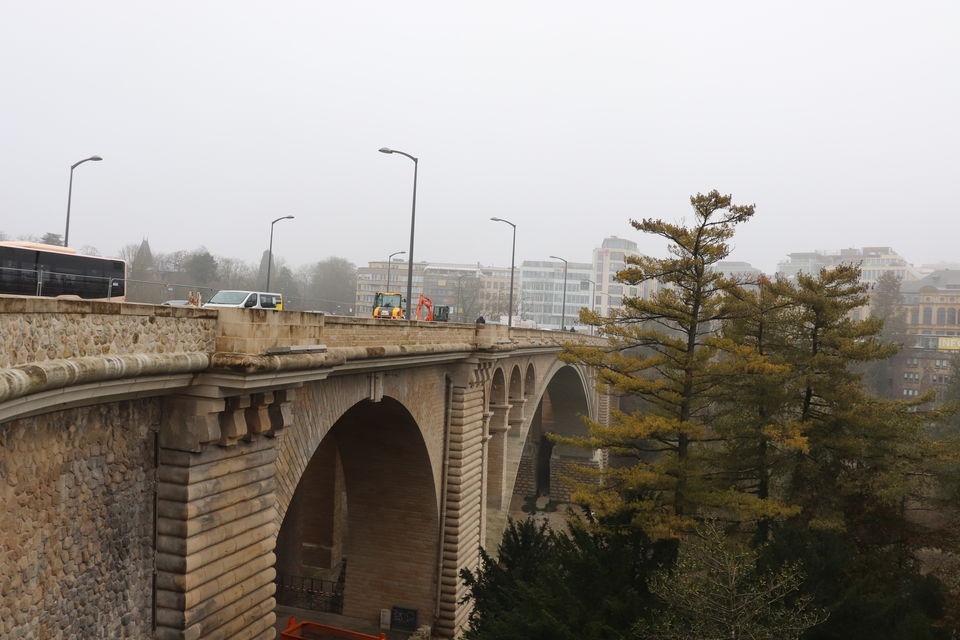 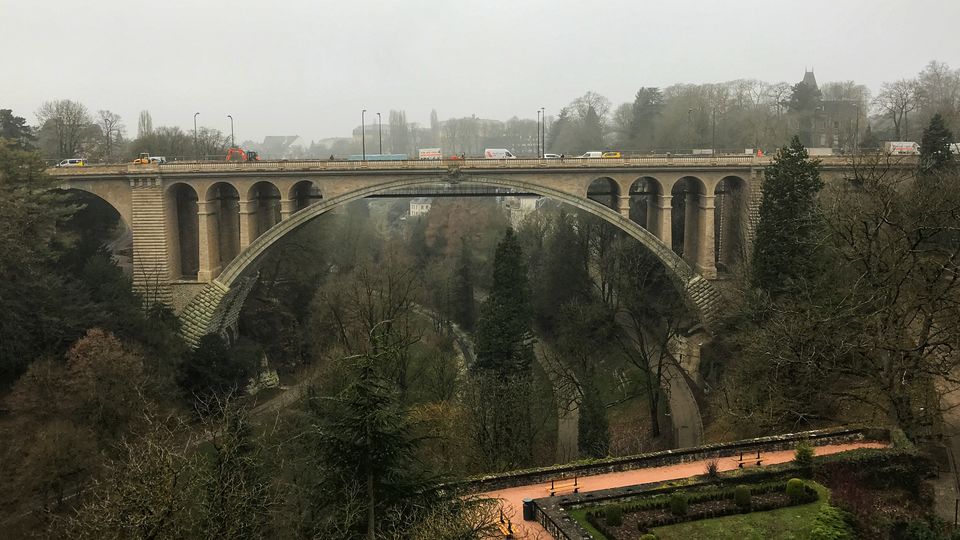 Adolphe Bridge is the stone ached bridge and has both pedestrian and motor ways, so started walking on it by looking at the Petrusse valley and arrived at the other end; where encountered Musee de la Banque, the building with clock which I saw from the constitution square. 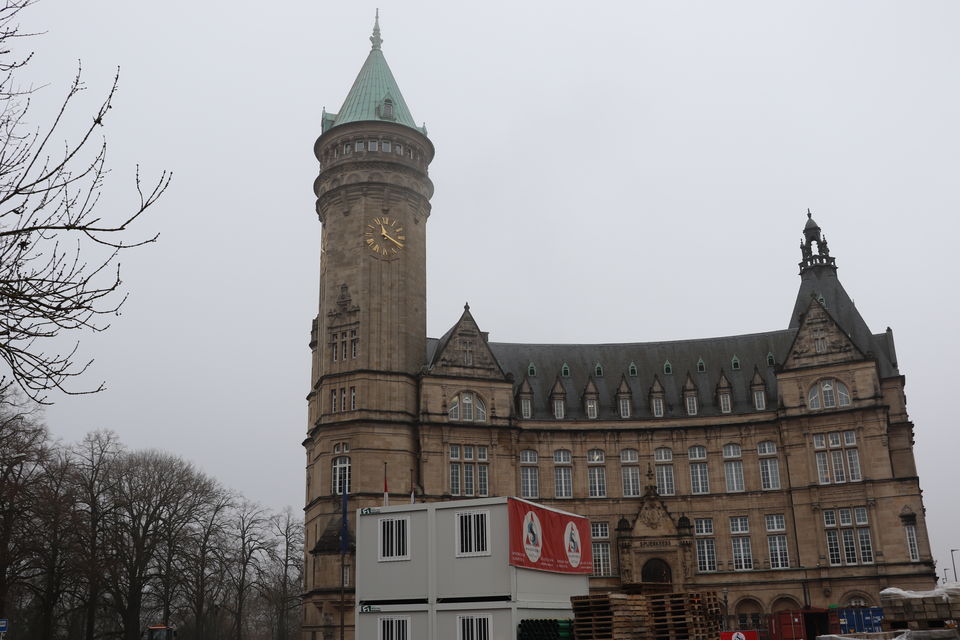 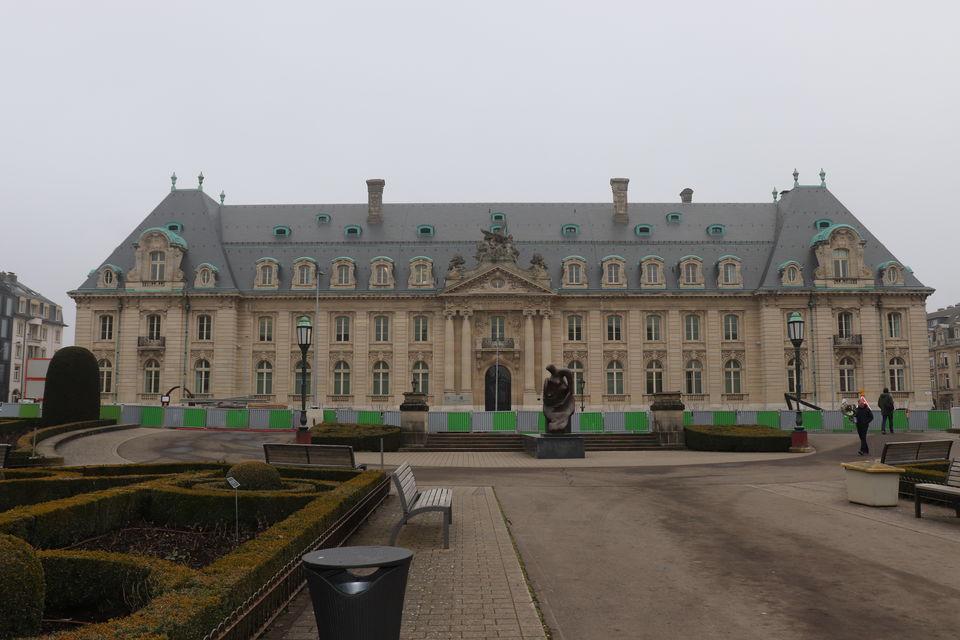 As I walked further, came across the former ARBED building which belonged to a the steel company, a pleasant park – Place des Martyrs. There are several restaurants around this place, so food wise you will not face any issue. I took a break from walk by sitting in the park for 5-10 minutes and then proceeded towards Grund.

Citadel of the Holy Spirit 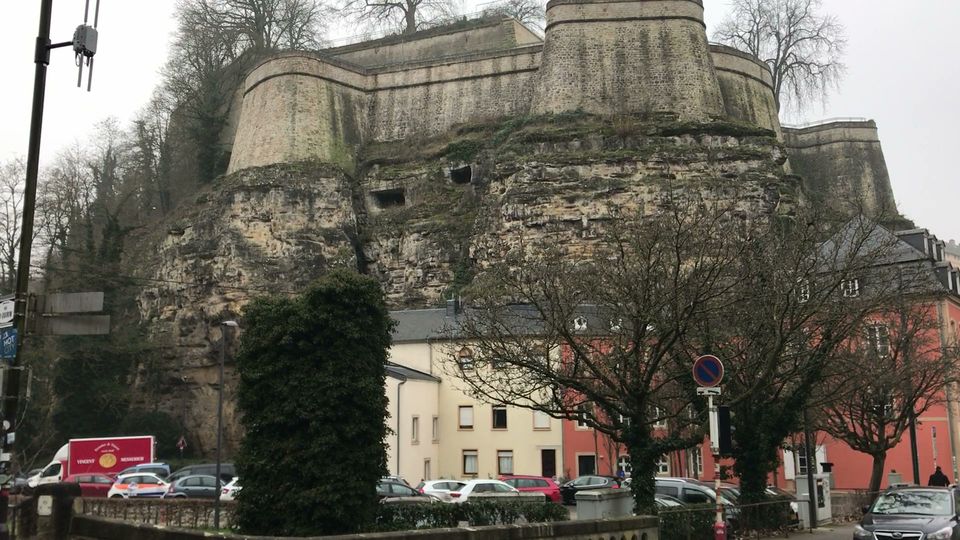 The pathways are pretty in Grund 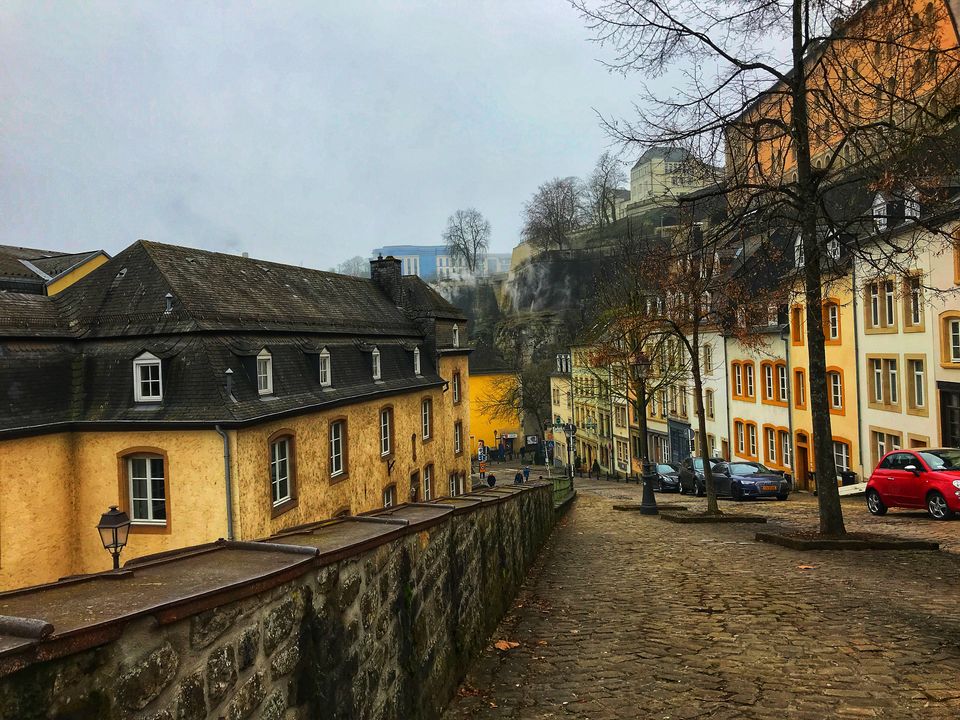 After I took a detour from the main streets and walked on the cobble stone streets of Rue de Saint, I reached the Citadal of Holy Spirit. Frankly, I imagined a cathedral of holy spirit as I got confused between the words cathedral and citadel. Nevertheless, this fortified centre is also known as Holy ghost citadel and built during 13th century. From this place, you get a stunning view of the surroundings, the hoisted area and the arches of Adolphe bridge.

Scenery from one of the uplifted viewing platform 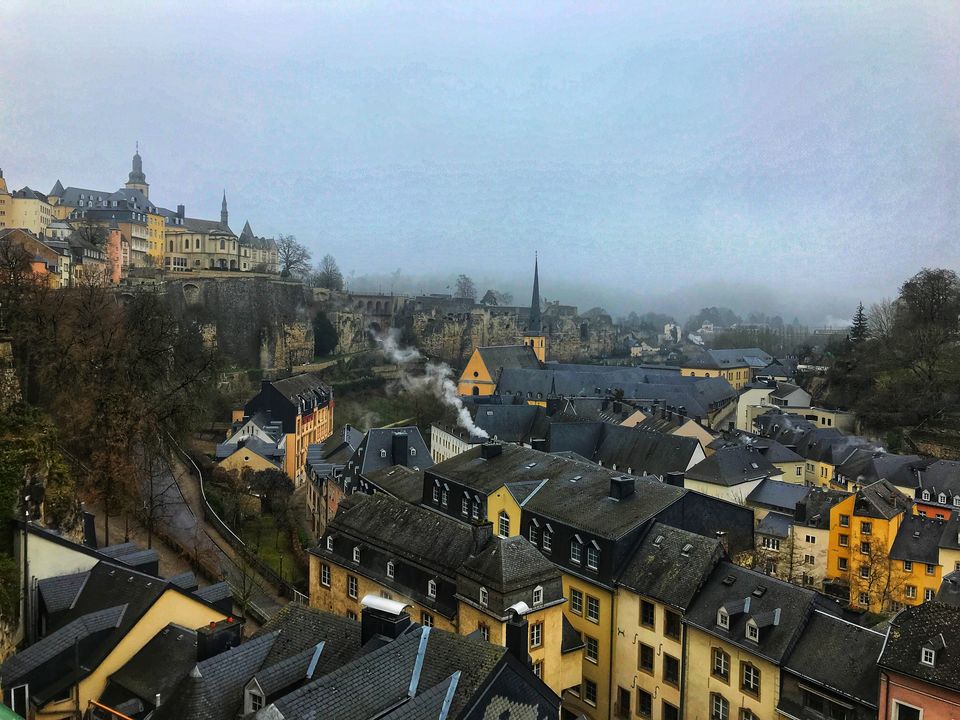 Grund is the prime location to check out in Luxembourg city. As this neighbourhood takes you back to the time of fortresses and far from the modern city life. I spent time just by wandering around this place without any maps and admired the scenery on the banks of the Alzette river. From the elevated level, I appreciated the picturesque valley filled with the houses painted in yellow color and crowned with chimneys venting the smoke; this landscape was the highlight of entire my trip.

Few facts about Grund is

*There is no traffic signals in Grund.

*It has preserved the rural culture and has not transformed into the modern suburb.

The streets of Grund 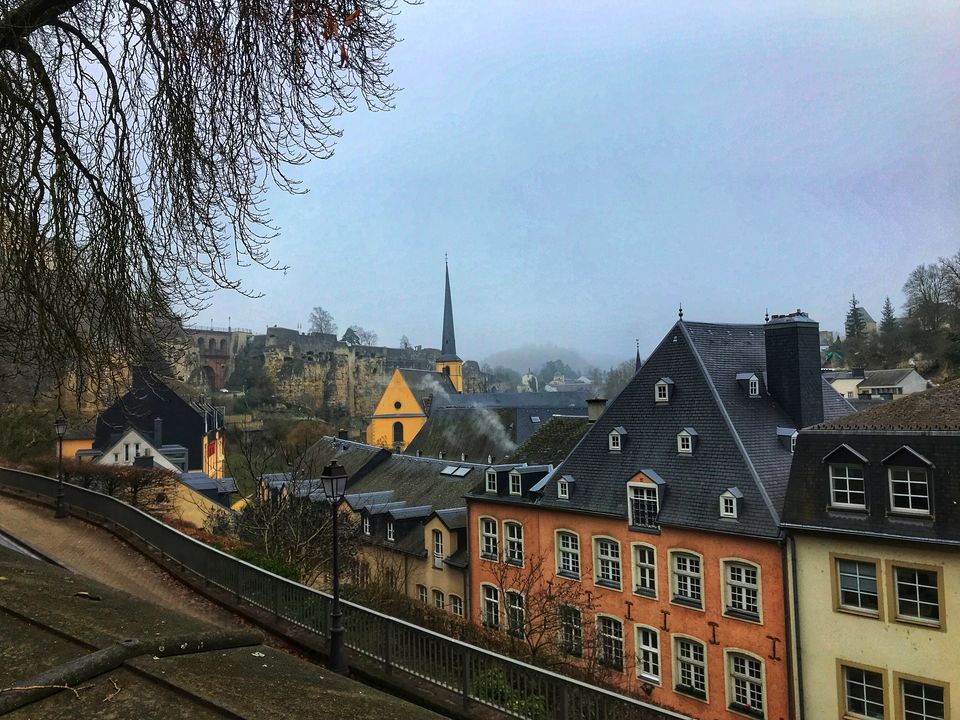 There are several viewing platforms in Grund to enjoy the scenery. The best one is Chemin de la Corniche. It is also known as the most beautiful balcony of Europe. The panoramic view of the valley and Grund is breathtaking from here. 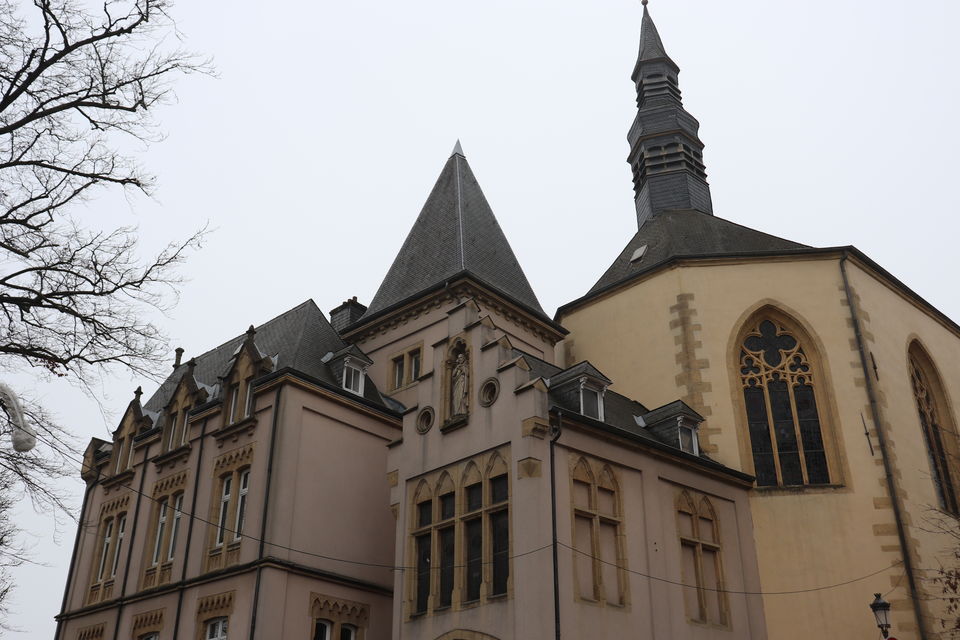 As I explored the surroundings near Grund, saw an old church situated on a square, adjacent to the casemates du Bock. This is a 17th century roman catholic church. I did not go inside the church, probably you can check this one if you want to. Just right opposite to this church the National history and art museum of Luxembourg is situated.

There is souvenir shop beside the church, from where I took fridge magnet worth 4 euros. 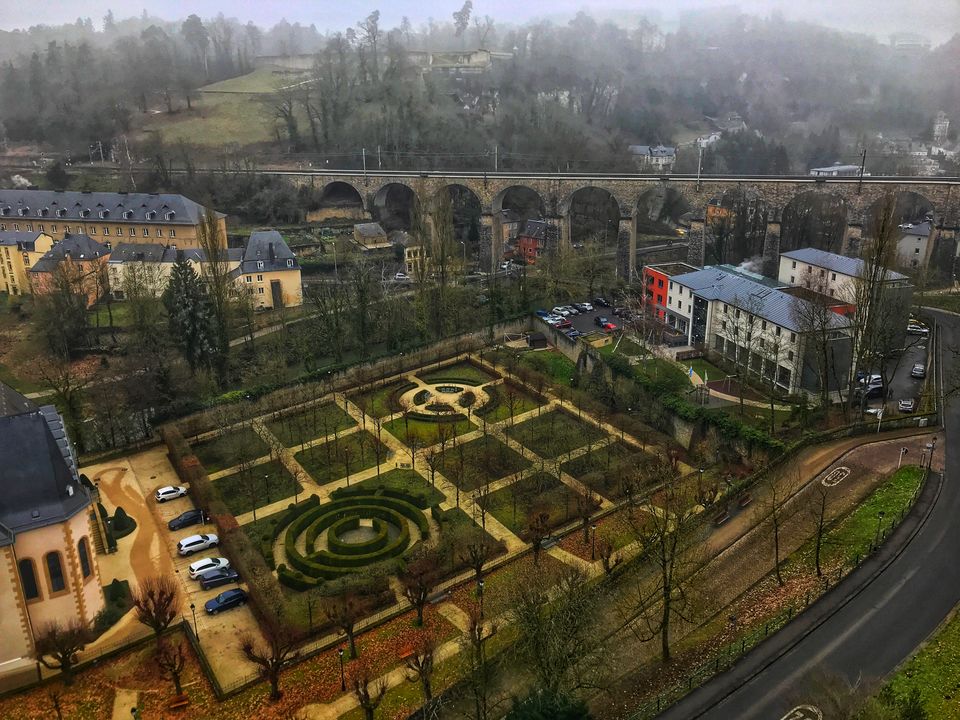 This casemates is a UNESCO World heritage site which is 17 km long underneath ground. This underground tunnel was bulit in 17th to has survived many wars.

Unfortunately, I could not get a chance to see it as during the winter, casemates are closed. It is a worthy place to visit and learn information about the longest casemates in the world. 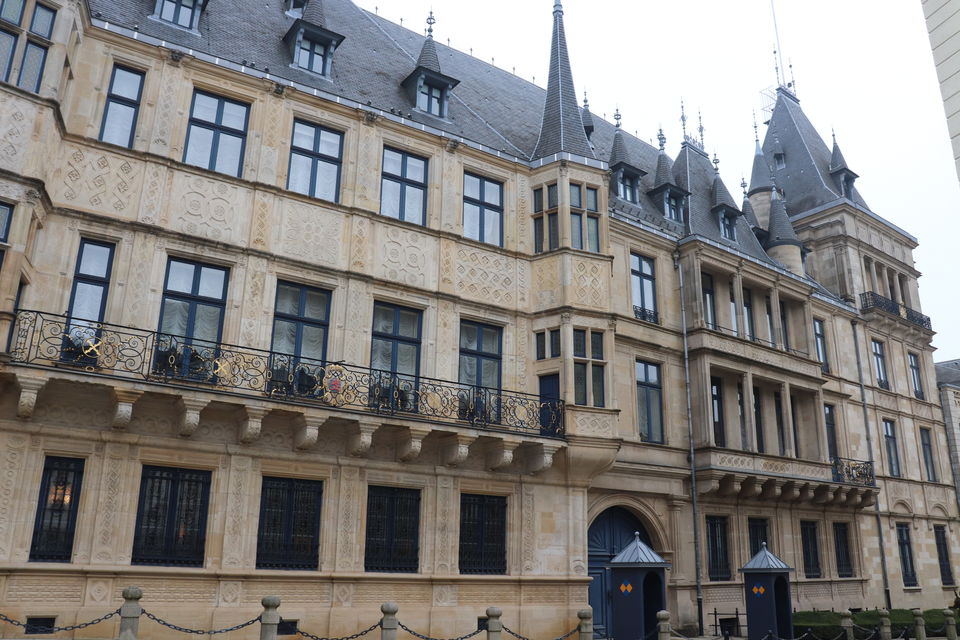 Old town square of the city 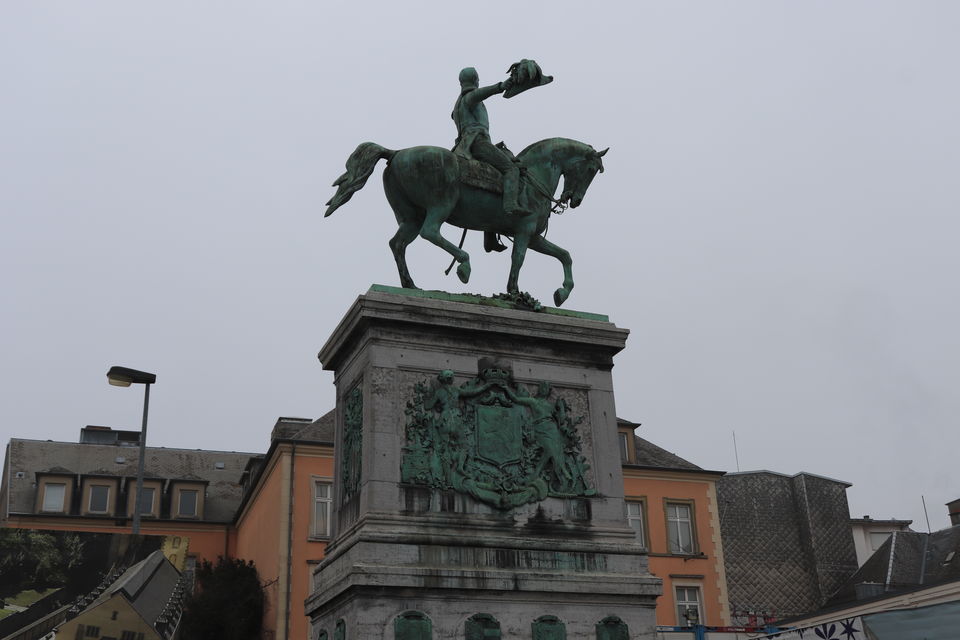 I strolled near the casemates area for 20-25 mins and climbed different viewing platforms to check the views from different angles. Later,I walked towards the Grand Duchal place and the city hall. As Luxembourg is a country of representative democracy with constitutional monarch and led by Grand Ducy, it has a royal palace which is situated in the middle of the city. The balconies and the gates of the palace are decorated with the symbol of Luxembourg dynasty. The palace is open for public during July-August when the Grand ducy is staying the palace. 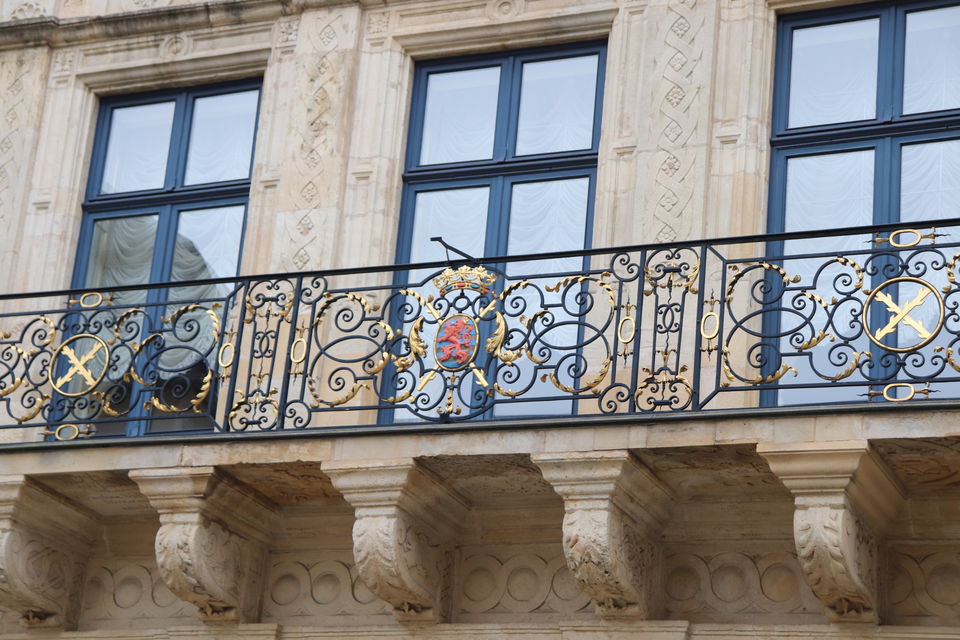 After I wandered around 8 km in the city to see these attractions, I prepared myself for the return journey. I had booked my return ticket in the late afternoon train.

For lunch, I had packed sandwiches and carried a bottle of water, so did not spend a penny during my trip. If you are a foodie and have an interest to try out different dishes, then research some options to try Luxemburgish cuisine else check at the information centre which is situated near the Grand ducal place.

I had an unique and wonderful experience by spending a day in Luxembourg city and recommend you to visit it when you are in nearby countries like France,Belgium or Germany.