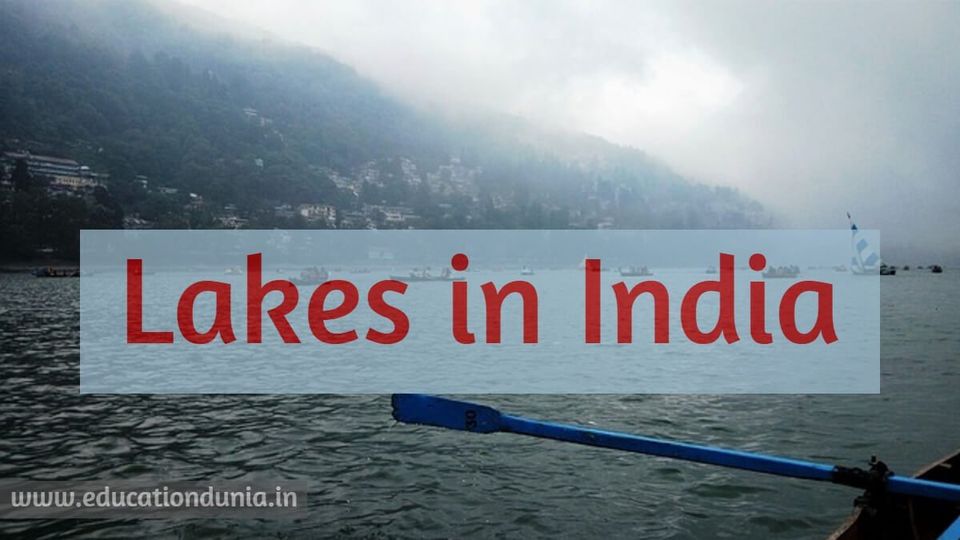 The lakes in India are spread far and wide, up and down, across the lovely terrain of India, owing to the large and varied landscape of the country. Lakes in this area are either naturally generated or man-made by previous rulers to meet the community's water demands. They are breathtakingly gorgeous, tranquil, and serene, and have been revered since the time of our epics.

From Kashmir to Kanyakumari, India is covered with serene lakes which have a unique story behind them.

The 200-square-kilometre Wular Lake is India's largest freshwater lake. The lake's basin was formed as a result of geological activity in the Bandipora region of Srinagar, and the area covered by the lake varies throughout the year, a phenomenon unique to this place. Boating, water sports, and water skiing are all popular activities on Wular Lake, which is also a favourite sunset spot.

The lake, which appears to be peaceful, is noted for its strong winds, which may blow powerful currents across it. The little island is known as 'Zaina Lank' is located in the middle of Wular Lake.

The Sumendu Lake, Mirik's most notable location, is lovely, serene, and yet stimulating. For those who don't want to walk around the lake, there is an 80-foot bridge that spans it.

Exhilarating pleasures include lake boating and a lakeside pony ride. The lake also has the strategic advantage of being within walking distance of almost every location in town.

Hussain Sagar Lake, Asia's largest manmade lake, is one of Hyderabad's most prominent tourist attractions, and it's known for the monolith of Lord Buddha that stands in its centre. This monolith structure is, by the way, the world's tallest of its kind! Hussain Sagar Lake, commonly known as Tank Bund, is located on a branch of the Musi River.

As you stand on the Tank Bund, you can see the entire lake shimmering around you like the lights on the beach twinkle, on 'Necklace Road.' The United Nations World Tourism Organization (UNWTO) has designated Hussain Sagar Lake as the "Heart of the World" due to its unusual heart-shaped appearance.

Naini Lake is a lovely natural freshwater lake. The crescent-shaped or kidney-shaped lake is one of the most well-known lakes in the Kumaon region. The Nainital Lake, which is bordered on the north by Naini Peak, the south by Tiffin Point, and the north by snow-capped peaks, gives a spectacular picture, especially during early dawn and sunset. It is particularly well-known for its boating, picnicking, and evening strolls.

Naini Lake, a beautiful lake that once captivated a European man, is now a popular tourist destination for visitors from all over the country.

The largest salt lake in India. It is indeed a bowl-shaped lake that surrounds old Sambhar Lake Town, which is located along National Highway 8 in Rajasthan, 96 kilometres south of Jaipur and 64 kilometres north of Ajmer. The demon king Brishparva's dominion includes the Sambhar lake, according to Mahabharata, and a temple near this lake is dedicated to Devayani as this lake, as this lake symbolizes the wedding of Devayani and King Yayati.

Also known as a 'Gift from the Thar Desert.' Flamingos and other migratory birds from Northern Asia make their home here. Pink flamingos, storks, pelicans, redshanks, sandpipers, and black-winged stilts are among the birds worth seeing.

Tamdil Lake, Mizoram's largest lake, is a man-made lake that exists solely to serve as a natural attraction for the state's tourism. Tamdil Lake, which means 'Lake of Mustard' in Mizo, is a gorgeous lake with magnificent terrain, crystal blue water, and a tranquil atmosphere.

The location is popular for leisure since it allows visitors to be away from the crowds and in the middle of nature. There are far too many ways to spend some pleasurable time at the lake, including boating, walking around its shores, or simply spreading a carpet, lying down, and reading a book.

Upper Lake is located on the western edge of Bhopal, Madhya Pradesh's capital city. It serves as a key supply of drinking water for the city's people. The Bhoj Wetland, which is now a Ramsar site and is Asia's largest manmade lake, is made up of Bada Talaab and the adjoining Chhota Talaab, which means small lake in Hindi.

The city of Bhopal has grown up around the lake since it was built in the 11th century. The lakes are sacred to the inhabitants, both religiously and culturally.

Boating and the lush green and colourful gardens on both sides make this a gorgeous and quiet place to visit. It's advisable to go for a stroll in the morning to get some peace.

Visitors can go to the Saputara Museum, which displays the lifestyle, culture, and history of Dang's Adivasi people.

Fateh Sagar Lake, located to the north-west of Udaipur, is a beautiful lake that is one of the city's most popular tourist attractions. It is the city's second largest artificial lake, surrounded by the Aravalli Hills, and is noted for its beautiful splendour.

Its surreal beauty and simple charms have made it one of the city's most popular weekend attractions, and anybody travelling the city should visit it.

Ashtamudi Lake, Kerala's second-largest lake, is located in the Kollam district. The lake stretches for 16 kilometres and occupies over a third of the town of Kollam. Its name, Ashtamudi, is derived from two words: 'Ashta,' which means eight, and 'Mudi,' which means branch, implying that the lake contains eight branches.

Allow the local oarsmen to lead you on a unique voyage to uncover your inner self. You will be permanently enchanted by the beautiful foliage and diverse biodiversity.

The only good location to go on a hot summer day or a starry freezing night is to the lake. You'd travel to the lake to enjoy the water, the sun, the events that are taking place, or simply to spend time with family and friends. There are some pretty distinct smells while you're at the lake.

So, which of the lakes would you like to visit next? Please share your thoughts in the comments box below.