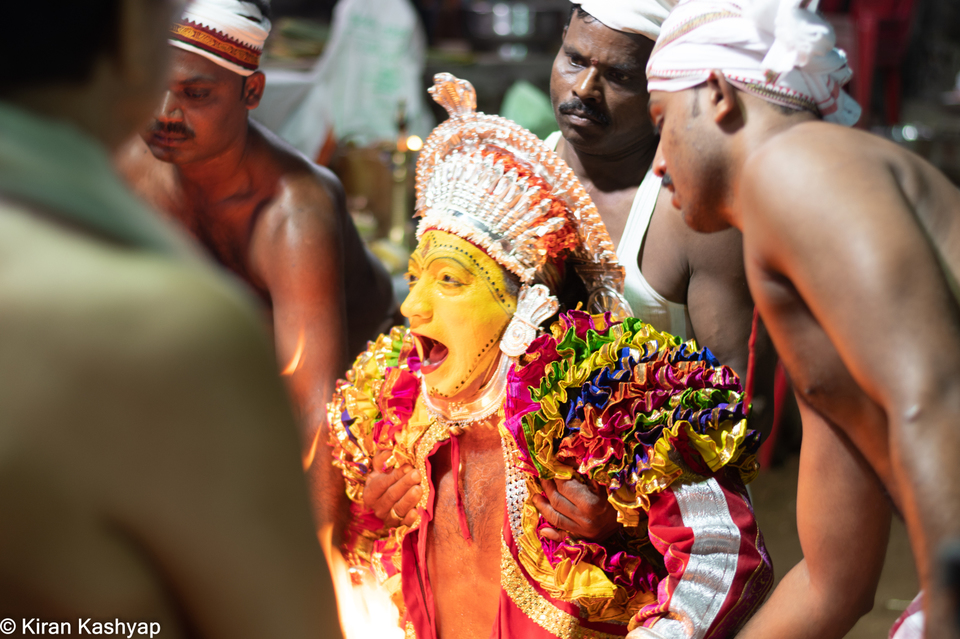 I gathered my excitement and waited anxiously for the moment to begin while the rest of the world appeared to be absorbed in divinity. The eerie silence in the crowd made me nervous. But it was soon overtaken by thunderous actions of ‘ Bhutas’ who were dressed rightly to the occasion. They had a job to do, and it was to ‘ Invoke divine spirits’ to please God. This powerful, irresistible, and captivating ritual dance is popularly known as ‘Bhuta Kola’

The temple did decorate with different colored flowers, garlands, and brightly lit LED sets. Temple streets were filled with food stalls and several other attractive stores to let the world know the reason for the celebration. It was the auspicious occasion of the annual festival of Shri Vishnu Murthy Temple. A happy mood during this time brings people together from different cultures to celebrate the supernatural power that they believe inside. It is an opportunity for the locals to meet their friends and extended families who would be gone to different cities for a living. They celebrate life, just like old times.

South Canara/Dakshina Kannada is located on the shores of the Arabian Sea and is well known for its coastal cuisine, excellent beaches, heavy rainfall, and of course, unbearable heat. What most of them do not know is how rich the Tuluva culture is.

Whether it is the famous dance form “ Yakshagaana” or an action-packed buffalo race “ Kambala” or a beautiful divine structure or a fiery ritual folk dance “Bhuta Kola“. They all are unique experiences to enjoy.

Having heard and read about Bhuta kola so many times, I found a chance to witness this wonderful enact of gods and demigods by a group of Tuluvas who are performing this ritual for generations.

The legend says it’s a union between Devas and Daivas, where “ Devas” protect society and “ Daivas” protect Devas from demons. The Tuluva community believes in pleasing Daivas little more than the Devas, as the former could bring difficulties in life when ignored.

“Bhuta Kola” is performed by a group of specialists from a particular caste who would spend an ample amount of time in prep work before the action unfolds.

At the beginning of Kola, there existed a few sacred procedures offered by the temple priests. Many ethnic groups in the coastal belt are into this performance. The one that I met had a group of 4 dances enacting different Daivas of the temple.

The head of the group who usually dons the spirit of Kodamanitaya is considered more powerful and known to be principled than the rest. Each folk dancer would be costumed with colorful outfits, flowers, bangles, ornaments and, other ritual objects. The group will be accompanied by musicians and helpers to support them with the prep work.

The ritual dance would typically run for the whole night as there are several poojas and procedures to be performed. The village head, temple committee members, community heads, and many other important people would be in the front row to seek blessings from Bhutas.

While many religious groups believe in just Mantra, it seems like the Tuluva community believes both in Mantra and Tantra. So, on the day of Kola, there will be a tantric priest who helps with the rituals.

Bhuta Kola is said to be one of those ancient-secular functions where people believe that the ritual could end all feudal disputes in the village, returning peace and prosperity to every individual. Hence, a big gathering on the day of Kola is a typical scene. There are several compelling moments during the dance which could take the audience to a different world.

The whole enactment was so compelling that it took my breath away. The amount of energy, precision, and divinity required for this activity is enormous, and the Kola group does it efficiently till the very end. As great stories have great endings, “ Bhuta Kola” ends with Daivas submitting themselves to Devas — the supreme power of the universe.