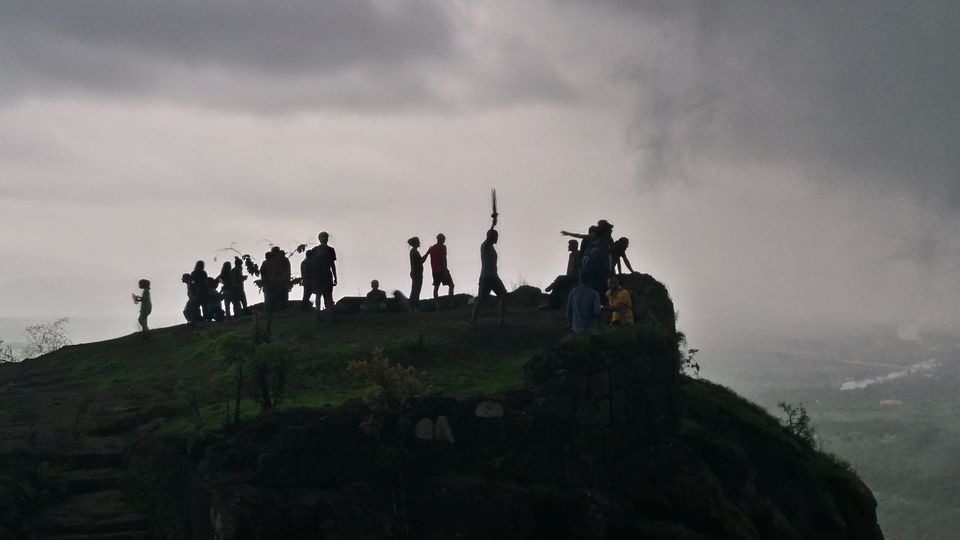 It's mid-June and the monsoon has knocked the doors, marking the start of trekking season. And when you are in Mumbai, you are in a trekking heaven.

This Sunday i.e. 17th June we decided for Karnala fort as a warm up trek to kick off the season. Karnala fort is a fort in the Raigad district about 10 km from Panvel city on Panvel-Goa highway. Rains have been doing short sprints for the past two weeks now, so the temperature has come down considerably and apt for hikes.

How to reach Karnala: Reach Panvel station and book an auto for four towards Karnala for Rs. 200. To reach Panvel station you can take a local from Thane or CST. There's also bus service from Kalyan bus stop. You can also take a share auto towards Karnala, however it's difficult to find it at Panvel station. You can easily get a share auto at Karnala for coming back to Panvel for Rs.350. After a cup of tea at the teapoint outside Karnala, we bought the entry tickets for the Karnala bird sanctuary costing Rs.35 each. A word of caution, the authorities do check your baggage so if you have a camera you have to get passes for it too.

We entered the sanctuary around 9:00 AM. It's a concrete road at the start adorned by green trees on both the sides, there's a little playground for the kids and you can see few caged birds. Not many, just a few parrots, peacocks and maybe a kite or two. There's a small eating area in the premises with two small restaurants serving Maharashtrian food. To start the trek, there's a board near the eatery pointing out the direction towards Karnala.

It's a short sweet jungle trek with an assortment of terrains. At the start you will find wide steps formed by small rocks placed in line restricting the soil in its place forming staircase like structure . As you move forward, the structured steps disappear and you will find routes made out of rocks and boulders making there way through the trees. These rocks being omnipresent serve as comfortable resting spots. The jungle is decorated with intricate designs formed by the entanglement of tensile roots and branches. Now the steps are made of the roots of trees, as the upper layer of soil is washed away by the gushing water of the rains coming down from the top.

After a hike for 45-60 minutes from the start we reach a point (I guess it's Nigri point) where the road divides into two, one leads towards Karnala fort and the other towards Posarigaon. From here on its just 1.5 kms of trek. There's also a small shade like structure at this point for some respite and enjoying the view. Now, the route is a plain walk for a while before the rocky path starts towards the fort. From here on it gets a little more tiring as the sun rays easily penetrate through the trees. The route here is made out of square cut rocks with a more than normal height which someone is used to, but it's a fort so it's understandable. After 30 minutes walking from the Nigri point we reached the Karnala temple which houses a few idols of Indian gods and goddesses. This a scenic spot and provides a panoramic view of the surrounding area. We can see other mountain ranges around Mumbai from this point. It's a breathtaking view from here and takes away your tiredness of all the walking you have done up until now. The tree at the edge proves to be great for a snap or two and one can sit here for hours contemplating about life and enjoying the silence. There's a shade here too, next to the temple. You can see the Karnala fort watch tower from here and it is also the entry point for the lower part of the fort. The lower part of the fort was all green after a few weeks of rains in the region. It felt as if the nature had grown young again and felt amazingly jolly and playful. You will feel your energy revived after the enervating walk.

We soon moved towards the end of the fort at the edge of the hill. There's another part to the fort on the other side. Unfortunately, there's no way to go up the watch tower which is so evident from far off distances and stands as a distinct identity to the fort. This watch tower was strategically important to monitor the activities between the Konkan and Maharashtra region. Below the watch tower is a water cistern which should have been used during earlier time as a water reservoir. Now, the water is not potable, though it is clear in some parts. One can find a few honey combs on the watch tower, however they are not harmful during the monsoon.

As we sat at the top at the cliff, enjoying the view and clicking photos, we could see the clouds at far off distances showering. In no time the storm clouds gathered around the fort and it was raining cats and dogs. I ran to take the shelter under one of the gates, but my friends dragged me into the open.

We soon started our descend as the rain wouldn't stop. Since it was raining we couldn't feel the heat or thirst and so it was a rapid descend giving legs a great workout for strength and agility. It was only at the top where the stairs are narrow and unsafe, so we treaded carefully, going past the crowd. Once past the temple we hustled our way through the crowd, swinging to the rumbling music made by the water gushing through the rocks and the roots. Splashing the muddy water and jumping over the rocks we made our own shortcuts. The trees proved to be great help giving the much needed support when in moments of slipping or an unbalanced foot.

I would recommend this trek to experienced and novice alike. One can bring in family for this short trek as it doesn't requires much stamina and the place is usually crowded in the monsoon.

SPONSORED
Want to book a similar trip?
I accept the Terms of Use and Privacy Policy of Tripoto.
SPONSORED
Related to this article
Weekend Getaways from Mumbai,Places to Visit in Mumbai,Places to Stay in Mumbai,Things to Do in Mumbai,Mumbai Travel Guide,
Tagged:
#karnala #monsoon treks#mumbai#treks near mumbai#easy treks#adventure#adventure