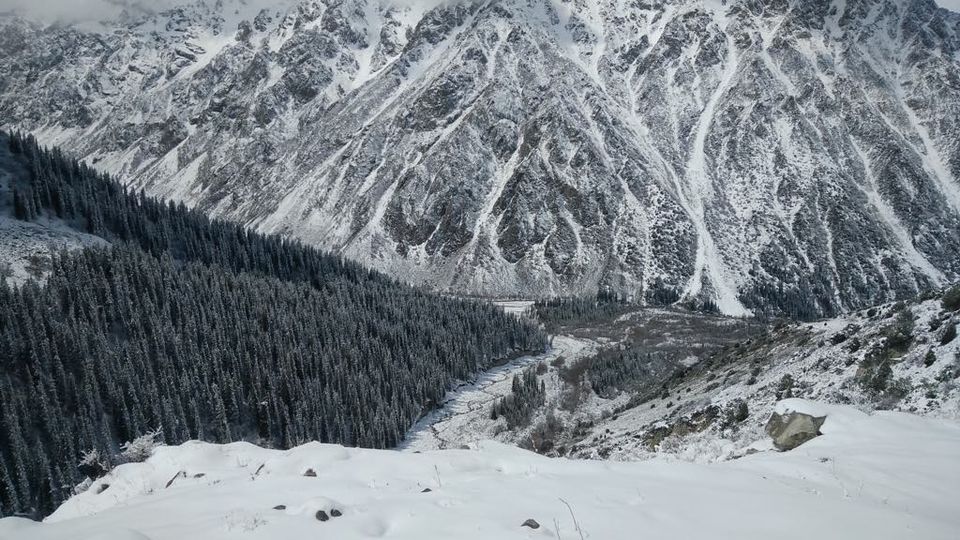 After having made it through the day, I had a spring in my steps while approaching the bio-metric system mainly for two reasons - 1. It was Friday and 2. It was about to rain. Brimming with plans for the weekend and in anticipation of devouring Maggi in this wonderful weather, my colleagues and I excitedly wheeled out of the main gate with Mountains by Message to Bears playing in the background.

But we were not the only ones on the move with a groove. The storm clouds rolled in, accompanied by the screams of thunder. Rain gods were about to put up a grand performance, it seemed. Just when we were primed for an early evening for ourselves, our enthusiasm was interrupted by the traffic jam. "It looks bad. Very bad" said Rajiv, who was driving the car. It was then pretty much confirmed by a motorcyclist coming from the wrong side, announcing "It's going to take 45min for the traffic to clear!", while manoeuvring for every inch of space in front of him.

So, we had a quarter of an hour to spend, and slowly our excitement was starting to dissipate. My colleague (The borderline frenzied colleague) who was drowned in his phone until now, aloof of the surroundings, suddenly says, as if gasping for air "Yaar Shivam, your Kyrgyzstan pictures and link to your blog came up on my Facebook feed. Which reminds me, we are yet to hear about the second day of your trip!". "We anyway have to fill our time, you might as well tell us about what happens on the next day", the friend who was driving chipped in. The thought of taking a trip down the memory lane led to the excitement to rise like a phoenix within me. Acceding to their demands, I asked Rajiv to lower the volume of the stereo and began telling them about my second day in Kyrgyzstan.

I woke up before the alarm clock went off and the sky outside was still a big dark ocean. The window was cracked open, and the air was so crisp that it had paralysed me a little. Struggling to get out of the bed, I play, rather fittingly, "Coming back to Life" by Pink Floyd on the Bluetooth speaker. Srinath, awake now, slightly opens his eyes and turns off the alarm. He lies comatose for a while, but it seems his eyes are the only ones with any movement. He then goes on to give me that look which means that it is me who is going to the bathroom first. Putting up a fight for a few more minutes for the title of "Sloth of the Day", I give in and swiftly get ready. Srinath goes in next, though I had to drag him out of bed. Putting on our warm clothes, we get down, full of beans for the day hike in Ala Archa National Park.

We straight away head towards the canteen and quickly have our breakfast. Our friend and the owner of the hostel, Aigul joined us and talked us through our plan for the day. All set and equipped with the necessary information from Aigul, we leave.

The cab driver dropped us at the gate. We were there. The Ala-Archa National park is an alpine nature park in the Tian Shan Mountain range. As we entered, we saw the mountains, which were covered in the blanket of snow, surrounded the gorge of a frozen Ala-Archa river.

And behold. Our first snow! Many remember the memory of their first snow as they remember their first love. It is vivid. After having appreciated the snow in it's all marvellous form, we started hiking. It was so quiet. There is something about silence in the cold. Freezing and panting, we slog forward. It was steep. We stopped to breathe and set out again. Although we had intended to reach the waterfall, which was still a couple of hours away, the cold wind was not helping. We both looked at each other and thought this is not what really matters. Sometimes, it is all about enjoying the sounds of nature, listening to the rhythm of our heartbeats. More importantly, it is about knowing what it is to feel alive. There was an untold understanding between us at that moment.

Realising we were starting to go into the red, we stopped at one of the lower peaks. There, I could see a spot so idyllic that it invited me to sit down for a while. There were no words to be exchanged there. Immersed in the landscape in front of me, I stared at the mountains. It was no contest. It was fascinated by them. They made me realise how small I'm in the grand scheme of things.

Having rested for a bit, we started our descend. Excitement had been taken over by perspective as if nature had tamed it. Srinath called the driver, and we took the cab back to the city, after having spent almost half our day there in the nature park. We had a quick lunch at an Indian restaurant, where we were surprised to see a lot of Indian students. Later we got to know that there is a strong Indian presence in the medical college in Bishkek.

Next on Aigul's list for the day was the Osh Bazaar in Bishkek. It is one of the largest markets in Kyrgyzstan. It was one of the best ways to get introduced to the Kyrgyz culture. We were tired from the hike, but the energy in the market woke us and our senses. Spices, food, musical instruments, clothes were all there for sale. But the most appealing and attractive thing on display was the warmness of the local people. And it was absolutely free! We bought jackets, cabbie caps, interacted and laughed with the shop-keepers. But one of the highlights was this blind old man playing a melancholic Russian ballad on accordion.

After roaming around the market for a couple of hours, our last stop was the Ala-too Square in Chuy Ave, which is the heart of Bishkek. It is the centre of the city where there is a colossal statue of King Manas, Lenin's on the Old square just behind it and a monument of the famous Kyrgyz author, Chingiz Aitmatov. It was extremely lively with kids playing around and fountains trying to seduce the beautiful, colourful flowers nearby. We spent the evening clicking pictures and sitting there on the bench talking life.

The sun sets quite early there. We get off our arses, had a fancy little dinner at a nearby restaurant and decide to walk to the hostel. After having soaked the city in, not in its entirety by any form, but enough to take that feeling back home with us, we reached the hostel, tired and drained. We were greeted by a couple of guys as we entered the hostel, one French and the other Canadian. We shared our experiences and they shared theirs. 15 minutes pass and our legs give in. We bid them adieu for the night and crash on the bed.

We had a bus to catch at 6 the next morning which would take us to Kyzart for the 3rd leg of our journey. We were so tired that we had connected our Bluetooth speaker to the phone so the alarm would be loud enough to wake us up. And it was so deafening...

Ironically, so was the honk from the car behind us. The traffic had freed up. With the flow of story disturbed, I assured my friends that I will continue the story of my 3rd day in Kyrgyzstan over a cup of chai and Maggi. Rajiv turned up the volume of the stereo, and to my pleasure, it was "Safarnaama" from Tamasha playing on the radio. I looked out of the window, smiling to myself. The memories rushing in like a flood.