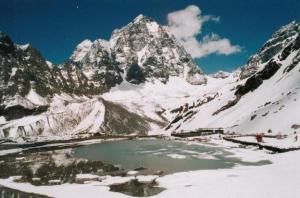 Manimahesh Kailashyatra is the pilgrimage taken to reach Manimaheshlake in the Bharmour region in Chamba district in Himachal Pradesh. At least half a millionhindu pilgrims undertake this holy yatra that starts from Janmashtmi and ends on Radhastami every year. The yatra is undertaken over three days and covers a distance of 13 kms by trekking.

ManimaheshKailash peak is known to be the home of Lord Shiva. People believe that it is during these days that Lord Shiva and Parvati take a bath in this holy lake. The pilgrims reach the lake to get a glimpse of the Manimahesh peak in the lake which has an oval shape. There is a four faced marble Shivling that is the main deity which is worshipped. The pilgrims take a dip in the holy water of the lake and make three parikramas around the lake. This holy dip is also known as ‘Man Ka Mahesh’ as it is known to offer complete spiritual satisfaction to all pilgrimage undertakers.The peak is still unscaled by humans as people believe it to be sacred and have human or hermit like projections of people who have been frozen in their attempts to reach the top.

Before The yatra- Bharmani Devi Temple

The ManimaheshKailashyatra is believed to be incomplete without paying a visit to the Bharmani Devi temple. The temple is located at a distance of 4 kms from Bharmour. It is necessary to take a dip in the pool before starting this yatra else their yatra is deemed to be incomplete.

The Manimaheshlake is located at an altitude of 13,500 feet. Pilgrims need to reach Bharmour and then take cars or buses to reach Hudsar. The pilgrimage starts from Hudsar and involves trekking of almost 13 kms. Within 3 kms of trekking, you are led into dense forests. If you are too tired to complete the entire journey in a day, you can take a night halt at Dhanchho at a distance of around 6 kms.

From Dhanchho you can take either of the two routes available to reach the lake. Pilgrims prefer to take the new route which even though is a bit longer but is easier. You can also take a mule to cover this distance. The journey is steep and is marked by deep shrines. After a few kilometers you will find the twin ponds located at a small distance from each other. There is a small temple near the peak.

Even though the yatra season is from July to September, you will find a large number of pilgrims in May, June and October too. In fact every year a fair is held in Bharmour and it gives a rare chance to tourists and pilgrims to study the customs and rituals of this place.