The Pristine Paths of Jibhi-Jalori Pass

The mountains have always been my go to place. It has something about them, something never-ending, cascading through my dreams, always; especially the snow clad ones. Adding to the places close to my heart is this trip I'm going to write about below.

Jibhi, one of the most pristine treasures of Banjar valley, is soon becoming one of the hippiest places in Himachal. Located at an approximate distance of 500 km from the capital city of Delhi, it is the best shot to be at for a short or long weekend.

I went there with the closest of my friends. Started after office, from Delhi on Friday, Nov. 29, 2019, night. Driving on the Chandigarh-Manali highway we raced our car towards the mountain gem. I drove down the highway in zero visibility caused by smog late at night, which delayed reaching the destination by a few hours. It is long drive there, thankfully we were two drivers.

On hitting the montane terrain, you can see a clear sight of the meandering Sutlej river, Bhakra Nangal dam isn't very far from the route in km, but roadwise, it is. If one wants to visit the dam, there is a longer route via the dam premises taking you to Jibhi. We chose otherwise.

We reached our stay for the next two days, Mudhouse Hostels at about 1 PM on Saturday, Nov. 30, 2019, awfully tired, to be greeted by the ever-smiling host at Mudhouse. We had booked a dorm for me and my three friends. The perfect location of the hostel made it a perfect stay. There is a small but extremely beautiful waterfall, just 5 mins from where we were staying. We went there enjoyed the view, clicked some pictures, and came back. The temperature dropped to -1 that night, but that didn't deter us from experiencing the magnificence of the night sky that Jibhi can boast about. We retired for the night as we had a long day ahead.

Woke up early morning, had the perfect English breakfast, guided by the humm of the running stream beside our hostel and birds chirping. We were heading for Jalori Pass, via Sojha, to experience the beauty after the first snowfall of the season. We booked a cab for Rs. 400 for 4 people and reached Jalori. The roads leading to Jalori are steep and narrow, on it, they were snow covered. Can't describe in words the beauty of the color white!

On reaching Jalori, we first saw the temple of Jalori Mata and a few tea shops. Not wanting to waste any more time, we headed towards our trek, Serolsar Lake, situated at a distance of 5 km from the starting point at Jalori Pass. We were wearing normal city boots and sports shoes and that made our walk difficult, initially. After walking for a few meters, we got the hang of it and were absolutely comfortable (so, don't worry about carrying/renting snow boots; any shoes with a good grip would work).

We walked past narrow and rocky, snow covered paths with the most beautiful view of the majestic Pir Panjal range standing tall with pride. Sunlight-kissed snow-heaped pine trees, vegetation hidden under snow, water dripping icicles, we experienced all, on our way up. We took on the trek without a guide, trusting our instincts about the route up, since there are no sign boards pointing towards the lake. We followed the foot imprints on the snow and general geographic sense when the GPS stopped working. Astonishingly, we were getting network up there!

We covered the up hill trek in some 4 hrs, walking through the picturesque landscape on our right and the white heights on our left. By the time we reached Buddha cafe we were hungry out of our wits. We ordered some pahadwali maggie there and rested for half an hour before finally covering the remaining distance of 270 meters. We were told that Serolsar lake would be frozen, but on catching the first glimpse of the lake, we saw that it wasn't frozen. That broke our hearts, but we went on tho finish the trek, and I thank my stars for finishing it. The lake was indeed frozen, the water of only one-third of the lake was in liquid state. We went close to the lake, trust me if I say this, surreal would be an understatement for the beauty. We spent half an hour admiring the satin sheet of white snow and the lake before starting to head back, as it would be dark soon.

While relishing some mountain tea and biscuits we realized there's another frozen lake just behind us but a smaller one. We were stunned at the nature's play.

Downhill, we experienced the most beautiful of the pink mountain sunsets I have ever seen. I have throughout been a sunset person, and mountain sunsets are my favorite-most. As we descended further, we saw the ever-so-beautiful moon shine up above the world so high, guiding us through the snow to reach the end point of the trek. We sipped on some tea and booked a cab towards our hostel for Rs. 800.

A quick piece of local belief; on the way, lies this little temple, where drivers stop playing music because it is believed that the 5 km radius of the temple is very dangerous and has been a hub of several deadly accidents.

Once back, we were welcomed by a galaxy of stars and a warm bonfire. But, we were maniacally tired, so we rested for a while. After a light dinner, I, along with a friend of mine, while the others slept, stepped outside of the dorm. The temperature dropped to sub-zero but that didn't deter us from gazing at the star-studded night sky; we laid our heads on the ice-covered bonnet of our car and saw all the constellations we knew of, believed to have figured out Mars and a satellite as well; satisfied of our trip and memories made we rested for the night.

The morning was as beautiful as it was sunny. Before we started for a long drive back home, I painted our gang's patent hashtag, #ApunKiLadkiLog, with the month and date of our visit on the parapet of the door of our dorm. That's a norm of Mudhouse Hostels. We waved the place and the host good-bye and sweeped off taking along memories lasting a lifetime with ourselves.

The dusk falls amidst the mountain trees standing tall

Our stay, the Mudhouse Hostels

On the way to the waterfall nearby

Catching up the sunlight

The warming of the last sunlight for the day overlooking Jibhi

The majestic Pir Panjal at the backdrop

Pir Panjal at the backdrop 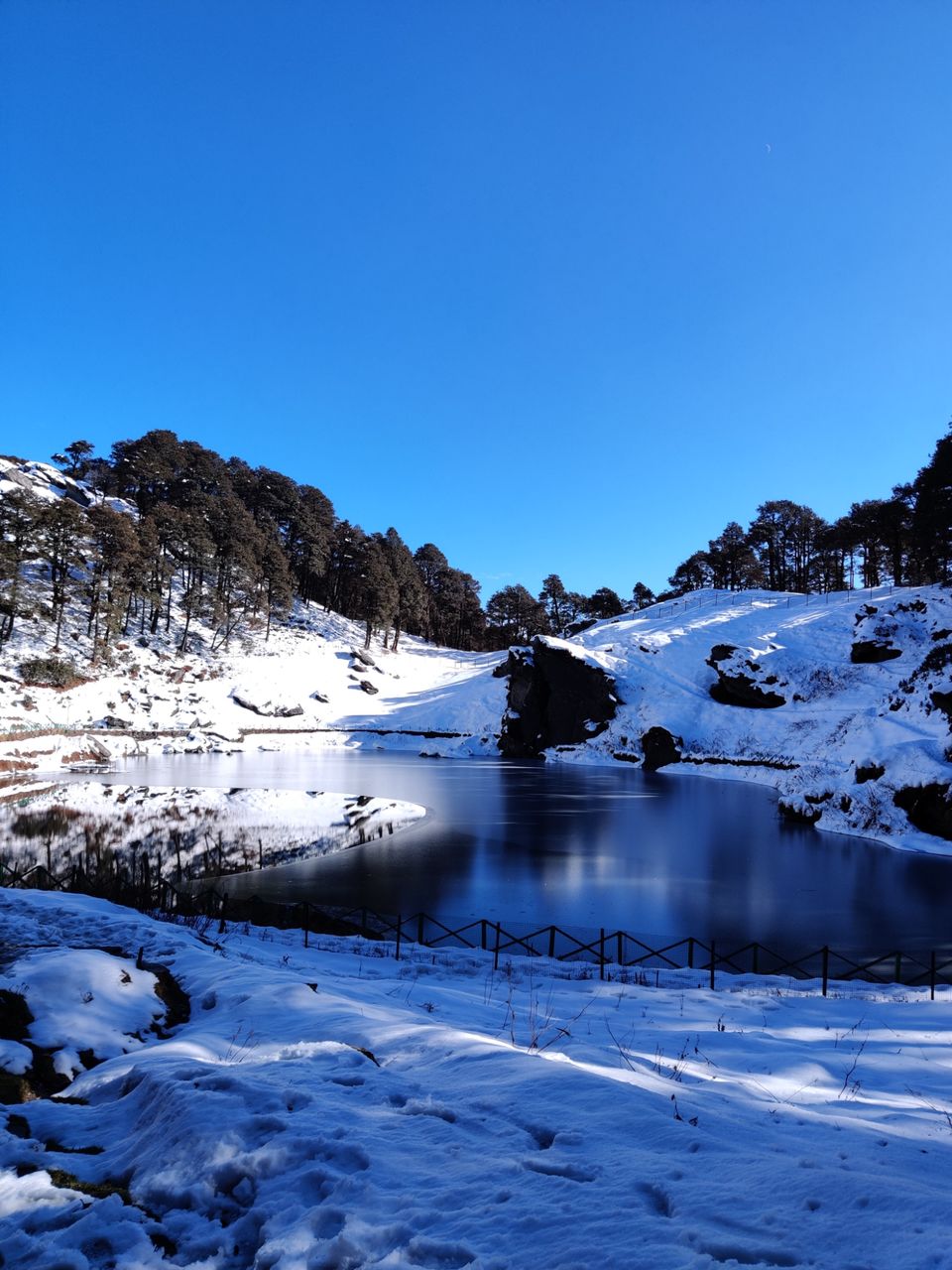 The satin sheet of snow

Dusk befalling with the pink sunset 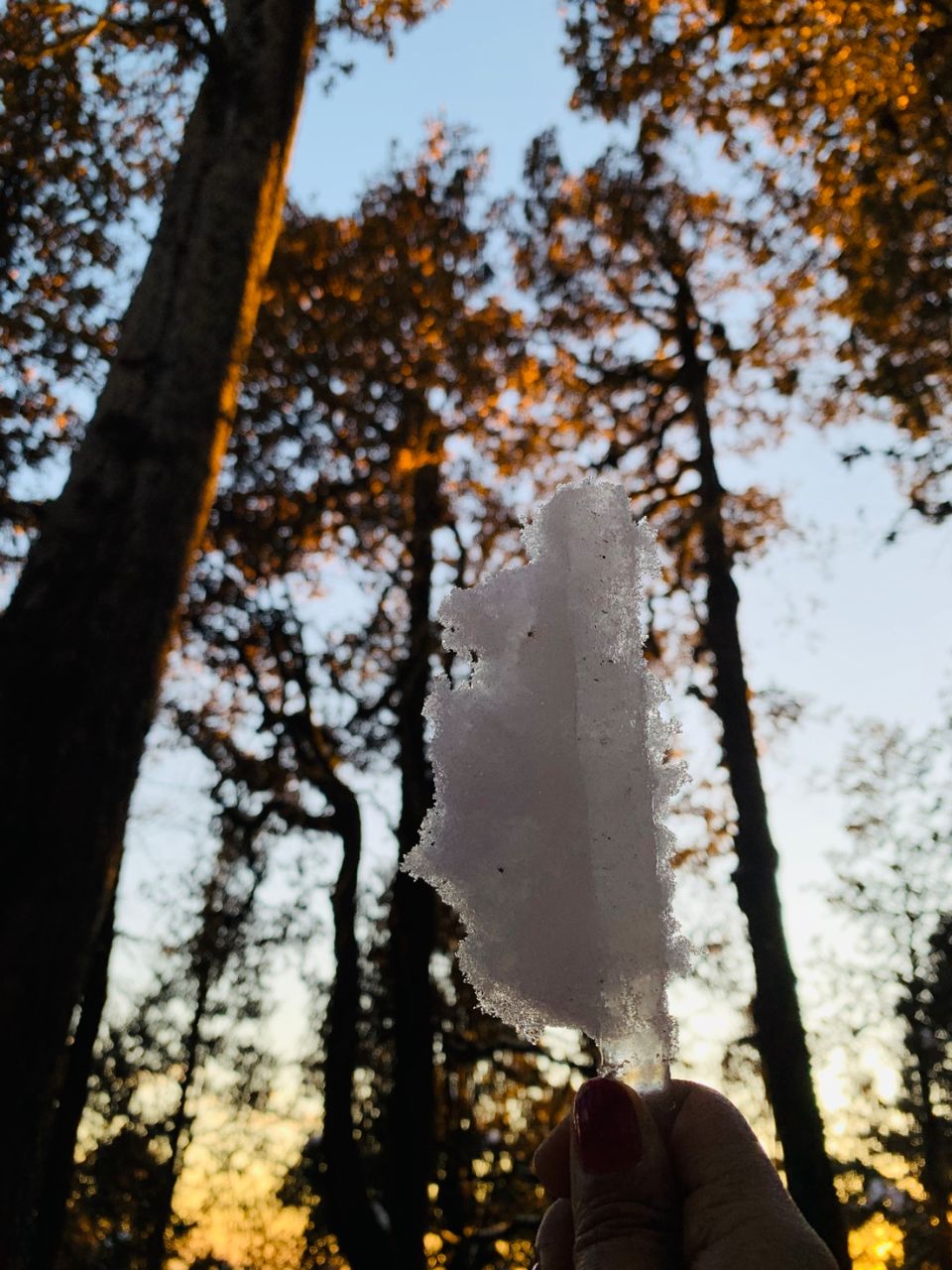 The moon and approaching night sky 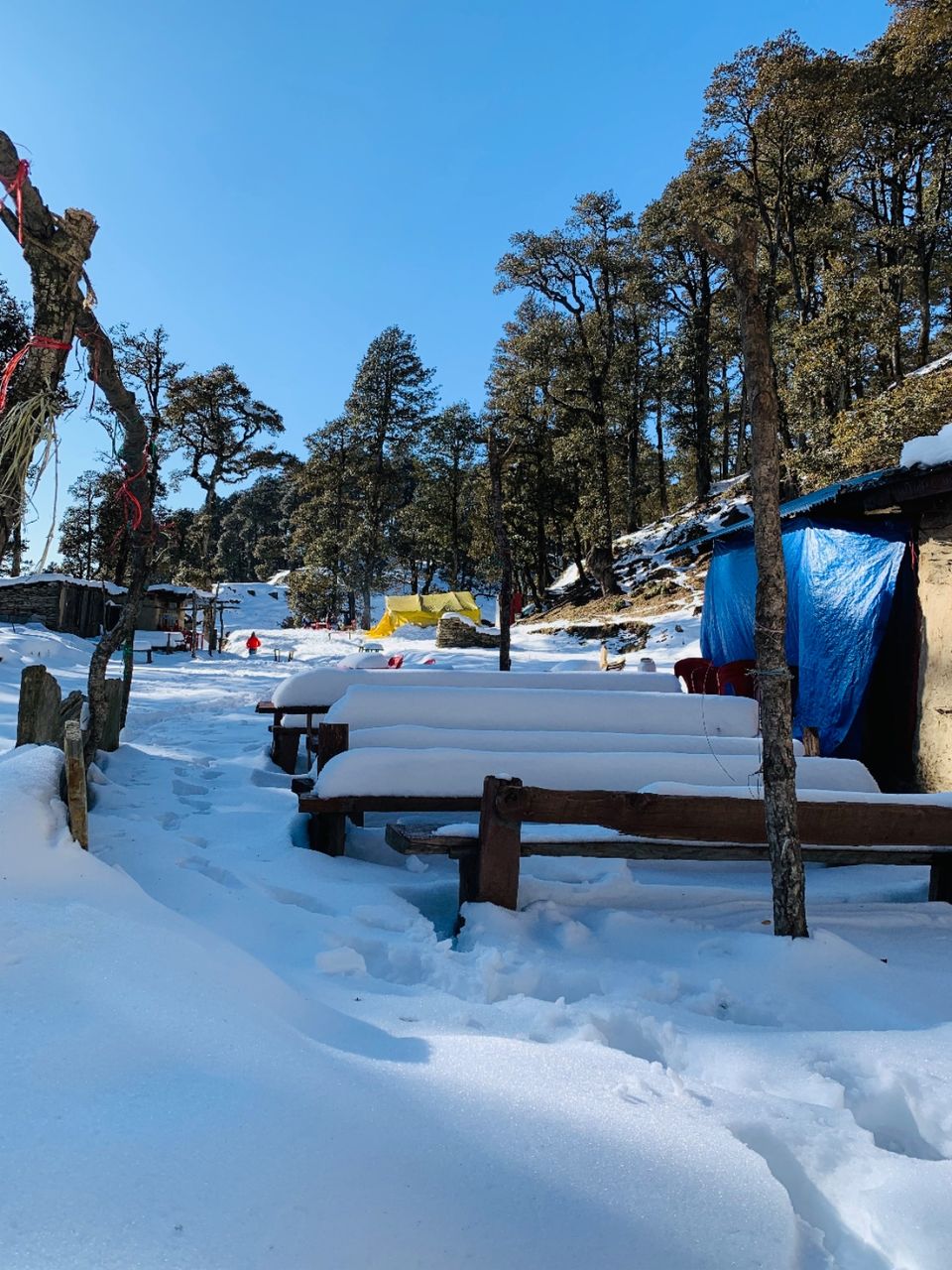 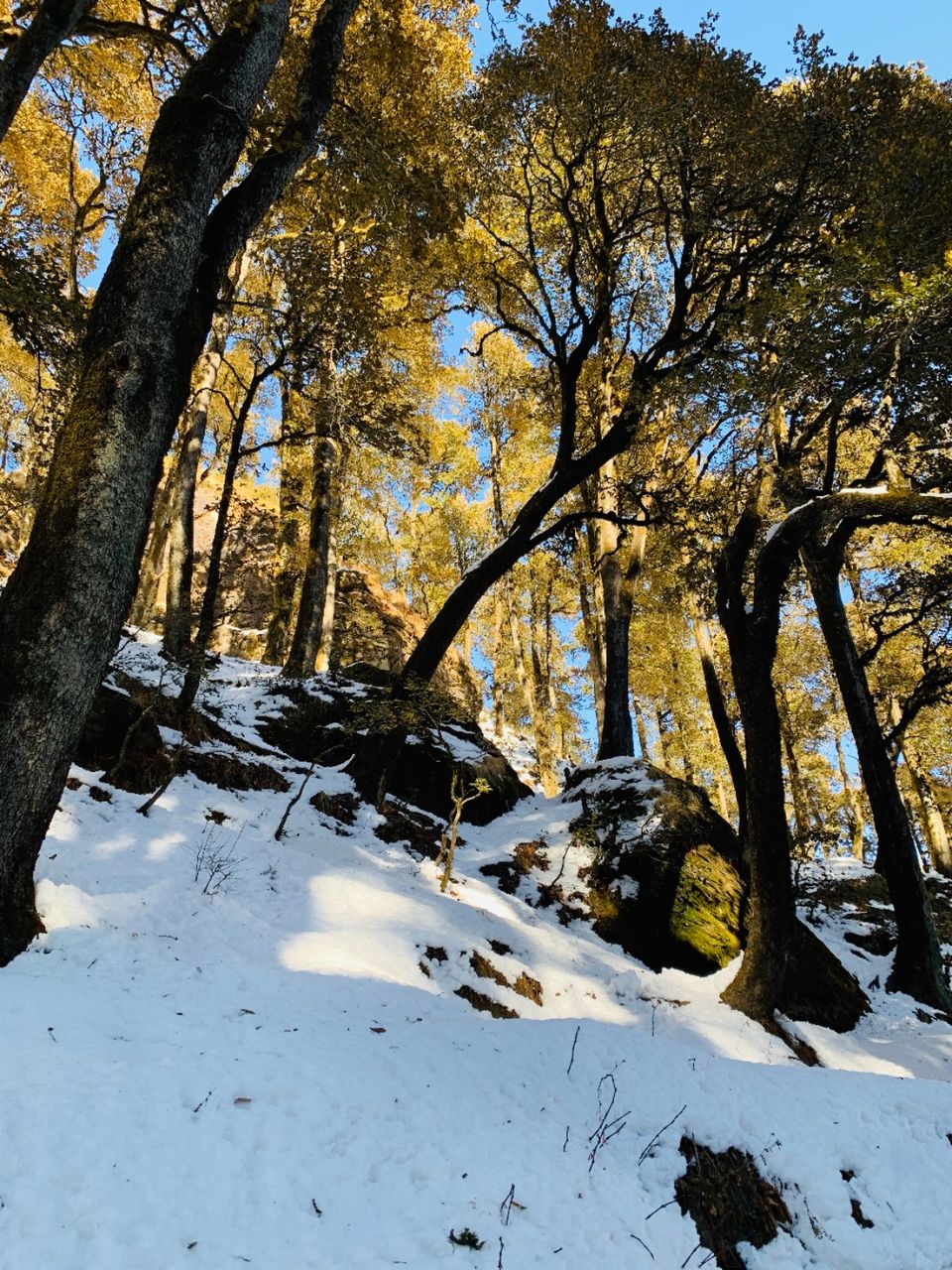