Rishyap, And The Best View Of My Life Yet

Rishyap, and The Best View of My Life yet 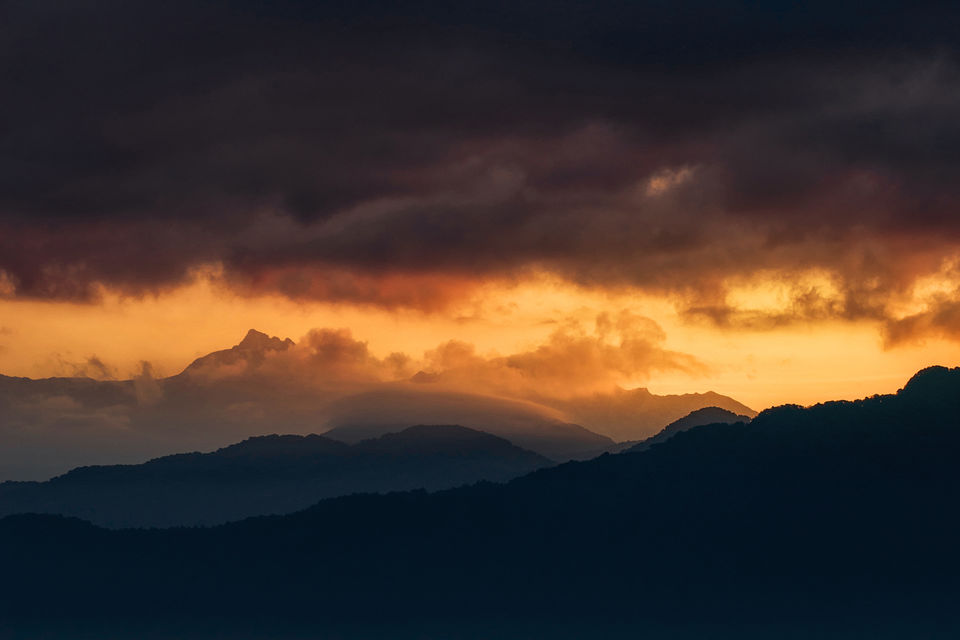 Bags packed, we go out for umpteenth time to try our luck to watch India's second largest mountain peak in the legendary mountain range. It had been utter failure due to heavy clouds and mist during the previous attempts. Destination this time: Rishyap.

Darjeeling Mail from Sealdah to NJP; tickets booked, car ready at NJP for pick up and we get the news that the train will change its route after Kishanganj and will take the alternate route to NJP via Siliguri. As soon as we came to know about this, we informed our driver to wait at Siliguri station for pick up and not NJP. Things went well so far and the next day, we get down at Siliguri station, and start our (quite usual) car trip to the lap of the Himalayas.

We left Siliguri at around 10 in the morning and the route decided was through Gorubathan. First major part will be Sevoke, after the military camps and the weather was fine (fingers crossed) with only a few white clouds. Sevoke has been a very common sight for us, since we travel a lot to North Bengal and Sikkim (at least twice a year) and almost every time, we go past this place, the Coronation Bridge and the beautiful sights of the Teesta River. After crossing Sevoke, we reached Dam Dim, and through that, we crossed Gorubathan and were a few miles away from Lava, our first and last break point, before Rishyap. There, we saw a wonderful view from the Zig-Zag View Point (according to GMaps) and clouds were starting to form heavily above us. Wetook a small break about 20kms before Lava for breakfast and there were heavenly momos @8 for ₹20. After the first intake, we realised there was a beautiful small stream alongside the little kiosk and we went down there for some pictures. After about half an hour there, we started again and didn't stop before reaching Lava. There was our first real stop for the Lava Monastery, which goes by the name 'Kagyu Thekchen Ling Monastery, Lava'.

Mesmerisingly beautiful birds started to grab our attention other than the wonderfully sculptured monastery walls and ceilings.

Finally, after about another hour there, and a total of four and a half hours from Siliguri, we reached Kanchan View Resort, crossing one of the most damaged roads for 6 kms, from a place named 6th Mile to Rishyap. Lunch was Egg Curry and Rice, and post that, we went for a little walk down the hills in search for the Rishyap Monastery. We found absolutely delighting views of sunset along the neighbouring mountains but no sight of the snow-capped ones, our main reason of visiting the place. We returned to our resort at around 6 in the evening. It was getting really chilly now and with almost no network and after a cup of hot coffee, we went out of our resort to the lawn in front and saw probably the most beautiful night-scene of my life: Villages and towns and cities from Pedong to Rishi upto Gangtok was visible and the lights made up for an Atlas view of North Bengal, Sikkim and parts of Bhutan as well. Endeavouring in vain to click some good pictures, we had chicken and roti in dinner and slept with the hope of seeing the mountains the nest day.

I had set the alarm at 5 am, since Sunrise was around 5:20am. However, my conscience rose even before the alarm could go off, and there I was, standing at the lawn of our hotel, looking helplessly at the horizon and finding only clouds. It was so devastating, missing out a chance to see the mountain from so close yet again. After about half an hour, the Sun has just risen above the horizon, and I am still looking at the clouds forming faded glows of orange and gold. All of a sudden, I see a golden coloured dot exactly somewhere far away, and it was too strong to be a cloud. I felt my heart racing as though I am winning a race by a good distance and the finish line is visible in front of my eyes. After a couple of minutes, there was another golden dot and the previous one has now converted into a small triangle. Yes! That's no cloud; that is Mt. Kanchenjungha. I am actually witnessing Mt. Kanchenjungha in front of my eyes in such a clear fashion for the very first time in my life. I ran in to call the others and came out in a second. Then, there we were, standing together for more than half an hour and watching the scenery slowly come out in front of our eyes. It was magical, let alone being the best view of my life. The whole Sleeping Buddha Range was now visible and, wait a minute! I think I had even seen another familiar mountain. Yes, it was the Nathu La Pass, and it is familiar since I had been to the Nathu La Pass twice before. And I could not have been more ecstatic anymore. In about an hour from the first golden dot, the whole range upto Dokalam (in Bhutan) was absolutely clear. It was like a white band of mountains in between the blue sky (with fluffy white clouds) and the clouded green mountains below. We stood there clicking and enjoying the view. No one was willing to go and have breakfast even.

After about another hour, when the clock was turning 8, we were informed that our car (you must take a car from syndicate there, it's a rule and you can't have your own driver wither) for the day's sight-seeing would be coming any moment. So, we had to go off, had morning chores and breakfast and then we went on for sight-seeing. First stop through that bad road and 6th Mile and Lava came to be Neora Valley National Park, a beautiful green nature camp full with birds and wild animals. A 14km journey from Lava through a road worse than the one from 6th Mile to Rishyap and we reach the start of a small trek (about a kilometre) for the Neora Valley. There was a guide, and he told us various incidents on our way during the trek. It was beautiful, we saw a good number of birds and no animals, except for one we saw while in car, and we couldn't figure out what it was - from among a panda, a monkey or an oversized cat. The Neora Valley View Point was the highest point we had reached in this trip, it was about a 100 feet higher than Rishyap. From there, we could see the whole range again, slowly getting covered by clouds and also, seeing various villages and towns and cities amongst the mountains between the range and us; there was Rishyap, Pedong, Rishi and also Gangtok. The road from the Neora Valley View Point extends upto Nathu La, as said by the guide. From Neora Valley, we went to Changey Falls, crossing Kolakham, and that trek was about another mile (but down first). It was a very hectic one since the steps were big and the Sun was shining brightly and the heat was pretty intense though the temperature was not high due to high altitude. It was almost impossible for us to not take momos from the adjacent stall from the Changey Falls entrance while we return.

During return, we had a break at Kolakham View Point and once at Lava. That was all for the day before we took dinner at our hotel back in Rishyap, and then spent some time under the stars and the Half Moon and the lit villages down.

I followed the same routine of last day, but the clouds didn't get as clear as it was. In the morning, I had gone for a lonely walk and saw (and captured) some beautiful sights, as the first rays of the Sun were falling on Dokalam and Nathu La (which were visible). After having breakfast we packed to leave Rishyap and tried to take another glimpse towards the direction we saw the majestic view the last day and saw a couple of the mountains (behind the clouds) and we were happy to see whatever we had seen in Rishyap. Other than the view, Rishyap is rich with beautiful varieties of birds and flowers. Almost all colored flowers were there in the hotel we were staying in. Breakfast was light since we had a long trip ahead, and we went down that trippy road from Rishyap to 6th Mile for one last time before meeting with our own driver.

So, this was our trip to Rishyap, long before Covid and other problems in life, when it was simple yet adventurous.