Shikwa Haveli
A Haveli just 75kms from Delhi, which transports you to the times gone by, with the most lavish
interiors, home cooked food ,the heritage grandeur to relax and rejuvenate…..and the most gracious
hosts! Sounds like a dream? It did, to me too, but we actually lived it and enjoyed every moment of our
stay there!
My restless spirit was always on the lookout for something different, so when my sister suggested we go to Shikwa Haveli for an overnight trip, though a little skeptical, considering the location, I decided to give it a try; and having booked ourselves for an overnight stay we three sisters drove down and watched with glee the concrete jungle giving way to the lush green fields and the beautiful countryside! The view lifted our mood but nothing prepared us to what we experienced as we drove through the majestic
gates to arrive at the Haveli. From the clutter and chaos we seemed to have stepped into an oasis, so
serene and beautiful, as if someone had plucked the entire building from somewhere else and placed it
in those rustic surroundings! The façade, architecture, the rooms opening into the central
courtyard….and the interiors we were yet to explore were all inviting, and we intended to make the
most of it in the 24 hours we had there!
After a refreshing welcome drink we were escorted to our rooms by the courteous staff. And we fell in
love with the room which was fit for royalty! The period furniture, sun filtering in through the sheer
screens tailor made for every window, the huge oval mirror standing in one corner…..and uff…the luxury
of sleeping in the huge four poster bed of solid teak! Of course that would have to wait for later, as we
put away our stuff in spacious wardrobes so as not to disturb the ambience of the room! We had our
own sit out, which was done up in African décor, and soon we realized that no two rooms had the same
interiors….which was even more fascinating! By this time we had already clicked loads of pictures….but
had to cut that short to have lunch which was laid out in the Burma lounge. The mystery of the name
was cleared when we entered the magnificent room for everything in that room, from furniture to
paintings and curios was from Burma! So this is what the world famous Burma teak looks like, I mused!
We decided to have a closer look later as the piping hot food was beckoning and the drive seemed to
have revved up our appetite! Homemade delectable dishes, my favourite kadhi chawal, baghare baigan ,
roasted potatoes, salads….topped by the famous balushahi of Baghpat! We overate, as expected…but
didn’t mind one bit, as we were here to relax and chill, and we were doing precisely that!
Just as we were finishing our lunch we were joined by our gracious hostess, the versatile owner of the
haveli. We talked over steaming cups of masala tea, complimenting her on the fine taste, the attention
to detail and the superb food made by her impeccably trained cook. But beyond the fact that the haveli
took almost 14 years to reconstruct and furnish, from the ruins they found it in, she refused to answer
any questions we had, telling us to have patience till evening when her husband would personally take
us around the place(there were other rooms too!).
Despite the fact that we wanted to stretch out, we couldn’t resist Alka’s offer to have a look at the
handmade linen she had trained her staff to make…. it was beautiful and exclusive and we all walkedaway with bags full of that beautiful stuff! It was almost evening by then so we decided to loiter around
in the small yet beautifully done up garden which offered a view of the open countryside. We took turns
to lie down in those inviting hammocks and gaze at the sky gradually changing colours and the clouds
drifting by….where else but on a holiday can you indulge in such luxury! As we caught sight of the first
star twinkling on the horizon we decided it was time to get up and freshen up for the promised tour of
the place, but not before a photo session ….wo to banta hai na..we chorused!

Being the only occupants that day was an advantage we enjoyed to the hilt as we moved around
without inhibition selecting every nook and corner which took our fancy for the photo op! The staff too
melted away discreetly so we were on our own for all practical purposes! Time literally flew by as we
trooped into the Burma lounge for our meeting with the owner of the haveli. While we waited I could
not resist trying my hand at the pool table right next to the exotic bar! Our host materialized right on
time and we knew it would be an interesting one hour in his company! The mystery of the curios from
all over the world was solved when he told that he had worked for the UN and had collected them over
the years during his postings to all those places. Vow….were they exotic!

We couldn’t believe when they showed us the pictures of the place when they had got it! It was actually
in complete ruins, and it was truly commendable how they had transformed it in 14 years to its present
state! Having lived here as a child he had recollections of how the place looked like earlier, so every
room was reconstructed from memory, doors crafted, some walls, including the one in the lounge with
carved niches left standing the way they were while others built from scratch! We were taken to the
rooms generally kept locked and opened for special guests only, while being regaled with anecdotes and
our queries patiently answered. That we were awe struck by all that magnificence would be an
understatement!

Each room had a character, the décor, furnishings, paintings from the very place after which the room
was named. Turkish carpets, period furniture, the tableware all added to the aura and magnificence of
the haveli and laced with their love and dedication the Haveli became more than just a place…it was a
living , breathing entity with a character of its own!
By the time we finished the tour the dinner was laid out in the courtyard, complete with candle light and
the fruity punch was just the drink to kick start the evening. There, beneath the canopy of bright stars
we leisurely had our dinner , soaking in the ambience and just chilling out in the fresh country air! The
dinner cooked to perfection, no hurry to wind up as we laughed and talked and felt carefree in those
beautiful surroundings!
It was almost midnight when we decided to call it a day….after all the luxury of sleeping in the four
poster bed was yet to be experienced, and we intended to make the most of it! We were asleep as soon as our heads hit the pillow and we slept like logs, getting up late , taking our own time to get ready ! We went down for breakfast of my favourite aloo poori, washed down with steaming cups of tea, already feeling sad that we would soon be saying goodbye to this timeless gem! We enjoyed every moment of our stay, and had
captured precious memories on our cameras, to be enjoyed later too! 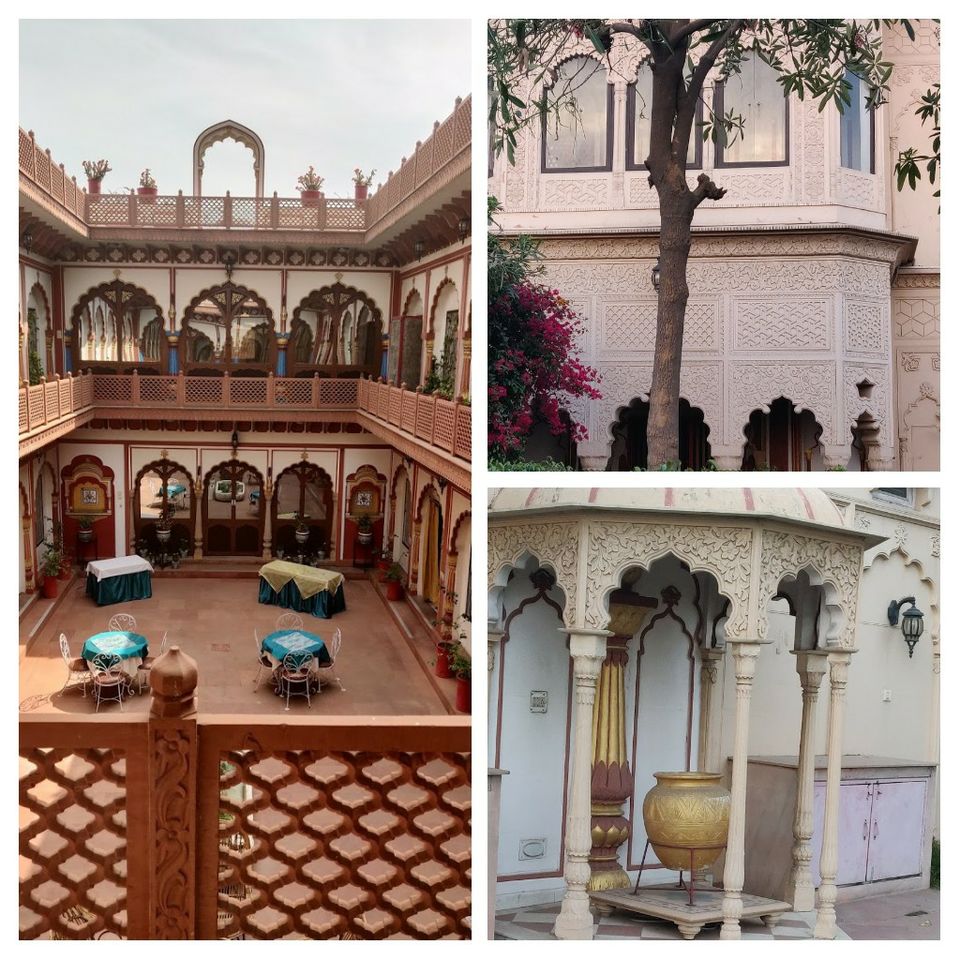 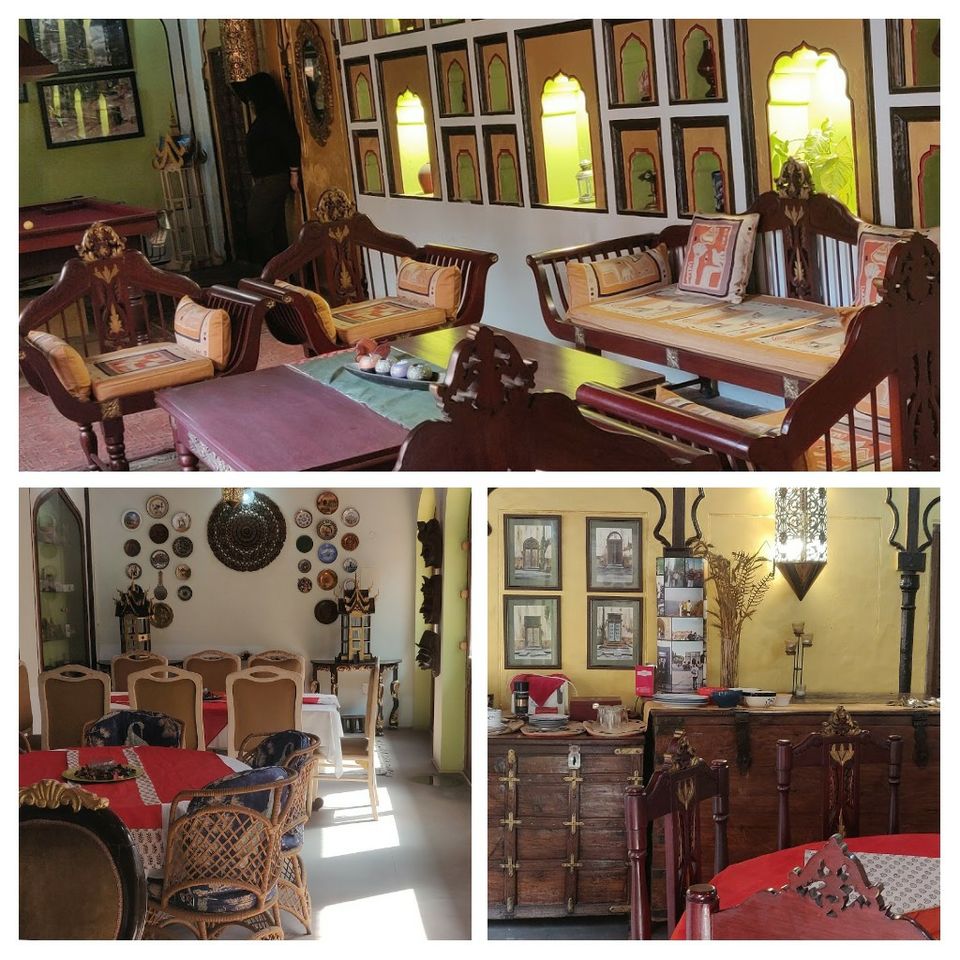 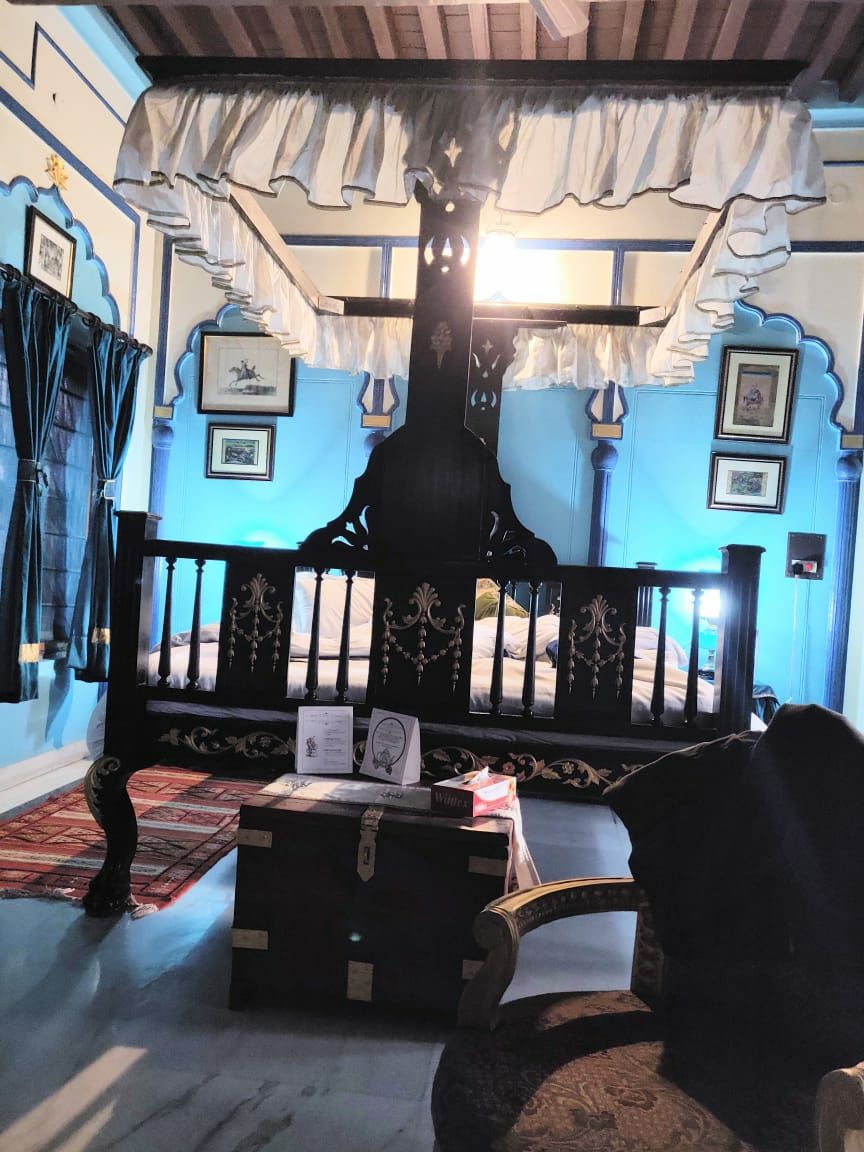 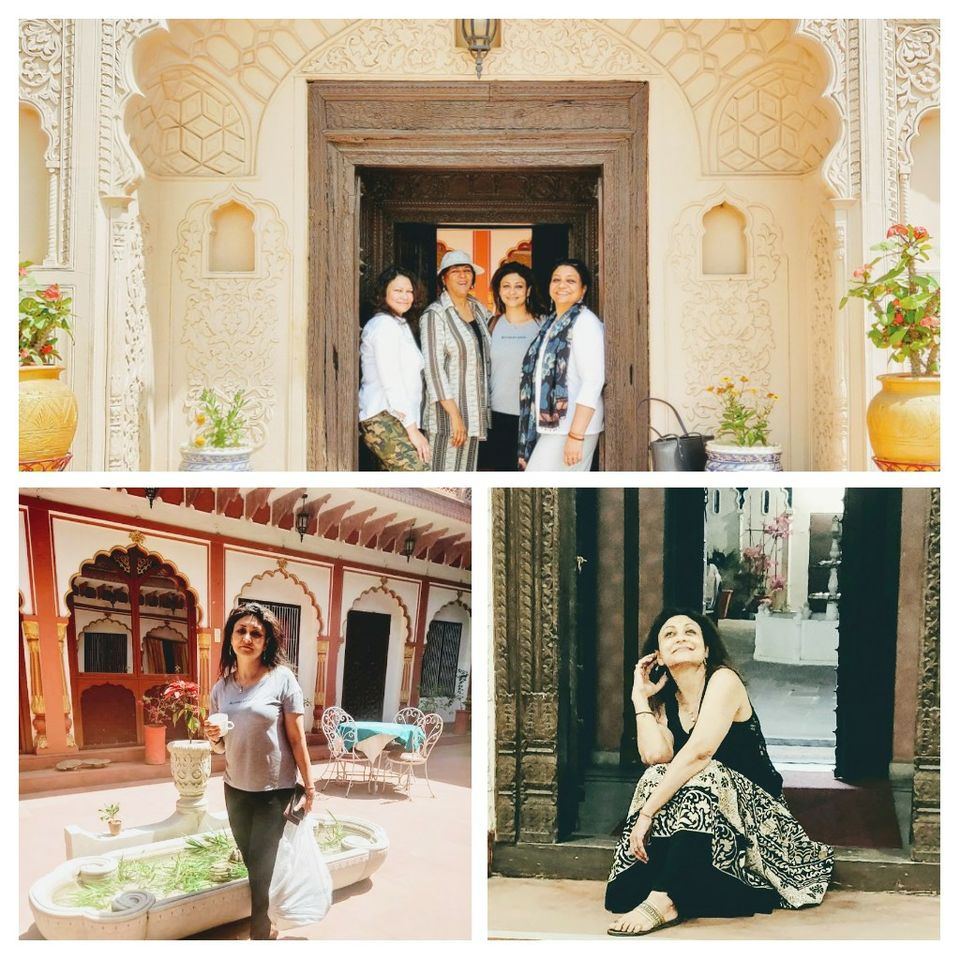 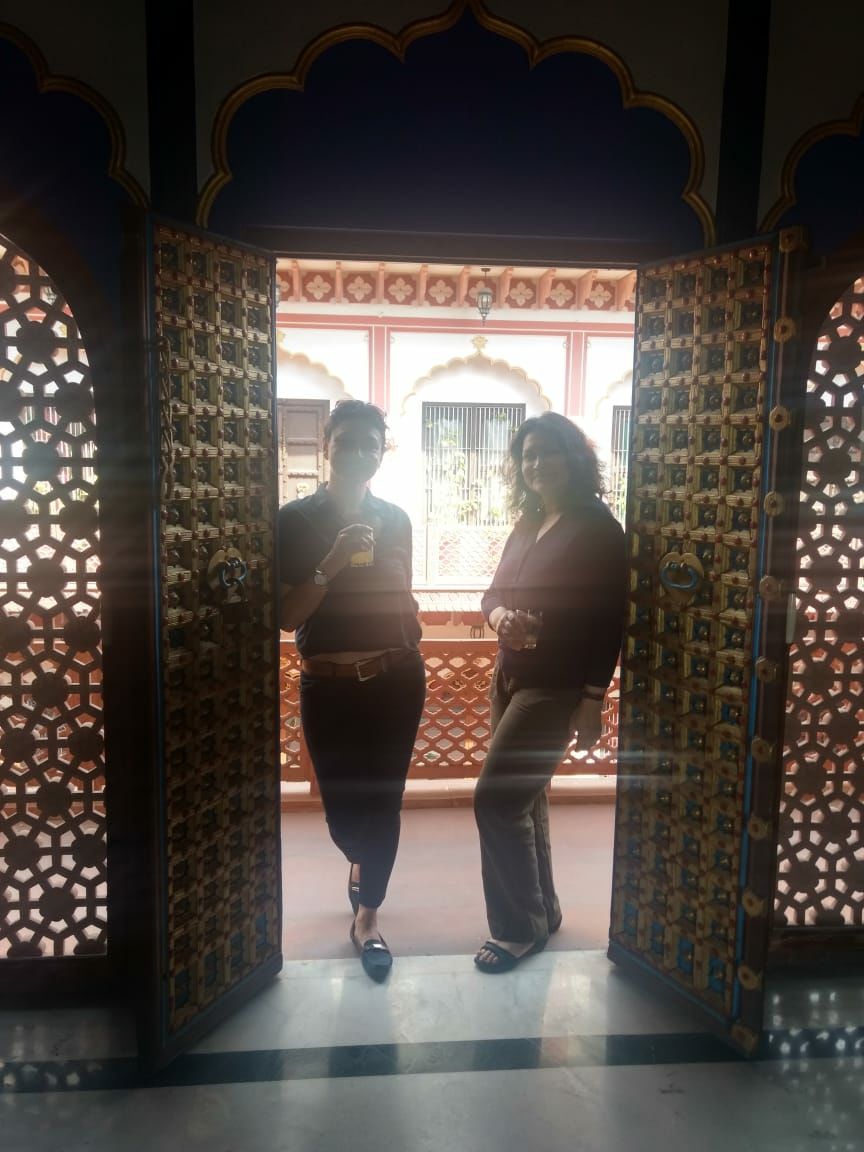