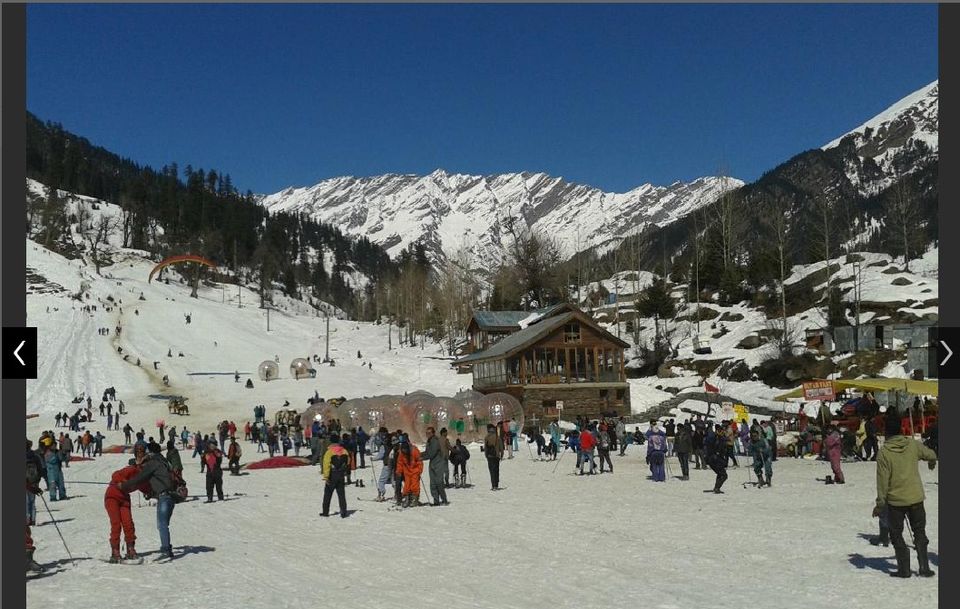 Solang Valley, also called the mini Switzerland by some, is located at distance of 14 kms from Manali.It is connected by snaky roads which offer plenty of peek-a-boos of snowy mountains flitting in and out of mist.And truly the place did remind me of 90s bollywood movies with the exception of saree-clad heroines crooning duets with cold-immune midriffs.A sloping expanse of such blinding snowy whiteness, that the eyes feel confused whether to widen with wonder or  narrow to avoid glare.To address the latter issue, one can find locals peddling counterfeit Ray-Ben eyes shades. There is something empowering about mountains.They make you feel a kind of omnipotence as you look down upon the valley,the gigantic intimidating edifices looking like miniature toys from the great height.Guarded by the hills on all sides, I felt free and yet protected as though I were an all-commanding emperor and these collossal rocky walls ,my faithful fortress.
The sun played hide-and-seek with the clouds,the weather alternating teasingly between freezing cold and warm.The wind sang its own song and coniferous trees swayed like audience nodding to the great music.The playfulness of weather infected everyone.Some middle-aged men and women  were throwing snowballs at each other and having real good fun,a word that had  slowly gone missing from the  lexicon of their everyday lives.Young lovestruck couples clung on to each other on the pretext of cold, their faces flushed from cold and -what shall we say-romantic stimulation.

But for the adrenaline-hungry thrill-seekers, there was a variety of adventure sports on offer. Bustling with paragliders swooping down like vultures threatening to decapitate your head,snowmobiles ready to run you over and Zorbing balls remiscient of snowball avalanches, this was nt't for the faint-hearted!
But the daredevils like me were licking their lips.
So,I gathered courage and began to trudge uphill to the jumping point for paragliding. Walking with long strides,head high and chest inflated, I felt like Edmund Hillary on his way to conquering Everest.

It was then, that it happened.

An over excited glider waving his hands in mad jubilation, headed for landing..
He was coming closer, second by second.
Too close.
And whoosh!
A gust of wind rush past my face and I ducked just in time to avoid being beheaded.
The guy landed just behind me, still waving for the cameras, oblivious to my fright.
Traumatized, heroism gone, I literally had to be  pushed off the cliff by four guys who being on lighter side, I, being on the heavier side and wind blowing against our side....well you know. But then flying was a surreal experience, the wind whistling in my ears, caressing my face , the lightness in my weight, in my heart. The years fell way and I was a little boy again, shouting with joy.
I know how the birds feel now. After this feat of bravado ,in order to calm my excited nerves and my even more excited stomach, I began looking for something to eat.
And guess what I found?
MAggieeeee!
Its inexplicable to articulate the joys of having the good homely noodles at 8500 feet.
Ah! how those long thin yellow worms satisfied the rats in my stomach.
Pure bliss! After the meal, a kind of peace descended upon my being,and I headed to the rope way  to Mt. Phatru to find some solitude.
Unlike the valley which was specked with footprints all over, here the snow was completely untrodden.
I felt like Robert Frost walking the road less travelled while admiring the frost (pun intended ) on leaves.
There is a reason, nature inspires poetry and then I knew why.
And I  began to compose a few lines:

"I stomp my way through the snow
So in the afterlife, I will know
Wandering the earth when I find
The pair of footprints, I left behind
In the place ,I walked in flesh and bone"

And I just sat there,basking in the afterglow of wanderlust culminating in an orgasmic journey