The Wintry Wonderland Of Himachal

The Wintry Wonderland of Himachal 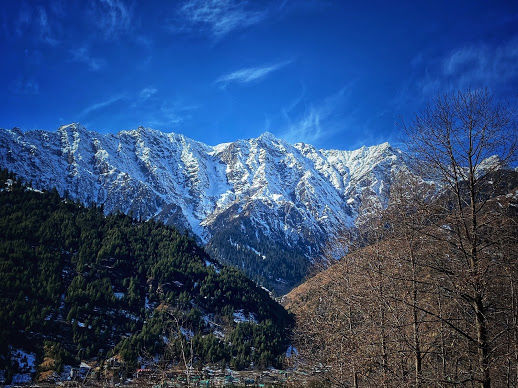 After Dharamshala in 2016, it took me exactly 4 years to go back to my favorite state and this time I was travelling to Jibhi and Manali. Tired of working from home and definitely not being the kind of person who likes to stay at home for long periods of time, my feet were itching to go out and I was craving for some snow laden mountains.

I was looking for a trip to Himachal and the Photographers of India presented one in the nick of time and I grabbed it swiftly. There were a lot of questions, is it safe to travel, what will be the restrictions due to COVID-19 etc. but I was not worried about them, all I wanted was to get out and I was already counting the days. This time I was not completely alone, as my friend Sahista was also joining me on this trip.

I had to undergo the COVID test before leaving from home as it was advised to get it done just to be on the safer side and only God knows how much I hated those 2 seconds of agony. The result came out 'negative' and I was ready to witness the winter wonderland of Jibhi and Manali. We were supposed to reach Chandigarh on 27th December by 9 PM, so it was decided to take the train from Delhi only.

We boarded the Jan Shatabdi from New Delhi Railway Station in the afternoon and reached Chandigarh in the evening. The city welcomed us with extreme cold and rain which made me wonder about the temperature up in the mountains. On reaching the boarding point, we found out that due to heavy traffic the travelers have not yet arrived, so the only option was to wait it out. We had taken shelter outside a hotel named Sunbeam and thanks to those guys for not asking us to go away, as after sometime it seemed to look like a refugee camp. Finally, after waiting for more than 5-6 hours, the tempos came and we were ready to leave the lovely city of Chandigarh. The journey started around 2 in the morning and I decided to get some rest and fell asleep.

After a long drive and a couple of stops, we reached the mesmerizing hamlet of Jibhi situated amidst the lush green forests and surrounded by beautiful mountains in the afternoon. Well! It was not that straight forward, actually we had just entered the town and due to immense snowfall the previous night, the roads were totally blocked and were being cleared. Meanwhile, it was decided to explore the Jibhi Waterfall which was nearby, the temperature was dropping by every passing hour and we were presented with the first glimpses of snow.

To reach the waterfall, you have to take a short 10 minute walk. The place is neatly done with lovely arched wooden bridges made over the streams which are fed from the waterfall itself, the waterfall is tucked inside lush green jungle and the soothing sound of streams and the waterfall makes it even more precious.

After a short photography session, it was time to head back. We were informed that our tempos won't be able to go ahead, as the road was too slippery for them. Consequentially, a pick up truck was arranged for us and we had to hop on the trolley of the truck to reach our hostel.

An adventure was unfolding in front of our eyes, we were 7-8 people standing in the trolley holding on to each other. The climb started and in some time we came to a halt as one portion of the road was way too risky for the people coming down on their cars and bikes. A struggling trio of bikers were trying to get their Royal Enfields downhill, 3 people holding on to the bike and still falling down, gosh that was scary. After letting the traffic pass by, we started again and accidentally our pick up went inside a side drain and we had to push it. It was so slippery for us that we were falling down while pushing the truck but finally we made it and again hopped on. The climb was getting steeper and we were holding on to our dear lives because on our right was a deep gorge full of snow covered Deodars and if you fell, well that will be the end of your story.

It was 5 PM, the light was dying and we eventually reached 'The Hosteller' after all the struggles and hassles. Our bags were yet to be delivered to us, as taking them with us on the pick up truck was not possible. We got our rooms and mostly everyone fell on their beds, it was a very cozy and a comfortable stay. After freshening up and some rest, we went downstairs to the cafeteria for dinner and there we had a short introduction session. The dinner was done and when most people had decided to call it a night, myself and some friends decided to go out for night photography, the temperature had dipped to -6 but photography is love. We clicked outside for an hour and Sandip, (the Director as I call him) was giving us some tips and tricks. That was a great and a freezing night but we ended up with good pictures. Now, it was time for shut eye and much needed rest.

We woke up to a pleasing sunny morning and after some tea and breakfast, it was time for a hike to Jalori Pass. We started the ascend at 1 PM, it was at a distance of almost 5 kms from our hostel so it did not seem like a gigantic task. We started walking, making our way through the snow covered roads, the view was majestic, it felt like the mountains were embracing the valley. The snow started getting heavier on the road and it was getting difficult to walk, again the same pick up truck came to our rescue and we hopped on to reach the top.

Jalori Pass is a high mountain pass at an elevation of 10280 feet above sea level, nestled in the peaks of Northern Himalayas. It is a sight to behold and there is a Mahakali temple at the top known as Jalori Maata and some small restaurants operated by local folks. We reached the top and had tea because we were freezing and started clicking pictures and exploring the place. I certainly cannot miss out the lunch we had, steaming Rajma Chawal, oh boy! It was so delicious.

The daylight was dying and it was time to head back to our hostel. The descend was great fun, everyone was singing, sharing stories and most importantly slipping and falling down. We came back to the hostel by evening and after some rest, we were back at the cafeteria chilling with everyone.

Jibhi was so alluring and tranquil, it is the place where your thoughts will be at peace, away from the hustle and bustle, you will appreciate or at least learn to appreciate the beauty that surrounds you.

The next morning, we had to start the next leg of our journey and the bustling town of Manali was waiting for us with more adventures and lesser temperatures. We bid adieu to Jibhi in the afternoon and were set for another 4 hour journey to Manali.

Traversing through the gigantic mountains, we reached Manali by 4PM in the evening and it was jam packed. The town was bustling like the entire population of India had come there for vacation, who says we are living in a pandemic world. We got off at Old Manali Bridge which separates Old and New Manali and from there we had to walk with our backpacks to The Orchards House - The Hidden Tribe.

The place is calm and serene, nestled away from the streets of the town, you will get to see the mountains jubilantly beaming at the valley.

We retired to our respective dorms to get some rest and then decided to head out to explore the streets of Manali. It was so crowded that after wandering around, we settled in a cozy looking café called Café Melange for some snacks and after a short shopping spree, we were back to our hostel. The bonfire was ready and temperatures had already dipped to -10 so, naturally everyone was sitting around the fire chatting, eating and drinking. We came back to our room well after midnight and it was time to sleep.

Next morning, the Jogini Waterfall trek was waiting for us and after some tea and breakfast, we left for the next adventure.

We were ferried on our travellers to the base point and from there it was just an hour long trek which seemed easy but I didn't know that my shoes will be failing me badly. I was not even able to get a proper grip at some places due to snow but after struggling for a while and getting some assistance from my fellow friends, I finally found my feet. Also, going back was not an option for me and the only way was up! The view was spectacular and it raised my spirits as we continued climbing through snow, mud, trees and what-not.

After an hour long arduous trek, we finally reached the top and the 150 feet high waterfall was in front of us. We made our way through some freezing streams and found a spot to click some pictures, drones were flying, people were posing in front of cameras, overall it was a fun little place. We filled our water bottle from one of the streams and that was the most delicious water I had ever tasted.

After the photography session, we started heading down to the base and had some refreshments. We came back to the Mall Road and it was time for some proper shopping. The Mall Road was immensely crowded as it was New Year's Eve, even walking was difficult for us and yet again these are 'pandemic times' we are living in. The shopping was done and now we were back at hostel for the new year party and the gloom of the trip ending was already looming over me but despite that I was content. That was the last night of our trip and everyone was chilling and celebrating the arrival of 2021.

The next morning we started the journey back home and that was altogether a different story.

Before this trip, I had decided that this will be a leisurely trip for me but it turned out to be one hell of an adventure that I will remember forever. And before ending this tale, a big shoutout to all the people who joined this adventure, you all made it lovely and I certainly cannot miss to mention my crazy roommates, a bunch of totally crazy people. Sahista! I seriously hope, you had a great time and now you know why I love Himachal so much, and thanks to 'Photographers of India' for this much needed getaway.

I am writing this from home but deep down I know, "Mera Dil Kahi Door, Pahadon Me Kho Gaya."

Till the next Adventure, Keep Travelling and Keep Exploring!