TRIP TO KHANDADHAR: THE MIGHTY FALLS 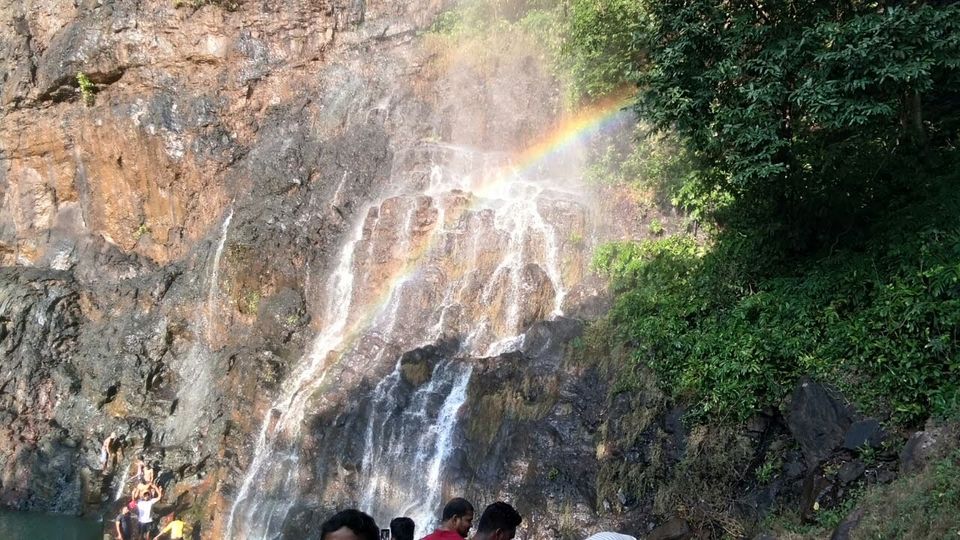 As the bus traversed through the sunny lanes of Kendujhar, we crawled our necks outside the windows to catch a glimpse of the trail ahead. The journey had started from Bhubaneswar at 2 in the morning and had taken a break at 6 when we reached Tarini temple of Ghatagaon. The halt was spine-wrecking as the chilly winds bore no mercy upon us. The climate at the capital was a little over fifteen degrees whereas Ghatagaon hosted the most ransacking experience of the year serving as a cold host for the day, at a drop below nine. Serving our taste buds with a garam chai ki pyali ushered in as a welcome change. Refreshed and relaxed, the journey to the spotted terminus commenced at 10.30. The day had turned warm and pleasantly sunny, so that some of us dozed off. But most of us believed in living the journey as well as savouring the destination. Sleep was a far fetched word for me, in particular.

The Khandadhar hills swayed past us with smiling curves and blind turns, and had a cascade of waterfalls to offer. The first was Sana Ghaghra, popular and top-notched, designed and decorated by parks and a number of taking eyes, followed by the less flavoured Bada Ghaghra. But the pilot of what the falls can offer was hinted upon by the least choosen, Handibhanga falls, en route to the Khandadhar falls. We arrived at the sorted spot at 1.30.

Then began the third phase, wherein we had to go for a mini trek upto the falls, spanning a three kilometer length, uphill. The hilly slides on the right were bustling with greenery while the left view was overwhelmingly frightful. The sharp edges descended almost immediately. The aching tiredness was mounting up with every passing moment. The systems churning and screaming for a spare surrendered to the hearts brimming with excitement won, each time. The scene was remarkable, in nutshell. But that was nothing more than a handful before the picturesque expanse that awaited us.

The coolness of the aura had been hitting us from a stretch away, rejuvenating our anguished bodies. The catch of the first speck of water hitting a rock revitalized our souls and sharpened our excitement.We took to the steps as the view got larger. A step to the last step, lo and behold. The sword from heaven struck upon an artist’s imaginative flow and the junction was mesmerizing. I peaked there for a while, gulping in pounds of excitement.

Below my gears, steps jumped off, running into the sprawling waters which surfaced the falls. The periphery was further widened by them. The rocks surrounded, towered and transfixed as if to support the wavering spirit of water. It has a smoke-like appearance created by the spraying water as it sweeps down the rocks. Beyond the gaze, a gushing sound followed by a heavy throw of water, sprightly and sword-like, smote an aligned surface, and plunged into the lake-like store, imposing a heavy angle. The sun shone bright and hit the juncture hard, and the congregation innovated a rainbow, which danced every now and then in oscillations. The aqua stature was so high that droplets of splashes flipped and moistened us though being distant enough to catch the full view at one stare.

Down went we with the tang of water, absorbing the frigid air that hit us. The last step, with its watery shores, was magnetic and magnificent. As we looked up at the heavenly form, we realized that the scene was the best of my visits. Standing stagnated, I spent two hours at the bosoms of the rocks.

The walk past the path was no longer flagging. We returned with a breath of fresh air, embedded with a lovely experience. For nature lovers, this place is a haven.