It was my second time in Jharkhand. Just a month ago I visited Ranchi and I was so mesmerized with the beauty of eastern India.
On 15th October on the eve of Bijoya Dashami I took the train from Howrah Station to Ranchi .  Howrah-Hatia Special train dropped me at Ranchi around 6 am. The Ranchi Railway station is so clean that one can easily freshened up there. So I did the same and set in for our destination to Netarhat.
Netarhat is almost 160 km away from Ranchi and it took around 4 hr to reach there. I reached Netarhat around 12 noon and meanwhile I had my breakfast and lunch on the way.
Just 30 min before reaching Netarhat one can start to feel the actual beauty of Chotanagpur region. The valleys, the narrow water streams, amazing views and the beautiful greenery stole my heart.
The driver suggested me before checking in the hotel we should do the sightseeing first. So we first visited the Chalet house  in Netarhat. It is a very old house made entirely of wood. The garden attached to the house is also very beautiful. I must say the weather and the texture of the sky was too much gorgeous that day and it added some extra beauty to everywhere. The Chalet house contains many paintings and it also conserves the material used in British period.
Our 2nd destination was Netarhat School, one of finest school in Jharkhand also in India. It produced many IAS, IPS officers. But we were restricted at the School gate so had to satisfy ourselves by visiting the School building only from the outside.

Next destination was Upper Ghagri falls. Though we stopped in the middle of a Pine Forest. Omg!! I cannot explain my feelings in this writing. The Pine forest was so amazing. The light breeze with the rustling of Pine leaves made my day. After spending some time there finally we arrived at Upper Ghagri falls. The  path to the waterfalls was a little bit tricky.  But somehow I managed to get down to the waterfalls. It was a tiny stream of water though velocity of the stream was not so less. It was a average experience.

Then we moved to Koel view point. The place is called Koel view point because the Koel river can be seen from the top of the view point and the entire valley can be seen from the top on a clear day. On that bright sunny day we are able to see the entire view from the top. Along with that there were also a forest there and it was more beautiful than the pine forest.  Spending a lots of time there then we visited the Netarhat Dak Bunglow. It is one of the best place for staying in Netarhat.
Finally our final destination -  Magnolia Sunset point. There are some stories I had heard about this place. Magnolia was daughter of a British High Ranked officer who fell in love with a local tribal boy. They couldn't understand their language but could feel their love for each other. One day her father heard about their relationship and could not endure and as a result the tribal boy was murdered. Magnolia did suicide from the sunset point. So this sunset point is dedicated to Magnolia and this name has come - Magnolia sunset point.
From the sunset point the Chotanagpur plateau can be seen clearly. A lots of people gathered to experience the lovely sunset. With those lots of people I ended my sightseeing of Day 1 at sunset point.

Checked in Hotel Ravi and Shaahi around 6 pm. 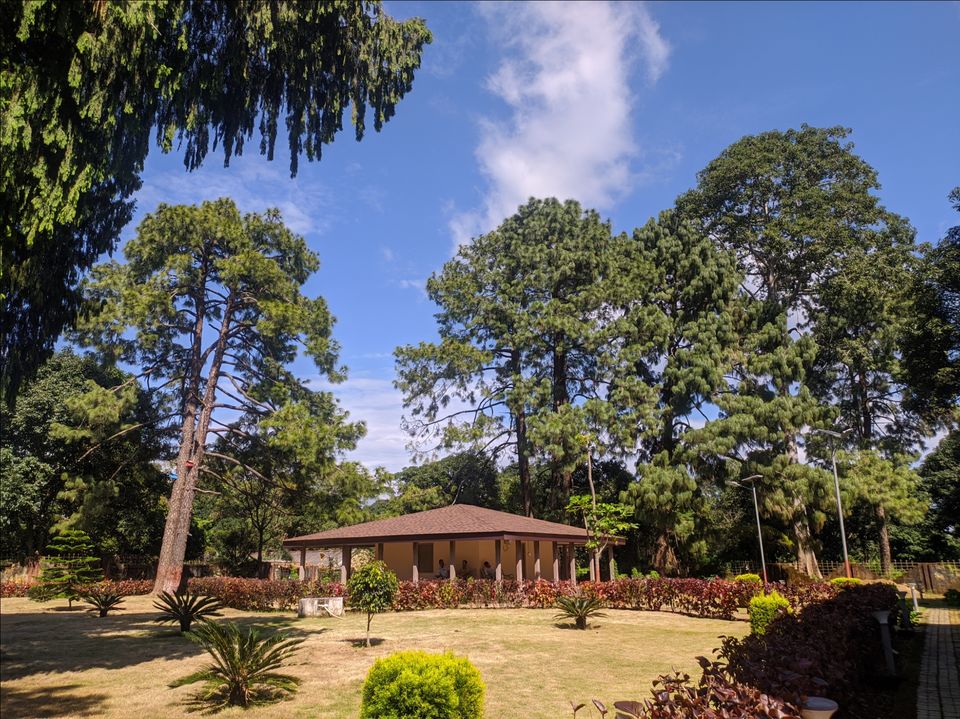 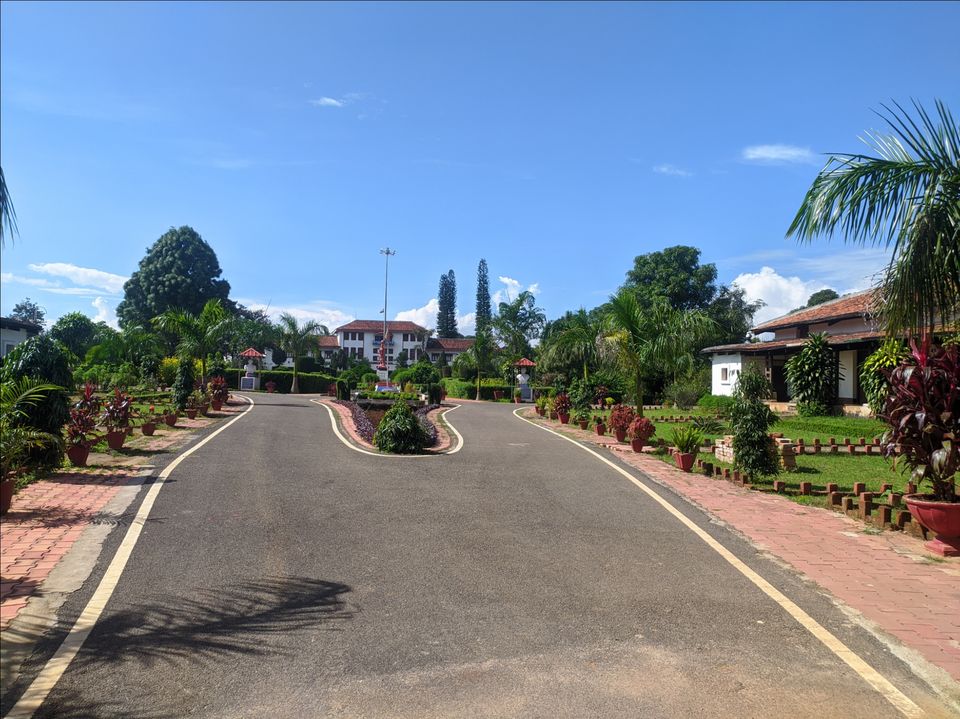 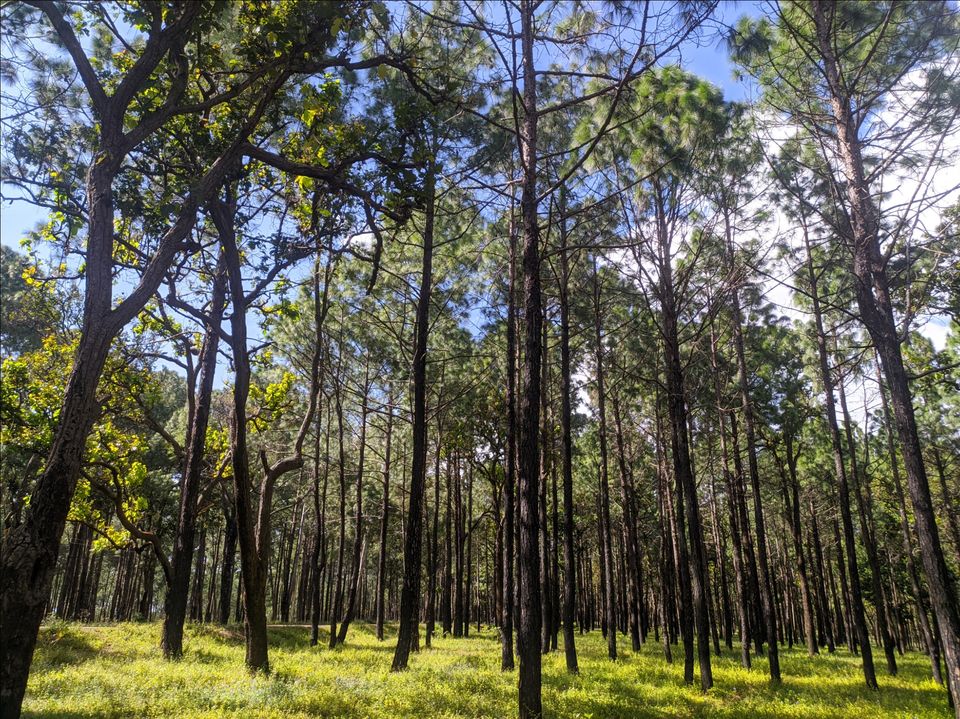 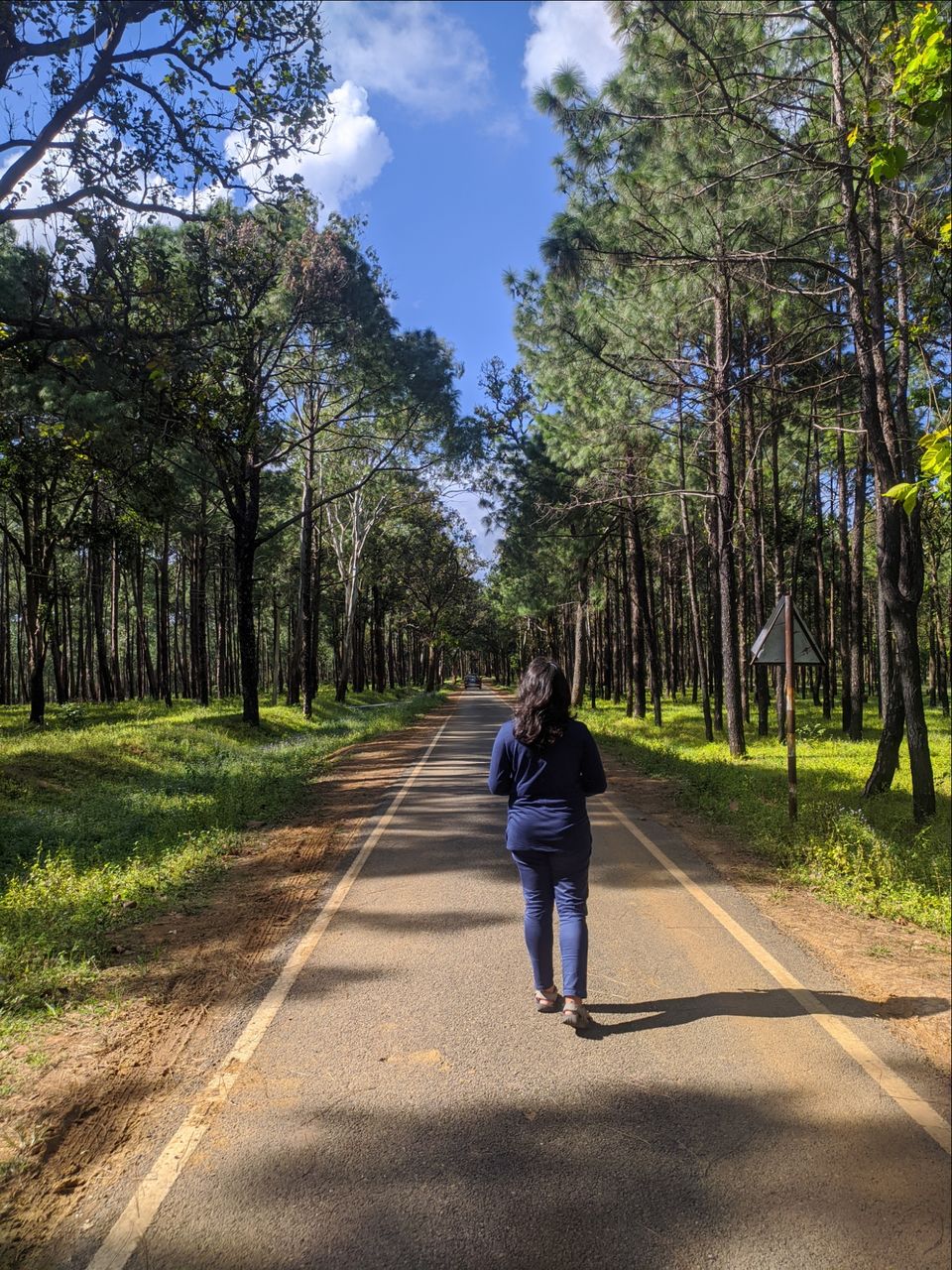 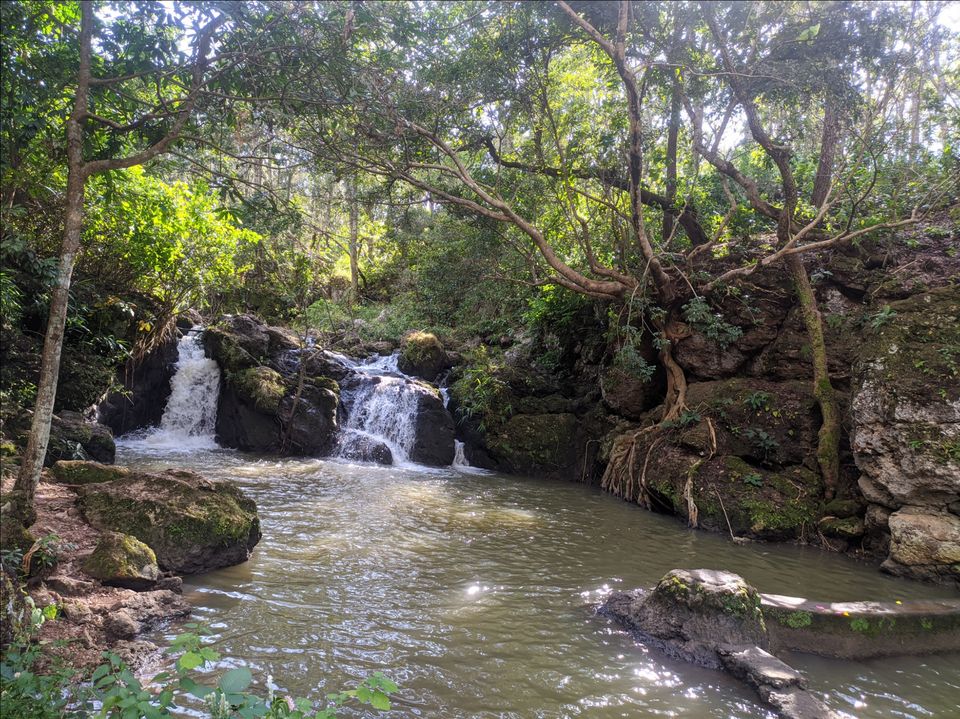 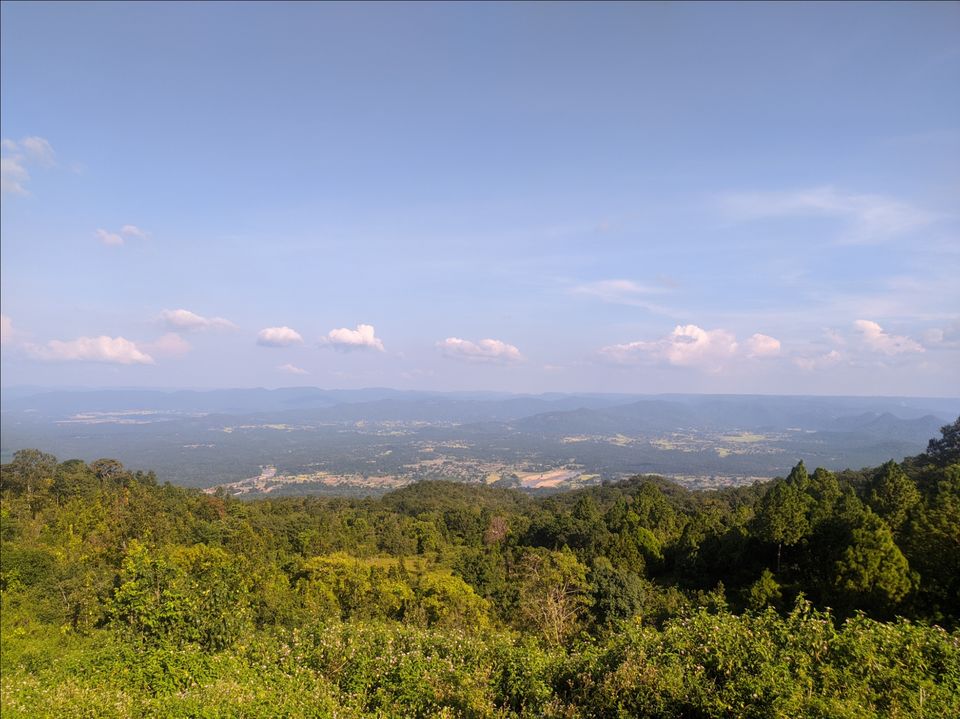 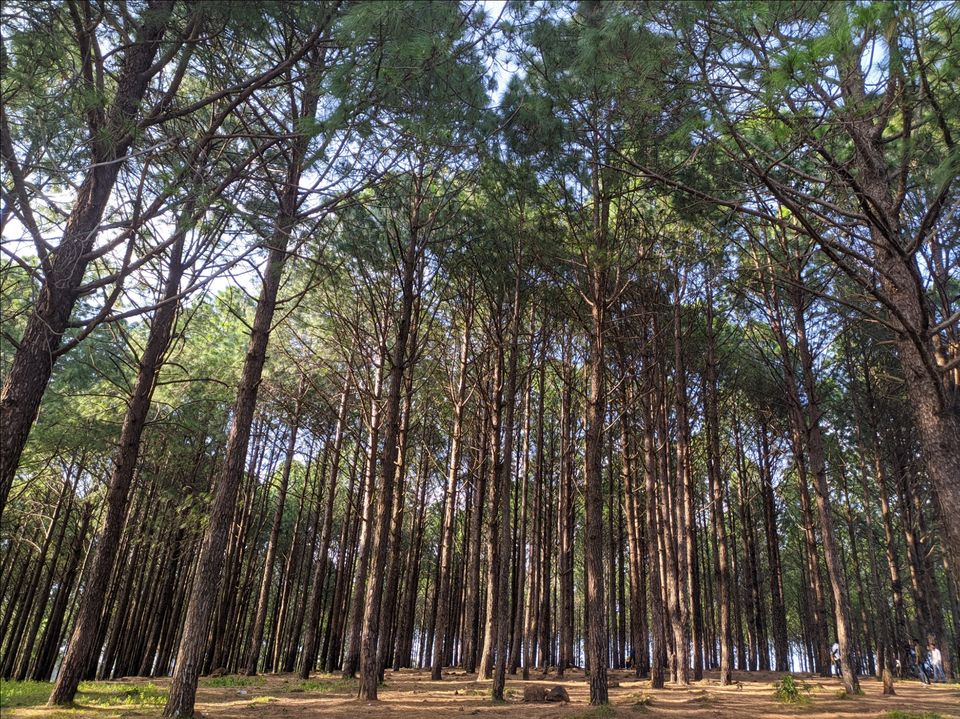 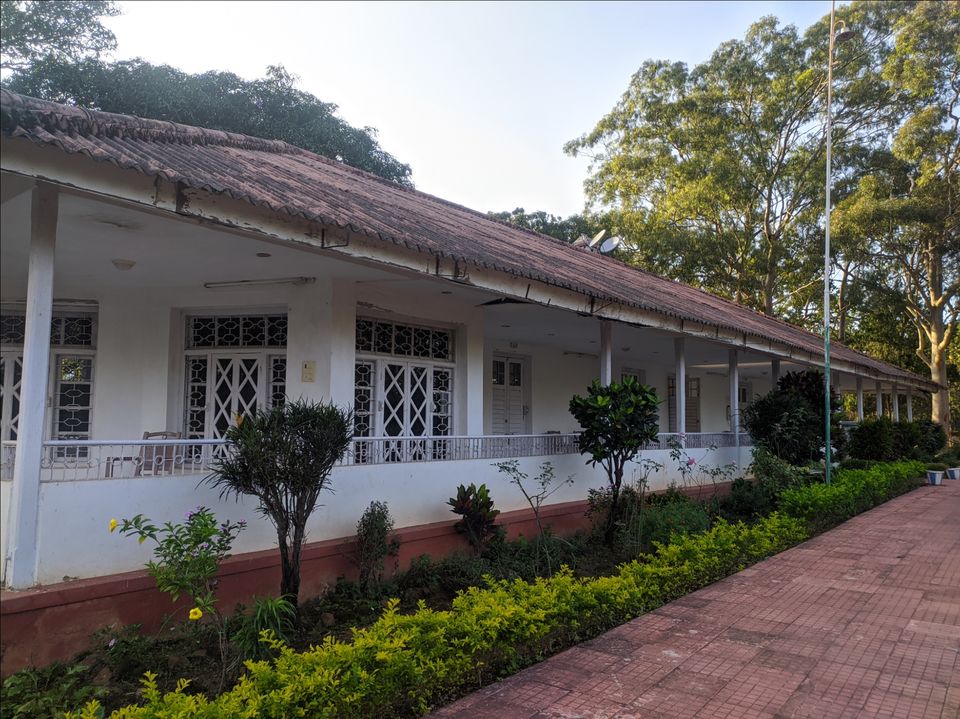 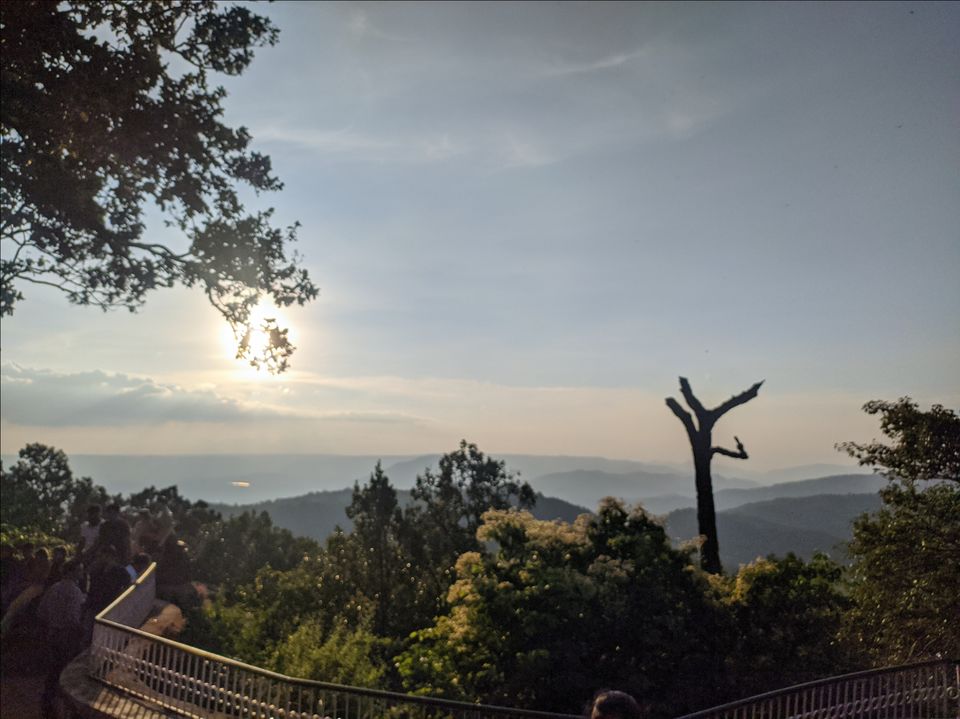 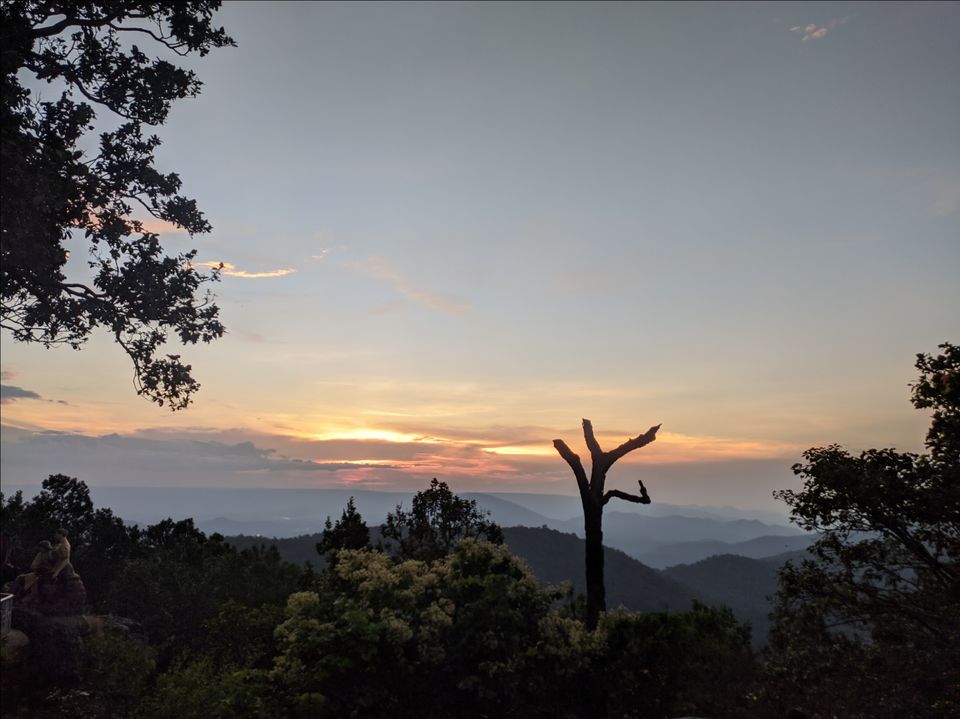 Our day 2 started around 4 am in the morning as we had to rush to the sunrise point which was 1km away from our stay. The sunrise point at Netarhat situated at the Pravat Vihar premise. Pravat Vihar is one of the best stay option at Netarhat. It is a project by Jharkhand Govt Tourism department. One can easily enjoy the sunrise from one's hotel balcony also. Around 5 am a lots of people gathered there to enjoy the sunrise. We enjoyed a lot there with cold morning breeze and had hot tea also.
Around 7.30 in the morning we left our hotel and set in for Lodh falls, the highest waterfall of Jharkhand. It was around 60km from Netarhat and took almost 1.5 hr. On the way first we enjoyed the narrow road surrounded by big trees and after reaching a certain height we felt we were at the top of the plateau. Then we saw the horizon along with the massive grass field. The first town came after Netarhat was Mahuadanr. After reaching at the Lodh falls we had to pay 130 rupees as entry fee of us and our vehicle. Then we ordered a breakfast at a food stall near the gate and then we set in for our expedition to Lodh falls. There are a lots of stairs to reach the falls. Some of the stairs made of concrete but most of stairs were either broken or made of stone. But when we saw the falls , all our strenuous efforts were soothed by audio visual of the falls. Lodh falls is really a amazing falls. One of the must visit place of Jharkhand. After visiting the falls we had breakfast there in a green 'Shaal' leaf made plate. It was another beautiful experience in Jharkhand as it takes a step ahead to reduce plastic pollution.

Now it was the time to go back to Kolkata from the nature's lap. After a 5 hr drive we reached Ranchi. On the way to station we had another sunset view at Dhurwa Dam and Jagannath temple. 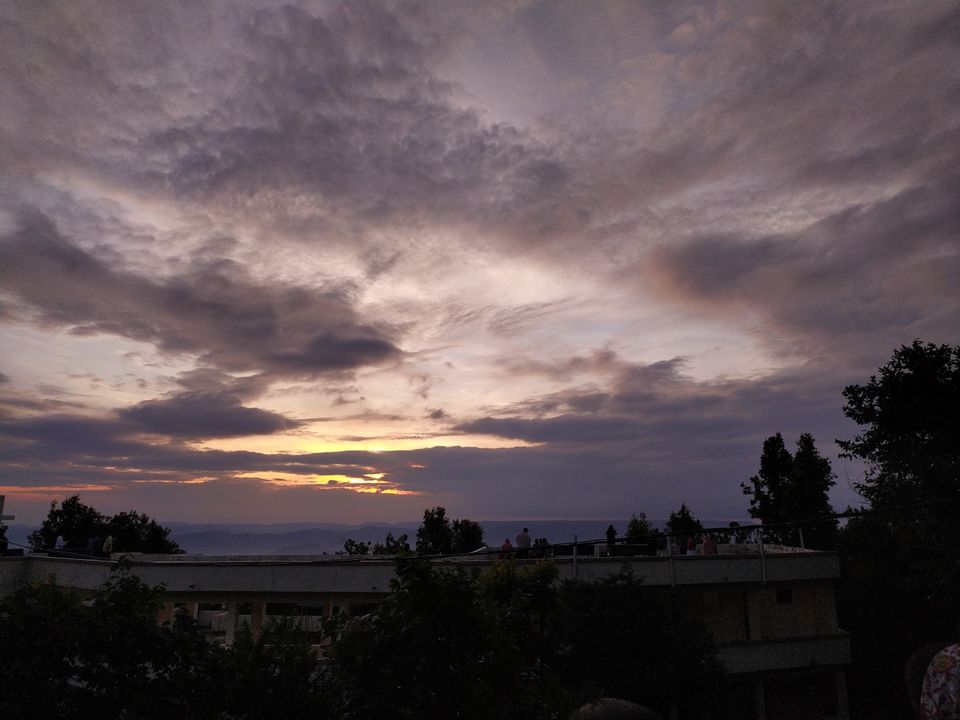 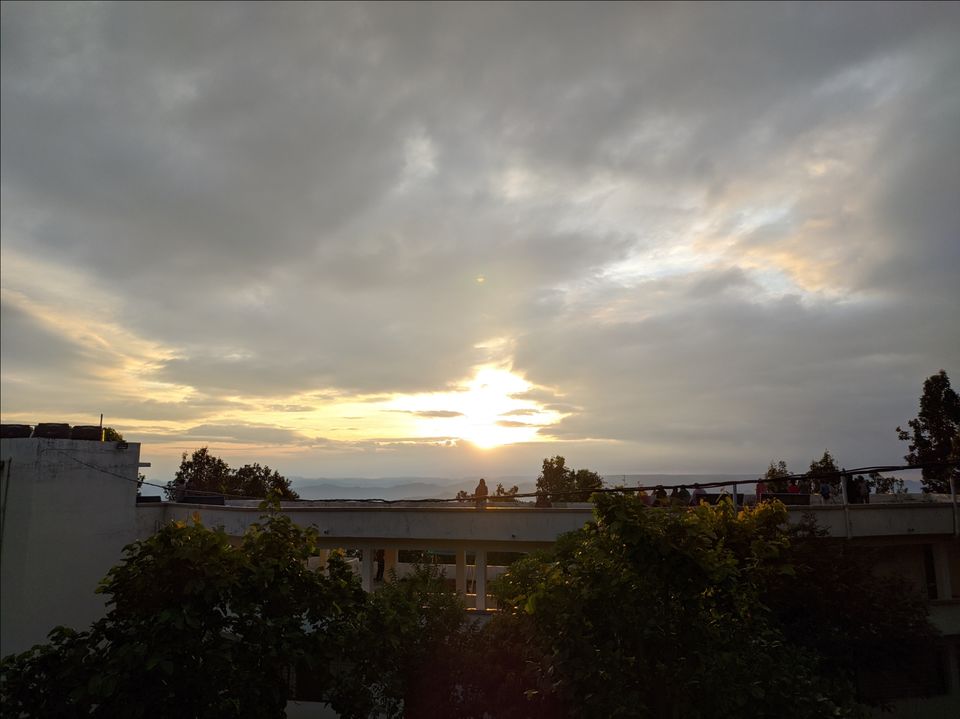 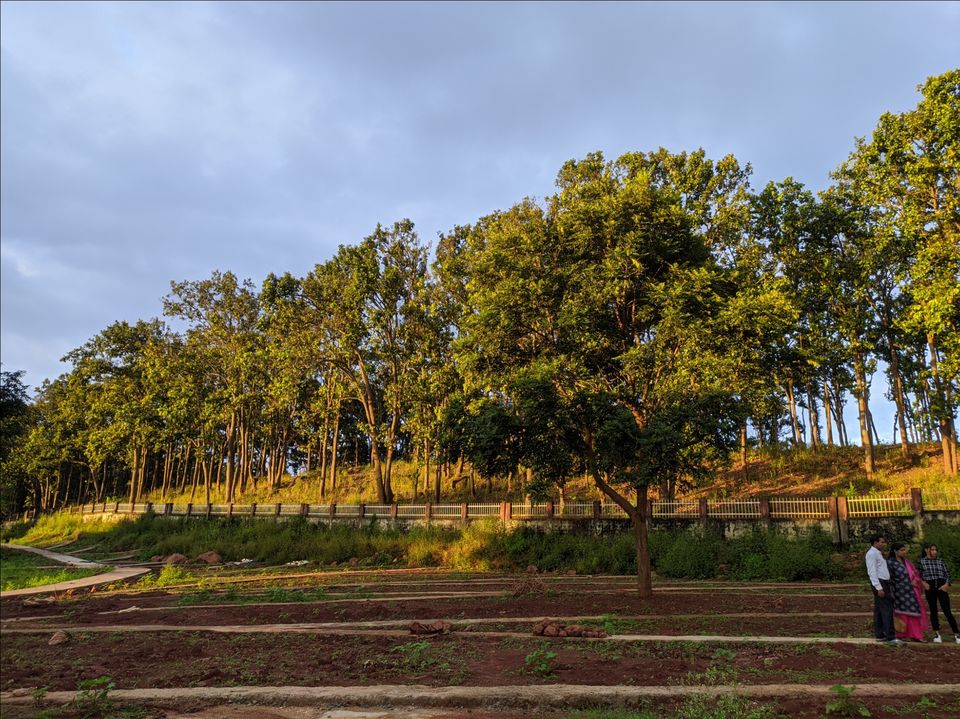 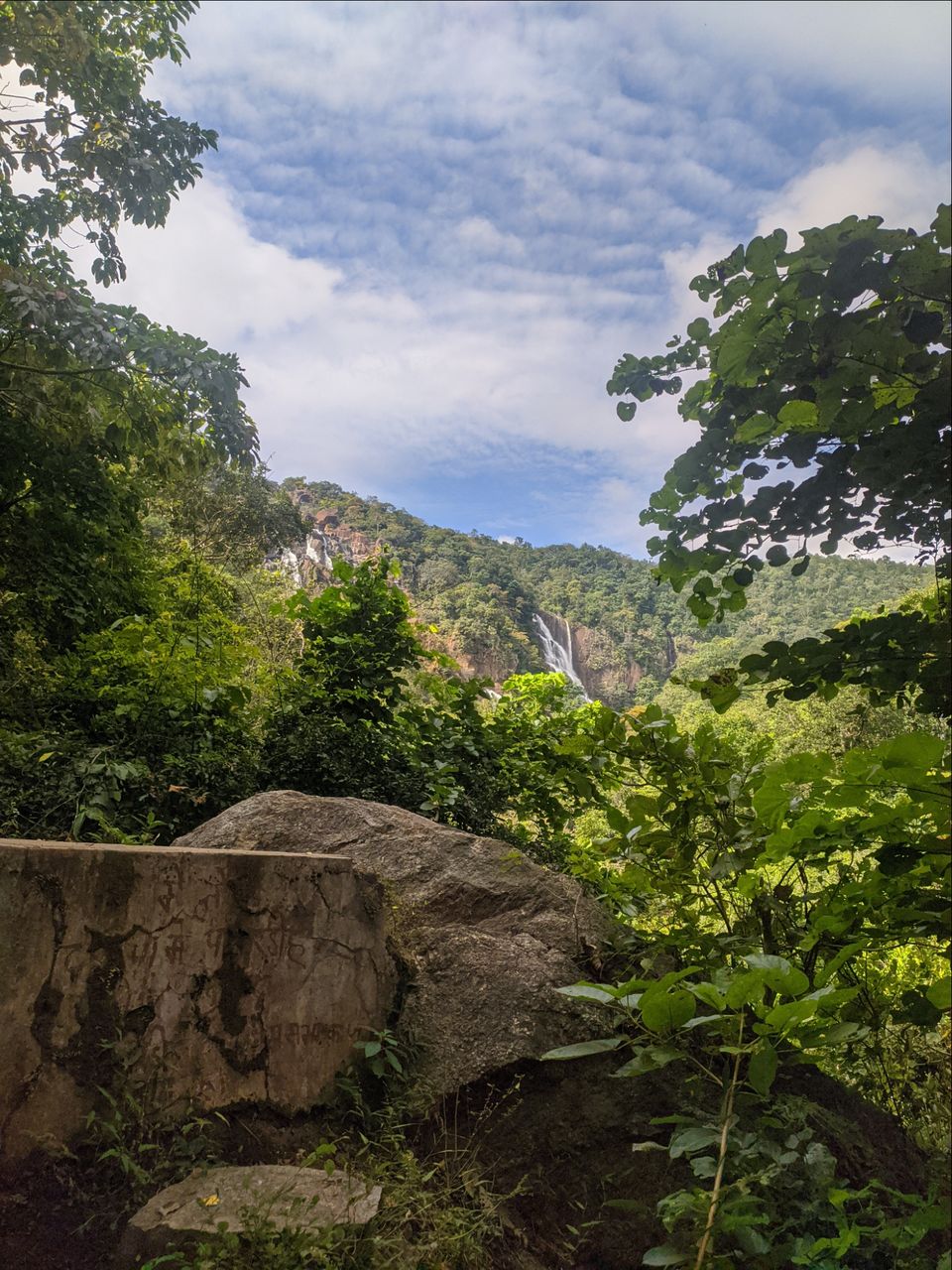 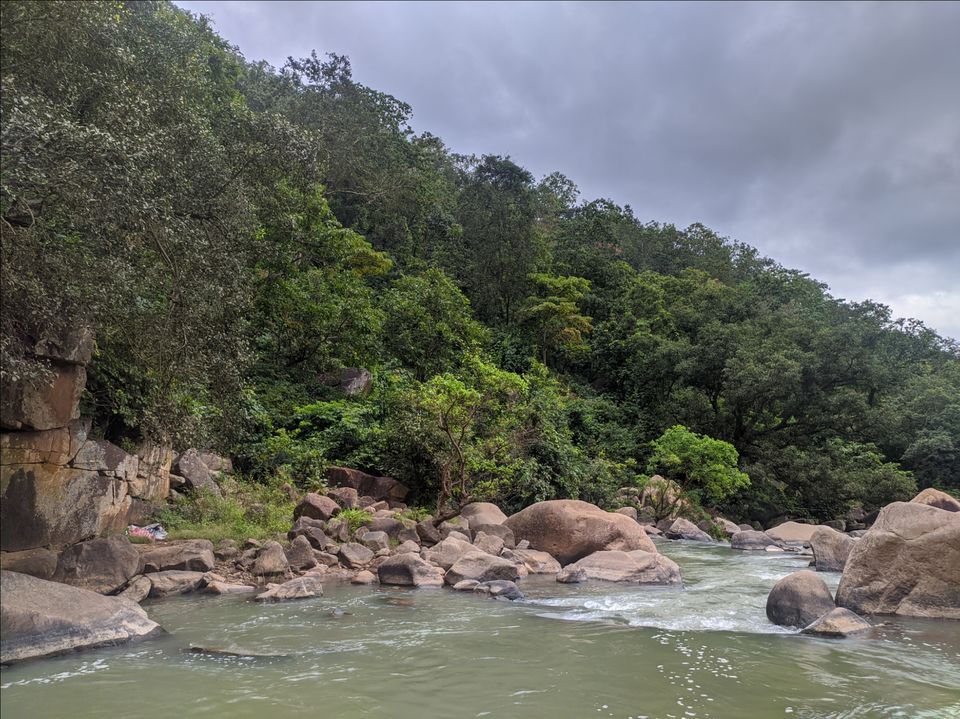 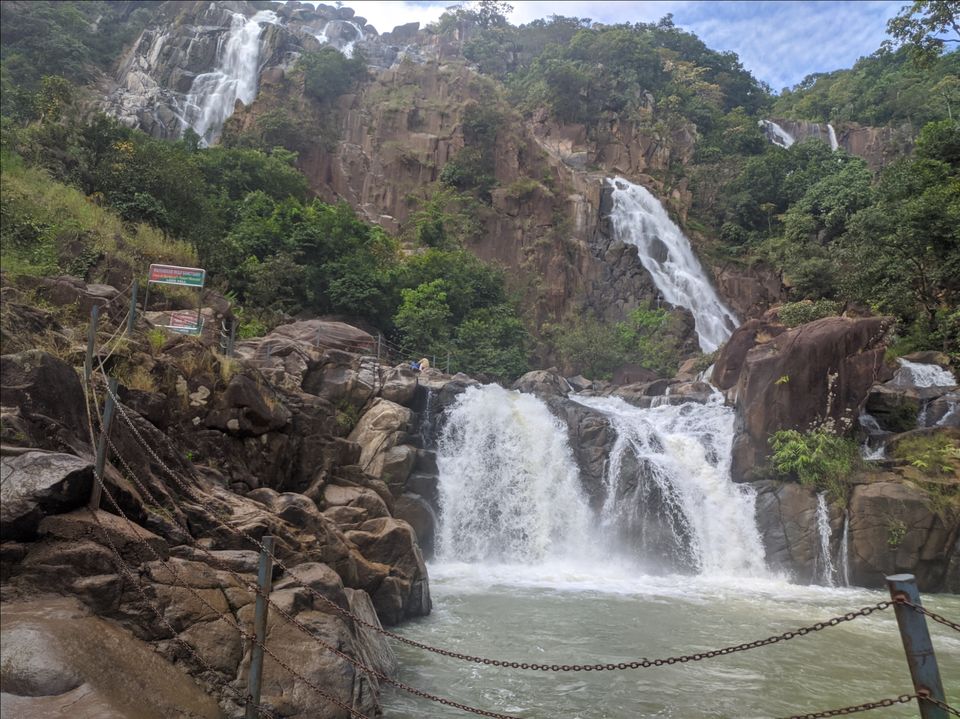 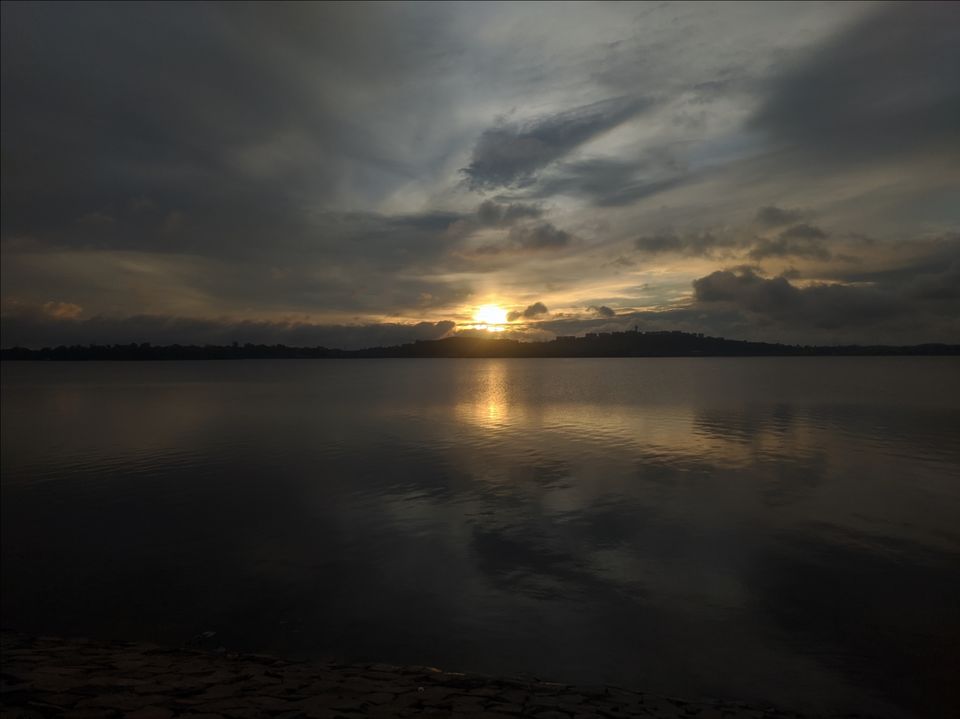