Mongolia is the land of the unexpected. Not much is known about this country to a traveler, so a journey here pretty much turns into a process of unraveling its beauty. But, amidst the somber landscapes and the cliche'd grasslands of the countryside, this country is absolutely wild and crazy! Anything is possible here! Squeezed between the two giants of Russia and China, this country might seem a bit intimidated at first. But, if you open up to Mongolia it will return the favor by providing you with some unexpected gifts and adventures. All you need to do is be ready for a surprise.

Traveling from point A to point B in Mongolia is thrilling and much different from traveling in other countries. I’d scored a spot in a Russian military van. Although the name sounds daunting, these aren’t used for military purposes anymore. These relics of the Soviet Union now ferry tourists from one attraction to the next. The benefit of this cold war technology: it was built to endure. Our invincible vehicle smashed through open countryside and mud at terrifying speeds. Leaping across the landscape like an overweight ballerina. There wasn't a wilderness driver in Mongolia who couldn’t crush any western rally driver. Ours was no exception.

Welcome to the frontier. The least densely populated, independent country in the world. In this wilderness, it’s just us and the bumps. Always the relentless bumps, rattling my blood. Tire tracks lead endlessly into the distance, the only scar on this unworldly, epic landscape. Follow and hope. As we cross each ridge I look for signs of civilization. They never come. Just one or two “Gers” (Mongolian tents) and someone herding sheep on a motorbike.

It’s wild, untamable, insane yet reassuringly robust. It has survived, never-changing, part of a natural unity. When the Russians left, the vans stayed, like adopted children who have found their true family. I’d never thought getting from A to B could be so exhilarating. Cocooned inside our dark green washing machine, the view through the tiny windows an ever-changing landscape. The journey more inspiring than the destinations. I had discovered the essence of adventure travel.

It no longer mattered where we were going, just that we were going. Living in a landscape like this, it’s amazing that Mongolian poetry is so banal.

Our journey in Mongolia started from here. After having spent two nights in Orog Nuur, a remote lake in the Gobi, a combination of heat, mosquitoes and, unlike the previous afternoon, very few birds to see, we decided that we would travel on north towards the Hangai Mountains. The mountains are a great place to trek in Mongolia. 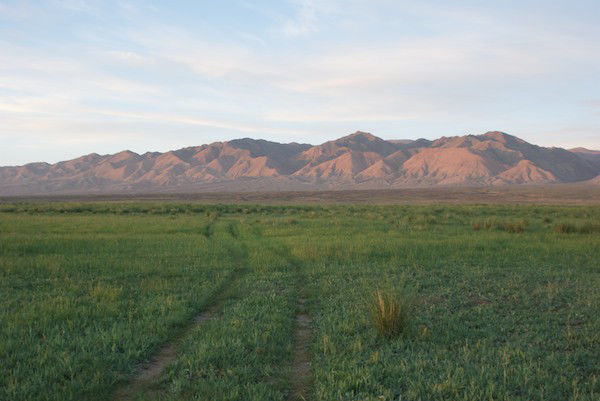 On our way, we stopped at this lovely monastery. The main temple is one of the most exquisitely beautiful buildings I have ever seen. It has a typical Asian roof line and was probably designed by artisans from Tibet or Nepal. The enchanting, open fretwork on the second level gives the building a light, airy feeling. Every vertical surface is a riot of multi-colored carvings of animals, gods, guardians and plants. There are peacocks, elephants, lotus flowers and auspicious symbols in faded blues, greens, pinks, whites and golds. And what makes it almost unbearably poignant is that it is the sole surviving structure, other than the entry gate, that is left on the site from the destruction of the monasteries which took place all over Mongolia in the late 1930s, when the communist government took a Stalinist turn for a few sad, violent years. There were originally ten temples. 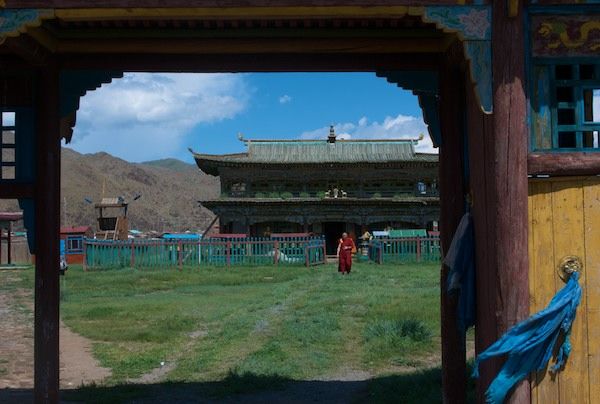 Located adjacent to Khuisiin Naiman Nuur National Park in the Hangai Mountains. I like to call this place "The Valley Of Yaks." As we drove into the valley along the base of a steep slope, a large herd of yaks appeared above us, came galloping down a narrow path and ran across the road all around us. Two chilly-looking, but lovely streams flowed down either side of the wide shallow valley, running over reddish-grey rocks through lush grass dotted with wildflowers and surrounded by the green mountains of a Mongolian summer. Mongol herder’s white gers with their traditional orange doors sat scattered picturesquely about in their summer pasturing land. Large furry yaks in a variety of colors, along with horses, sheep and cashmere goats, freely wandered about, grazing under the blue, blue sky. Black-eared kites cruised overhead, looking for inattentive steppe squirrels. And, best of all, there was no visitor infrastructure of any kind, no other campers and other than the occasional animal sound, blessedly quiet. 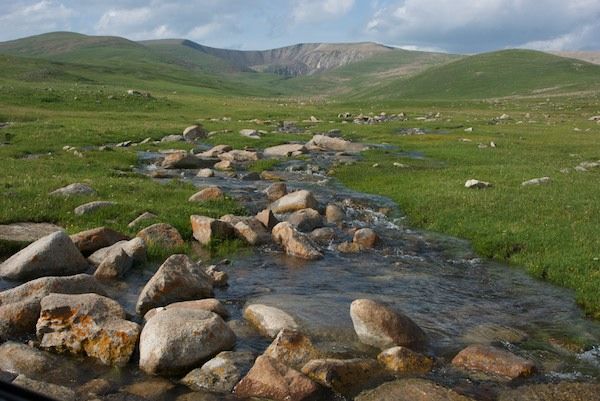 Another fantastic place to hike, our route took us to the Khangai Mountains. On our way to the mountains, we witnessed a horse-racing event. I looked forward to an interesting encounter with the local culture and here was my chance. Naadam, a festival that always has a variety of traditional competitions and activities, including the Three Manly Sports of horse racing, wrestling and archery. It seemed like over half the men and boys were on horseback, warming up the racehorses, chatting and just riding around the area the same way the rest of us would walk. The trainers stood out with their fancy del, sashes, hats and boots, along with their sweat scrapers tucked into the back of their sash. Older men sat on the ground exchanging snuff bottles in the traditional greeting. The kids were happily running and riding all over the place. Everyone was clearly having a great time, as was I watching it all. 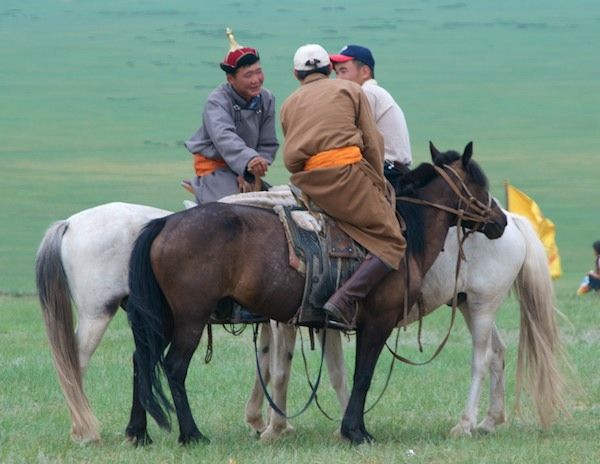 This was an exciting day when we crossed the Tsaatsyn River (that often floods the area.) This was kind of risky and a lot of events unfolded. Things we didn't expect, but that's Mongolia for you! We got across one stream, but were stopped by a broad ribbon of streams and mud. The main channel was moving fast and pulsing with even more water. Went back up to the bluff overlooking the river and had lunch, watching the three van loads of Mongols look for a way across and mess around in the water. Suddenly, there was action with one of the vans. A bunch of guys had formed a line across one point of the main channel and the van charged into the water, started to stall, but the guys all got behind it and pushed it on through! Well, if a van could make it, our big Land Cruiser certainly could and did, without even needing a push. We did end up with an extra passenger, a little eej (mother) who wasn’t about to miss her chance to ride in our big car. The entire “adventure” of the river crossing was a perfect example of Mongol practicality, improvisational skills and good humor. 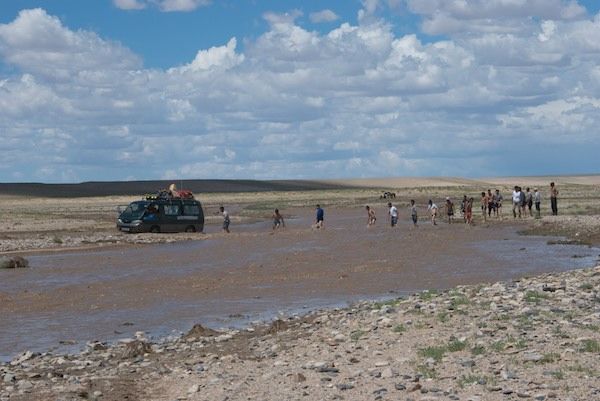 The first 24 hours east of Ulaanbaatar is a movie location scout’s daydream. As I stared through the window, every mile brought a new stimulus. From the dusty, rundown city out to the grasslands roamed by camels. High, rocky outcrops appear from nowhere and disappear as quickly. Then we arrived in the sand dunes that would be more befitting a scene from Lawrence of Arabia. We visited a group of Buddhist Stupas on a hill. Six white, bell-shaped pillars tapering to a sharp point skywards. The only permanent man-made structures we’ve seen in seven hours of off-road driving. As a giant red moon rose out of distant mountains, we camped down for the night. 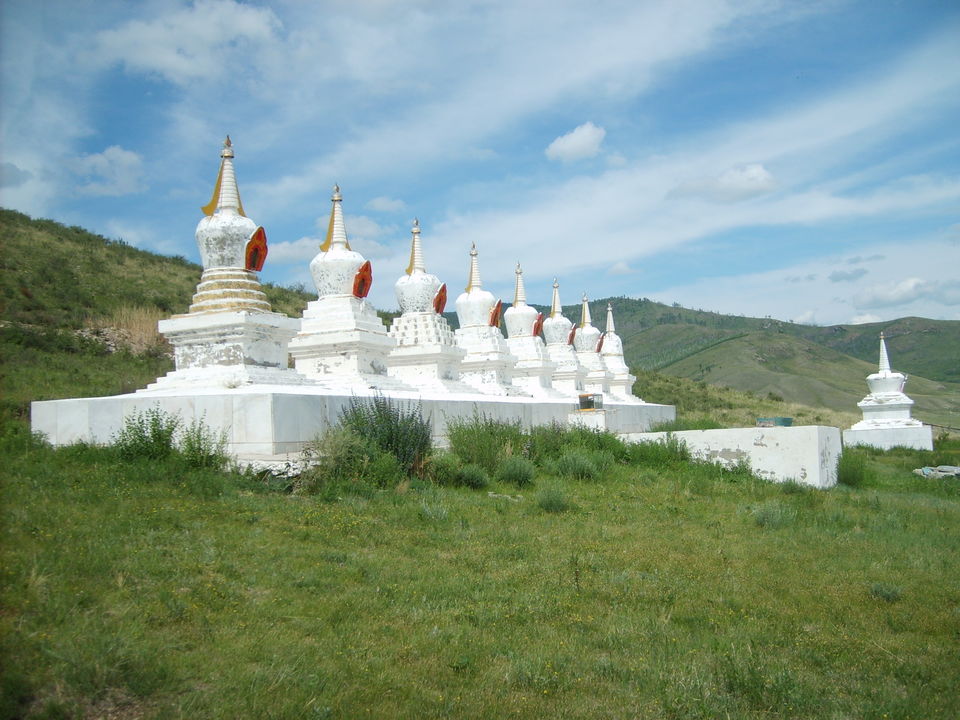