Chopta - Chandrashila Trek: The Most Scenic Yet Easily Accessible Trek 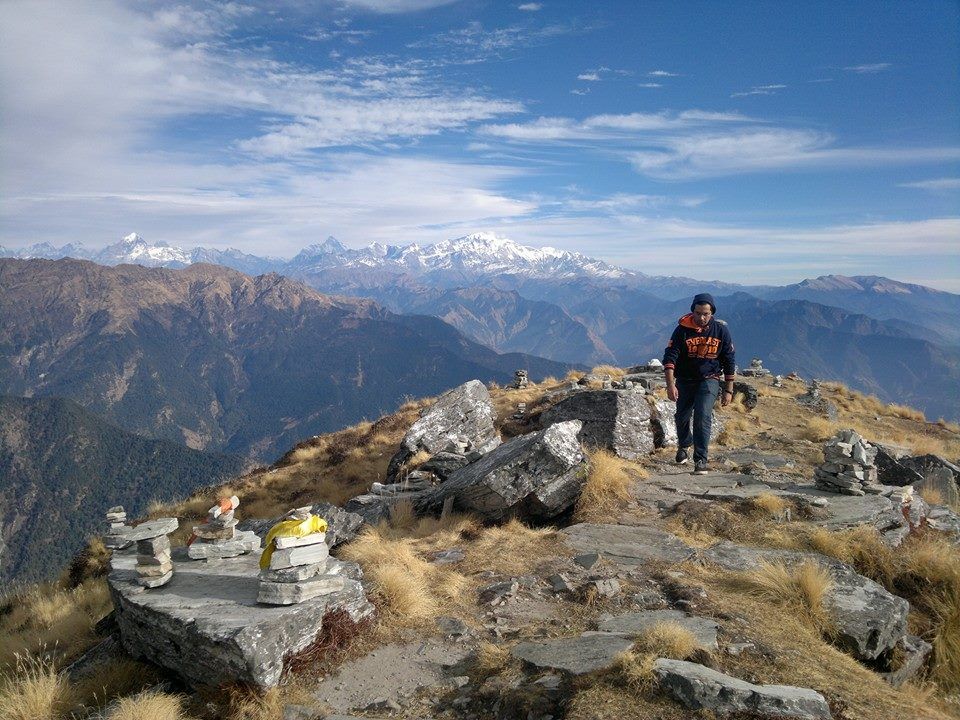 Just as monotony was about to set camp I discovered what I would really like to remember years and years down the lane. The beautiful mountains set on a canvas of the blue sky, the stranger who became a great friend, the history attached to that lady's unique head gear and so on. The real treasure I realised is hidden somewhere I wasn't looking at earlier! That marked the start of my journey to explore and experience some of the finest gifts that nature has to offer.

The very first- Chandrashila. A place that will stay with me forever.

My friend and I headed out with a small rucksack, very little cash and no plan whatsoever. We went to the bus station, only to realize that all three of the possible buses were completely full. Instead of going back and taking one the next day, we decided to take our chances and go to a place six hours from there banking on the possibility that we might find a connecting bus, which fortunately we did. After 20 hours, 5 buses and a generous lift from a driver, we reached Duggalbitta which is 14 km short of the base camp, Chopta.

Through the lush green forests, pin drop silence and our hearts beating out of our chests we sometimes even wandered into the wrong trails only to realize much later. Everything around us was either green or brown, and so real, that it made everything back in the city seem like rubble.

Before we could realize, it had already started to get dark and we were nowhere near our destination. However, we were lucky enough to find a campsite and decided to spend the night. It felt like a three dog night with our tent setup right in front of a stream that goes on to join the Mandakini river. The thunderous roar from the stream gushing down the hill made us realize her overpowering presence and the fact that it is us, who are the guests in her home.

It was only the next morning when we got to see what we were hearing last night, and my God, was it majestic! A scene out of a children's book, with water finding its way around the plush green patches of the mountain, so pure, so serene.

Soaking it all in, we trekked our way upwards and reached a deserted village.

We had thought that no place would be able to surpass the beauty of the place we had left in the morning. Well, we were wrong!

It was like entering an all new world inside of a snow globe, full of small bridges with water flowing under them, small cottages and the view of the snow clad mountains. It seemed like the humble abode of the Gods themselves.

Having had quite an eventful day, we finally reached Chopta and found a small lodge to spend the night where we got the room at the remarkable price of Rs. 300.

What followed was the D day, the final ascent to Chandrashila.

We packed our bags with necessities like water, protein bars, cameras and headed out to start the trek. The first 3.5 km was a very steep ascent and quite draining too. It was a well marked trail with a breathtaking view of the Garhwal Himalayas.

We climbed through the cool breeze and deserted homes to reach Tungnath, which is the highest temple of Lord Shiva perched at an astounding elevation of 12,073 feet above sea level. There was undoubtedly a spiritual air around the place engulfing the beautiful architecture.

We went further, only to see that the well-marked trail has now reduced to a very broken, narrow, steep and dangerous trail heading upwards.

We started climbing and all we could hear was the air and all we could see was the edge of the cliff, just 2 steps to our right. We climbed right through the fear and finally reached the top.

There was a pattern that I noticed - From Duggalbitta, through the campsite, the deserted village and then Chopta. There was a similar progression in all these places. All of them were completely untouched with each being more beautiful than the previous one. How did I deduce that, you ask?

Well, it was because I was staring at the answer! Chandrashila!

Oh My! That place. It just shut me up!

I finally understood what 'not having words to describe something' meant. We were feeling like literally on top of the world with endless mountains till as far as one could see, with clouds below us and the rays of the sun piercing through them.

Towards one side were the snow covered Garhwal Himalayas with Kedarnath and peaks like Bandarpunch in our sight. Whereas, on all the other sides were endless mountains and dense clouds. Even pictures were not able to do justice to the astounding beauty that was in front of us. We just sat there on the top, not saying a word to each other, listening to Pink Floyd and trying to take it all in. We took out a vest and wrote our names, date and a small quote- ' Trek your way through life ' with a piece of charcoal we picked up on the way and left it there for anyone else to see.

We were trying to come to terms with the view when it had started to become a little dark and it was time for us to leave. We headed back down, but the memories of what we had just witnessed had taken over us, and the descent felt like a cakewalk.

We reached back to Chopta but had no conveyance to go further down, which is when we asked for a lift from a cab driver there. He gave us only one exhilarating option- to ride on the roof. We looked at each other and hopped on.

The sun had set and it was quite cold. We were on top of a car with 2 other people (and of course a big tyre), driving 30 km on extremely narrow roads to finally reach Ukimath. We were freezing when we got off but the experience was unparalleled.

Finally, after 3 buses and countless hours we reached home only to create a memory which is forever etched in my mind. Although it has been quite some time since this trip, I remember everything like it was yesterday and can relive the experience by just closing my eyes. With all the evidences to back me up, I can safely say that a part of me will forever be there in Chandrashila.