An Evening in Haridwar

I was unprepared the first time I visited Haridwar. Having put up in Roorkee, the place was a perfect weekend getaway. That was it. I didn't even get my facts right and quarreled with the husband like a child, over the fact that the Hari in Haridwar suggested that the place is significant because of Lord Vishnu. But I remember that I was mesmerized by the chaos and the sheer aura of the place. Little did I know that I would come back over and over again for some soul searching and for just being with myself. 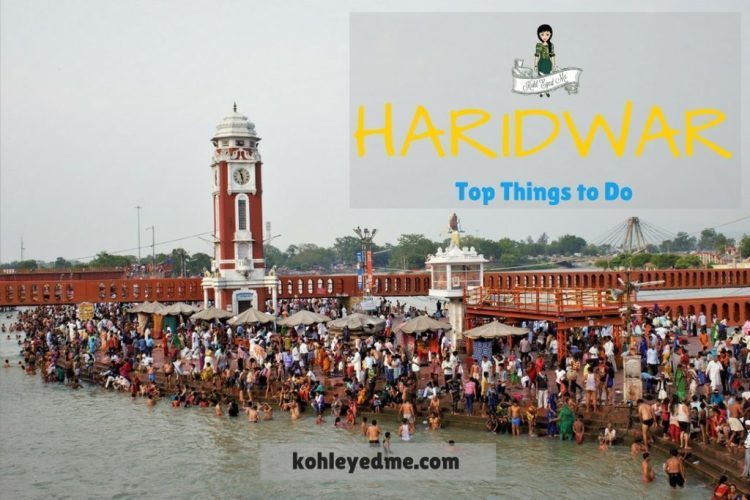 Considered as one of the most sacred cities in India, Haridwar is situated at the base of the Shivalik ranges of Himalayas. Haridwar or the Dwar of Hari, meaning Gateway to Lord Vishnu is one of the seven holy cities of India - the Sapta Puri. Additionally, devotees of Lord Shiva and devotees of Lord Vishnu, call this place Hardwar and Haridwar respectively, relating to Har being Shiv and Hari being Vishnu.

Haridwar was known as Gangadwara as here's where the holy river Ganga enters the plains for the first time after having flowed for over 250km from its origin, the Gangotri Glacier. Every year trillions of people flock here to pay their respect, take a dip in the Ganges, do pooja and to perform the last rites of their loved ones.

Come June and July (the month of Shravan), Haridwar bustles with millions of Lord Shiva devotees, known as Kanwarias who come from far and wide to attend Kumbh Mela, the largest religious gathering in the world. The pilgrims take the Kaavand or Kanwar Yatra to fetch the holy water of the Ganges and carry it across miles to offer to Lord Shiva. The Kavad or Kanwar is a pole of bamboo with two water pots tied on either side. The pilgrims clad in saffron, carry the Kavad and chant Har Har Mahadev or Bam Bam Bhole as they walk towards their destination. It's a photographers' delight as you can spot some uncommon sights then.

Immerse yourself in the mystic aura. Listen to the Vedic hymns and mantras. Gain an insight into your inner self. 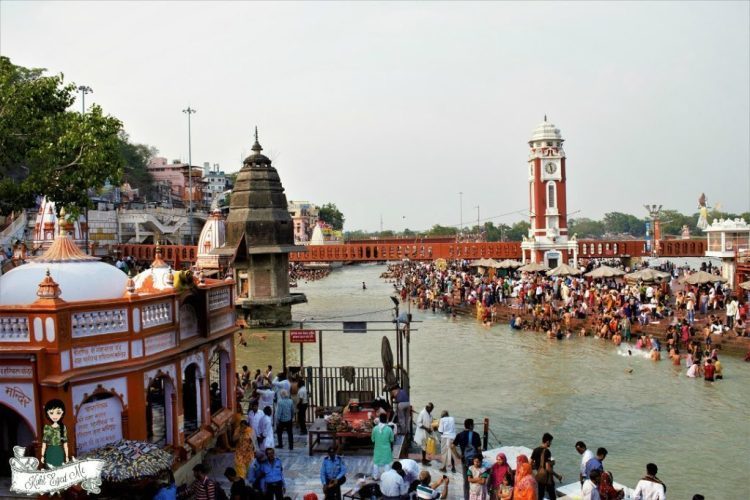 Things to do in Haridwar

1. Take a holy dip in the Ganges at Har ki Pauri

Har ki Pauri meaning the Footstep of God is one of the most sacred Ghats in Haridwar, at the bank of river Ganga. It is said that Lord Vishnu had dropped Amrit, the elixir and left a footprint here. Another version is that, along with Amrit, came halahal, a poison which was so deadly that the world started burning up. Lord Shiva had consumed the poison, giving him the name Neelkanth(blue throat). He was offered the holy water of Ganges in a Kanwar to heal. 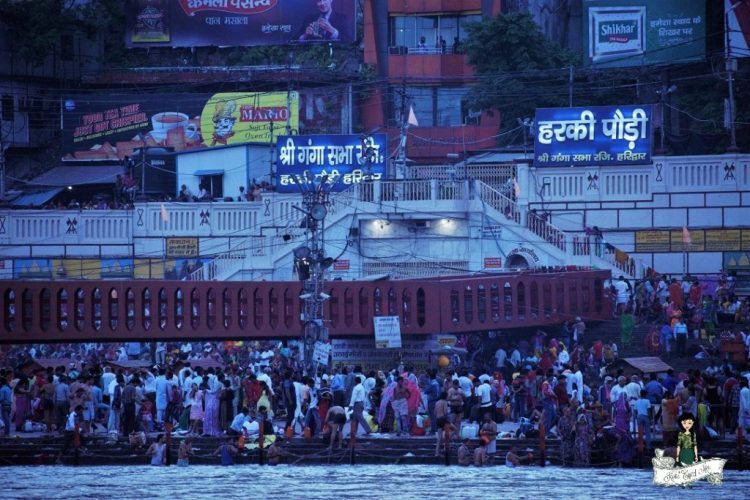 When I visited Har ki Pauri, I was overwhelmed with a sense of serenity and peace. It is believed that if you bath in the river, you will be cleansed of the sins in the present and previous lives and achieve Nirvana.

The Ganges in Haridwar is clear when compared to Varanasi and I feel, it is best to take a holy dip here if you are concerned about pollution. 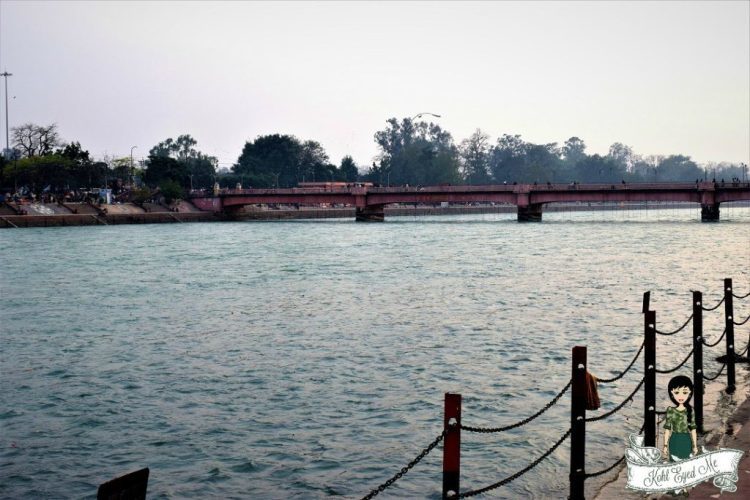 The holy dip in the Ganges was so refreshing. Even in the hot summers, the water is icy cold. It is not so deep as well. There are iron chains and grills for safety. The changing rooms for women are, however, few.

The mystic aura is enhanced as thousands of diyas and marigold flowers illuminate the river during the Ganga Aarti.

Even if you are only a traveler or a photographer, you do not want to miss this religious prayer that happens in the bank of river Ganga.

Ganga Aarti in Har ki Pauri, Haridwar is a sight to behold. The priests perform prayers for river Ganga in synchronization, with fire and ringing temple bells. Thousands of tourists and devotees come here every day to attend the ritual. 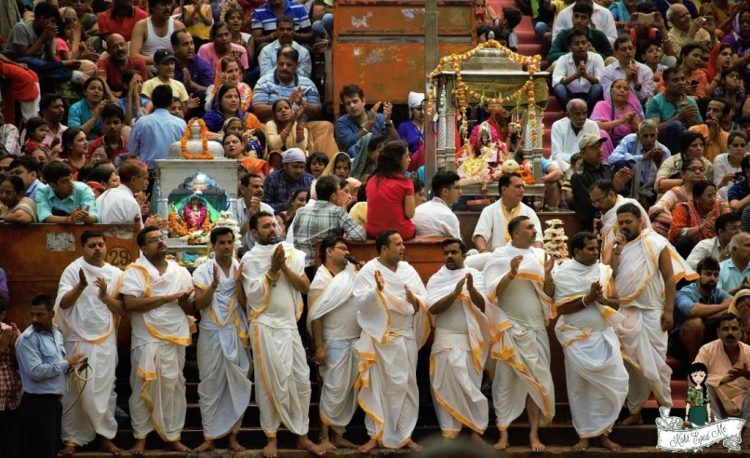 As fate would have it, we had the lucky chance of making it on the day of Buddha Purnima. The Aarti was to start at 7 pm and we found ourselves seated on the opposite bank at 5.30 pm itself. Oh, the crowds were already filling in along both the banks at this sacred Ghat. 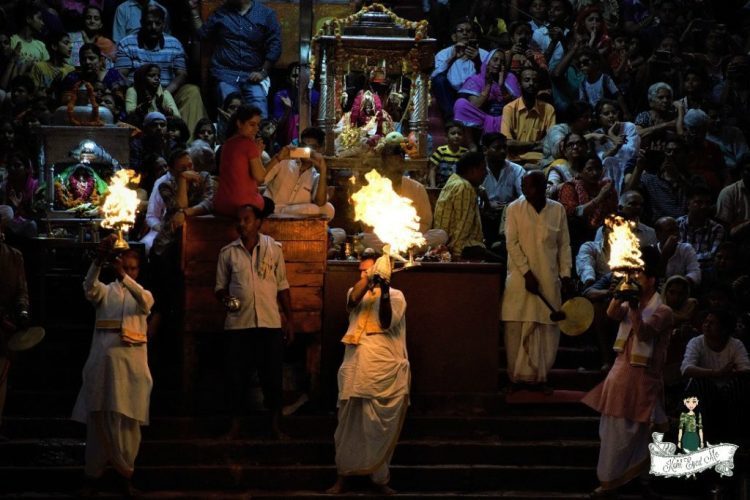 By 6.30pm, Har Har Gange, Jai Ma Gange started to fill the air. The priests chant live and you can hear them through loudspeakers. 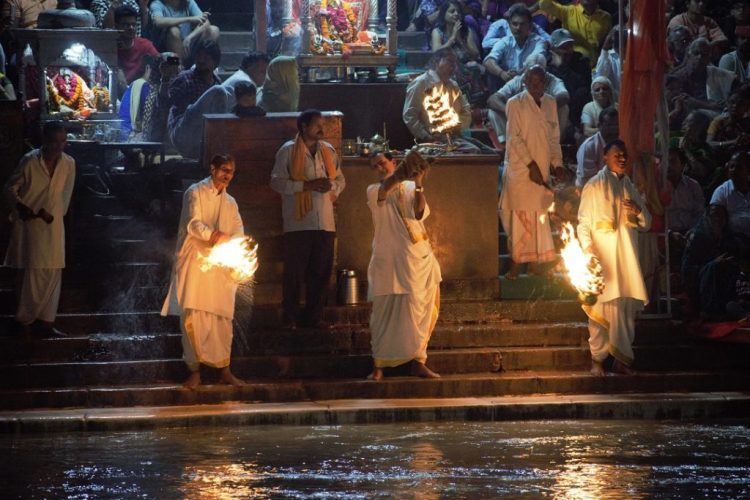 I was touched when I heard them ask everyone to promise and take a pledge - to not pollute the Ganges. 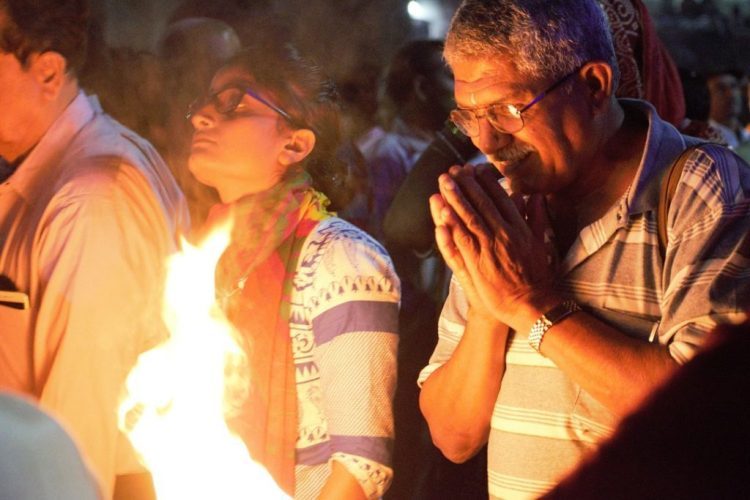 You can find uniformed men managing the crowds and asking for donations and a few, selling diyas (lamps) to be floated on the Ganges after aarti. 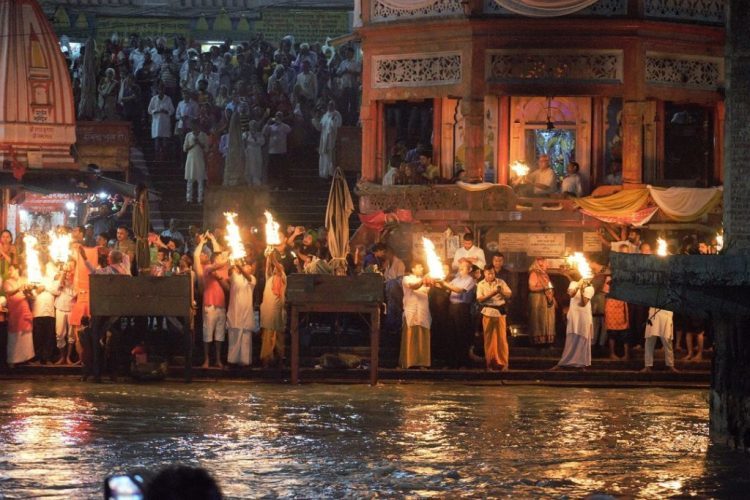 3. Get on a Cable Car to Chandi Mata and Mansa Devi Temples

The first thing we did upon reaching Haridwar was to get a combination ticket for the cable car to visit the Chandi Mata and Mansa Devi Temples. These temples are situated on opposite hills and can be also reached by foot. However, the cable car experience was great as we could see the beautiful city of Haridwar and river Ganga flowing amidst it all. 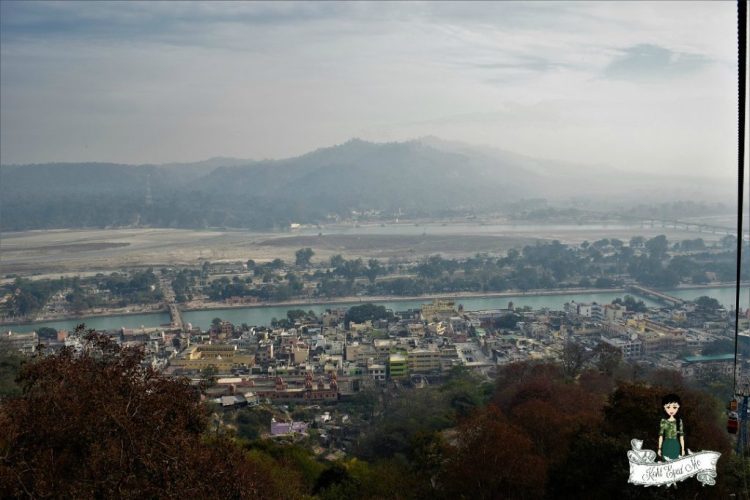 On the entrance to the temple, I found some beautifully arranged plates of flowers which can be bought to be offered to the Goddesses. Navratri festival is celebrated in grandeur here. 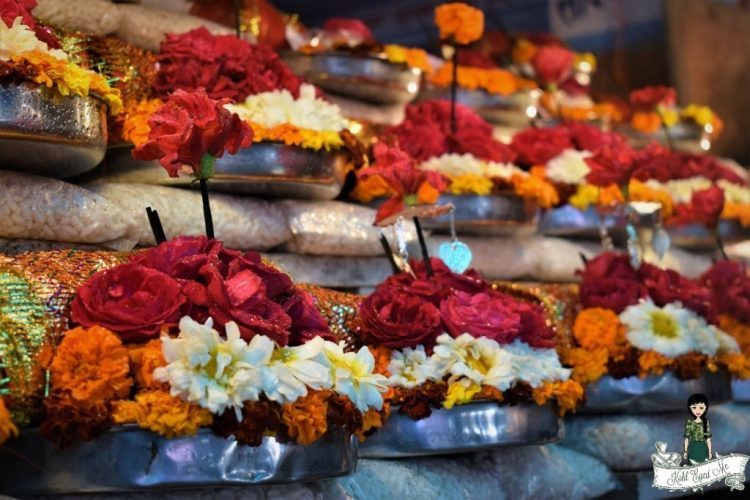 Head over to Mohan Ji Puri wale, the first restaurant at Har ki Pauri, after taking a dip in the Ganges. You ought to try the lip-smacking Puri, Kachori, Halwa, and Lassi. 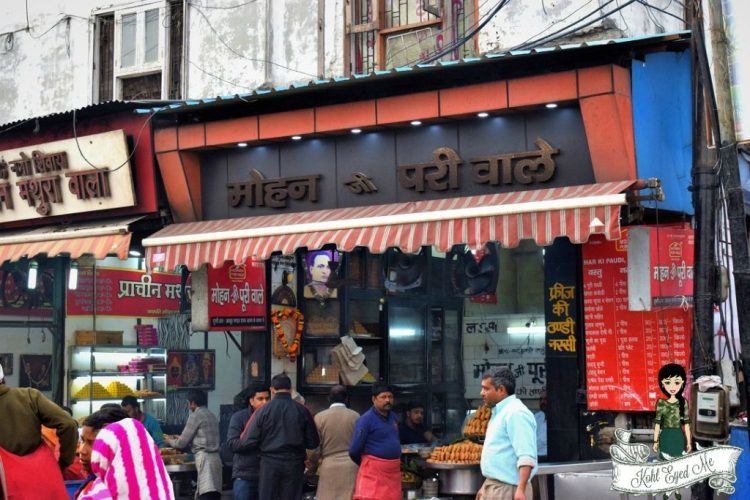 The place is tiny with not many options for sitting though. That doesn't stop the place from being crowded almost all the time. You can spot diners standing outside the joint, having their Puri-Sabzi served on a leaf. They serve excellent coffee during winters. 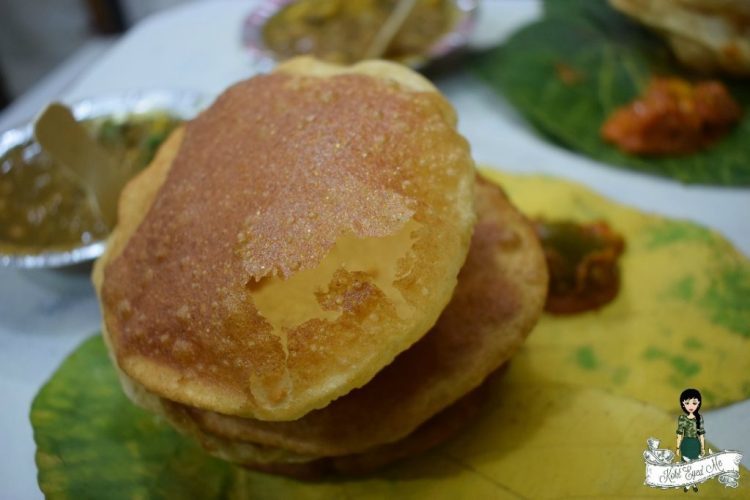 The first thing you notice upon reaching the Har ki Pauri Ghat are the colored water bottles hung on the outside of all the shops, in different shapes and sizes, from about a cup to a gallon. You can buy these to carry the holy water of Ganga, to keep at home. It is sacred and is believed to ward off all evils. 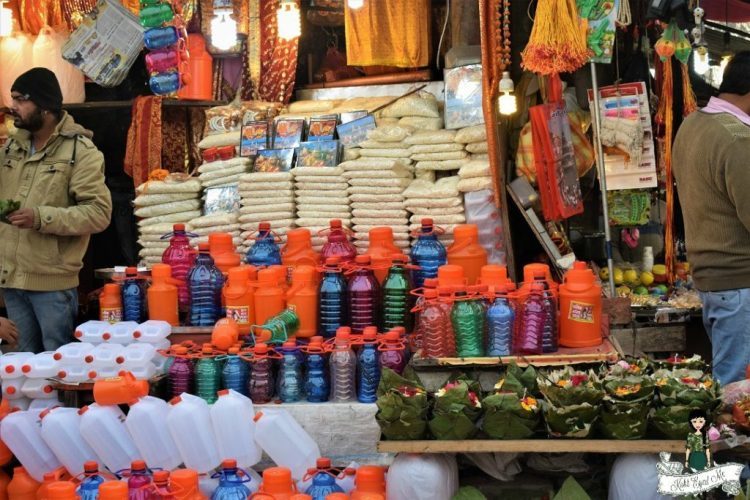 Haridwar is the best place to buy stuff related to spirituality especially Hinduism. There are several shops where they sell rudraksha, idols, saffron clothes and many other things. You can also find things made of wood, like ladles and items for home decor. 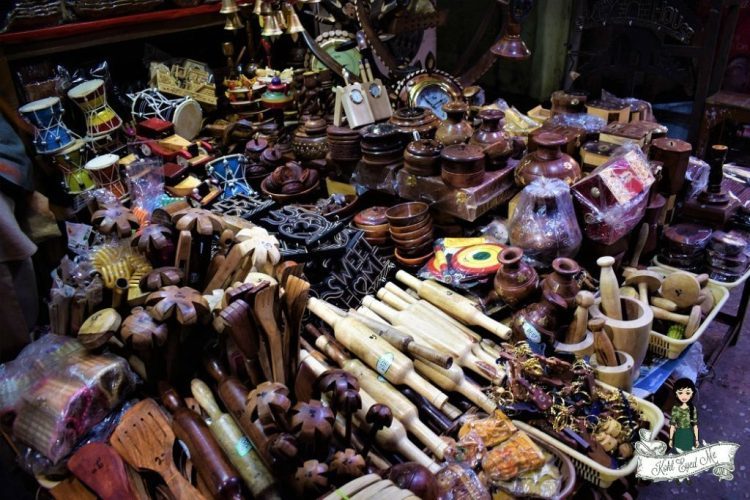 What else can you do in Haridwar

Haridwar is one of the popular pilgrimage centers of India. There are professional Yoga training centers as well. You can also visit the ashrams to know the lifestyle and work culture here.

You can also visit this 100-foot Lord Shiva statue situated on the banks of the Ganges.

Being a place of religious significance, non-vegetarian food and alcohol are prohibited in Haridwar.

Photography is prohibited inside the temples.

Sadhus and saints are the earmarks of the city. However, not all are genuine. Avoid being over generous when it comes to money.

Haridwar can be visited in a day. I would suggest you head out to Rishikesh by late evening for stay. However, you can find a variety of accommodations here including budget guest houses, luxury resorts, and hotels.

The best seasons to visit Haridwar are between September and June. July and August are rainy months and the place can get extremely dirty. Winters are the best time as the water in the river is clear and not many tourists are found due to the cold. Oh! Do not forget to carry your woolens if you plan to visit in November through February.

Do not carry eatables in your bag as there are monkeys who can be a menace. 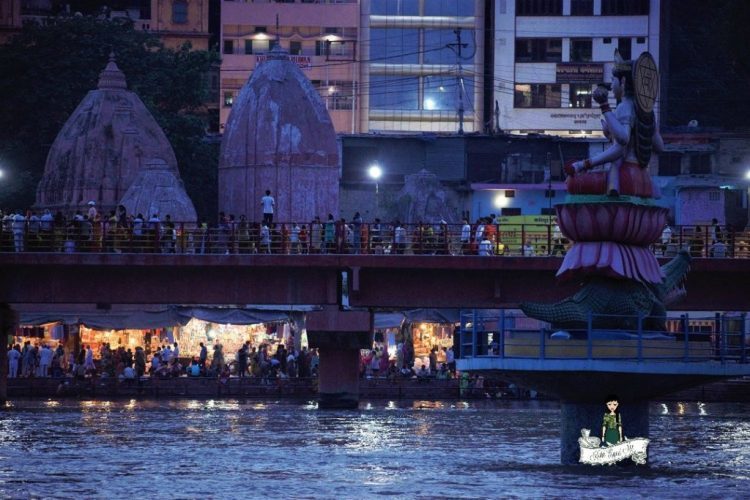 How to reach Haridwar

Haridwar is easily accessible by road from all the major cities in North India. It is about 200 km from Delhi. Hop on an air-conditioned bus from ISBT and you reach Haridwar in about 7 hours. You can also avail private tourist cars and taxis. Another great way to travel from Delhi to Haridwar is by train. The Shatabdi is a fully air-conditioned train and leaves for Haridwar twice daily, morning and evening from Delhi.

Have you been to Haridwar? Share your travel experience with me. Feel free to pin this. 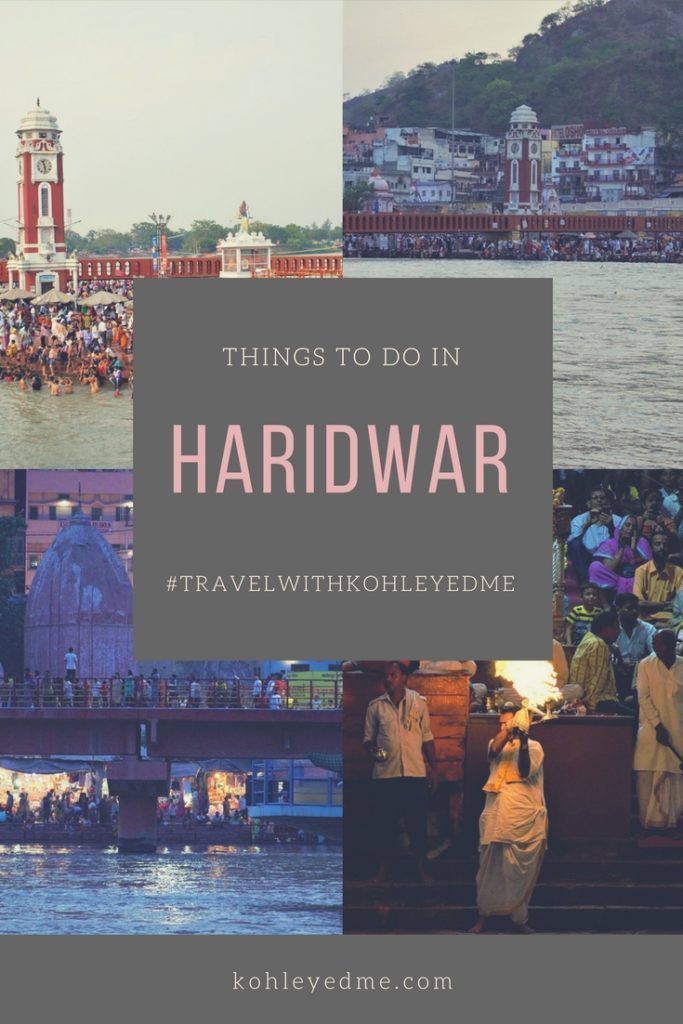 I am so happy that I could visit this holy city many times, in different seasons and occasions. As I type this post, our house is filled with black boxes of various sizes and our home is slowly being packed in these. It may be time to move to another station soon, as part of the Army Wife Life. And I am surely going to miss here.

This blog was originally published on Kohl Eyed Capers.