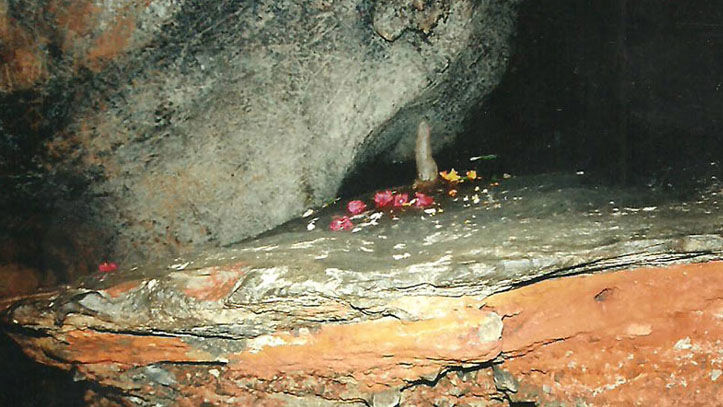 All search of this place will result in the amalgamation of myth and mystery of Dan Brown novel. It is almost an hour drive from Chaukori and closes after 6 so plan accordingly. The name says it all that it is a located deep inside earth level. There is a basic ticket price of Rs 50 that includes mandatory charges for Guide as the place is treacherous and a bit risky. As soon as you enter on your right you can see the entrance which is nothing but an opening of around 1 feet naturally made tunnel going down. The first look and I blabbered I can not go inside with my kid as not only it was very narrow but it was vertical with an iron chain in middle for support like rappelling. Patal Bhuvaneshwar is not just one cave, rather a cave city. The cave is 160 m long and 90 feet deep from the point of entrance. Limestone rock formations have created various spectacular stalactite and stalagmite figures of various hues and forms.

This cave has a narrow tunnel-like opening which leads to a number of caves. The guide came to my rescue and said don't worry I will carry the baby initially and will pass it on to you once you are down. The initial few meters were really scary with only stones all around and hardly any place to squeeze through, but things got better after that once the path became less vertical and finally opened inside a cave. The first shock you will get is when your Guide will tell you that at the moment you are almost 100 feet underground. But behold this is just the beginning of amazements that is in store for you inside. This is literally like stumbling into a treasure trove of all mythology and mystery that has existed beneath our feet since the time of Vedas as there is a reference to this place in Skanda Puran.

So the cave is full of wonders all nature made like how is having 3 stones representing Brahma Vishnu Mahesh all originating from the same stone base and having again a 3 tipped hanging stone which somehow magically drops water on each one of them. Also, beat this in all black stone cave there is one amalgamation of stone which is aptly called shiv-jata which is white in color and is always dripping water even when there is no river or lake over this entire area. It's just mountain. If you look up you will find a small cave that has a very clear black shadow print as if Some sage actually sitting there, lore says it was Rishi Agstasya.

There are again naturally carved stones that resemble Airavata and his hundred legs. Now suddenly our guide says look at the ground which you have been walking, we look down and find as if it is a skeleton of some snake body, not any snake my dear the guide then shows us the head of Sheshnag clearly staring back from one of the stone corners. The story doesn't end here it is believed there are three tunnels here off course not for normal humans but it is believed one of them connects to Kailash and was used by Pandavas for their formal walk to the afterlife, the proof again a set of five stones.

There is again a folklore here which shows three stones two of which have already touched the cave's roof but one is somewhere in middle and is said that every hundred years or so it grows an inch or two.

Call it an end of the world counter, Our own Nast re Damas. The feel, the stories and the uncanny resemblance to multiple characters really beg question who and how created this. if not god then who else could have stored such amazing things at one single place that could not have been found.

Legend and folklore have it that this underground cave enshrines Lord Shiva and thirty-three crore (330 million) Gods. According to belief King Rituparna of the Sun dynasty (Surya Vansha) discovered the cave in 'Treta Yug'. It is also believed that this cave is internally connected to the four abodes / seats ( Char Dham).

Adi Shankaracharya visited this cave in 1191 AD. That was the beginning of the modern pilgrimage history, at Patal Bhuvaneshwar. The journey inside the cave has to be carried in feeble lights, holding protective iron chains. The Stone formations of Sheshnag can be seen, holding earth, heaven the world beneath. 'Havan' (fire sacrifice) is performed in a dimly lit, solemn atmosphere, under the spell of holy chants. One can also be impressed by the huge stalactites, called "jatas" of Lord Shiva, located at a different location inside the cave. This is where Shiva rested when he chose to visit these parts from the celestial heights of His abode in Kailash.

The cave, it is believed, is connected by an underground route to Mount Kailash. It is believed that Pandavas, the 'Mahabharat' heroes proceeded towards their last journey in the Himalayas after meditating here, in front of Lord Shiva.

The place is very claustrophobic and is dimly lit with no mobile allowed inside so we could not click pictures but we got them outside being sold by someone. I was spellbound but not because of lack of oxygen but because of air of mystery that I was inhaling. The ride to the top was again through the same hell hole and we somehow managed to come out of the place unharmed. I tipped the guide handsomely as it was his enthusiasm that we all went down or else I would have cursed myself my entire life. Jai Patal Bhuvaneshwari!!!