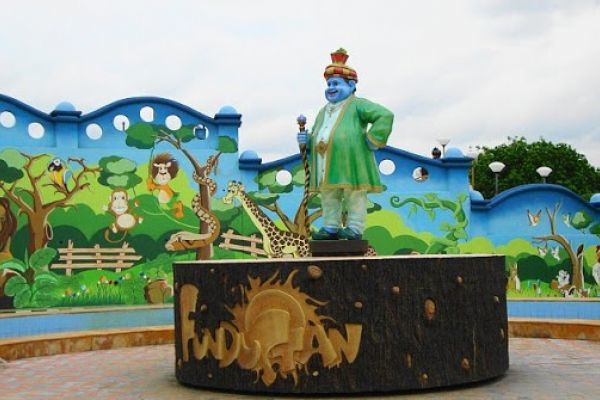 Hyderabad started the series from September 2011. Then there was their own house, then there was a breakfast of sandwich and tea and came out at nine in the morning. Due to not being a car, it could either be rotated by train or by bus. We just took the bus near the people when it seemed more appropriate to walk with the bus. Hyderabad bus service was very good. Here, we had to wait for more than 5 to 10 minutes at some places and which car from all the buses were also telling us well. Altogether, it was very fun to travel by bus. If Ramuji is walking, then it is proper to go there for the whole day. Ramuji Film City is the world's largest film city, and its name is also registered in Guinness Book. Once in my childhood, my father had gone there for official work, he had heard a lot about him, he had many years of desire to see and now he got a chance to watch.

Ramoji Film City Hyderabad - Vijayawada is 25 km away from the city on the National Highway. By changing two to three buses, we reached the gate. The film city, which was spread over nearly two thousand acres of area, was produced by the famous film maker Ramoji Rao from South India for the film shooting of the film on the lines of American Universal Studios. It is believed that the filmmakers come here with the story and after that the pictures are made. Along with being used for film production, it has also been opened for tourists too. There is much to woo the tourists. There will be only at least fifty kinds of gardens. Apart from this, a glimpse of the Mughal Gardens, the Hawa Mahal and other sights of India are also seen in place. In some places it seems like we are not in India, but we are roaming in some foreign land. Apart from this, sets used in many films such as hospitals, temples, villages, schools The temples here are such that in accordance with the climax of the film, God is changed. The truth is there is no such thing that is not here. Here the shooting of those stunts in the picture is also shown which we are afraid of, coming here today, the reality of how the movie makers fool the viewers.

The next route can be decided by the bus provided by Ramuji. In which we were already standing by imposing several tourist lines. Waiting for an hour and 10 minutes to reach the main gate of Ramuji from here. Now take the ticket to take the turn. Ramuji's Guided Tour ticket for the elderly is six hundred rupees and five hundred rupees for children from three to twelve years. These are two year old 2011 rates, so far there has been some increase. By the way, the big ticket for 2015 was nine hundred rupees. The time of ticket booking is from 9 am to 2 pm and the time for the journey to the city is up to four and a half hours. We got two tickets with us. When reaching the gate, fundus was seen from the front which is behind the boarding spot for the guided tour provided by the bus. Well, this place is also enjoyable for the children as well as for the elderly, but if there are children together then the danger is not free from danger, because then they will not take the name of moving from there and keep looking at the rest of the place. By looking at these places, if anybody's heart was forced to become a child, then what was we going to do? That's where we spent half an hour.

Ramuji is a huge complex in itself, which is not possible in any condition to see it in one day. Therefore it is advisable to move here and to know about places to look first in the subtle form. By which you can see things you like first. Information about the places and activities present here -

There is no permission to bring food from outside. If you are hungry, you have to worship stomach only in the restaurant itself and according to your budget, you have to choose a place, otherwise there is a big hole in the pocket.

Now it is the turn of the Fundus, as soon as we get off the bus, we move here, this is the place. The attraction here is as much as the children are in the same age group. There is so much to see and play for the children that they all fall for the whole day. Here's what the children have to ask for what's not to ask It is more reasonable. Somewhere in the video game parlor, there is a big swing on the Toyland somewhere, then beautiful walls filled with colorful artifacts. Let's look here. Stop being there.

A standing train is visible only after a slight increase. Which is not a train but a snack house, then it is seen that the dancing fountain which is the main attraction of children. Then look somewhere, Bal Hanuman, then somewhere with a ten-headed Ravan. After this, see the Tulsi door door which, after coming out, keeps the memory of scary travel in mind. Wherever the ghosts are on the wall, somewhere in the dark, somewhere unknown by the way, when they see that falling is sure.