How we escaped from hustle-bustle to land of happiness, BHUTAN. 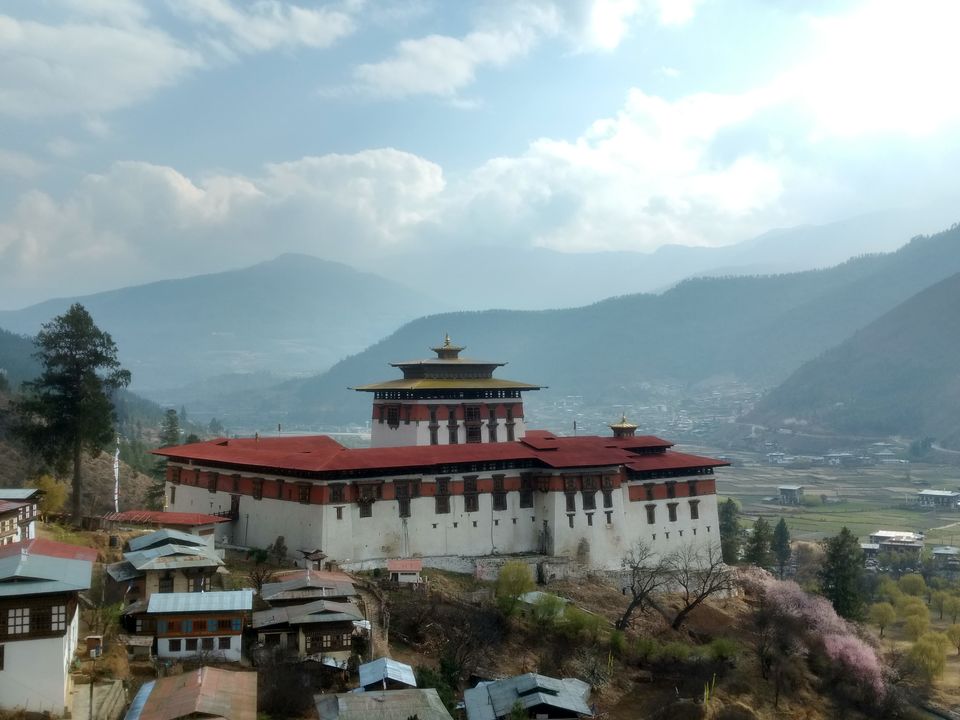 We were a group of 5 people travelling from Dhanbad, Jharkhand. We took train upto Siliguri and took bus from Siliguri to Jaigaon. Jaigaon is the Indian side of the Indo-Bhutan border. We booked our travel package from Jaigaon with All ways tours and travels. They charged us 39,000/- for 5 people. They covered the travelling, petrol and lodging charges. Food in Bhutan is slightly expensive than India, so food was upon us.

Bhutan accepts both passport and voter id card for Indian permit. Monday is usually rush at the permit office. So it's advisable to go to the permit office as early as possible. For bikers, vehicle permit and traveler permit are required.

Some points to remember while entering Bhutan:

1. Water in Bhutan costs more than India. So buy water bottles from Jaigaon.

2. Road from Jaigaon to Thimphu is steep with lot of curves which will cause vomiting and breathing problems. So buy medicines from India.

3. Take proper winter clothes as temperature in Bhutan is between 1-5 degree centigrade.

Waking up to the mountains on the Bhutan side. 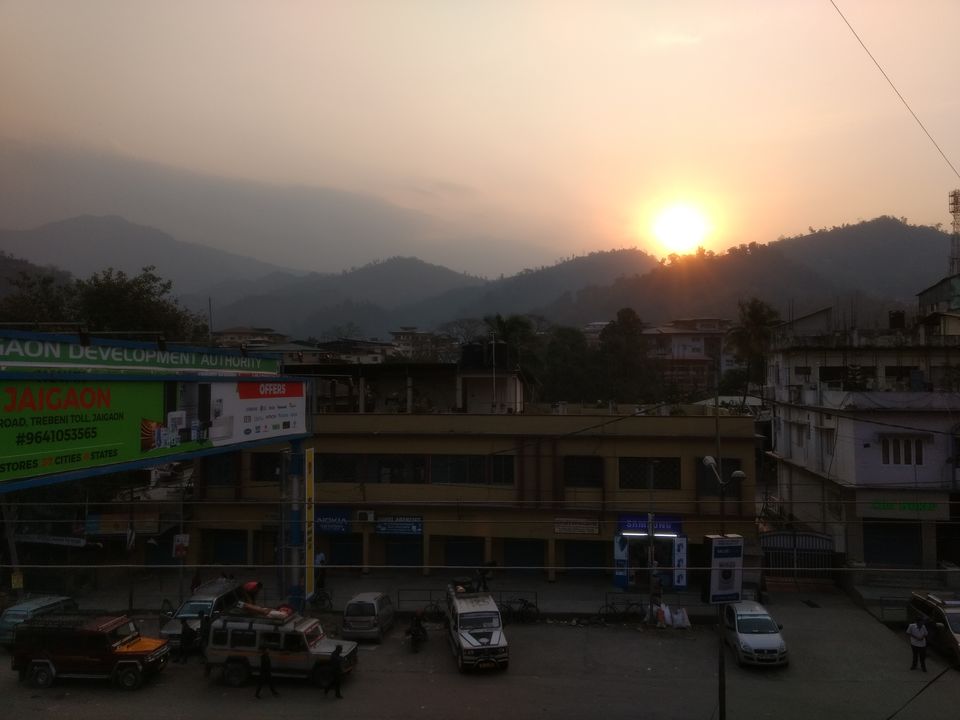 At the Bhutan permit office in Phuentsholing. 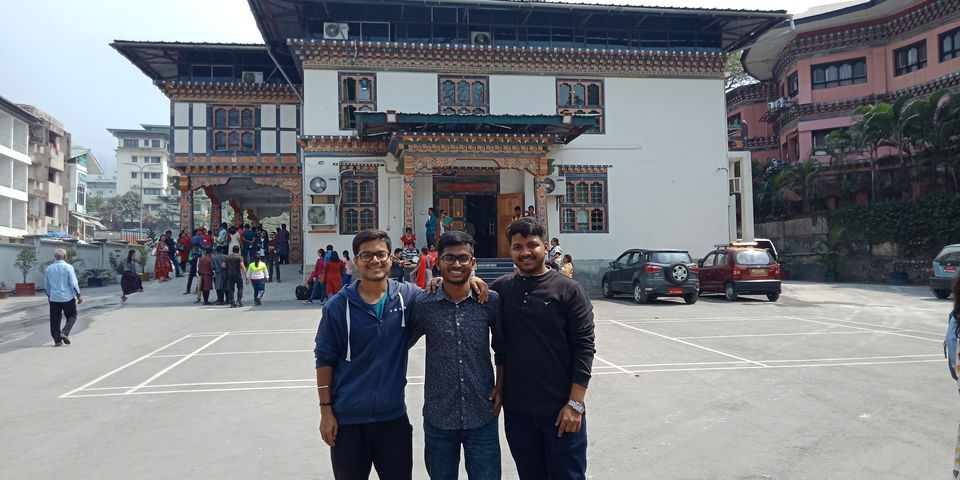 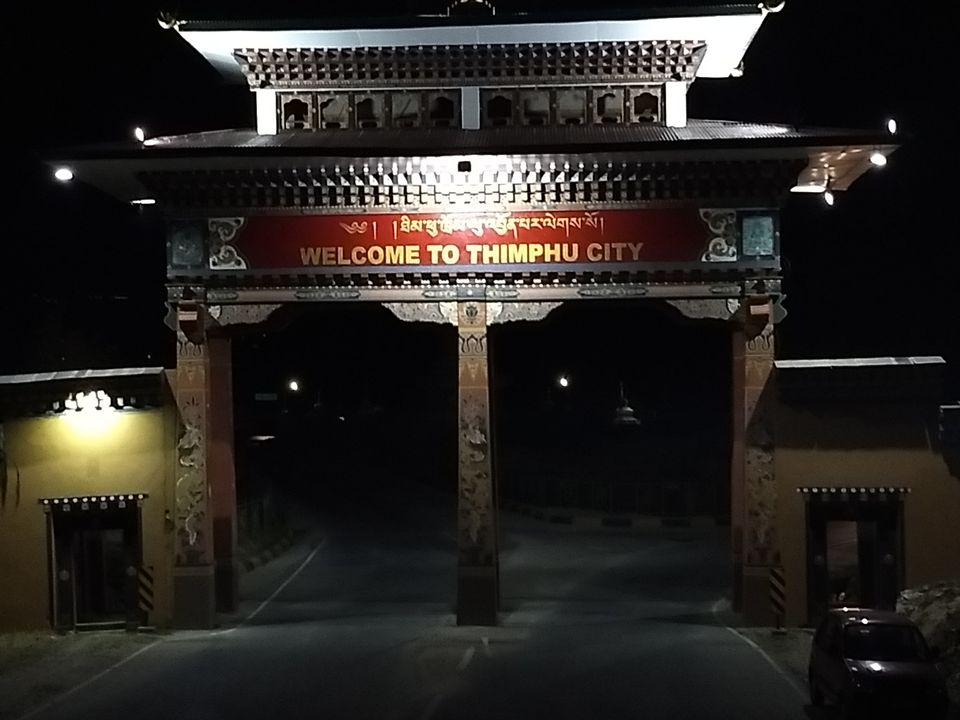 Went for sightseeing near Thimphu.

The main building of the textile museum. 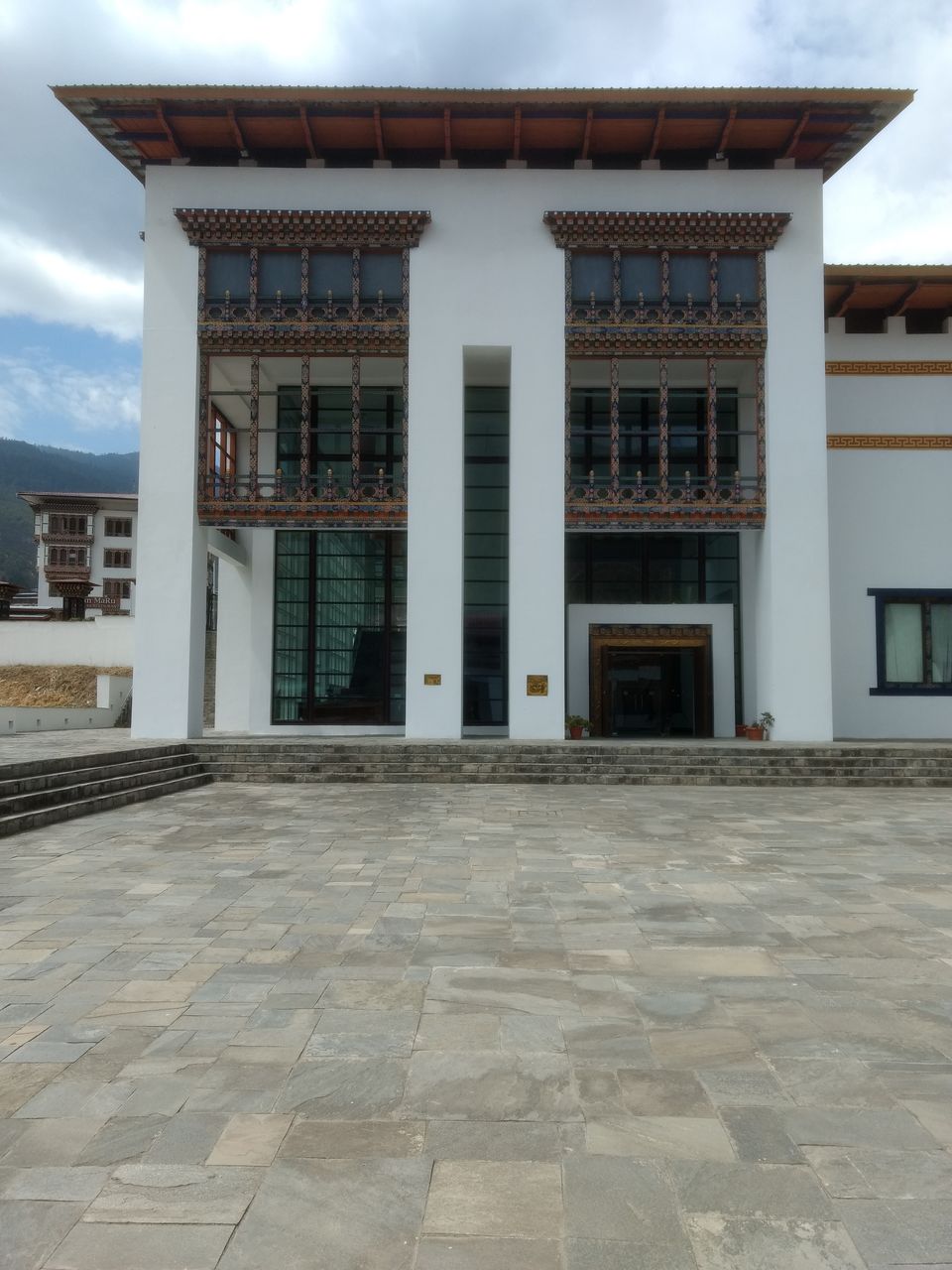 Located atop a hill this Buddha statue looks magnificent when viewed just in front of it. The surrounding hills and the picturesque background make it a perfect location for Instagram clicks. 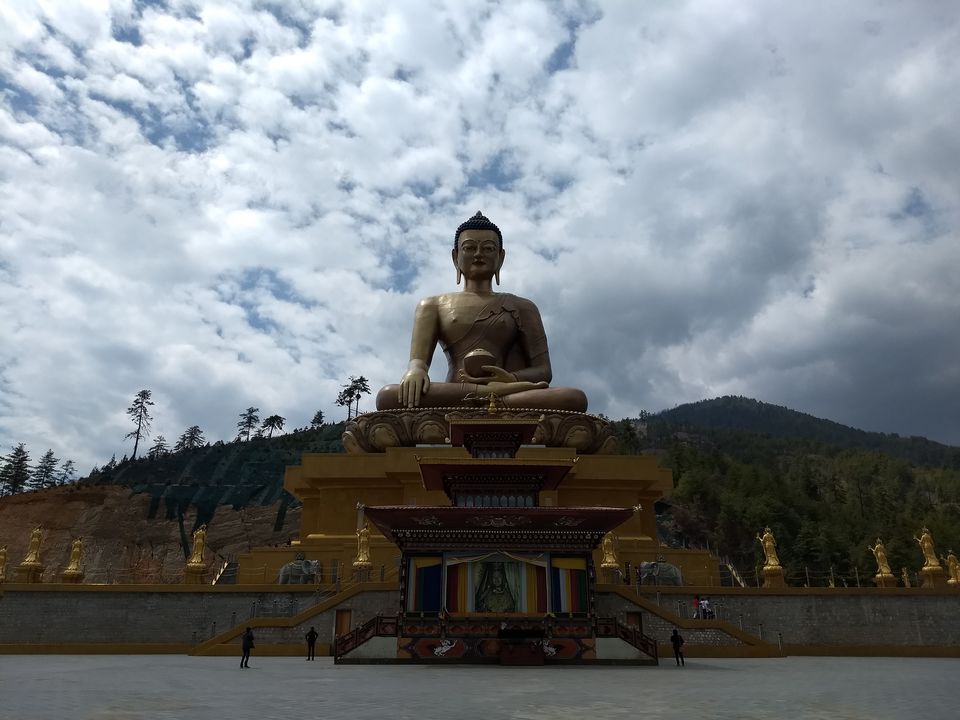 Takin is the national animal of Bhutan. Takins are only preserved in this zoo. Apart from Takins you will also find sambar deer.

Bhutanese handicrafts items were showcased in the museum. A must visit to know how ancient Bhutanese people survived in such high terrains. Local Bhutanese wine at this museum is a must try. You should also try the Bhutanese dish available at a restaurant inside the museum, especially the beef. 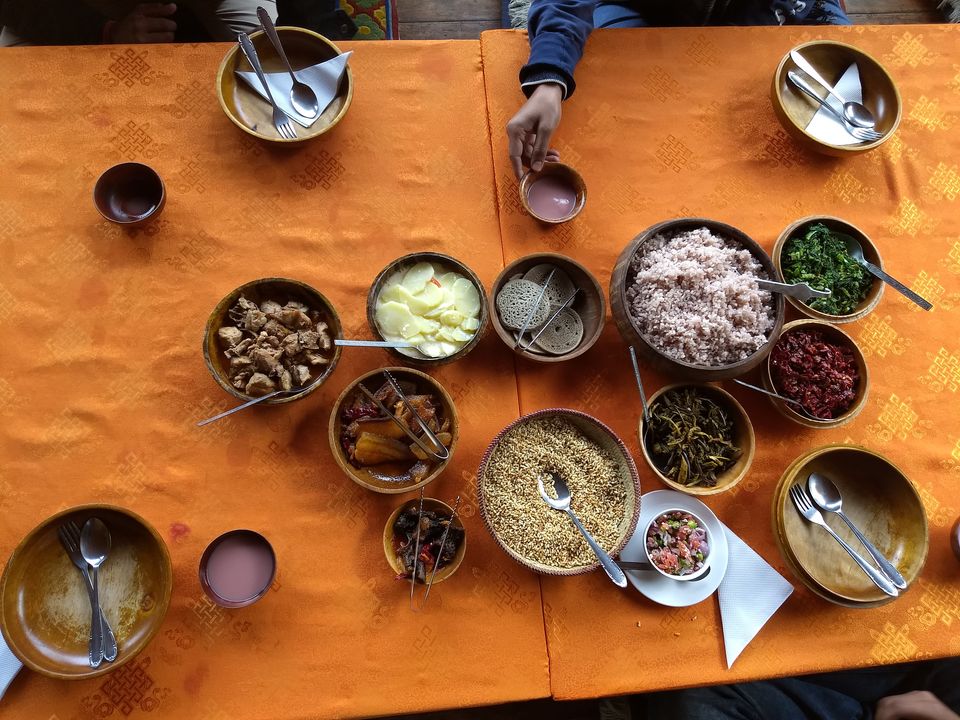 Checked out from our hotels at Thimphu and headed straight to Punakha. For Punakha, extra permit is required which will take some time. So it's advisable to leave early for Punakha.

Most of the sightseeing are on the way from Thimphu to Punakha.

The view of the Dochula pass is mesmerizing. Covered within the clouds the 108 chortens(stupas) create a heavenly atmosphere.

Panaromic view of the Dochula pass.

Located at the top of a hill, it is a must visit viewpoint from where you can view the entire Punakha. It is actually a nunnery, so you can talk with the nuns and view the nunnery from inside. 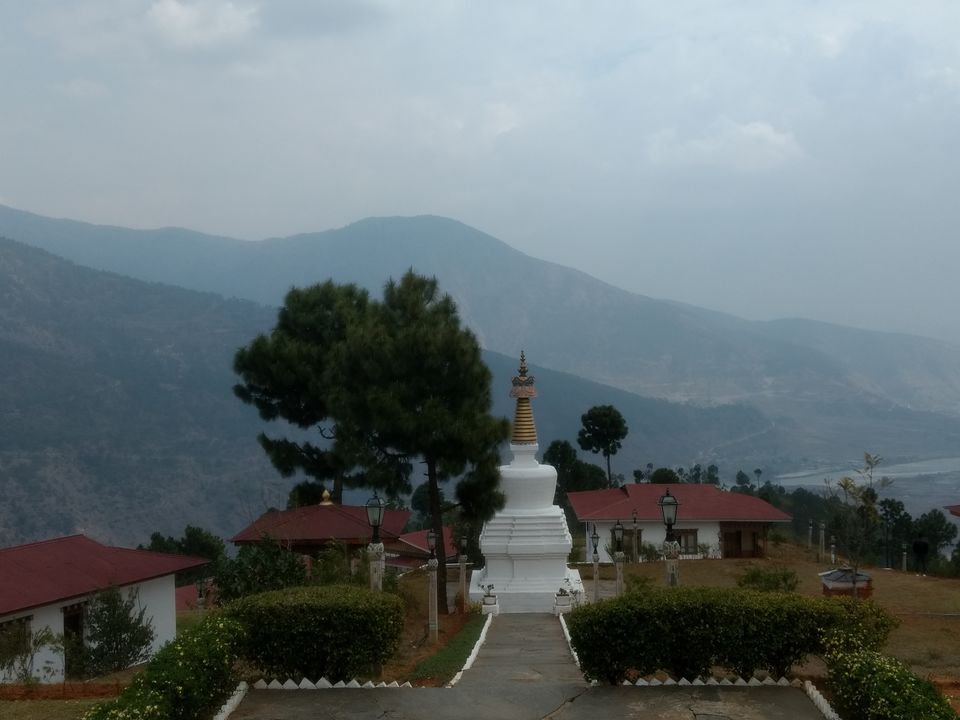 Connecting two hills, this suspension bridge is initially frightening but as you move ahead you will swing along with the bridge. If you want to get some instagrammable pictures, click pictures with the hills in background. 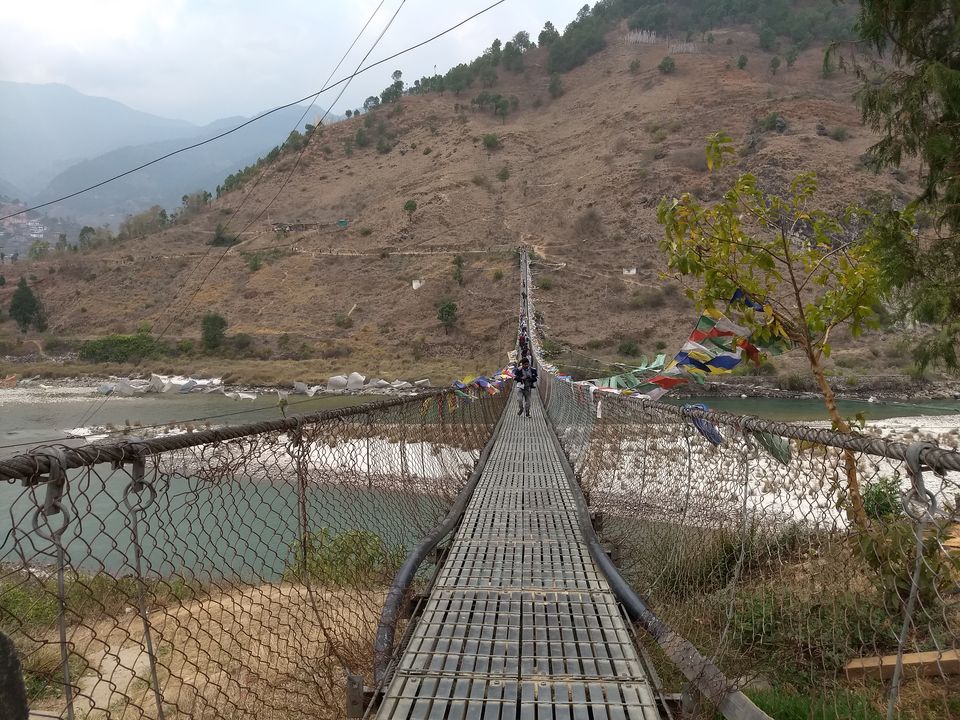 Just a few km distance from the suspension bridge is the massive Dzong(fort). You will get discounts if you are a student. A guide guides you through the fort. If you are in Punakha, the Dzong is a must visit. 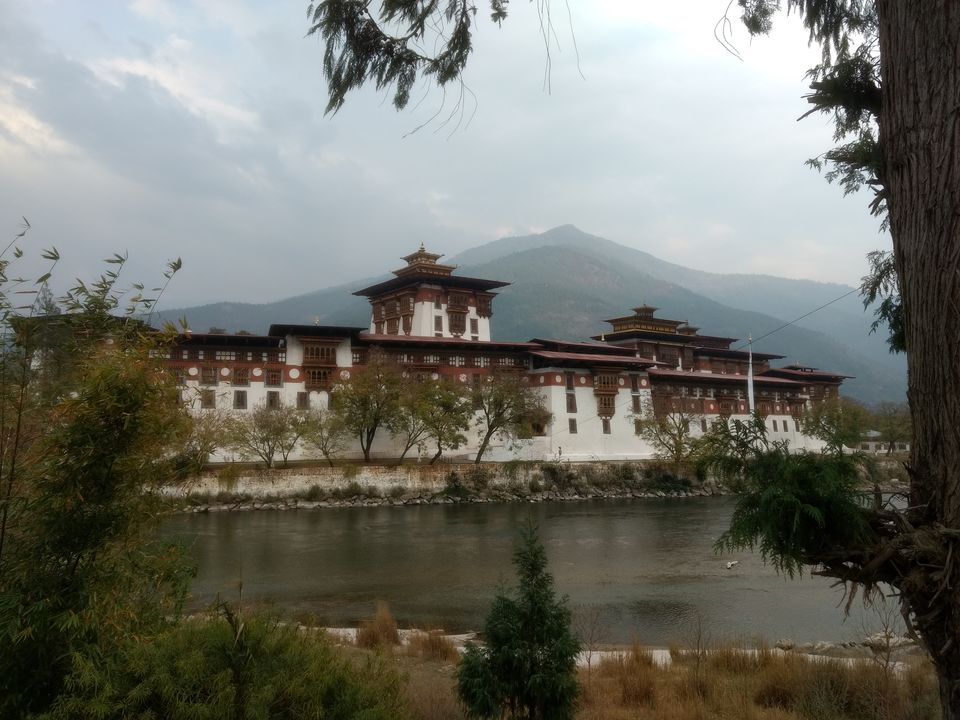 After the sightseeing we checked in our hotels and next day headed to Paro. Paro is popularly known as the airport city of Bhutan, as it has one of the most important airports in Bhutan.

If you are in Paro, visit the Paro airport viewpoint. Building an airport in such an hilly terrain is really an engineering marvel. Within the mountains the airport gives a pleasant surprise to the eyes. 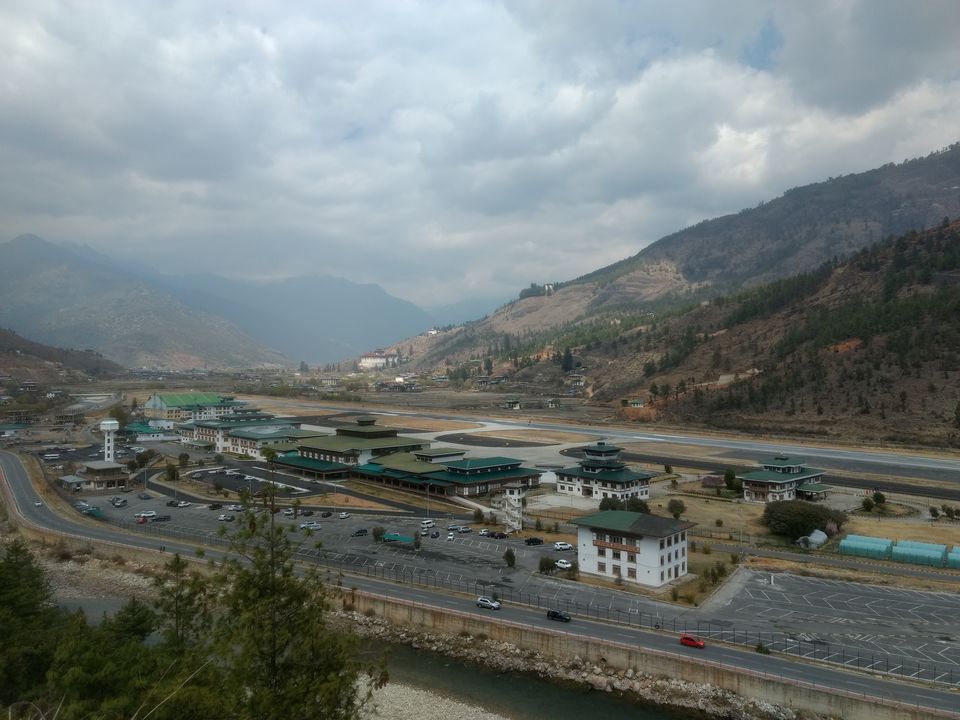 It is a must museum in Paro. You will come to know how Bhutan came to existence in this hilly terrain. It also gives a slight glimpse to the existing Indo- Bhutan friendship. It's also sort of a Paro viewpoint, so perfect for pictures with mountainous background. 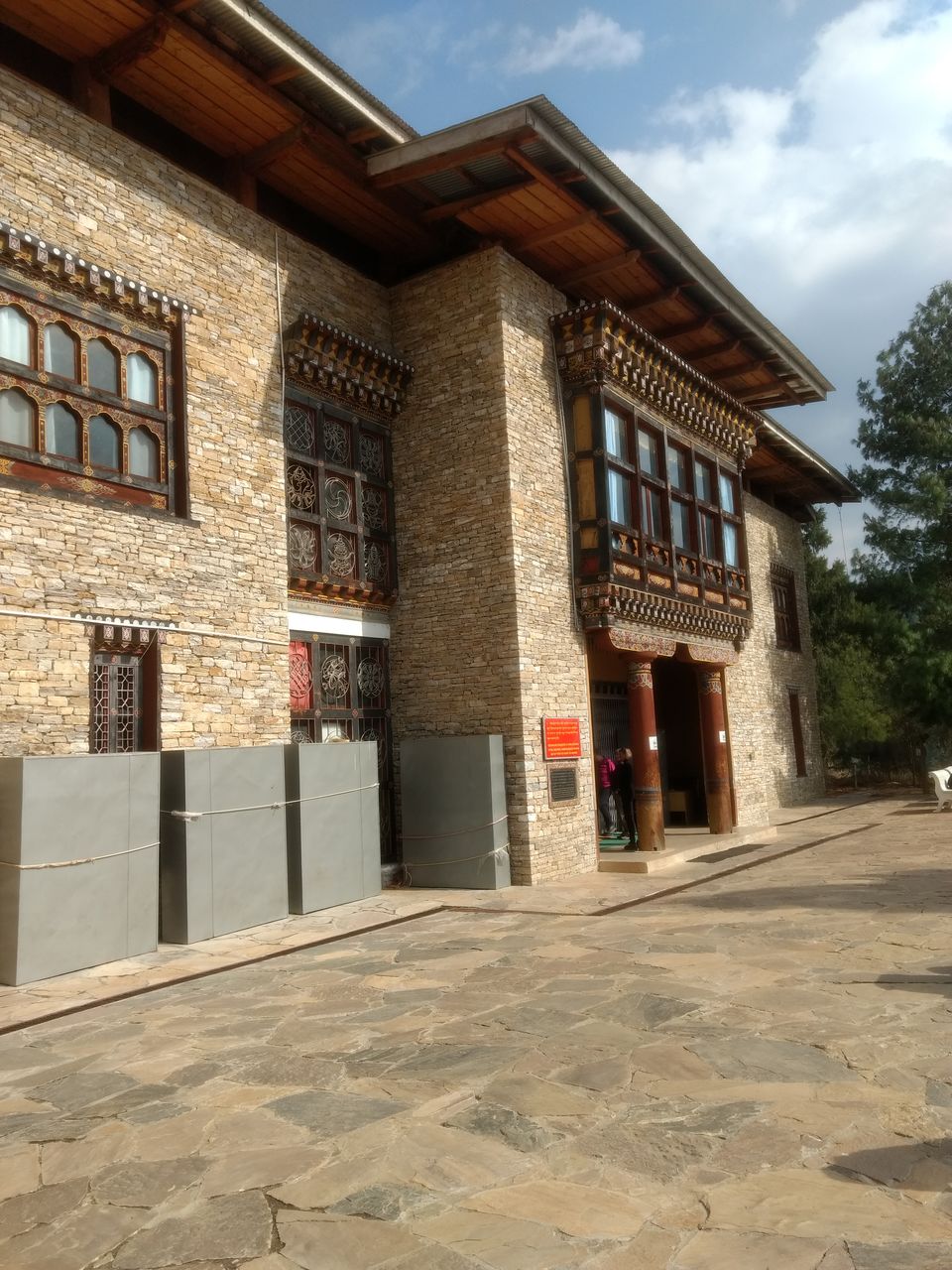 Paro viewpoint from the Ta Dzong 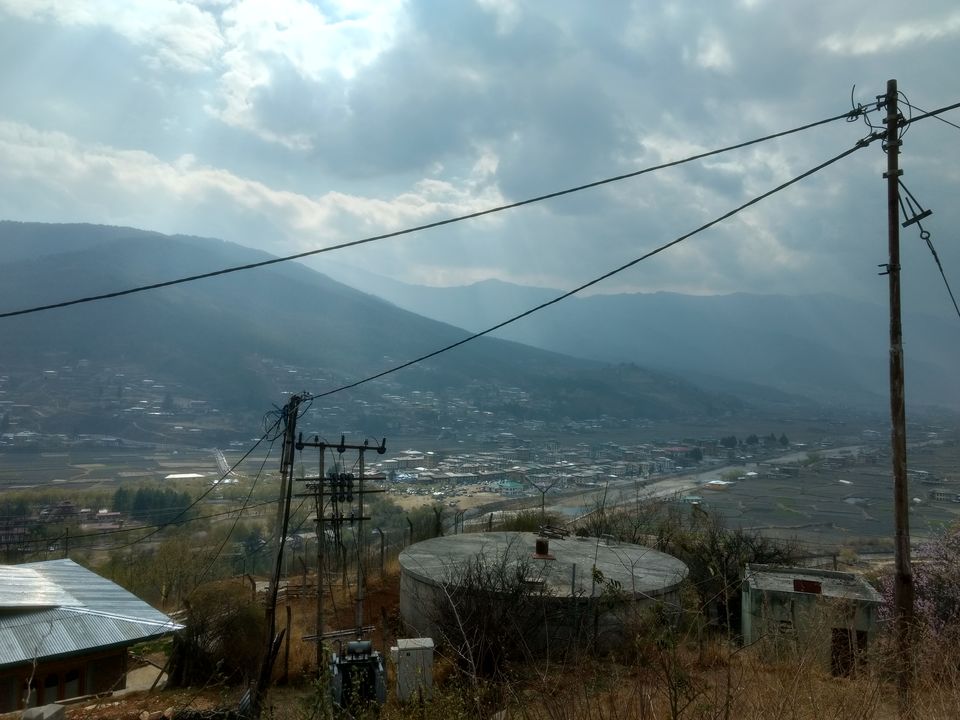 You can easily trek from the Ta Dzong to the Rinpung Dzong. Rinpung Dzong is one of the prominent Dzongs of Bhutan with rich historical attachments. Situated in a valley, the view is breathtaking.

We ended our Bhutan trip with the trekking. It's advisable to buy walking sticks, it will help in slopes. You must go for this trek as the trail is adventurous as well as there is a monastery at the top of the trail which shows how Buddhist monks meditated in that monastery. 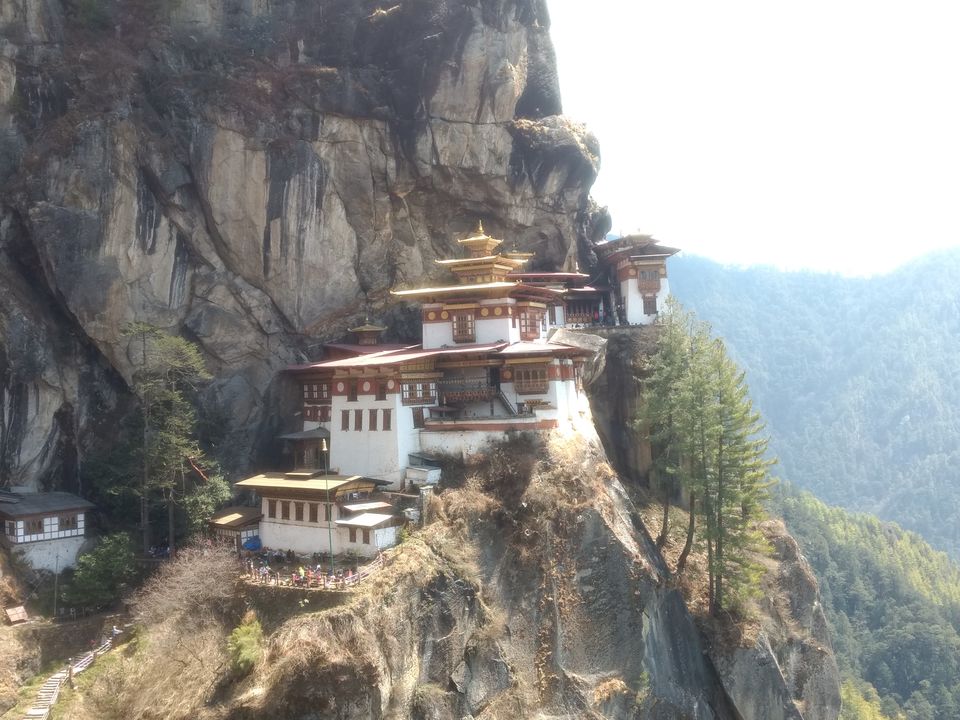 Paro's night market is a must visit. If you want to buy souvenirs for your loved ones, try to explore Paro's markets and you will definitely get one.

Some Do's in Bhutan:

1. Go for cycling in Paro. There are many cycle rentals which rent cycles at affordable prices.

2. Try Bhutanese red wine(Takin), it's much cheaper than India and tastes great.

3. You can also try Bhutanese whiskeys and Brandy(Rock bee).

5. There are a lot of karaoke in Paro and are mostly entry free. If in Paro, go for one.

6. Try the traditional Bhutanese dress. They rent it for 200 Ng.

Some Dont's in Bhutan

1. Public smoking in Bhutan is a criminal offence and they charge heavy fines. So prevent public smoking.

2. Bhutan is a monarchy country. So when in Bhutan don't do stuff which will disrepect his Highness. 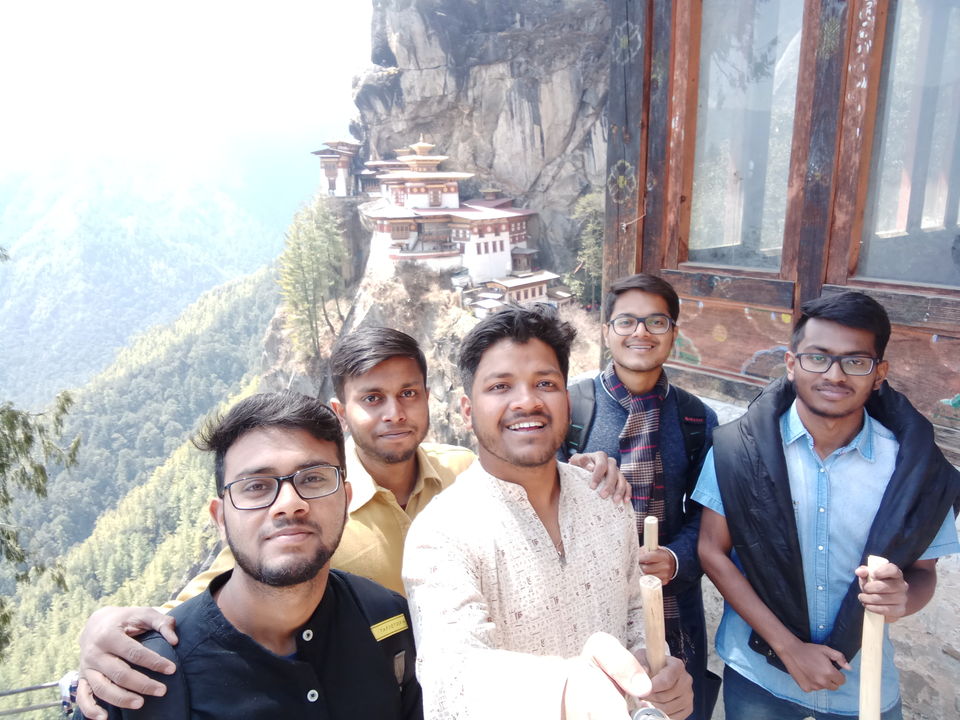