Agra is a small city in northern India and situated at 225 kilometers from India’s capital city, New Delhi. The city is famous for the Taj Mahal, built by the great Mughal emperor Shah Jahan when the love of his life i.e. his wife, Mumtaz died during childbirth. His love was so intense that he entirely made a mausoleum constructed over the grave of Mumtaz. Till date, the Taj Mahal or simply the Taj doesn’t fail to wonder the visitors and is a wonder of the world. A lot has been spoken about the Taj but what seems another important historical place, mostly remains in the shadows which is the Agra Fort. The Mughal dynasty ruled most of the vast plains of northern India from this very fort. It was in 1638 AD that the capital city of the empire was shifted to Delhi. The foundation stone of the empire started right from the Agra Fort which in its initial days was simply known as ‘Badalgarh’ which means the city of the clouds.

Here are some interesting facts about the fort, which I recently visited with my parents and our guide was highly helpful in making us go through the history of the fort and its facts and figures.

1. The strategic location of the fort was of vital importance to every dynasty that decided to take control of Agra. It was Babur, who first captured the city and built the fort. After he lost his battle with Sher Shah Suri, the fort was taken over by the Suri dynasty who ruled till 1555 AD and finally was taken back by Akbar and he made it redesigned using red sandstone. So in a period reigning from 1526 to 1556, three dynasties took control of the fort.

2. Most part of the fort is made of red sandstone. It was Akbar who had a fantasy for red walls and architectures made of sandstone. He brought some 4000 plus premium sandstone from the quarries spread across northern India to build the fort as he wanted.

3. Upon entering the fort from the southern gate, visitors can see a 60-degree inclined walkway to move up to the main complex of the fort. However, it was made 60 degrees inclined so that during the siege the enemy elephants and horses can’t climb with great efficiency. Moreover, super heated oil used to be poured down so that the entrance gets jammed. This indicated brilliant usage of science and architecture of those times.

This is the area of 60 degree inclination. Hot oil used to get poured along the walls. The marks are easily spotted in the picture. 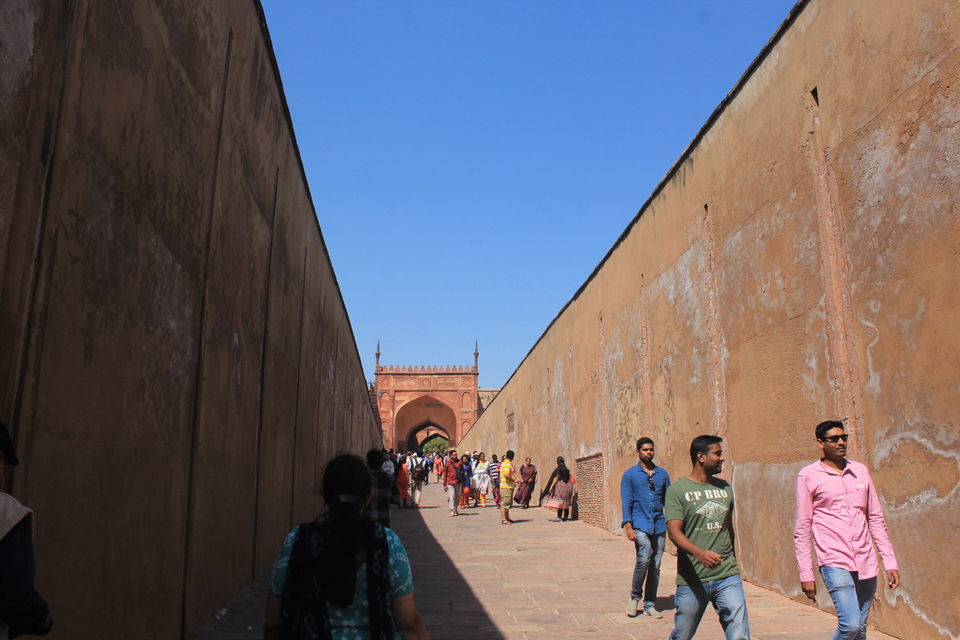 4. Agra Fort was the symbol of power, strength, and resilience of those times. The fort runs parallel to the Yamuna river and the moat, till date, remains connected to the river. Mighty gates around the fort in its four directions, made it highly impregnable of those times.

5. The fort shows us a classic example of the lavish lifestyle of the Mughal kings. The Sheesh Mahal, made of Belgian glass, was of vital importance to the recreational activity of the Mughal kings. Although it is now closed for the visitors, but legends say that lighting a candle in one corner of the room would light up the room in numerous ways and the light rays criss-cross each other in a magnificent way, credits to the angular positioning of the glass.

6. Although it shows and is a classic example of Islamic architecture, but the fort has a separate section for Hindu temples and places where Hindu people would worship their gods. It was since Akbar’s wife, Jodha Bai, was a Hindu, so Akbar out of love and loyalty and faith in his kingdom had made Hindus equally accessible to the benefits of the fort. This certainly strikes a classic symbol of humanity, devoid of religion and its conflicts.

Hindu domed temple, much like the princely states of Rajasthan, inside the Agra Fort. 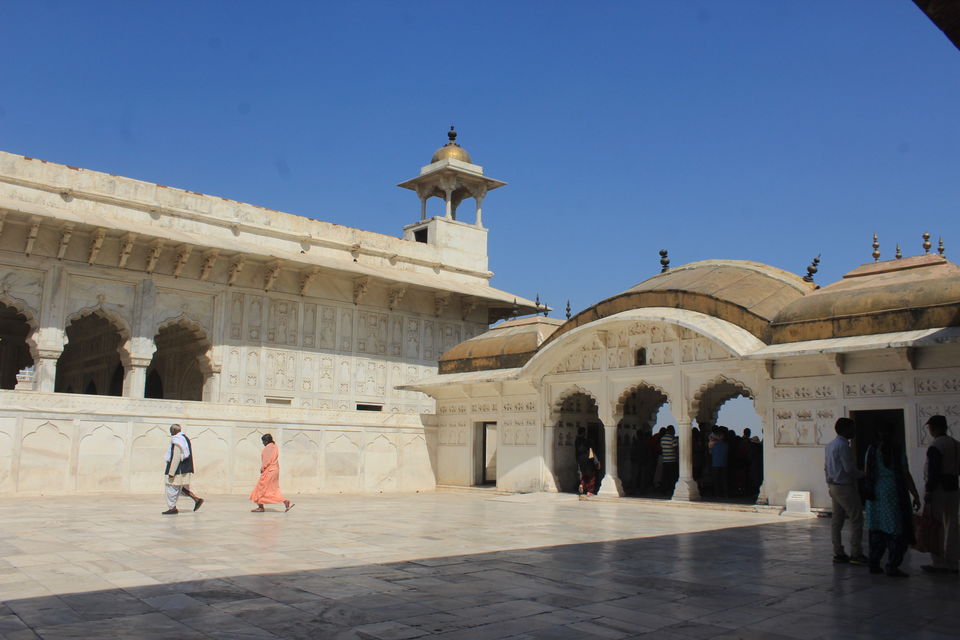 7. Today, much of the fort is covered in white marbles. It was Akbar’s son, Shah Jahan, who had an ever longing desire for palaces in pure white color, brought the white marbles from the various region in India and Iran and made the vital section of the fort reconstructed.

8. During the reign of Shah Jahan and Akbar, vital dignitaries from far-flung areas of the world used to visit the fort. A special section for such meetings of importance was made and it was called the Diwan-E-Khas. The fort was also the center of Islamic learning and literacy and was flocked by preachers and teachers from the Middle East and Central Asia.

9. The location of the fort is of such strategic importance that 80% of the fort, as of now, is under the control of the Indian Military and is closed to the public. So from this, we can clearly imagine on what basis the fort was built at that time.

The Taj Mahal, as seen from the Agra Fort 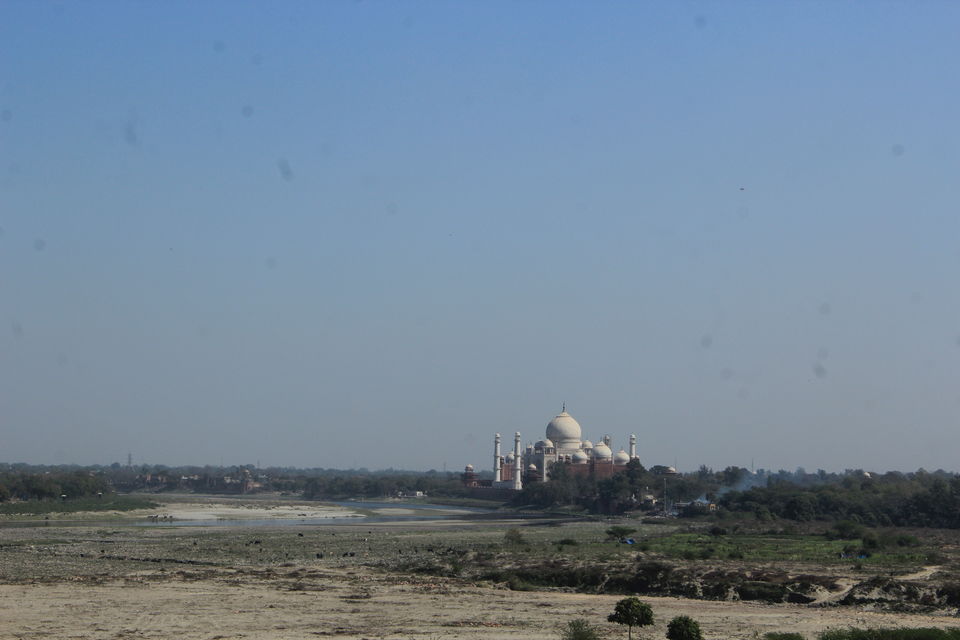 10. Agra Fort was plundered and looted by various dynasties once the Mughal power started to weaken. It was Shah Jahan’s famous peacock throne that had the world famous Koh-i-Noor diamond. It was Nadir Shah, a great Persian ruler who had an eye for the diamond. He attacked the fort and plundered and looted the throne and along goes the diamond from India to Persia and finally in the hands of the British.

11. Agra Fort is much devastated till date. The gold and ruby plated walls, gems embedded on them and all the luxurious and lavish Mughal decorations was dismantled and looted by the Britishers. Selling these items to traders the British started to gain money and supremacy over the region. Had those not been looted and plundered, the fort would have been a striking marvel, far more beautiful than the Taj Mahal. 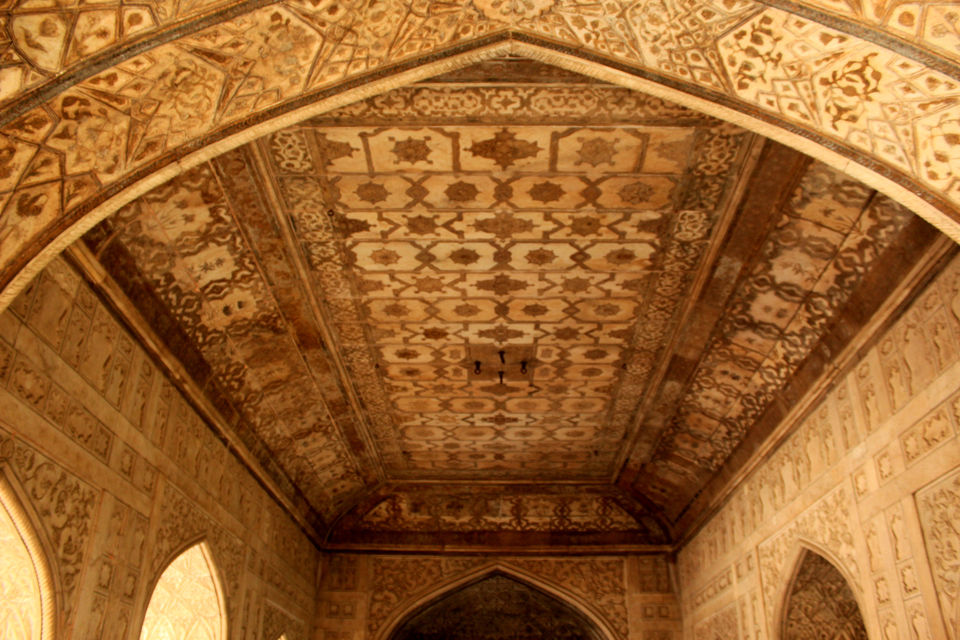 Located 3kms upstream from the Taj Mahal, the fort can be reached by rickshaws at a very nominal fare. It took us 40 rupees to reach to the fort and the Taj Mahal and Agra Fort can be covered in a single day. So we hired a cab and it costed somewhere around 5000 rupees for the entire trip. If anyone is in New Delhi and doesn’t make a trip to Agra then certainly the traveler is missing a vital piece of Indian architecture. Nothing is complete if the Taj Mahal is not visited. So here it is. 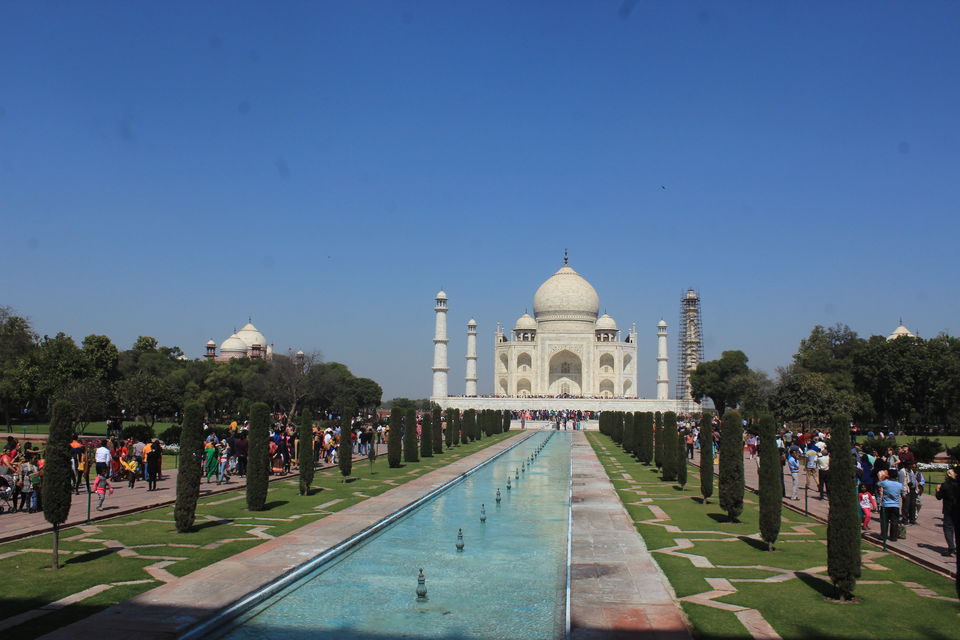