Agra: Alluring legacy of an empire

Lives of most of us revolve around two words – Assignments and Deadlines. From July 2015 to March 2016, my life too revolved around these two words. The seven-month roller coaster ride had brought its share of happiness and cheer but these were also the seven months when I had cried as if there was nothing worse that could happen.

By the time the seven months ended, I had learned new things, forgotten what a social life looked like and had picked-up bad habits, but I was again in a very happy space. But then when has life gone as we had planned it. Just two days later I was supposed to enter the ‘big bad world’. New jobs and its responsibilities were glaring down at me and I was yet again to be consumed in the rut of cabins, stricter deadlines and horrible timings. All I had were two days before I was to be trapped behind beautiful glass walls, a fancy computer and a boring desk.

Like any typical Delhiite, my impromptu plan was to rush to Agra for a two-day getaway. However, the plan was not driven by the Delhiite in me but by the Mughal fanatic that had been in hibernation for four long years.

In a quest to re-explore the architectural magnificence and numeral tales of Agra I started my car ignoring my parents’ fear of letting a girl alone in a city “as dangerous as Agra”.

With 520 kilometres to travel and nine places to visit in a span of 46 hours, my car touched the gear at 2.30pm. The distance of 210 kilometres from Delhi to Agra passed smoothly and I was soon welcomed by the City of Taj. It welcomed me with the two things I wanted – beautiful architecture interwoven with numerous tales and the feeling of not knowing a single human face around me. It was liberating.

The imposing Agra Fort is home to numerous tales and distinct styles of architecture. The construction of this imposing structure was started by Emperor Akbar but was finally finished by Shah Jahan. The light and sound show is a must and for best experience get a sherpa or an audio tour. 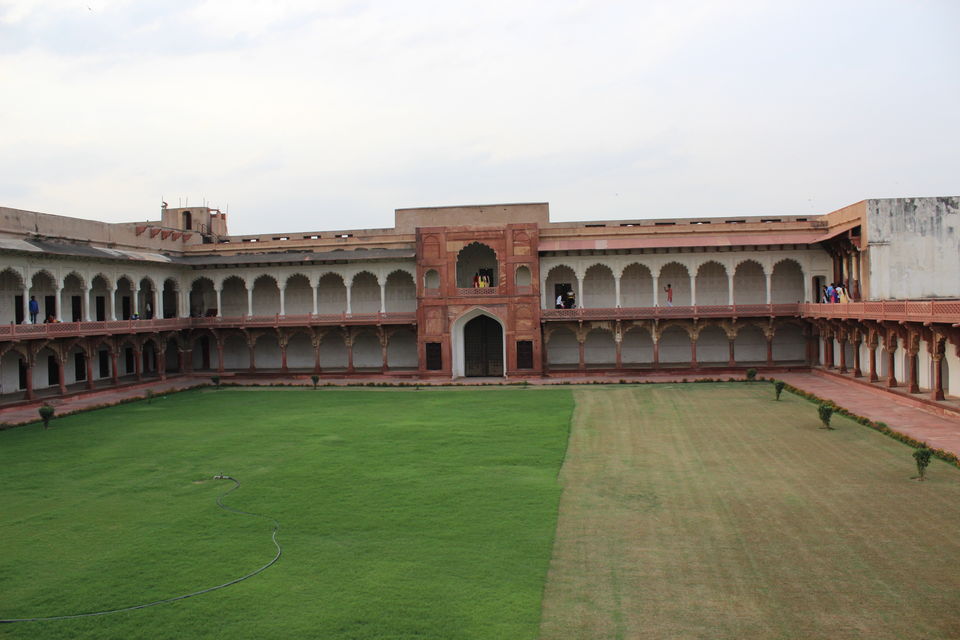 The short-lived capital of the Mughal empire, Fatehpur Sikri is a fortified city that was once the abode of Akbar and this three queens. A sherpa or an audio tour is a must here too. 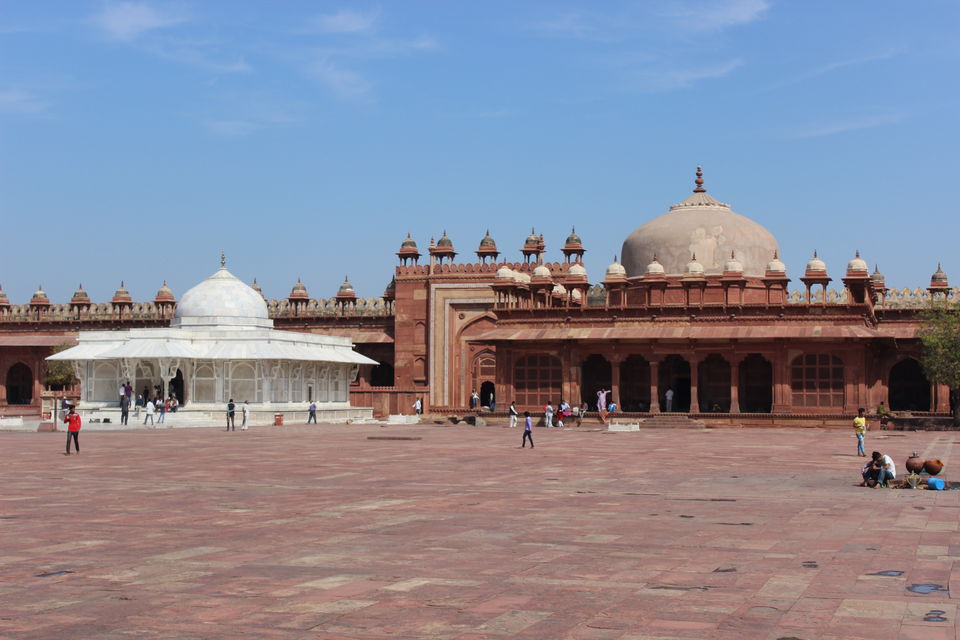 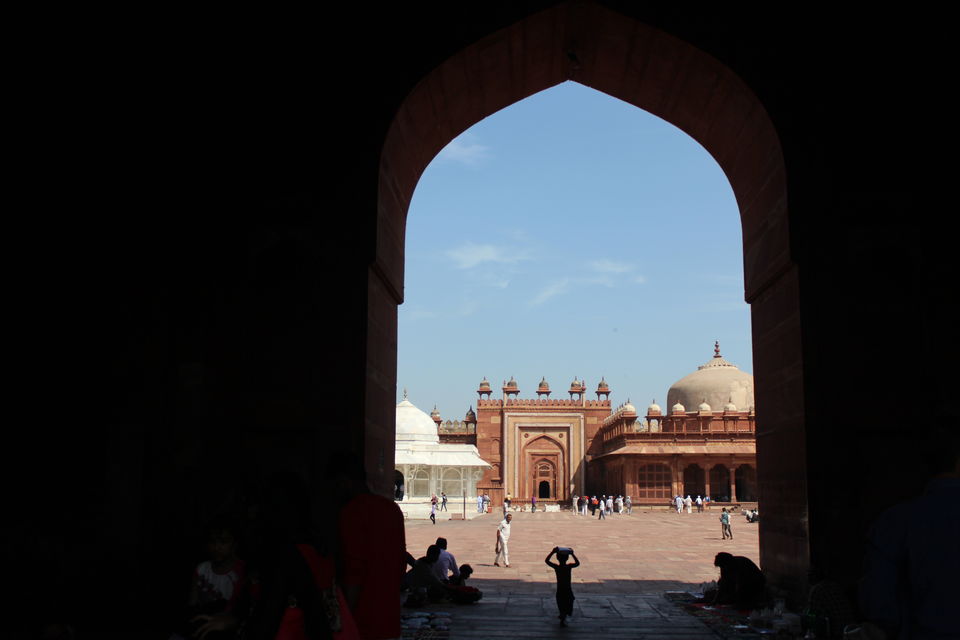 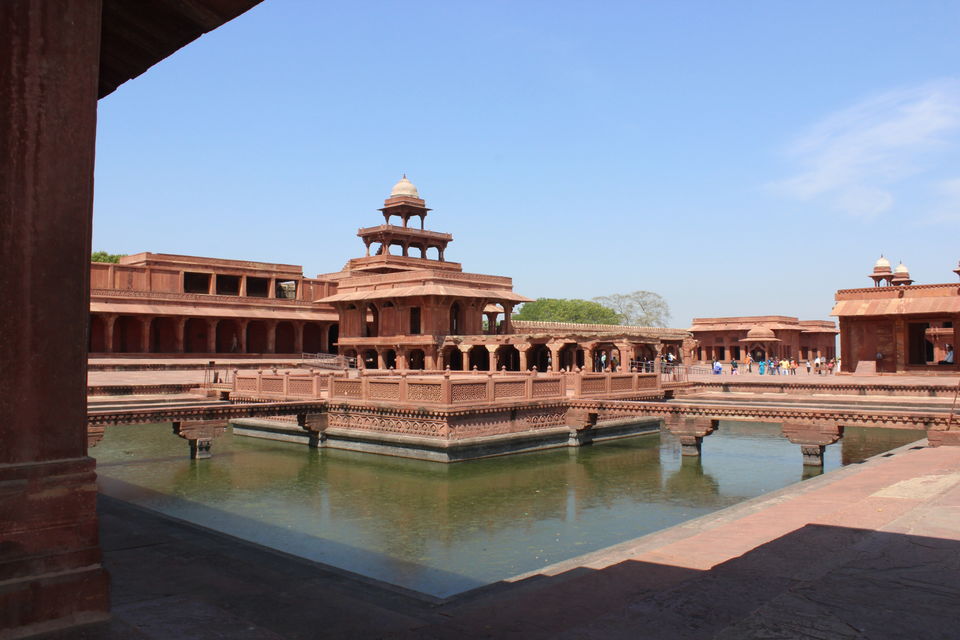 Commonly known as Baby Taj, Itmad-ud-Daula is the mausoleum of Nur Jahan's father Mirza Ghiyas Beg. The delicate white structure on the bank of Yamuna bearing intricate carvings and lattice work, is said to be the inspiration behind the Taj Mahal. 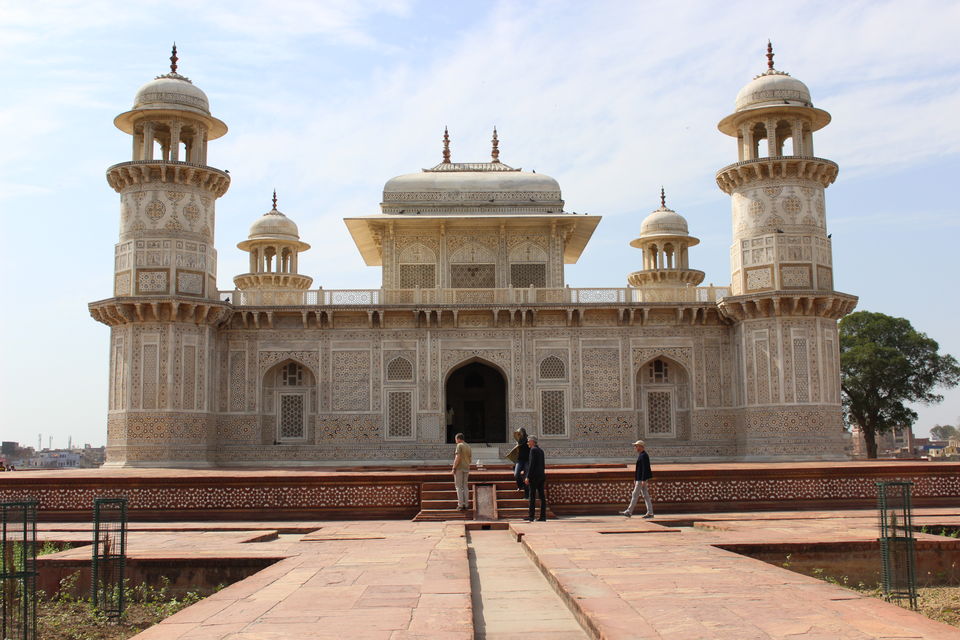 The mausoleum of the greatest emperor of the Mughals, Akbar, Sikandra is a red sandstone structure that has geometric white marble work. 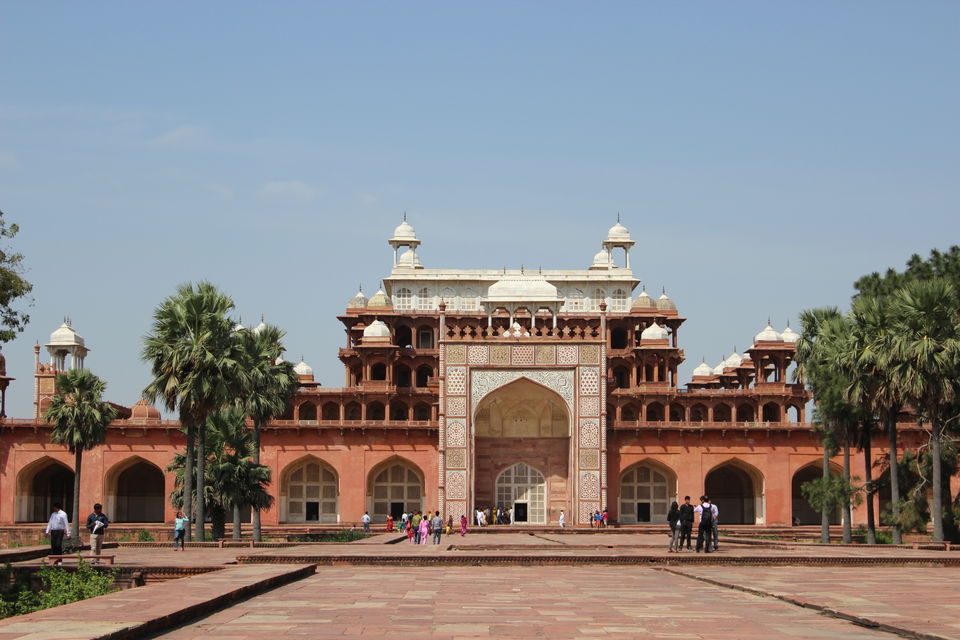 The most beautiful building in the world, Taj Mahal is the epitome of love that immortalized Shah Jahan and Mumtaz. Thousands flock to the heritage sight to marvel at its beauty and seldom leave disappointed. 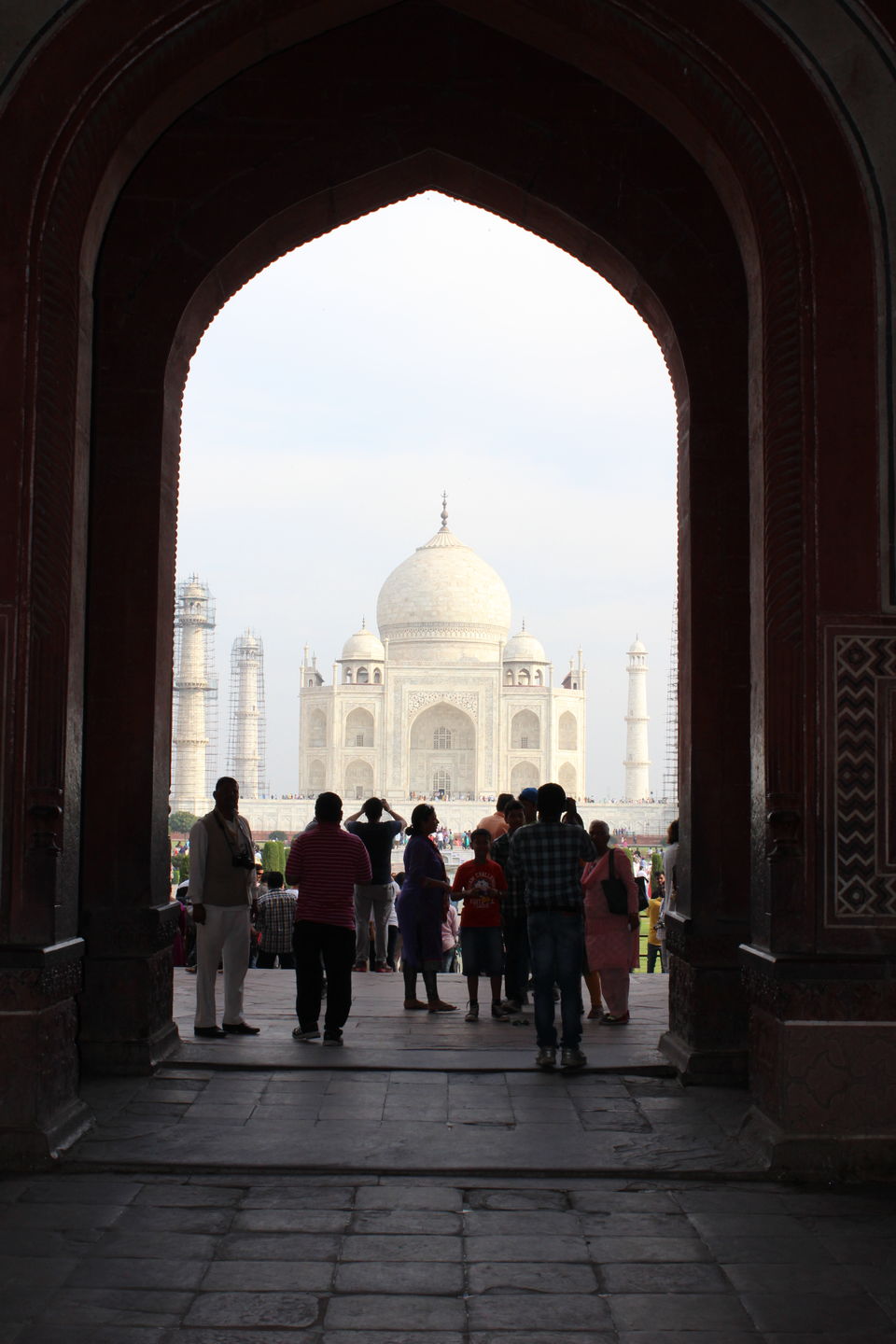 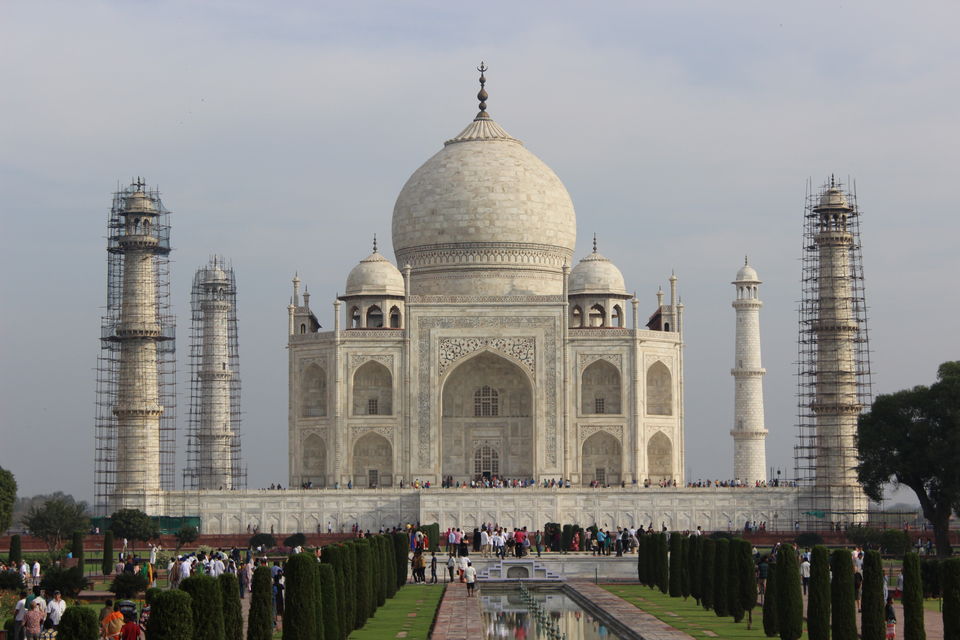 With just 43 hours left in my hand, I decided to step on the pedal before losing more time and headed for the live cultural extravaganza ‘Mohabbat – The Taj’ at Kalakriti. Depicting the love saga of Shah Jahan and Mumtaz, the dance drama beautifully captured the grandeur of the Mughals and concluded with the largest replica of the Taj Mahal emerging slowly from beneath the stage by a hydraulic lift.

Filling my stomach with as much food as I could, my second day started early as I headed to Fatehpur Sikri. Built by Emperor Akbar, Fatehpur Sikri is 51 kilometres from Agra and was the alternate capital of Mughals but the short-lived capital had to be abandoned soon after Akbar’s death due to water issues.

The fortified town is the home of a stunning white mosque nestled between the red sandstone walls, the iconic Buland Darwaza and the palaces of each of Akbar’s three wives – one Hindu, one Muslim and one Christian.

After bidding farewell to my wonderful Sherpa, my destination next was Sikandra, the sandstone tomb of Akbar. The resting abode of the greatest of Mughal emperors, Sikandra has three sandstone minarets with intricate geometric designs made from white marble and spotting a deer in the lush green lawns is not rare.

Stepping from one mausoleum to another, I was soon standing at Itmad-ud-Daulah, commonly known as Baby Taj in Agra. Built by Nur Jahan, wife of Jehangir, for her father Mirza Ghiyas Beg, the mausoleum, though not as majestic as Taj, is a delicate structure with intricate marble lattice screens.

As per history books, one could catch a glimpse of the Taj from the mausoleum but thanks to urbanisation, all you can see now is the drying Yamuna, multiple bridges, webs of wires and ugly urban structures.

As the clock struck 4pm, visiting Taj seemed like a horrible idea but with almost 24 hours gone since I had stepped into Taj city, my desperation to catch a glimpse took me to Mehtab Garden. Even though not as picturesque as I imagined it to be, Mehtab Graden was a nice break from all the rut of the city and the stone structures. Giving a magnificent view of the Taj without all the rush, the garden also holds some remains pieces of black marble that had been laid by Shah Jahan for the construction of his mausoleum – A black Taj.

As my stomach growled by now, I headed to Sheroes for a refill. If you want luxurious food, it might not be the best place to go but do go here for the commendable women who run the café and to support their cause. Run by acid attack survivors, Sheroes also comes with a unique concept of pay-as-you-want. Located at Taj Ganj, the pasta and cold coffee here is amazing.

With refilled stomach and renewed energy, I was soon standing in front of the massive and imposing Agra Fort. The construction of one of the finest fort of India was started by Akbar, continued by Jehangir and finished by Shah Jahan. The fort has several stories hidden in it. While the parts constructed by Akbar and Jehangir are of red sandstone, construction by Shah Jahan is distinguishable in striking white. Completed by Shah Jahan, the fort was also the prison of the emperor for eight years.

The places to see within the fort are Diwan-i-aam (Hall for public audience), Diwan-i-khaas (Hall for private audience), Angoori Bagh (Garden where grapes were cultivated to make wine), Moti masjid, Nagina masjid, now-closed Meena Bazaar (Ladies Market), Shish Mahal (Hall of mirrors) and Khas Mahal (the tower where Shah Jahan was imprisoned and from where he used to see the Taj).

At last the light and sound show at Agra Fort keeps all gripped as the grief of Shah Jahan resounds in darkness through the voices of trained actors. The light variations beautifully depict the marching of armies and the tale of Kohinoor.

Today was the day I was finally headed to see the Taj. Skipping breakfast to reach really early, I made my way to Taj Ganj. Despite the hype, Taj is what you imagine it to be and more. Glistening with the dewiness of early morning, the white structure that has been attracting millions stood true to its name. The perfection of the monument that immortalised Shah Jahan’s love for Mumtaz is evident in the sheer numbers that come to see this beautiful structure. As I stand there I also wonder the sight it must be to visit the Taj on a full moon list (on my bucket list for sure).

It had been 46 hours since I had started and I was back in the comfort of my bed but the trip lingered on my mind. Though Agra had welcomed me with its dusty charm, it was not the same chaotic city I remembered from a few years back. With the opulent red-white structures, splendour of gardens and the transcendence and purity of Taj, Agra gets etched on your mind and heart to never fade away again.