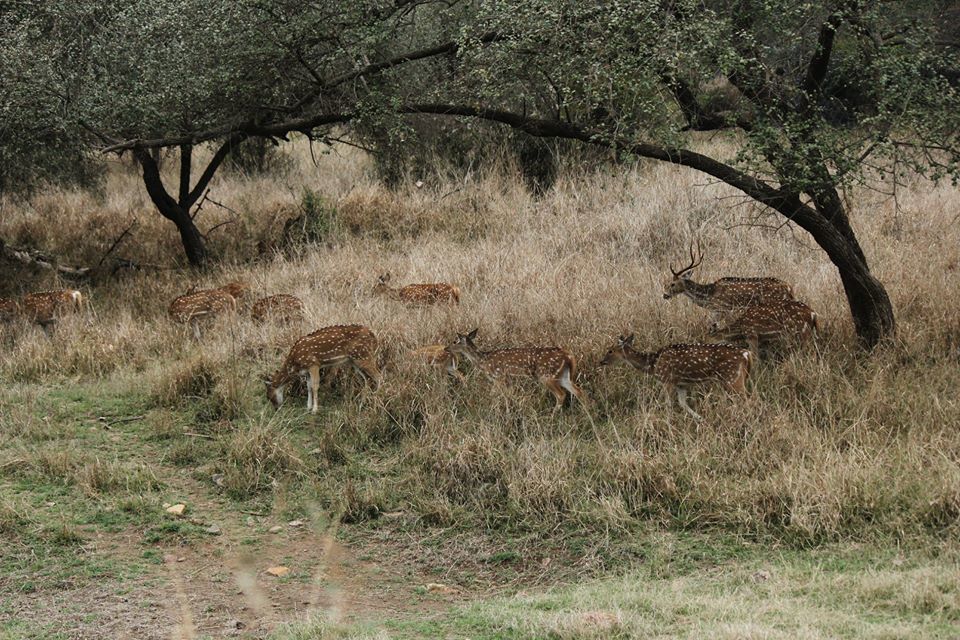 Sariska is one of the most visited parks in India. Unfortunately though, the main reason for this is not wildlife enthusiasm but only it's excellent proximity to some large towns like Delhi and Jaipur. The park was, as with many other parks, the hunting reserve of the royal family in the area. In this case, it was the Royal family of Alwar Rajasthan. The reserve was declared a wildlife sanctuary in 1958 and came under the "Project Tiger" as a Sariska Tiger Reserve in 1979. The park covers quite a large area of 800 square kilometers, 480 square kilometers of which form the core area of the national park. It is located among the Aravalli hill ranges in the Alwar district of Rajasthan. Due to the presence of monuments of religious importance located within the park boundaries, the park authorities are compelled to keep the park open throughout the year. The summer months are better for animal viewing but are extremely hot with temperatures going up to as high as 49 degrees centigrade. In the winter months, the temperature touches a low of 4 degrees.

Although larger than Ranthambore, it is less commercialized and has less tigers but a similar topography. It covers an area of 800 sq km in total, with a core area of approximately 500 sq km. The Northern Aravali Hills dominate the skyline with their mixture of sharp cliffs and long narrow valleys. The landscape of Sariska comprises of hills and narrow valleys of the Aravali hill range. The topography of Sariska supports scrub-thorn arid forests, dry deciduous forests, rocks and grasses. The broad range of wildlife here is a wonderful example of ecological adoption and tolerance, for the climate here is variable as well as erratic.

Sariska National Park is home to numerous carnivores including Leopard, Wild Dog, Jungle Cat, Hyena, Jackal, and Tiger. These feed on an abundance of prey species such as Sambar, Chitel, Nilgai, Chausingha, Wild Boar and Langur. Sariska is also well known for its large population of Rhesus Monkeys, which are found in large numbers around Talvriksh.

Sariska Tiger Reserve is open for private vehicles on Tuesday & Saturday only, As famous & ancient temple of Lord Hanuman [ Pandupole] is located in side of Sariska tiger Reserve . But private vehicles cannot leave main road to Pandupole and cannot enter off roads made for open gypsy safaris.

The nearest main town to Sariska is Alwar (36km).

The nearest Airport to the park is located at Jaipur (110km)

It is also possible to go via the main Jaipur highway, by which the distance gets extended to approximately 240km. From Jaipur, Sariska is Approx. 110 Km.

Visitors can visit Sariska wildlife sanctuary throughout the year, still the best period is during the months of October to June.